Title page of the autograph of Sarasate’s Carmen Fantasy.

To this day, the success of a new stage work crucially depends upon whether the individual scenes, ensembles or songs stick so strongly in the mind as catchy tunes that they become earworms. The persistent popularity of Georges Bizet’s Carmen undoubtedly owes a great deal to such of its easily-remembered numbers. Its première in the Paris Opéra-Comique on 3 March 1875 and the run immediately afterwards did not bring the great hoped-for success, but from the autumn of 1875 an unprecedented triumphal procession over European stages began – which, though, Bizet, who died three months after the première, was no longer alive to experience.

From the outset, Habanera, Carmen’s entrance song “L’amour est un oiseau rebelle” (“Love is a rebellious bird”) was amongst the opera’s most popular numbers. So it is no wonder that Pablo de Sarasate prominently put it as No. 1 after the Introduction in his Carmen Fantasy, composed for violin and piano (or orchestra) in 1881. At any rate, Sarasate chose numbers that were especially responsible for the Spanish colouring of Bizet’s opera – and the absence of Habanera would probably have been all the less likely since its melody goes back to an original Spanish song, to Sebastián de Iradier’s El arreglito. (In the 19th century El arreglito was just about as popular as Iradier’s second great song success, La Paloma, would become in the 20th century.)

In his opera fantasies Sarasate usually worked according to the theme-and-variations model. So, he had the number begin almost literally like the original, adding to it only appoggiaturas and enlivening the quaver triplets by dropping the middle note an octave:

After the change from d minor to D major (as of measure 20), Sarasate varied the theme by embedding the chromatically descending melody in double and triple stops.

In preparing the recently-published Urtext edition of the Carmen Fantasy, Augustin Hadelich, who advised on the solo part, brought to my attention the fact that in this passage (measures 20–28) violinists would frequently play a cantabile counter melody to the theme repeated in the piano or orchestra, that is, the melody from Carmen’s repetitions of the crucial word “L’amour” in Bizet’s original, simply lengthening the duration of the tone and placing it an octave higher. Although I had noticed this variant, I had, as it turned out, underestimated how widespread it was.

Popular variant for the violin in Sarasate’s Carmen Fantasy, part I, measures 20–28.

This does not show up in either the manuscript or the printed sources for the Carmen Fantasy; it certainly does not come from Sarasate himself. How and when, then, did it enter into Sarasate’s composition? Upon examining other violin fantasies on Bizet’s Carmen, I soon came across Franz Waxman’s Carmen Fantasie for violin and orchestra, composed in 1946, which also deals with Bizet’s Habanera and transits to D major, using the counter melody in question:

Waxman (actually, Wachsmann), originally from Germany, made his name in the US in the 1930s and 1940s as arranger and film composer. The fantasia on Carmen themes composed as part of his music for the film Humoresque is one of his best-known works, popularised especially by Jascha Heifetz who played it over the radio and in concerts. It seemed obvious that Heifetz must also have effectively incorporated this melody within the classic of the Carmen arrangements, in Sarasate’s Carmen Fantasy.

Fellow Henle editor, Ray Iwazumi (Juilliard School), who is very familiar with the American violinist scene, dismissed, though, my surmise with good arguments: “The problem with this hypothesis is that it’s not too difficult for any creative musician who knows the original opera to make this leap of substituting ‘l’amour, l’amour’ in this passage – it comes straight from a very memorable melodic gesture sung by the heroine.”

Be that as it may: The question arose as to how we should deal with it in our Sarasate edition. The substance of the Urtext idea is to free the music text of all extraneous alterations or additions – which would actually exclude this extrinsic variant. The prevalent practice cannot, though, be entirely blocked out, for a violin student using an Urtext edition is likely to be confused at not finding any reference whatsoever to a variant that is known from numerous recordings.

Here, we have a special situation in that a kind of meta-editing has occurred in the replacement of Sarasate’s original music text by an arrangement that is closer, curiously enough, to the original Carmen text than Sarasate’s composition is. Whereas Sarasate ignored Carmen’s melodic counterpoint, since his interest was focused on virtuoso variations of the underlying theme, this passage maintains Bizet’s basic conception, since the right hand in the piano retains the theme (= chorus in the opera), whilst the violin superimposes the cantabile gesture (= Carmen’s song).

We ultimately decided to include the frequently played variant as an ossia, whilst making it clear in the comments that this does not go back to Sarasate: 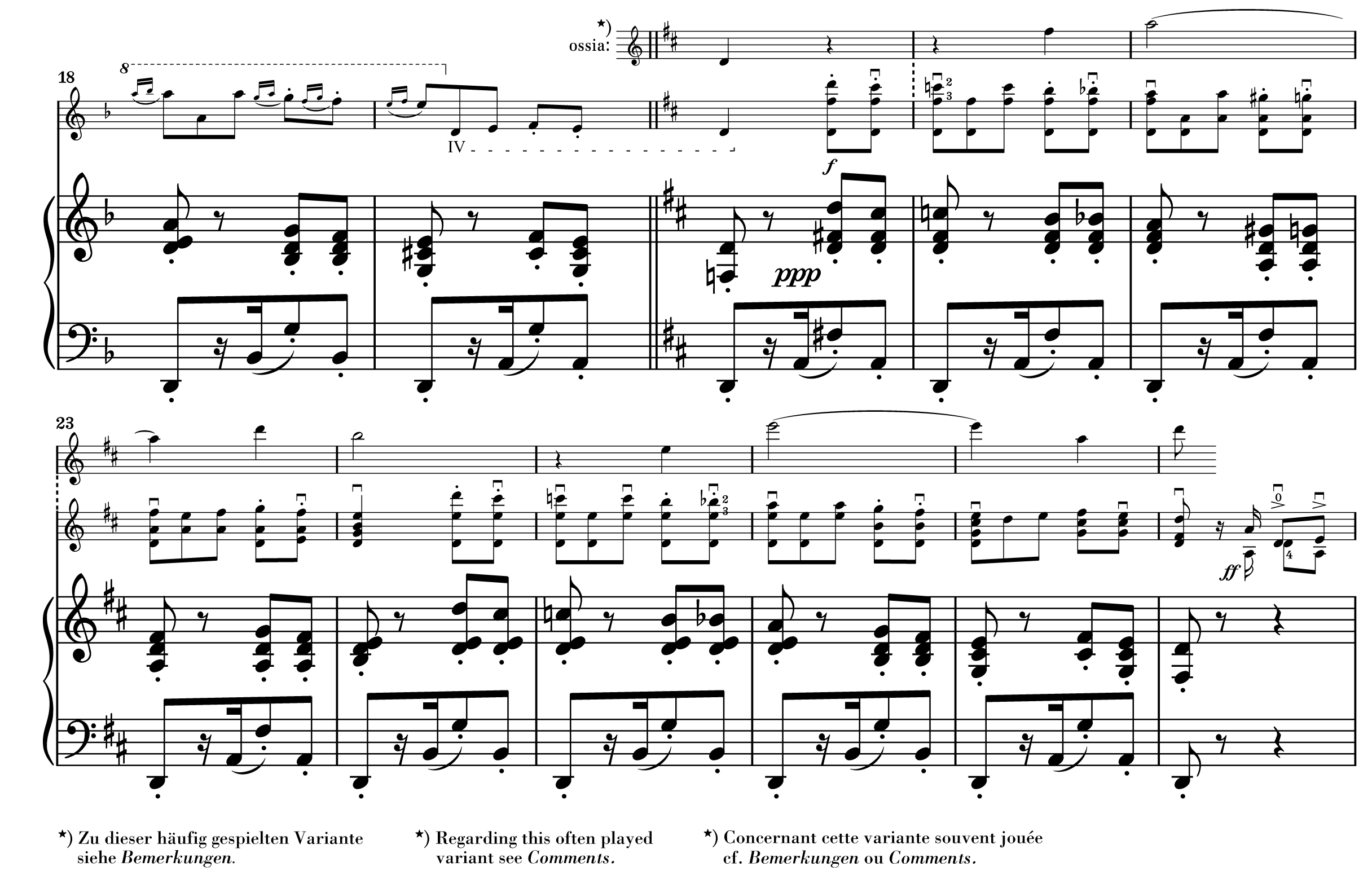 It remains to be seen which is the more beautiful arrangement, that with Sarasate’s original music text or that with the Carmen variant. Here, in closing, is the evidence from the relevant recordings:

Original with Ingolf Turban (Habanera from 2’52”)

Variant with Augustin Hadelich (Habanera from 2’48”)

3 Responses to »Is that still Urtext? On an often played variant in Sarasate’s “Carmen Fantasy”«