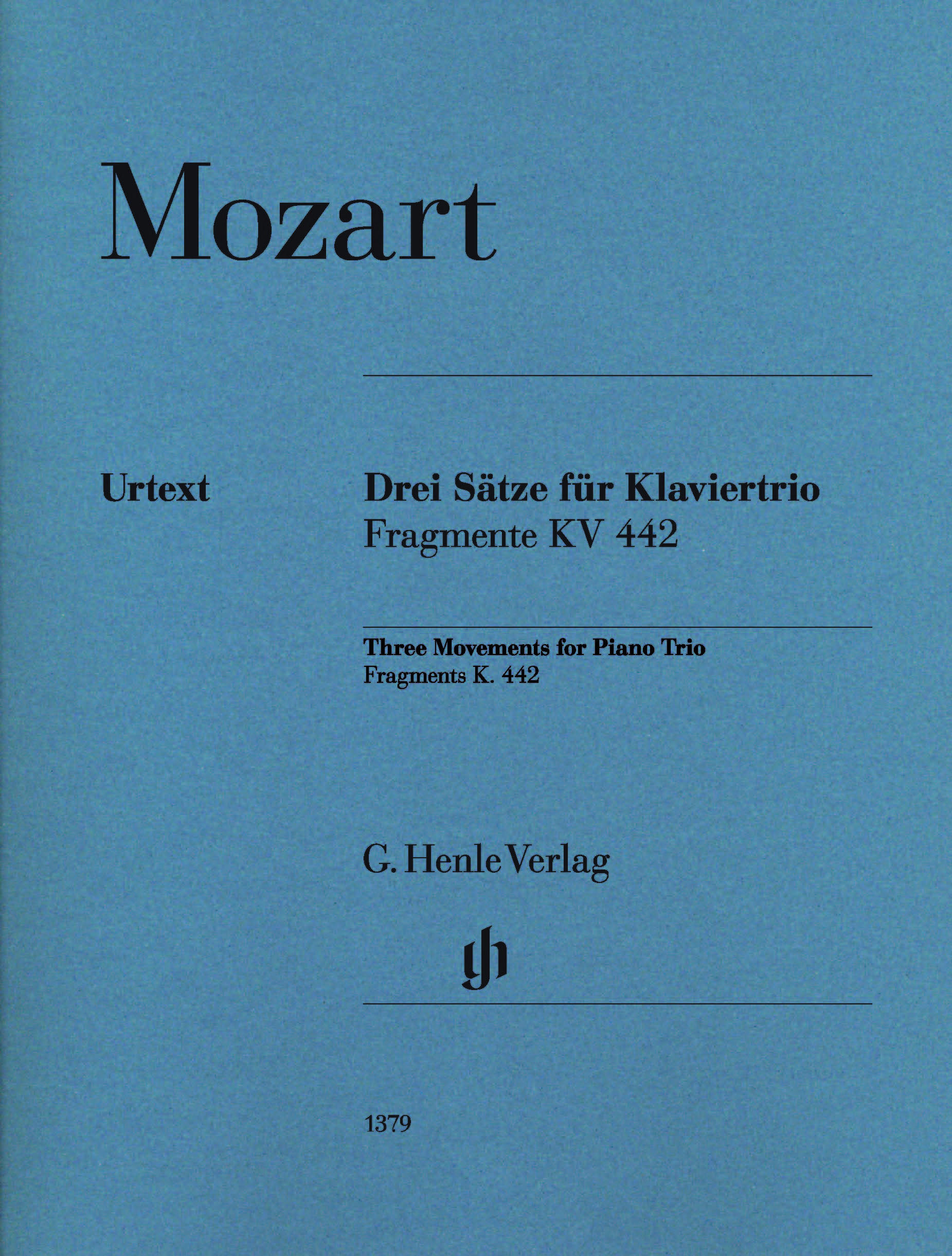 It is extremely rare for us to be able to publish a real first edition. But this happened once again a few weeks ago with my Urtext edition of the three piano-trio fragments, K. 442 by Mozart (HN 1379). In the appendix to this edition we offer completely unknown music scored for piano trio: a movement in D major, a good 350 measures long, well constructed and fairly easy to play. The composer? Well, that’s the question. No, it is not by Mozart, though the unfortunate Köchel number 442 would lead us to believe that here is a Mozart three-movement piano trio, which never before existed.

But then in turn, Mozart did leave behind fragments of several piano-trio movements. Amongst them is an Allegro in D major (“K. 442”, no. 3), which is “one of the most splendid fragments of Mozart chamber music […], even still magnificent in Stadler’s completion” (Wolfgang Rehm in his preface for the New Mozart Edition). It is well known that at the request of Mozart’s widow Constanze, Abbé Maximilian Stadler completed several of his deceased friend’s compositions and then had them printed. In the case of the piano-trio fragments, these were the:

It was the bad idea of Georg Nikolaus Nissen, Constanze Mozart’s second husband, to combine these three individual movements, completed by Stadler, into a full-fledged, three-movement piano trio and to publish it in this form with the Offenbach publisher André. Neither indicating, of course, that most of this music is not by Mozart (but by Stadler!), nor that Mozart ever considered these three movements a single entity. All the source details and also the necessary rectifications for all the previous publications totally misrepresented as the first edition, can be found in my edition’s Preface and Critical Report. To top it off, this edition of André’s then got its own Köchel number, just the 442 – today we would call this “fake news”. 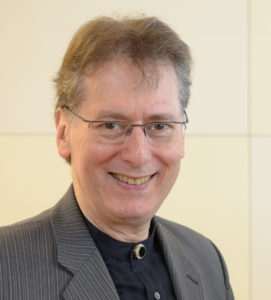 Mozart’s fragmentary trio movements as completed by Stadler undoubtedly enrich the repertoire, which is why I always intended to publish them at Henle. Since together with my friend Robert Levin, I had already published, amongst other things, another volume of Mozart fragments (that is, the violin-sonata fragments, HN 1039), completed by Stadler just like these 3 trio movements, we decided to publish Levin’s completions in addition to Stadler’s (known) completions. It is especially nice that Robert Levin has just recorded “his K. 442” together with the violinist Hilary Hahn and cellist Alain Meunier at the Le Palais des Dégustateurs (together with K. 496). This CD will be available within a few weeks. You can already get a foretaste on YouTube: here the wonderful D-major movement, K. “442/3” – Levin’s addition as of 5’24”, several of the missing string measures already before that are in Levin’s completion. It is clear that in my edition all the added sections are clearly and explicitly marked as such, so Mozart’s “original” share is clearly evident.

I had already largely finished my edition when the Staatsbibliothek zu Berlin Preußischer Kulturbesitz [Berlin State Library for Prussian Culture] published a previously fully unknown copy of “K. 442” in an excellent reproduction with bibliographical description. “Apparently K. 442”– for I was astonished when it became clear that this is first of all Stadler’s own handwriting; that, secondly, he copied Mozart’s original measures as well as his own additions (for this portion it is thus an autograph, for writer and composer are one and the same); and especially that he simply omits Mozart’s d-minor movement, the first movement in André’s first edition. Stadler assembles his very own “piano trio”: “K. 442/3” – “K. 442/2” – and an unknown composition (Allegro in D major), forcing us to assume that this is Stadler’s own creation. Who else in this context of the history of “K. 442” would have contributed such a suitable movement? This exciting new source is accurately described and evaluated in the Critical Report of my Urtext edition under the heading “C1”. 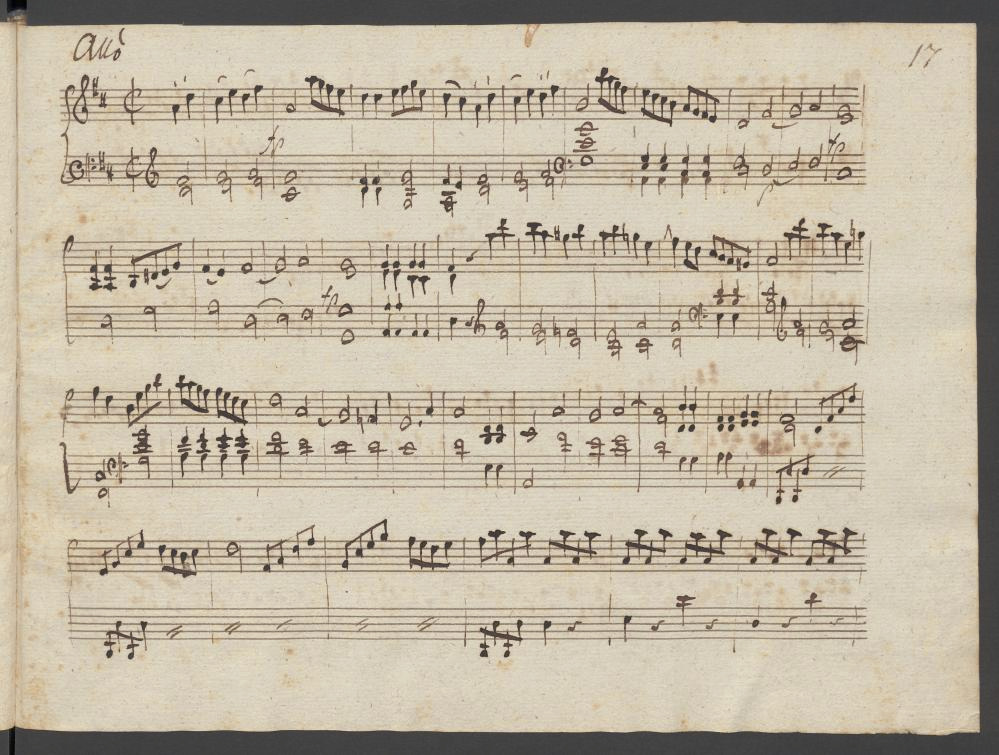 Previously unknown Allegro in D major in the Berlin manuscript

And so we have just published this Allegro of Stadler’s as a first edition in print. This music can have no longer been heard for much more than a century, for the notes have slumbered in the archives of the Berlin library. This is the discovery, thanks now to the library and to public access to the source.

Musicians all over the world absolutely ought to play the movement. It’s good music, perfect in terms of composition and craftsmanship, and the strings are well integrated within the dominant piano part – otherwise we would not have printed it. Of course, it is not on the level with a Mozart, but, please, who would ever claim that? And most of all it is great fun to play. We see here a detailed sonata movement with two extremely catchy, almost childishly naïve themes, cleverly worked up to include the two strings and extensively elaborated for more than 100 measures in the development section.

In his day, Abbé Maximilian Stadler was considered “one of the greatest keyboard and organ players …and an outstanding Austrian composer” (Allgemeine Deutsche Biographie, vol. 54, 1908, pp. 429 ff.). Thanks to our edition, every musician can now get an idea of how stylistically well he completed Mozart’s fragmentary models, on the one hand, and of how well he himself knew how to compose “in Mozart’s style”. I’d very much like to hear our blog readers’ views regarding this find.