We report as a rule in our blog posts on current publishing-house work and interesting finds made whilst preparing our new editions. But even our older editions in the archives are by no means “forgotten”, but are repeatedly compared with the results of current research and then reviewed or updated as needed in the course of re-issues. A very recent example comes from Robert Schumann’s Fantasiestücke op. 73 for piano and clarinet (HN 416).

This concerns an interesting comment that we recently received on an accidental in question in the first of the three pieces: whether the piano right hand in measures 31 and 32 wouldn’t have to read e2 instead of e-flat2 (see the yellow marks), especially here where in another modern edition there is a natural sign?

At first glance the e-flat2 in the right hand is actually strange – after all the clarinet (transposed here to A) and the left hand in the piano play an impeccable broken diminished chord b-flat–d-flat–e–g. And the right hand also plays these notes – up to just the questionable e-flat (and the interspersed passing note c). Wouldn’t this have to be a misprint…?

Since we can no longer ask the composer, the sources must speak for him – after all, the autograph is preserved, unambiguously showing a flat before the notes in question:

It is also notable, incidentally, that here Schumann explicitly puts natural signs in front of (almost all) the other e’s in the piano although they wouldn’t really be necessary within the key, as if to prevent possible lack of clarity….

The autograph, though, doesn’t tell the whole story, since prepared for publishing the Fantasiestücke would have been a copy used as engraver’s model (presently lost), in which Schumann would still have been able to make small changes and further compose, so to speak. He would also have carefully supervised the engraving of the first print by proofreading galley proofs received from the publisher. And despite all that, there is still an indisputable flat before the notes: 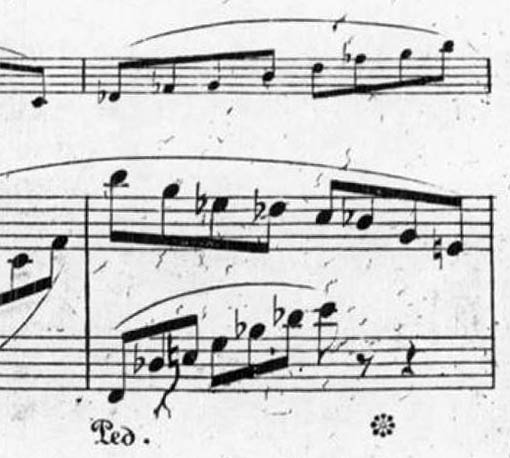 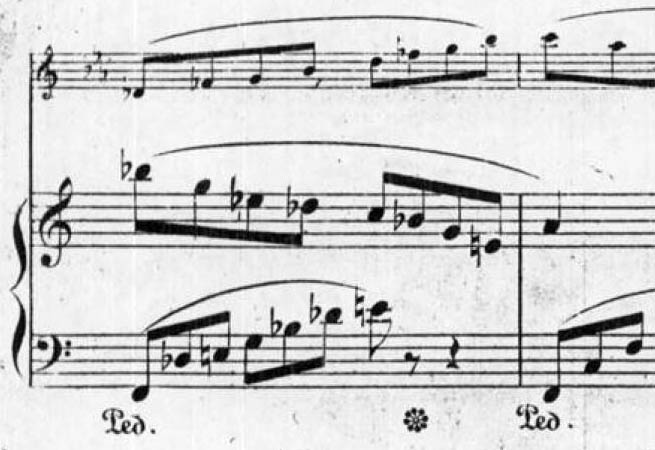 So far, so clear. But still intriguing now is the composer’s personal copy – for Schumann possessed in his library, respectively, copies of all his printed works in which he subsequently corrected misprints. And to be found here are actually traces of a blue-pencilled natural sign: 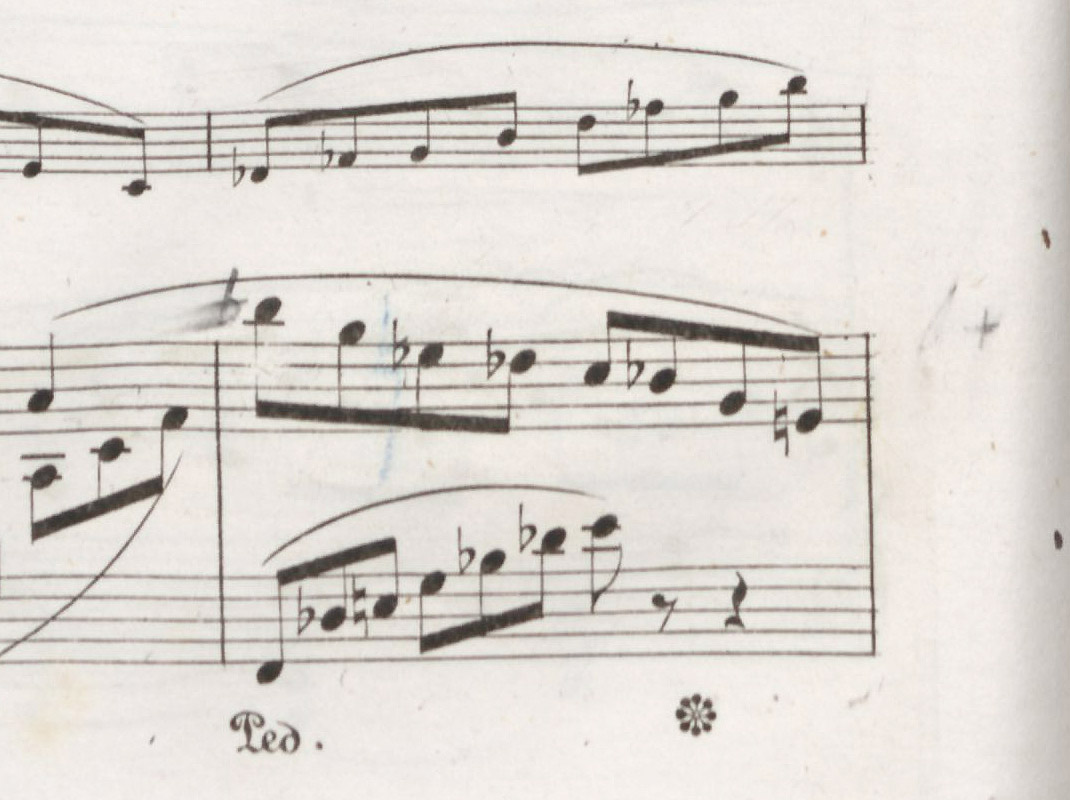 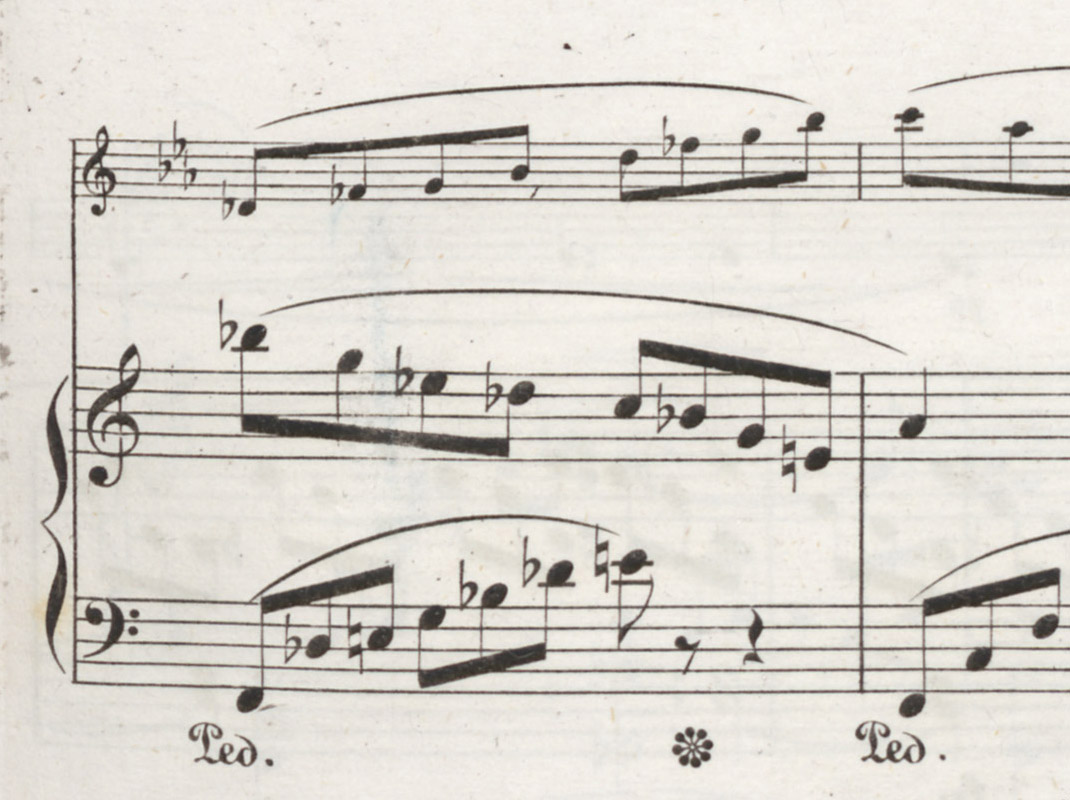 (Illustrations courtesy of the Robert-Schumann-Haus Zwickau)

Doesn’t that conclusively document Schumann’s ultimate decision about this question? I strongly doubt, though, the validity of this single entry. Not only were all the other corrections in this score done in another pencil and a different style, the blue accidental was also eradicated again, as shown by the damaged music staves. If it came from another (later) hand, perhaps it was erroneously entered and again eliminated upon review within the context of the first complete edition of Robert Schumann’s works? Incidentally, Clara Schumann who edited the relevant volume also saw no reason to change the sign: 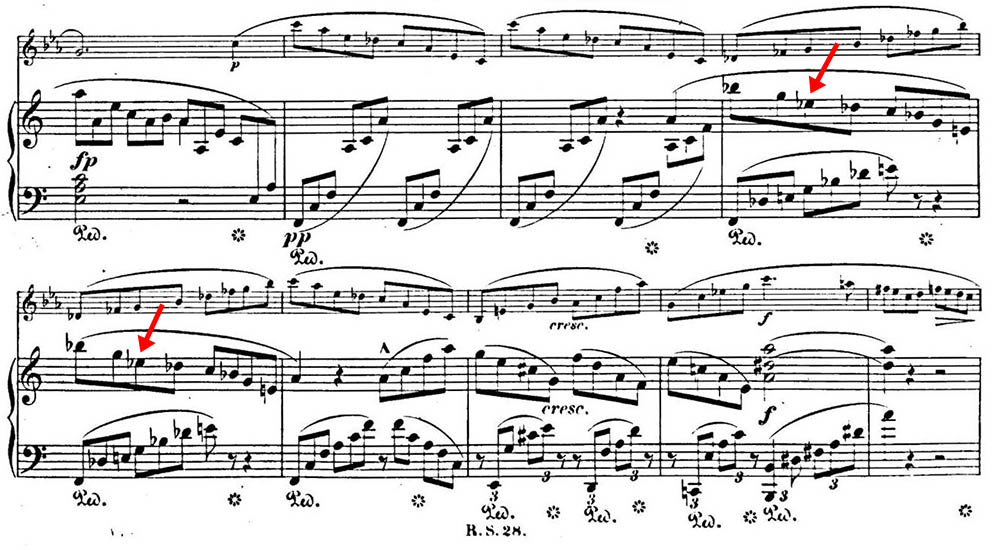 And I intend to identify still another indication of the correctness of the flat sign: in the copy of the first edition, recognized at just this spot can be traces of an engraving-plate correction, that is, the remnants of a deleted natural sign appearing faintly below the newly-engraved flat: 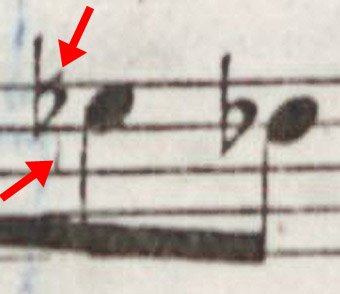 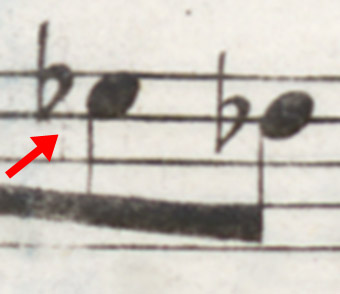 But that can only mean that when proofreading the galleys Schumann deliberately reversed this “disimprovement” by the music engraver. As seductively logical as the e seems to be, we should give more weight to the source evidence, preferring the “poetic-fantastic” e-flat to the “prosaic” e – because, for which composer would this be more appropriate than for Schumann…?

So, we shall not change our edition’s music text, but add an extra footnote specifically to indicate this problem.

By the way, artists themselves also confirm the correctness of the e flat: I could not find a single recording of the Fantasiestücke, in which a pianist had challenged the printed accidental and played e. Listen yourself to the exquisite interpretation by Sabine Meyer and Alexander Lonquich to hear how convincing this measure can sound!

5 Responses to »Schumann revisited – about an odd accidental in the Fantasiestücke, op. 73«