In a few weeks a long-cherished dream of mine will come true: This 2019 autumn we are going to publish Mozart‘s early Viennese String Quartets K. 168 – 173, in Urtext (HN 1121 and HN 7121). To be sure, the text that I’ve edited and our production team has magnificently typeset and printed will not be presented as any totally “new Mozart”, but in the end will feature in detail many, many improvements for the quartet-playing profession. For when the relevant volume of the Neue Mozart-Ausgabe (NMA =[‘New Mozart Edition’]) was published (1966) – and its music text is still being offered by the Bärenreiter publishing house today –, that edition could not [!] be based on four of the six Mozart autographs. Then in 1989, exactly 30 years ago, the NMA at least gained access to the three manuscripts in Cracow: K. 169, 171, 173. At that time whilst I was still a musicology student, I was commissioned by the NMA to produce the “Critical Report” for this NMA volume (NMA VIII/20/Section 1/1: String Quartets · Volume 1, Critical Report, Kassel, etc., 1989). If now these Mozart works, on which, by the way, I did, amongst other things, my doctoral dissertation in 1990, is to appear in my own edition, this is, of course, a wonderful event for me.

Today, I want to go into only one rather more external aspect of these quartets, namely, a small, but insightful inscription at the head of the autograph score for the C-major Quartet K. 170. This autograph was, incidentally, the only one that I was unable to examine in the original for my critical report in 1989. Meanwhile, this has also become available, that is, in the fantastic Paul Sacher Stiftung in Basel. Here, as a little service (only for my blog readers) is the overview of the Mozart autographs for these six string quartets, together with the link to their digital copies (as applicable):

All that interests me in this blog post is the title at the head of the autograph of the C-major quartet K. 170: “quartetto III”. 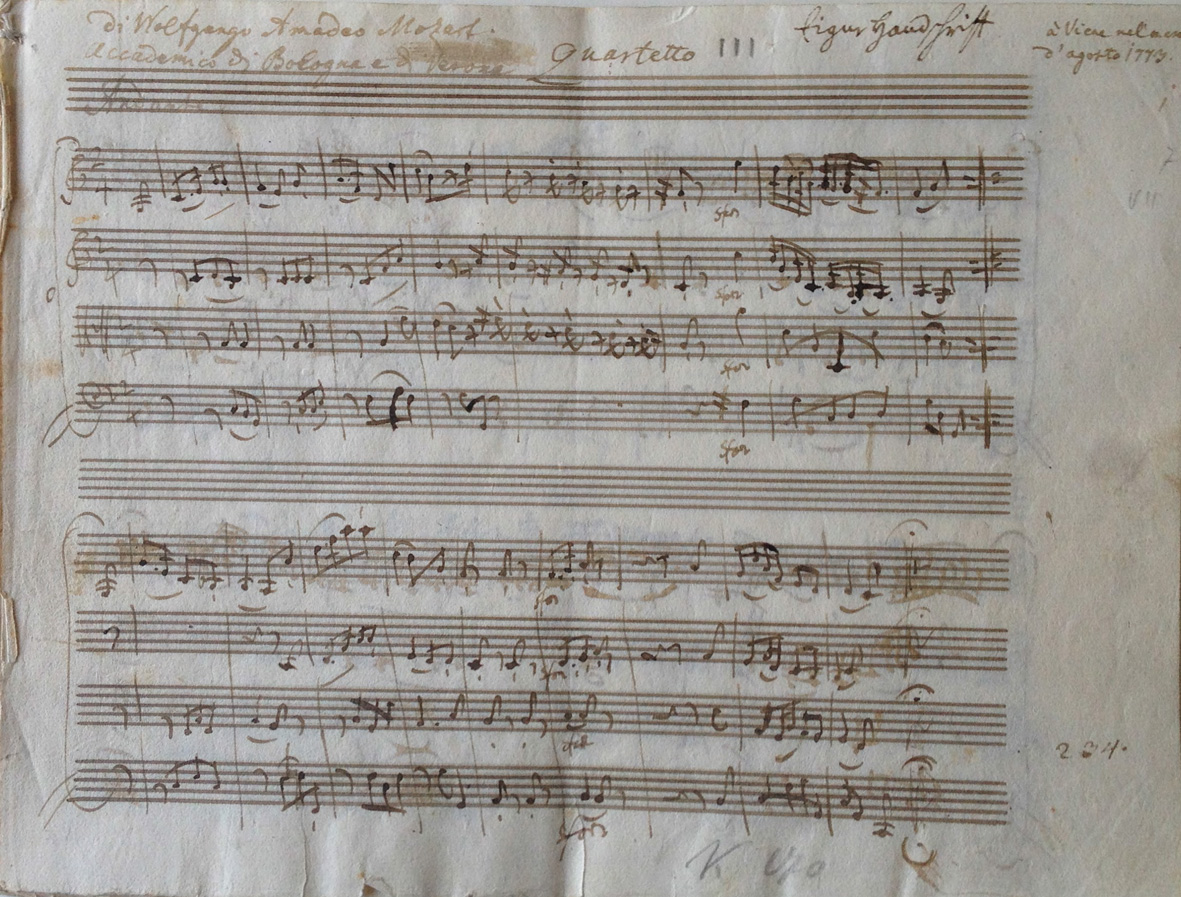 The heading does not come from Mozart himself, but from his father Leopold (whose 300th birthday we’ll be celebrating this year). The father was obviously very proud of what his seventeen-year-old son had put on paper during his Vienna stay in August 1773:

“di Wolfgango Amadeo Mozart. | accademico di Bologna e di Verona”, he writes in ink at the top left of the first page. Let’s recall: In 1770 at only 14 years of age, Mozart was accepted as a member into the noble “Accademia Filarmonica” of Bologna, after studying with the famous contrapuntist Padre Martini. Though why his father also mentions the Verona academy (was Wolfgang also a member of it?), I have no idea.

Be that as it may, the heading “quartetto” also comes from Leopold Mozart’s hand, whereas the subsequent Roman numeral “III” looks more like it comes from another hand. So far, so good. Although I had noticed the ink blurring above “Verona” in the photos then available, it had been impossible to decipher what Leopold Mozart had originally written (“illegible, blurred correction above Verona”, I write in the pertinent critical report, p. a/65). Recently, I was permitted the on-site privilege of examining Mozart’s original in the rooms at the Paul Sacher Stiftung (available for viewing there are high-resolution scans that are just as good); lo and behold, Leopold had originally written and then wiped out: “Div[ertimento]”.

“Divertimento” is, of course, the old, virtually passé string-quartet titling. In the 1760s Joseph Haydn had still termed his earliest string quartets as “Divertimento”, but Mozart was already using the “modern” term to head his earliest quartets of 1770 and 1772/73 (K. 80, K. 155 – 160), with an eye to the scoring (4 parts) rather than to the function (entertaining). Leopold Mozart, immediately recognising his own error in writing out the wrong term, no longer in use, thus wiped it out in the still wet ink and corrected it to the scoring title.

This trifle seems so important to me, because I am hypothesising as follows: From the outset on their respective title pages, each of the five other autographs for the string quartets K. 168 – 173 carries the so-to-speak correct “quartetto” – yet only K. 170 still doesn’t at the first attempt. (This can all be gleaned by reading the relevant critical report.) From this, and from the fact that only in K. 170 does the autograph bear the rather proud inscription, and even exceptionally, at the top left (“accademico di Bologna e di Verona”), means, I’m surmising, that the C-major quartet K. 170, was likely the first of Mozart’s six string quartets written down in Vienna in 1773. The other five followed thereupon, I maintain. For stated in K. 168, 171 and 173 at the top right, differing from K. 170, is: “del Sgr. Caval: [KV 173 only “Cav:”] Amadeo Wolfgango Mozart”; added after the title in K. 168, when the binding sequence of the six quartets had subsequently (!) been clarified, was: “6 quartetti del Sgr: Caval: …” (K. 169 and 172 bear no such relevant signing).

In what a messed up form the C-major quartet then appeared when it was first published posthumously (that is, shortly after Mozart’s death, in a corrupted thrown-together form with a movement from the earlier C-major string quartet K. 157) is another story altogether and could one day play a role in one of my next blog posts.