There is always a risk in producing an engraved plate (or a digital file today) for a printed music edition that the engraver/typesetter will not accurately copy the model in some places. That’s why composers were already insisting very early on that the publishing house in question let them have a galley proof to proofread and correct before the final printing. This was, in fact, no guarantee of a flawless first edition, for composers often overlooked compositional errors or, vice versa, the engraver overlooked or misunderstood the composers’ corrections. But it gave composers some degree of certainty that the printed music text would not appear littered with errors. Moreover, the proofreading offered a welcome opportunity to make changes here and there in the original version.

The more complicated the scores turned out to be, the more urgent it became to produce and check a second proof or even further galley proofs. Whilst by the end of the 19th century there were usually a maximum of two proofs to read, the need for these, particularly for harmonically and metrically demanding works, increased significantly. Ravel’s string quartet, for example, is extant in 3rd and 4th galley proofs; clearly recognisable from the stamp altered by hand on the 4th galley is that such had actually not been intended:

We editors would like, of course, to have complete sets of galley proofs for every work, so that all the differences between engraver’s model and first edition would be transparent, but in fact such galley proofs have seldom been preserved. After the corrections were implemented the proofs were worthless to the publishing house, and composers only rarely demanded them back again. The situation is different when close friends and acquaintances, that is, persons other than the composers themselves, were involved.

Examples of the latter include Gabriel Fauré’s late chamber music works, being presented since 2014 by Henle publishers in new Urtext editions. Extant here were the 2nd galley proof of the piano trio op. 120 (HN 1292) and the 1st galley proofs of both the cello sonatas opp. 109 and 117. In all cases the galley proofs coming from the pianist Alfred Cortot’s estate are presently distributed amongst several libraries; Cortot had already formerly started collecting his composer friends’ autographs as well as manuscripts and galley proofs with autograph entries. The galley proof of the 1st cello sonata recently published by Henle (HN 1357), which I would like to explore more closely here, is preserved today in the Yale University’s Beinecke Library. It contains corrections by Fauré himself and by Lucien Garban, then editor of the Durand publishing house.

It is understood that the first edition, published in early 1918, constitutes our edition’s main source, but the extant galley proof is particularly valuable here – as a link between the engraver’s model and the print. This is especially so since no complete autograph score is extant, but merely an incomplete part-autograph of the first movement and an autograph of the third movement, none of which served as engraver’s model, and the relevant copies (also of the 2nd movement) must be considered lost.

That there must already have been changes from the original drafts in the lost engraver’s models, which are known to have arrived at the publishing house movement by movement, can already be seen from a cursory examination of the two extant galley proofs for the score and the cello part. In the 3rd movement autograph, the piano and cello open, for example, in p, though here the galley proof already contains a printed mezzo p; such detailing undoubtedly goes back to Fauré. In other cases, however, a small question mark remains. Thus, the engraver forgot the f that Fauré had notated for both cello as well as piano from measure 55 in the Finale; but in the galley proof Fauré wrote it at the end of measure 55 with a reference mark at the opening of measure 56.

Printed, accordingly, in the first edition at the opening of measure 56 was f, and we must follow this explicit intention regardless of the unanswered question as to whether Fauré was aware of the correction in the dynamics he had already notated a measure earlier.

Already arising with this correction is an inconsistency that is shown in many other places; Fauré forgot to enter the f for the string part in both the score galley proof as well as also that for the cello (added, of course, in the new Henle edition according to the autograph); this lack of coordination between the entries in the string-part and score galley proofs led to differences in the first edition that can be relatively easily rectified in the new Urtext edition  from a glimpse at the galley-proof correction. If the galley proof were not extant, though, we would certainly be inclined here to take the f in measure 56 as an engraving error.

Even more serious is Fauré’s intervention at another spot in the Finale. In the autograph Fauré notated d2 as the 6th note in the upper piano stave. But printed as the note in the galley proof was c sharp2. Instead of correcting the engraving error to d2, though, Fauré changed it to a1. 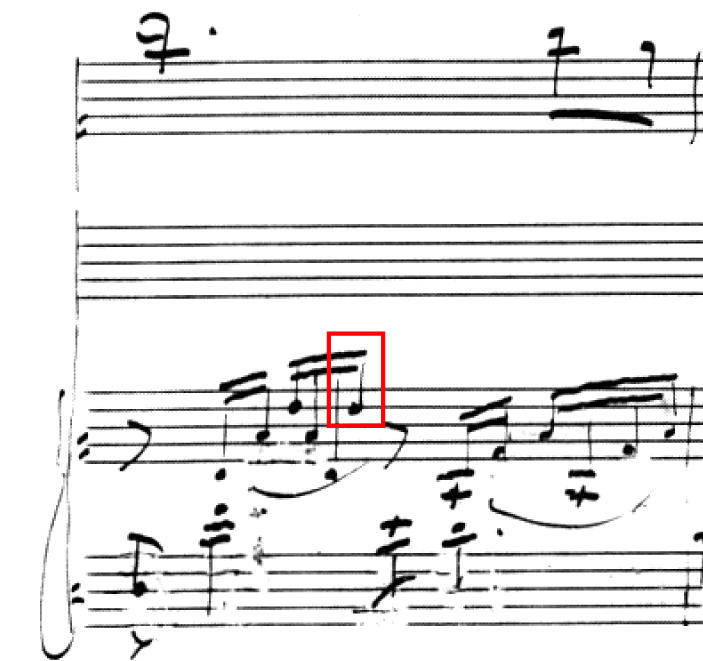 At first glance, the correction to a1 is astonishing, since the sixteenth-note figure in the surrounding measures suggests d2 as rather more likely, but perhaps the intention was just to interrupt with a slight variant the mechanism of this constantly repeated figure. Fauré’s correction, though, was not implemented, but apparently overlooked by Garban, so that the first edition (and its reprints) show c sharp2 here – a note that cannot be right in any case. Without a glimpse into the galley-proof correction, any editor would restore the d2 from the autograph – against the composer’s intention; we have put a1 in our new edition in accordance with the galley-proof correction. In this respect it is no exaggeration to qualify this sonata’s galley proofs as especially valuable.