Illustrations with kind permission by the Beethoven-Haus Bonn.

Piano concertos and sonatas, violin concerto and sonatas, cello sonatas – but where are the solo works for viola from Beethoven’s pen? Was the instrument too alien to him, wasn’t he aware of the viola’s special value and timbre? This certainly can’t be the case when we think of his unique string quartets and string trios. And the fact that Beethoven himself played the viola! It’s worth taking a closer look at the matter!

The young composer as violist

Yes, in Bonn, to be sure, Beethoven was taught not only organ and other keyboard instruments by Christian Gottlob Neefe, but also violin and viola by the court musician Franz Georg Rovantini and by Franz Ries, Electoral-Court music director. At age 14, he was hired as second organist of the Hofkapelle, five years later he was a violist in the same ensemble.

We know about his extraordinary talent as a pianist, with which he caused a stir throughout Vienna. Yet, hardly anything is known about his viola playing. Ferdinand Ries, who took piano lessons from Beethoven at the turn of the 19th century, offers us a very small and not very representative view, though coming from a candid source:

‘Beethoven took lessons on the violin from Krumpholz, and at the start when I was there*), we still sometimes played his sonatas with violin together. But that was really a dreadful music; for in his enthusiastic keenness, he did not hear when he wrongly fingered a passage.’

So, Beethoven also still took violin lessons in Vienna, from the Wenzel Krumpholz mentioned by Ries and from his friend Ignaz Schuppanzigh, first violin of his famous eponymous string quartet.

The viola that Beethoven played in Bonn around 1789 is extant. It belonged to the Bonn Hofkapelle – it was built by the Viennese Sebastian Dalinger ca. 1780, initially owned by the Ries family and reconditioned several times in the 19th century (neck, fingerboard, tailpiece and pegs were restored), though it languished in silence for about 100 years. This only changed in 2001 when Tabea Zimmermann brought the instrument back to life:

‘Itʼs rather small, with gut strings, no chin or shoulder rests, and a sound very different from what we need today – not very large but beautiful, sweet like a soprano. It was fantastic, picking it up, touching it slowly, starting to play it slowly, getting the first music out of it in 100 years. And it certainly helped make my connection with Beethoven a very personal one.’ (Original quote from: bachtrack) 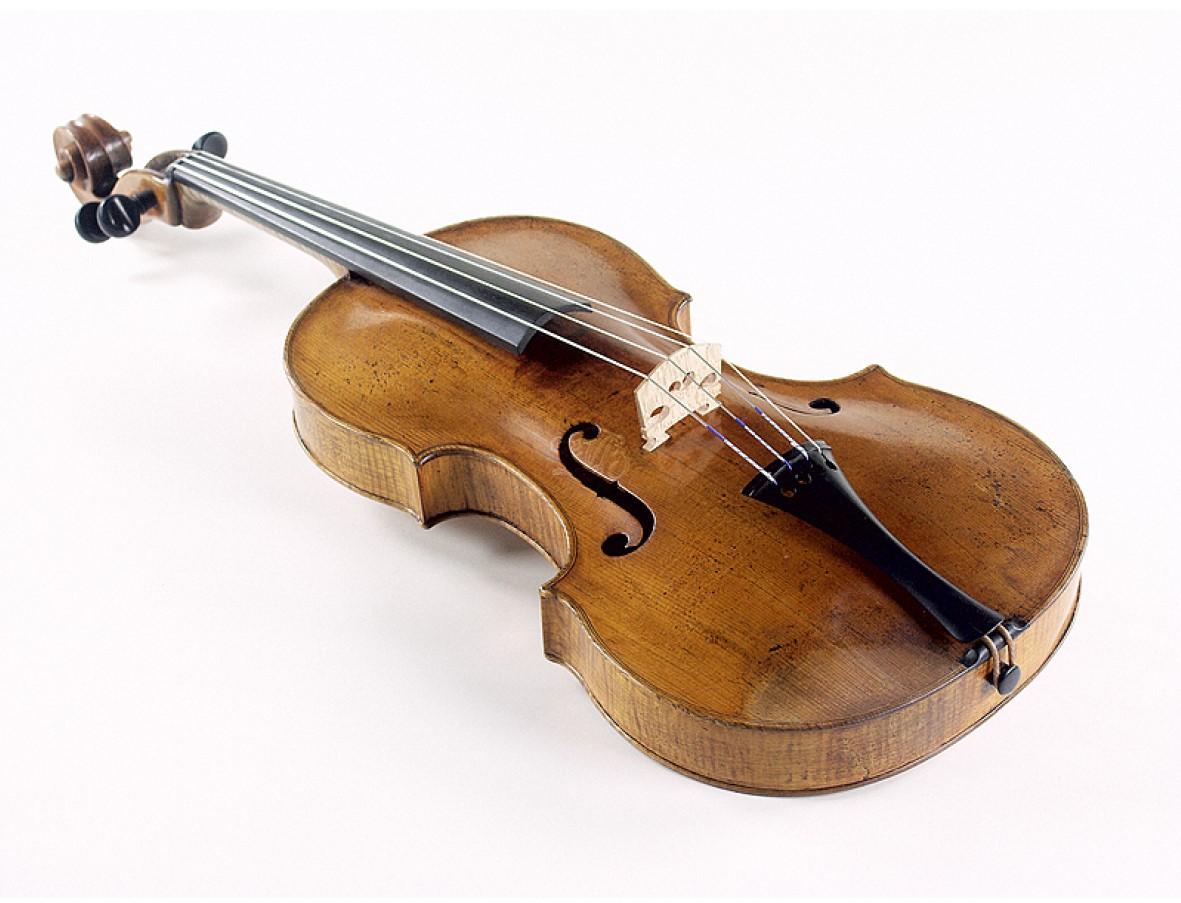 Further information and views of the instrument can be found here.

When is an arrangement of a composition authentic, when can it be considered “genuine Beethoven”? The composer occasionally commented on this in clear terms, such as concerning his piano works and possible arrangements in 1802:

‘The unnatural rage one has of even wanting to transcribe piano things for string instruments, instruments that are so opposed to each other in every way, would like to be able to be halted […] and without my wanting to be associated with both great men [Mozart and Haydn], I would also say the same thing about my piano sonatas, since not only do whole passages have to be completely omitted and changed, but one must – still add, and here is the awkward stumbling block, which in order to surmount one must oneself be either the master, or at least have the same skill and invention’ (from letter no. 97, Beethoven Briefwechsel Gesamtausgabe [Complete Edition of the Beethoven Correspondence], vol. 1).

We certainly know of only a few works that Beethoven himself transcribed for another scoring:

Problematic now are those works published under his name, but whose status cannot be precisely determined:

Since I am reporting here on Beethoven and the viola, we are particularly interested, of course, in the “Notturno”, for this is actually a solo work for viola, even published with an opus number in 1804 by Hoffmeister & Kühnel in Leipzig: 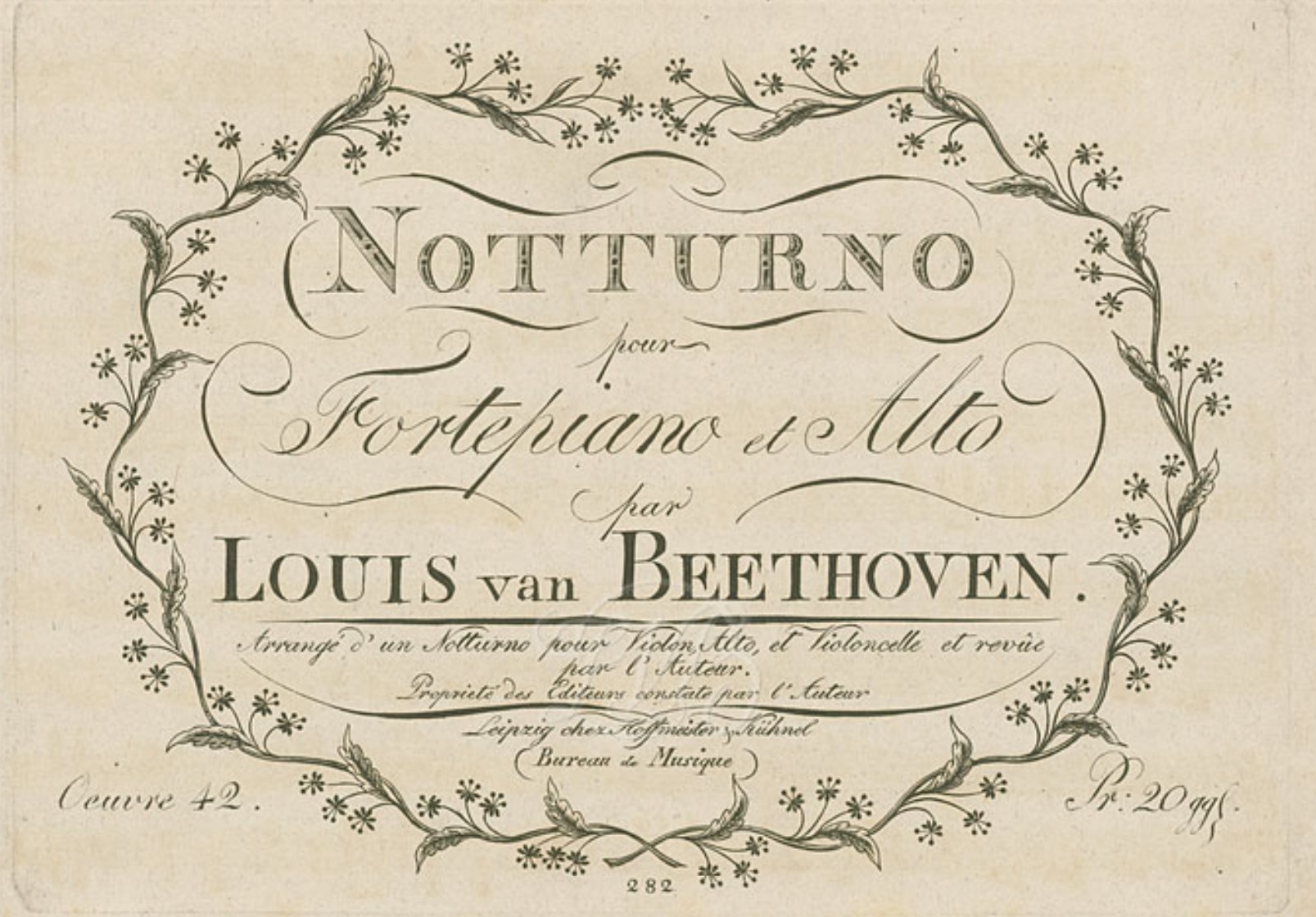 Title page of the first edition of the Notturno for piano and viola op. 42

Opus 42 evidently originated, as did also the serenade op. 41, as the business initiative of Karl van Beethoven, who as of 1802 became his brother’s “manager” for several years. He saw the sale of arrangements as a lucrative source of income to be gladly exploited, so in June 1802 he wrote Breitkopf & Härtel:

‘For, I am making you another proposition, my brother has often been approached about having several of his piano sonatas and other works arranged, but he has never wanted to [do it], though finally I have gotten him a skilled composer [possibly Franz Xaver Kleinheinz] who under his supervision has arranged several works, e.g., sonatas for piano, as quartets, and instrumental pieces for piano. All suitable ones will gradually come along and be checked by my brother and where necessary changed. At the moment we have already finished a number which you can have piece by piece at 18# [ducats].’ (letter no. 90, Beethoven Briefwechsel Gesamtausgabe, vol. 1)

The offer probably went to various publishers, including Hoffmeister & Kühnel, to whom Beethoven cautioned:

‘The transcriptions are not mine, but they have been reviewed by me and have been completely improved in places, so don’t come to me writing that I’ve transcribed them, because otherwise you’re lying, and I wouldn’t even have found the time and patience to do it.’ (letter no. 157 of ca. 20 September 1803, Beethoven Briefwechsel Gesamtausgabe, vol. 1)

The publisher adhered to this requirement, as the title page (in a less prominent place) reveals:

We shall probably never know, though, to what extent the “revûe par l’Auteur” [reviewed by the composer] of this transcription is actually the stamp of Beethoven’s full authorisation. The publishing house, though, considered these editions inferior, which is why the attempt was also made to reduce Beethoven’s honorarium. Stated about this in a publishing house in-house letter is:

‘then you must claim compensation: for 50# [ducats] for such manuscripts is really too much for us: there is nothing to be gained and then so miserably written that we often do not know how to deal with it. With this arranging Beethoven will not increase reputation.’ (letter no. 174 of 21 December 1803, Beethoven Briefwechsel Gesamtausgabe, vol. 1) 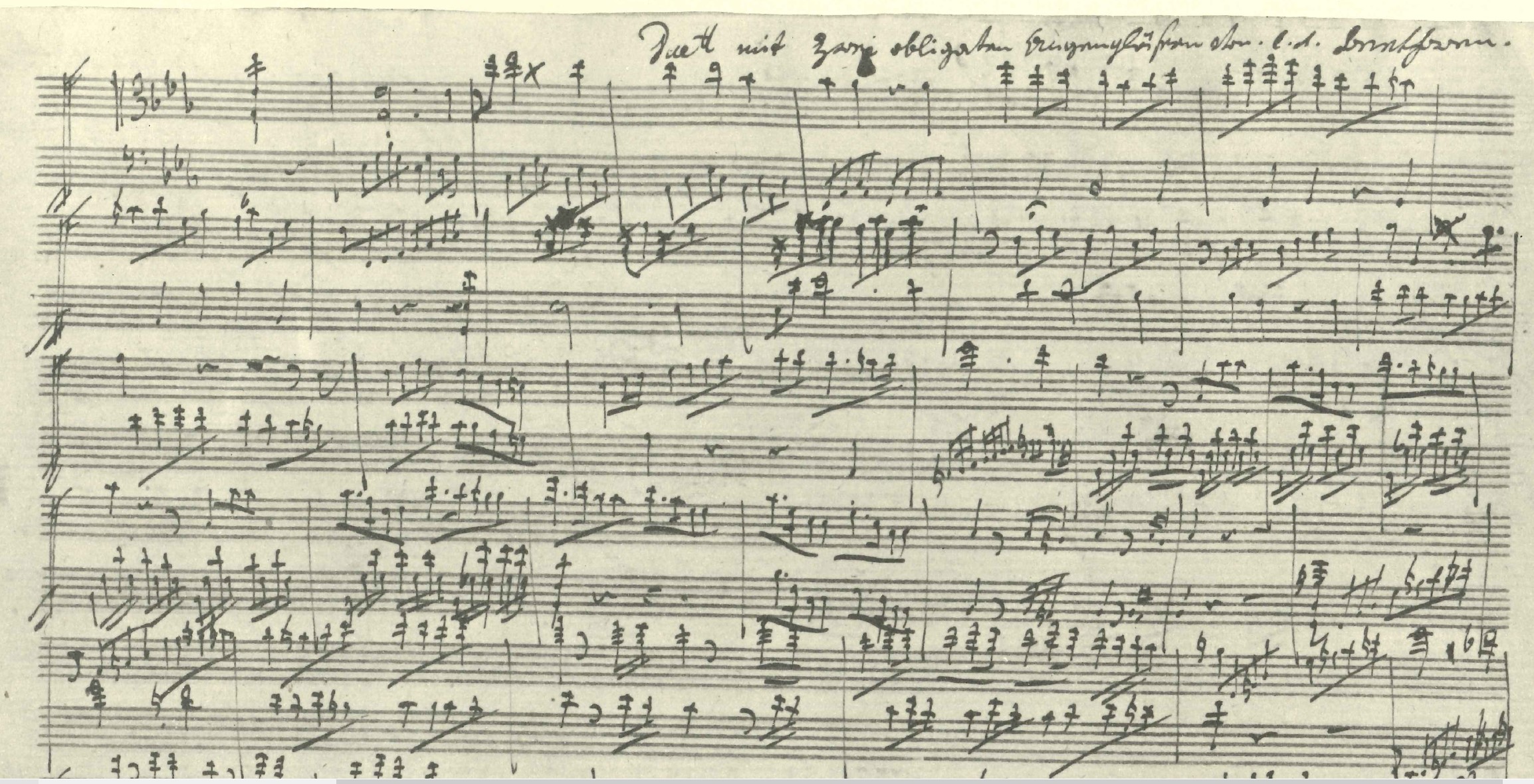 Excerpt of the 1st page of the 1st movement in the so-called ‘Kafka Sketchbook’, folio 135r

Unlike with the transcribed Notturno op. 42, there is no doubt about the authenticity of the ‘duet with two obbligato eyeglasses by L. v. Beethoven’ for viola and cello – as stated on the page illustrated above. And yet, as with opus 42, the source situation is unsatisfactory, if, however, for another reason: No complete autograph is extant of the duo evidently planned for multiple movements. Merely the 1st movement and the ‘Minuetto’ together with ‘trio’ can be found in the so-called ‘Kafka Sketchbook’, a collection of loose folios from Beethoven’s earlier period.

Even though both movements are inscribed from first to last measures, Beethoven did not get the music text ‘ready for printing’, for to be found there are not any kind of articulation or dynamics. The sketches for a slow movement and possibly another movement in ¾ metre suggest that the duo might have become a three- or four-movement sonata or even a multi-movement serenade. But these movements are lacking any trace of elaboration, which may perhaps never have been attempted.

Sketch for a slow movement in the ‘Kafka Sketchbook’, fol. 137v

Beethoven himself obviously never considered publishing this duo. The minuet was written on music paper that he used in May/June 1796 on his concert tour in Berlin. Since within close proximity there are sketches of the cello sonatas op. 5 written for Jean Louis Duport, the duo – or at least the minuet – may originally have been composed for Beethoven and Duport’s joint music-making in Berlin.

The unusual title – targeting two wearers of spectacles – has, however, so far been more associated with another cellist in Vienna, Nikolaus Smeskall. Around 1798 Beethoven wrote him: ‘Dearest Baron Dreckfahrer [mud-driver] je vous suis bien obligè pour votre faiblesse de vos yeux. [I am very grateful to you for your weak eyes.]’ (letter no. 35, Beethoven Briefwechsel Gesamtausgabe, vol. 1) Although Beethoven’s thanks could be directed at borrowed spectacles, it has repeatedly been related to the duo WoO 32.

An arrangement and a fragment – a yield really meagre, if also not unattractive, for violists!

Beethoven and the viola!

But let’s ask the violists themselves. The question is: ‘You have no Beethoven sonatas or concertos. What then about the awesome Beethoven composing for viola, where can it be found? In the string trios, the quartets? Which Beethoven works does the violist most look forward to playing?’ And here are the answers:

‘With a personal view of the string quartet repertoire: Op. 131, 6th movement, Adagio quasi un poco Andante. The culmination of this ultimate quartet opus with the viola’s slow measures, with a look, as it were, at everything that was and will ever be, makes my heart beat faster every time – for that alone it is worth being a violist. Through his chamber music Beethoven has very richly gifted the viola.  I am grateful for that every day.’ – Monika Henschel

‘I think for me of course all the quartets, op. 131, slow movement of op. 127, op. 132 and op. 74 ‘harp’, op. 59 no. 2. I recently played the horn sonata op. 17 in F major which has been introduced by Timothy Ridout, former student of mine from Kronberg. It is a transcription by Rudolf Leopold. It is fun to play, and the piece has lots of humor.’– Nobuko Imai

‘All of his works are so strong that I find it difficult to pick out special passages. Each of its tones is an event … In general, I love the string trios, because in these works, without a second violin, one is more called upon as a soloist than in the quartets. But, of course, the quartets represent a unique cosmos that cannot be surpassed. I would also like to mention the duet with the obbligato eyeglasses and the serenade with flute and violin, both attractive works for the viola, in various functions.’ – Hariolf Schlichtig

‘About Beethoven, my own favourite pieces to play are the String Trios (especially the Op. 3 and the Op. 9) which are all incredible but with a special mention for the c minor op. 9 no. 3. I also love the Serenade for Flute, Violin and Viola where the Viola has many roles to take, either bass or middle or top voice, all the time. But of course, the quartets remain the ‘Taj Mahal’ and my favorites are the Op. 59.’ – Antoine Tamestit

‘During intensive study of Beethoven’s chamber music on the occasion of the Bonn Beethoven Week 2020 at the beginning of the year, I noticed again how often and how incredibly skilfully and surprisingly Beethoven develops a new motif out of an almost insignificant detail. I learned to love rhythmically interesting motifs on a note that can be discovered in almost all works and, above all, I have completely rediscovered the depth of some slow movements. Very special highlight: the slow movement from the string quintet op. 29!’ – Tabea Zimmermann

3 Responses to »Beethoven and the viola«