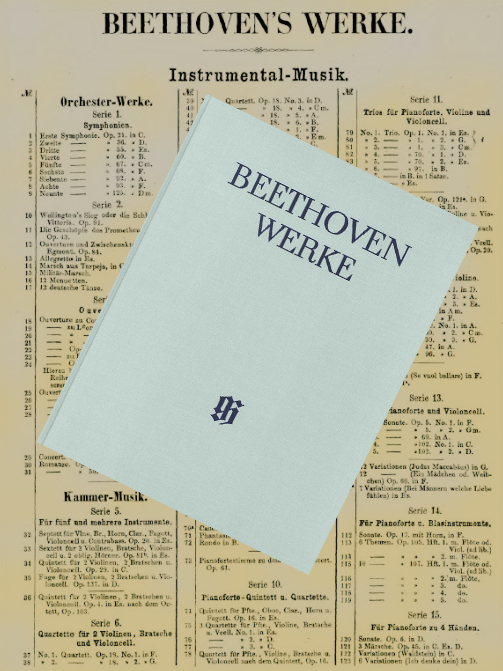 A few weeks ago my colleague Annette Oppermann reported on the start of Beethoven’s complete editions, or rather, on the numerous attempts to publish such – the most enterprising and successful being those of Tobias Haslinger (from 1828) and Franz Philipp Dunst (from 1829) that were begun immediately after Beethoven’s death. Following up on this, I would now like to report on ventures from the second half of the 19th century, concentrating in particular on the two most important of these editions known to the world as the “Alte Gesamtausgabe [Old Complete Edition]” (AGA, 1862–65) and “Neue Gesamtausgabe [New Complete Edition]” (NGA, since 1961).

Interest in Beethoven’s music increased enormously after 1850 – it could almost be said that with every year beyond his lifetime, his reputation grew until he was generally considered the century’s greatest composer – so that heroising him went hand in hand with his growing popularity. For music publishers this meant that Beethoven editions became a sure-fire success and sprouted like mushrooms after a warm rain. Otto Jahn, the well-known Mozart biographer, even estimated in 1864 that “the whole of Beethoven’s compositions sold by the music trade in one year could outweigh all other music sold that same year”.

So, there was no shortage of new individual editions, let alone new series of works’ editions, especially for piano and chamber music. In order to arouse buying interest, a publisher had to distinguish himself from the competition through one or more of the several available options: the alleged completeness of the compositions (absolutely or as related to a group of works), the favourable price, the participation of a prominent musician or the originality of the scoring in terms of arrangements. An example of such largely forgotten efforts is the edition by the Wolfenbüttel publishing house Ludwig Holle published from 1857 as L. van Beethoven’s sämmtlichen Compositionen [All L. van Beethoven’s Compositions], “as revised by Dr Franz Liszt” and – hardly surprising – remaining incomplete like the Haslinger edition in its time.

Growing at the same time was also interest in the music-text quality, since the realising of a complete edition of the works in line with philological criteria, as was done in the Old Complete Edition of 1862, was hardly a matter of course. The first complete editions in today’s sense were those of the works by J. S. Bach (from 1851) and Handel (from 1858) published by Breitkopf & Härtel, which were still committed to the earlier, 18th-century Denkmäler [historical monuments] idea. These editions were to be as complete as possible, not least because it was feared that many of the compositions extant only in manuscripts would otherwise be forever lost. In the case of Beethoven who died a good 30 years prior to 1860 and whose works, insofar as they were published during his lifetime or after his death from his estate, were firmly anchored in music life, securing endangered works played only a subordinate role. Here, the focus was rather on completeness and accuracy, aimed not at a relatively small group of music lovers and musicologists, as was the case with Bach and Handel, but at the “entire musical audience”, as Jahn expressed it in his already cited essay Beethoven und die Ausgaben seiner Werke [Beethoven and the Editions of his Works].

Only against this background could Breitkopf & Härtel on its own initiative start such a mammoth undertaking, though this publishing house also had the best prerequisites for reliably planning such: It held the rights to a not inconsiderable portion of Beethoven’s works, had sufficient financial resources to acquire licenses for the compositions first published by other publishers and had published in 1851 as a basis for a complete edition the first works’ catalogue (Thematisches Verzeichniss sämmtlicher im Druck erschienenen Werke von Ludwig van Beethoven [Thematic Catalogue of all the Published Works by Ludwig van Beethoven). The special value placed on authorisation to reprint all the works is also expressed in the title of the edition: Ludwig van Beethoven’s Werke. Vollständige, kritisch durchgesehene überall berechtigte Ausgabe. Mit Genehmigung aller Originalverleger [Ludwig van Beethoven’s Works. Complete Edition, critically reviewed, valid throughout. With the authorisation of all original publishers]. 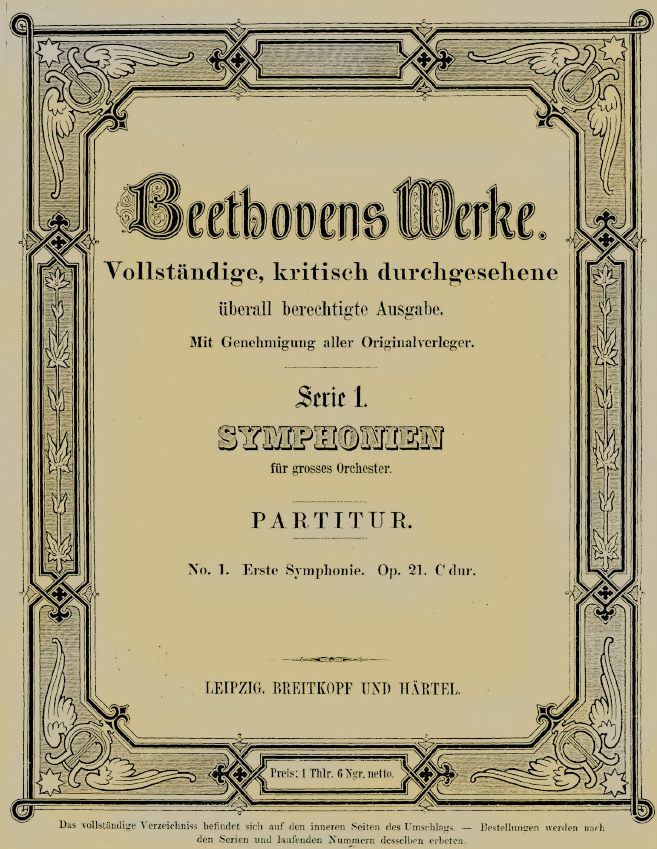 The AGA appeared within just four years, 1862 to 1865, in 24 series with altogether 262 individual numbers. An astonishing publishing achievement, even when considering that preparations for the volumes had already started during the sometimes-lengthy license negotiations. In order to make the edition also a practical edition, all numbers in the 30 volumes were also available separately, and relevant performing parts were published for works involving multiple parts. 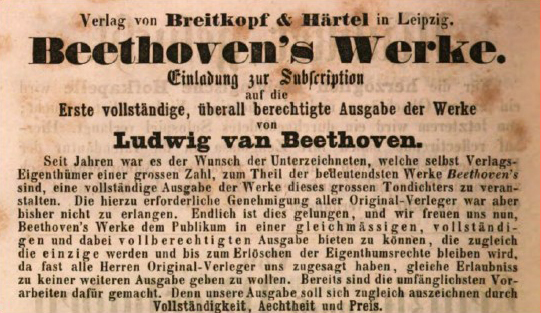 “Completeness” pertained to works either not yet published or currently out of print. Probably the most important composition of these was the Musik zum Fest-Vorspiel „Ungarns erster Wohltäter“ („König Stephan“) [Music for the Festivity Prologue “Hungary’s First Benefactor” (“King Stephan”)] op. 117 – previously known of which had been only its overture. The supplementary volume that first appeared in 1888 was to prove much more productive in terms of first editions. It contained 46 mainly unprinted works, including the two large “Kaiser” cantatas WoO 87 and 88. “Authenticity” referred to the “critical revision”, consisting essentially of the “precise comparison of extant autographs and the first original prints”, but taking into account also accessible copies and manuscript parts. In practice, the “revisers” – amongst them well-known contemporary musicians such as Ferdinand David, Julius Rietz or Carl Reinecke, supported by researchers such as Otto Jahn and Gustav Nottebohm – used their rich performance experience to correct some of the long-known errors. Concerning “price”, it was higher than that of the competition’s simple reprints, but remained advantageous, given the high print quality of the revised music text.

Despite detail revisions in the practical editions based on it, the AGA remained the Beethoven reference edition par excellence for almost a hundred years. It was only after World War II, with its subsequent lingering shock of numerous destroyed manuscripts and original prints, that the time became ripe for a new complete edition. The fact that this new Beethoven edition, published from 1961, was entrusted to the then very young Henle publishing house is only astonishing at first glance. Its founding publisher Günter Henle had himself suggested the establishment of the Joseph-Haydn-Institut for the publication of the complete Haydn edition, and he had excellent contacts with the Bonn Beethoven-Archiv that was responsible for the publication of the NGA.

In a way not initially intended, the supplementary final AGA volumes coincided with the start of the NGA. In 1957 the extremely industrious Beethoven scholar Willy Hess presented a Verzeichnis der nicht in der Gesamtausgabe veröffentlichten Werke Ludwig van Beethovens [list of 335 (!) works by Ludwig van Beethoven not published in the AGA]; this served as the basis of his altogether 14 supplementary AGA volumes, which he published with Breitkopf und Härtel between 1959 and 1971. He anticipated the NGA that started only two years later (1961), especially with respect to the still unpublished works or parts of works (such as the piano reduction of the Ritterballett WoO 1 or the original form of the Rondo WoO 6). 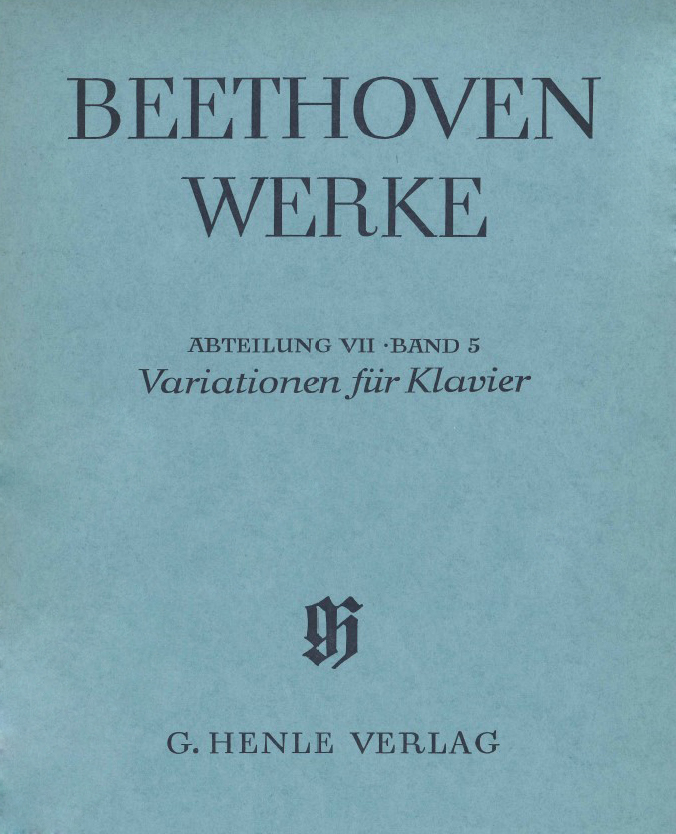 The cover of the New Complete Edition titled Beethoven Werke [Beethoven Works] appears as simple and modest as the task formulation opening the first volume’s preface:

“The complete edition of Beethoven’s works should include all of the Master’s finished compositions. The text presented in it, which results from a critical comparison of all the important sources, is intended to reproduce the individual works in a form corresponding as closely as possible to Beethoven’s intentions.”

This goal is certainly not far from what the revisers of the old complete edition had had in mind in their time – and yet what a difference in responsibilities and aspirations when comparing the updated state of philology in general and Beethoven research in particular. Not only had other manuscripts been rediscovered since 1860, but also the sketches and drafts that had hitherto mostly been neglected were now exploited as sources and also published in part. In addition, the volume published by Henle publishers in 1955, Das Werk Beethovens. Thematisch-bibliographisches Verzeichnis seiner sämtlichen vollendeten Kompositionen by Georg Kinsky and Hans Halm, supplemented by the aforementioned Hess list, provides an up-to-date overview of the entire oeuvre. Another important aspect additionally comes into play: The AGA did not include any editorial reports such as are absolutely essential in more recent critico-scholarly editions to make specific editorial decisions transparent. The critical reports of the first 17 NGA volumes were separated from the music-text sections – similar to the first volumes of other complete editions ongoing at the same time – in order to facilitate quicker publication of these music texts. Intended was, of course, the early provision of the labour-intensive reports, though as is so often the case, not only years but even decades passed before these became available and some of these are still lacking to this day. Since 1977, however, critical reports have always been published together with the music-score sections.

The NGA edition plan is following a different concept, in that the guiding criterion changed from scoring to genre. Instead of the 24 series (25, with the supplementary volume), there are now 13 sections. The originally-planned 40 volumes were expanded in the 1980s to a total of 56 volumes (43 of them currently published), to include also “early versions and authentic arrangements, furthermore larger fragments and more extensive drafts”. The plan is to finish the edition by 2027, the 200th anniversary of Beethoven’s death. The by then 66-year-long edition period may seem excessive compared to the four years of the old complete edition, but a look at the critical reports impressively shows what an immense amount of scholarship is displayed in these editions, which – with increasing competition from Urtext editions by other publishers – is very time-consuming in its efforts to resolve fundamental questions as well as to track down all the problems of detail. The last volume in the NGA, that for the 9th symphony, includes a critical report of no less than 140 pages that also confirms this lengthy wait as worthwhile. But only through this effort can the New Complete Edition be guaranteed to represent, like the Old one prior to it, the authoritative Beethoven edition for a long time to come. 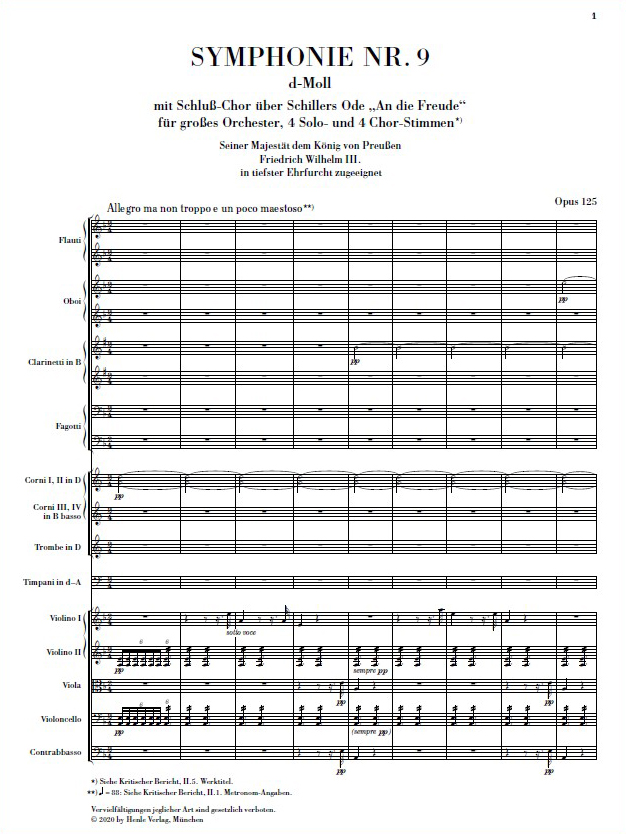