Almost exactly 20 years ago – as I had just finished my editorial work on the Missa solemnis for the Complete Edition [GA] – the Beethoven-Haus approached me about whether I might be interested in co-editing the GA’s final piano-sonata volume. Besides the three late sonatas I was also offered the “Hammerklavier” sonata. Who wouldn’t want to seize the opportunity there!

Alas, my initial enthusiasm then turned out to be unwarranted. I did my work, but my co-editor – I’m not mentioning any names – did not deliver. The volume has yet to be published in the GA in its entirety, I already withdrew as editor many years ago. I was at least able to publish the knowledge gained then regarding the “Hammerklavier” sonata’s genesis and sources in an extensive article within the Bonn Beethoven-Studien (volume 2).

Today, by contrast, I am working with the most wonderful partner imaginable, Murray Perahia. Twenty-two sonatas have already been published with him in new Urtext editions, and we’ve been dealing now for awhile with what is probably the most demanding project of all: the “Hammerklavier” sonata! Time now to get my 20-year-old article out again and to unfold the complicated situation surrounding this sonata’s sources and the unforeseen consequences for an edition. 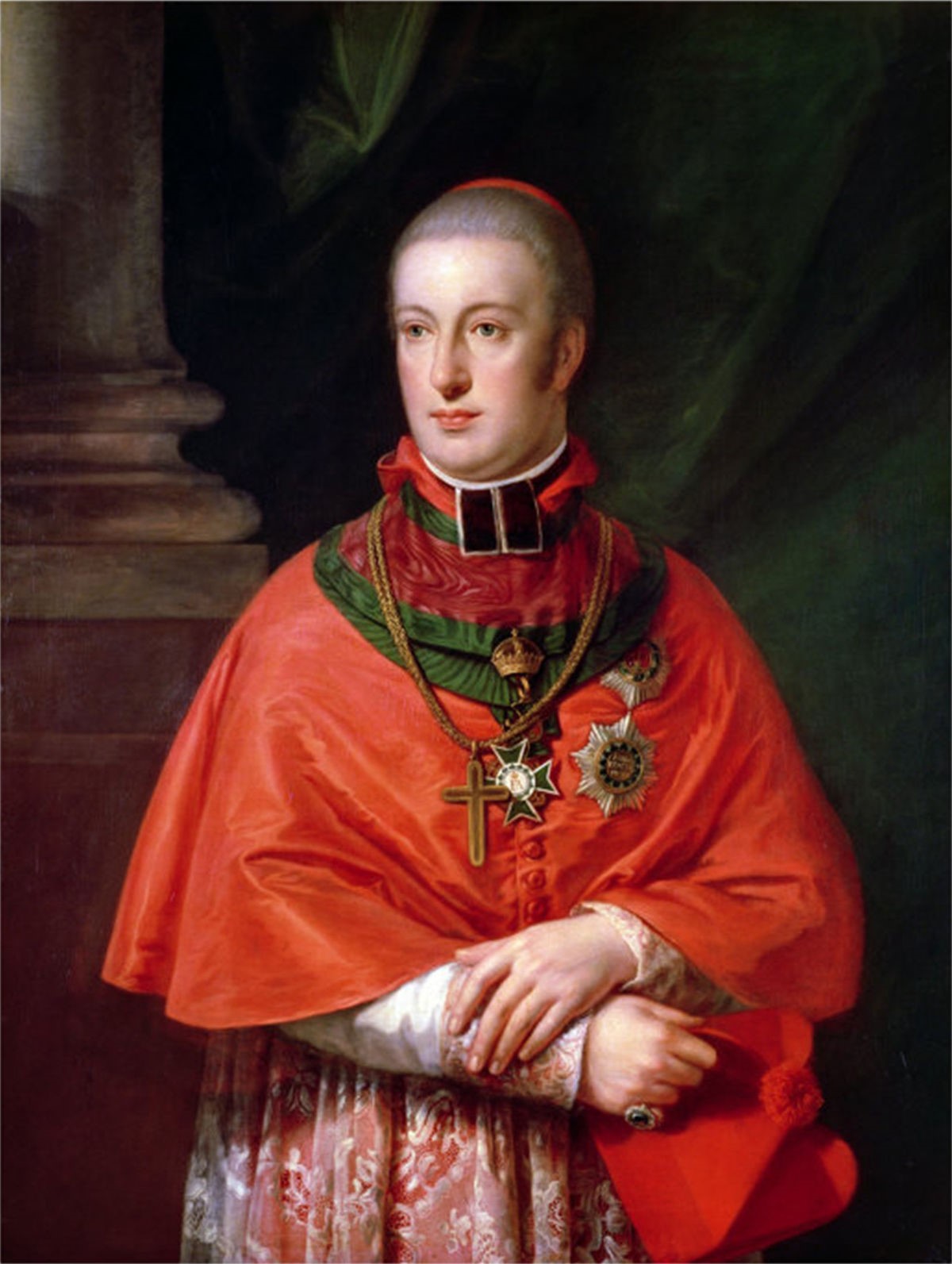 Archduke Rudolph of Austria, in whose music collection part of the op. 106 autograph found a home for at least awhile.

One of the tragedies of music history is that the autograph of the “Hammerklavier” sonata can no longer be located. Does it still exist? We don’t know. It had already been lost track of during Beethoven’s lifetime. The composer presented part of it in March 1819 to Archduke Rudolf, his patron and piano student (who certainly could not have played the sonata), but it was not entered into the catalogue of the archduke’s music collection – perhaps Beethoven even reclaimed it for proofreading copies or prints of the sonata. There’s not even a trace in the composer’s estate listing of 1827 – conceivably, his Viennese publisher Artaria and Comp. obtained it as a proof of ownership, in addition to a copy that was to serve as engraver’s model. 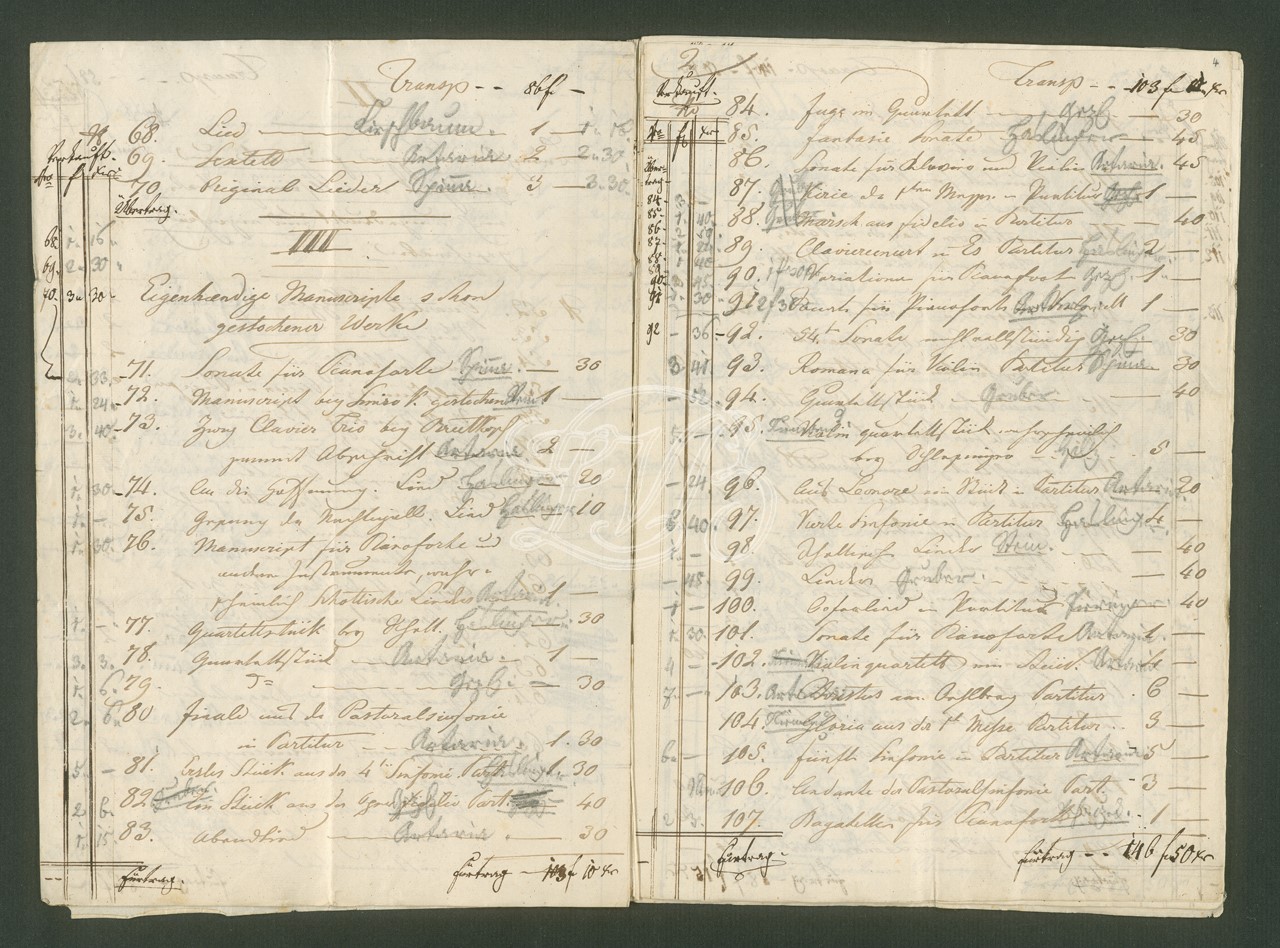 At least two copyist copies must once have existed, for Beethoven sold the sonata to two publishing houses, Artaria und Comp. in Vienna and Regent’s Harmonic Institution in London. In correspondence with his former student and subsequent composer colleague Ferdinand Ries, of whom more details later, he describes the difficult situation of producing these copies:

‘I find it incredible how there could be so many errors in the copy of the sonata, haste may be to blame, and that the copyist did not do the work himself but had someone else do it, only upon playing through the exemplar that is still with me [Ries lived in London] were the errors found, some of them may perhaps also have been corrected earlier, […] the incorrect copying is probably owing to the fact that I can no longer keep my own copyist, as before.’ (Beethoven Briefwechsel Gesamtausgabe [Complete Correspondence Edition], letter no. 1294)

Publishing houses had long since stopped accepting for publication any autograph manuscripts – his handwriting was an imposition for the engraver and in many details ultimately no longer decipherable. Required, therefore, were copies that Beethoven himself proofread before despatching them, though we know that he was largely a miserable proofreader. And if the whole matter still occurred under time pressure, it obviously went doubly askew, as in the case of the “Hammerklavier” sonata.

So, we are lacking the autograph and both engraver’s models. It is hardly a consolation that preserved has been a fragment of a list of corrections which Beethoven sent to Ries in London, together with the above quoted letter. 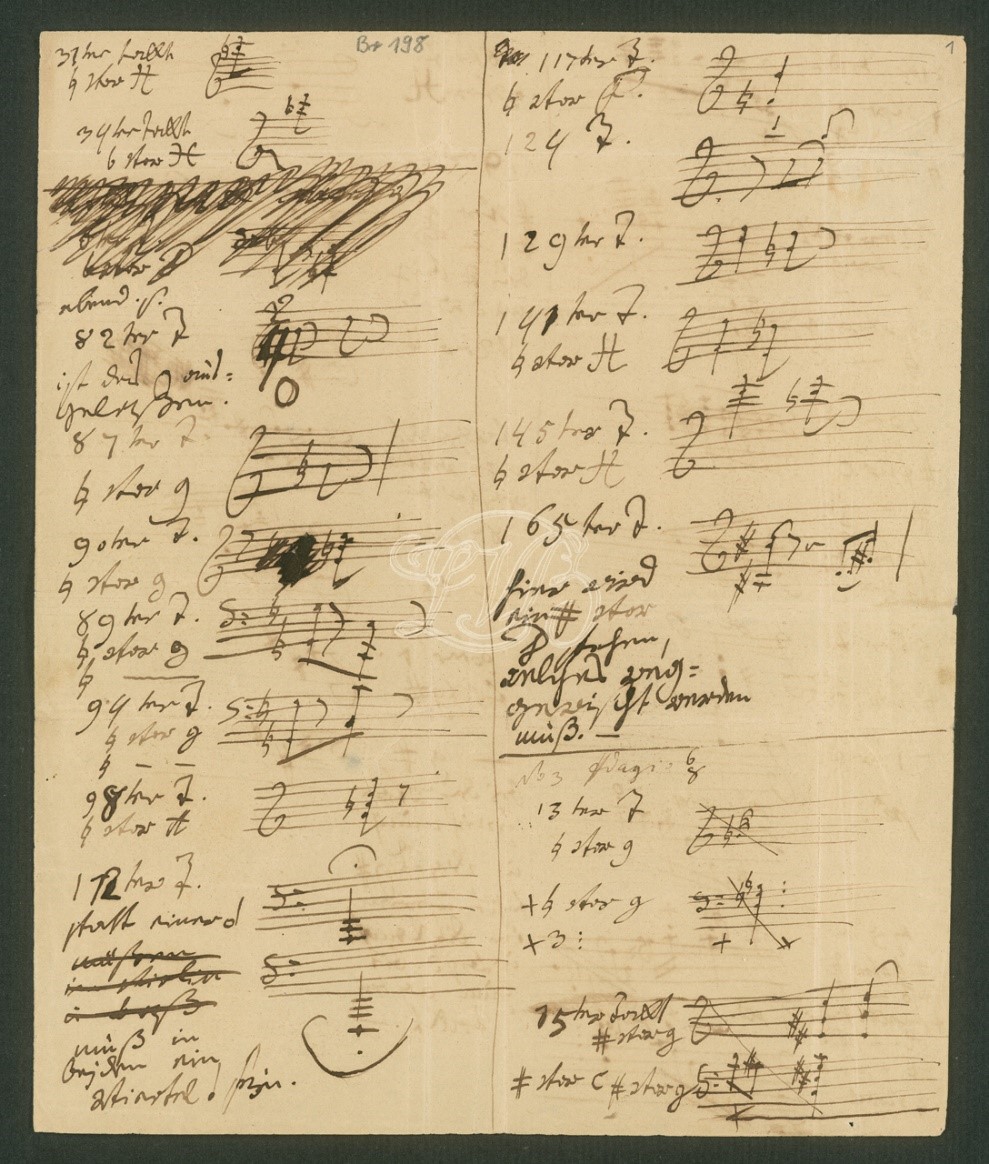 This list mentions 144 measures where addenda and corrigenda are to be made. Predominantly listed are references to accidentals (50 measures are in error, 28 measures with Beethoven’s added cautionary accidentals). But there are also additions and/or deletions of notes and rests, corrections of pitches, note values, pedal markings, etc., though strikingly absent are any sort of changes or revisions by Beethoven in dynamics and articulation markings.

Another copy of this correction list must also have been available to the Viennese publisher, for corrections from this list have been made in both Vienna and London original editions – with a few minor errors.

An unusual document can perhaps provide a little surprise. In the Fitzwilliam Museum in Cambridge there is a brief Beethoven notation, consisting of the 1st and 2nd measures of the slow movement, with the indication: ‘Nb: valid here must be the 1st measure, the 2nd remains as before.’ The leaf with this annotation comes from the Artaria publishing house. It proves beyond any doubt that the first measure of the slow movement was inserted into the sonata as a later afterthought. In a letter Ries also received notice of this inserted measure for the London edition (Beethoven Briefwechsel Gesamtausgabe, letter no. 1309).

Sketches of the “Hammerklavier” sonata abound, though the majority have yet to be deciphered and legibly transcribed. Take a look at the works’ catalogue of 2014 where there are 34 entries alone for this sonata’s sketches that are scattered all over the world.

In terms of manuscripts for sonata op. 106, the source situation is therefore extremely poor. Also, the miserable condition of the engraving models described above by Beethoven himself, leads to the fear that original editions produced from them will not be gratifying to us in preparing the edition.

So it is! Let’s start with an assessment of the “simpler” case, the Viennese original edition: 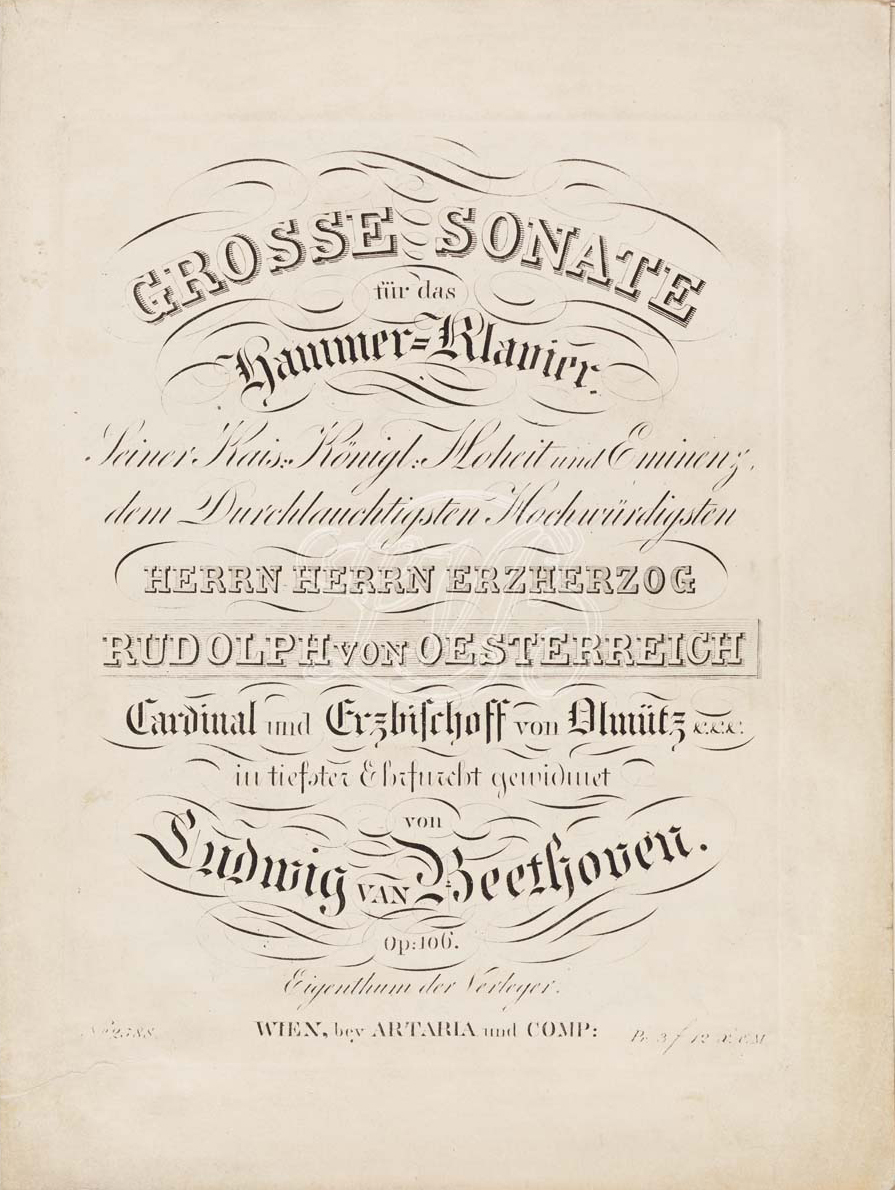 Illustration with kind permission by the Beethoven-Haus Bonn.

It presents the sonata with the movement order that is generally accepted today as certainly intended by Beethoven – by no means a matter of course, see below, – including the slow movement’s first measure that was added very late, and also the metronome markings that were likewise probably first added late, and are hotly debated even today (they were despatched to London some four to five months after the engraver’s model). All changes from the list of corrections have also been incorporated. Arising from Beethoven’s letter to Artaria in July 1819, two months before publication, is also the fact that the composer proofread at least once a galley proof of the print (‘Enclosed I am despatching the proofs and believe [them to be] error-free.’ Beethoven Briefwechsel Gesamtausgabe, letter no. 1317). For Beethoven’s qualities as proofreader, see above! Consequently, there is an original Viennese edition with numerous errors and ambiguities in the music text. Almost 50 accidentals are missing, and there are two obvious errors in the print. After this issue of the print had been released, Beethoven intervened again in three places, though this did little to enhance the generally poor text status of this print.

No autograph, no proofread copies, a problematic Viennese original edition. Yet it gets still worse!

In May 1818, thus more than a year before the editions appeared, Beethoven contacted Ferdinand Ries in London to support his sale of two compositions within the English jurisdiction of London:

‘I would wish that you would see the following 2 works, a large solo sonata for piano [op. 106] and a piano sonata that I myself transformed into a quintet for 2 violins, 2 violas 1 cello [op. 104] brought to a publisher in London’ (Beethoven Briefwechsel Gesamtausgabe, letter no. 1258)

Beethoven must have sensed that he had entrusted Ries with a difficult task in conveying this revolutionary sonata. He was prepared to make astonishing compromises:

‘if the sonata should not be right for London, then I could send another one, or you can omit the Largo and immediately begin the last piece right at the fugue [following here is an incipit of the fugue subject], or the first piece then the Adagio and for the 3rd the Scherzo and omit entirely no. 4, together with the largo and Allo risoluto, or just take only the first piece and Scherzo as [the whole sonata]. I leave this to you, as you find it best, for the moment it would really be too much for me to write a new one’ (Beethoven Briefwechsel Gesamtausgabe, letter no. 1295).

To recapitulate once again the options he offers:

There was, in fact, a publisher in London, the Regent’s Harmonic Institution. The second option was exercised, the 4th movement was published separately. 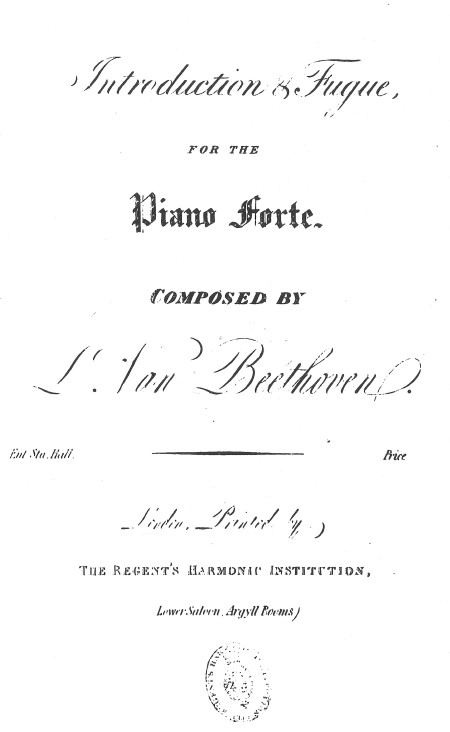 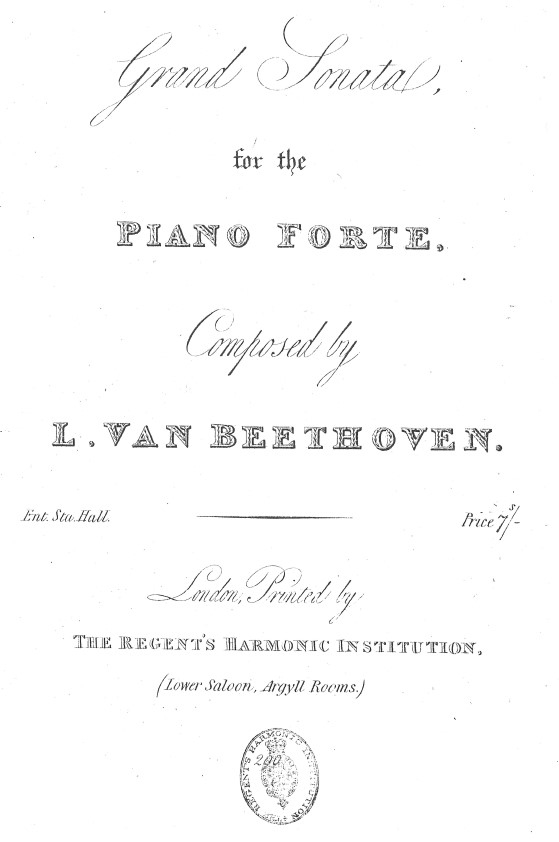 Are there still musicians today who think that this set of movements can be performed as a work constellation?

Another anomaly in the London print: The subsequent pitch restriction of the musical text to c4, taking into account the instruments of the time. Passages going beyond this range were banished to ossia staves, other solutions were to be found in the main music text – certainly not by Beethoven himself. 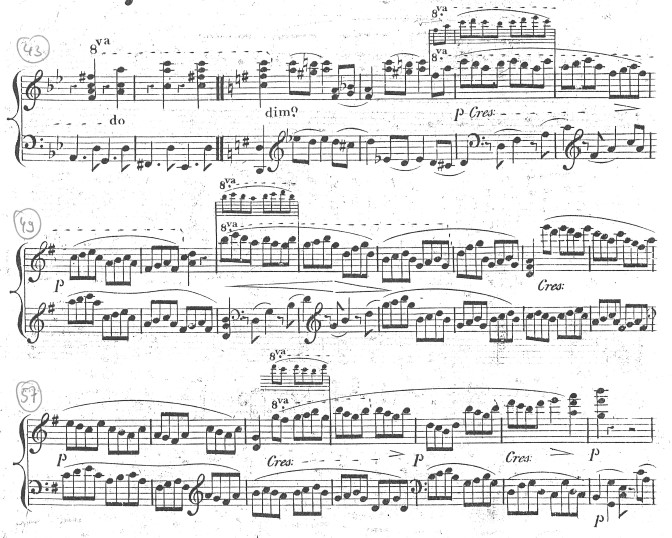 Weighing in more heavily for an edition are, however, the numerous direct “editorial” interventions made in the music text in London:

Finally, the most problematic intervention from today’s perspective: The London print contains much more articulation than the Viennese. Signs were not only added sporadically but also frequently systematically. A particularly striking example, the already mentioned added 1st measure of the 3rd movement:

Today, we have to assume that all these “editorial” interventions in the music text were done without Beethoven’s authorisation. Rather, in the article I mentioned at the outset, I compiled numerous indications that Ferdinand Ries, to whom Beethoven wrote ‘ I leave everything to you’ (letter no. 1258), supposing that he had the composer’s trust, would probably have “helpfully” lent a hand here from the perspective of the pianist, composer colleague, proofreader and friend – and yet unfortunately, as in the Viennese original edition, overlooked numerous errors. Through his action, he produced, though, a “contaminated” source that compels us to devalue it accordingly for the edition.

To summarise briefly: The original Viennese edition is the only source that can be used as the main source in a modern edition for creating the music text of the “Hammerklavier” sonata. Owing to the indirect dependence of the London edition on the autograph – via the missing engraver’s model despatched to Ries – it must be considered as a secondary source. Some sections of the text that raise questions in the Vienna source may be confirmed or corrected by the London source. (Once the sketches are completely transcribed, we could get further clues for clarifying unresolved textual problems.)

Does this whet your appetite for more? I did, of course, have to be brief here and neglect many aspects that I could delve into more deeply in my article. You’ll find the article in the Bonn Beethoven-Studien, volume 2, of 2001 in your well-stocked library or here.

And, of course, the new edition from the Gertsch / Perahia workship will also follow soon!