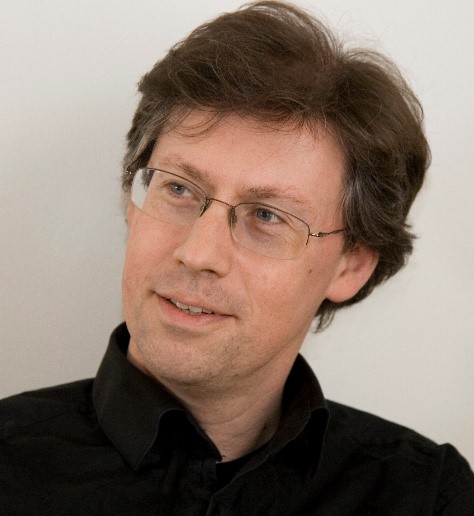 Today we’d like to continue our series of musicians’ views on Beethoven, begun in February, by interviewing the British pianist Ian Fountain. He is responsible for the fingerings in the Henle Urtext editions of Beethoven sonatas (HN 894) and variations (HN 913) for cello and piano, in collaboration with David Geringas who has done the cello markings – as demonstrated in the CD recording of Beethoven’s Sämtliche Werke für Cello und Klavier [Complete Works for Cello and Piano] (SWR Music/Hänssler Classic, 2011). Fountain will also continue to provide the fingerings in volume 2 of the revised edition of the Beethoven piano variations (HN 1269), which includes the Diabelli Variations op. 120 that he recorded in 1997 (CRD Records).

Peter Jost (PJ): How important in general is Beethoven’s piano music in your concerts as well as in your instruction of students?

Ian Fountain (IF): When I was a teenager, Beethoven’s music wasn’t particularly at the top of my list. Mozart got to me a fair while earlier. Beethoven was more difficult to ‘grasp’ at that stage. I started with the later sonatas and found myself working backwards; I played the “Hammerklavier” when I was 18 and that really ‘opened the door’ for me. I can see a similar pattern amongst many students, in particular the popularity of sonatas opp. 109 and 110; perhaps because these pieces look forward more explicitly towards the introverted romanticism of Schumann.

Nowadays I feel equally drawn to the early music. There’s an almost elemental thrill in playing those ‘single-digit’ opus number pieces, which are so energetic and physical – teeming with ideas and life.

I also came to realise there might be a closer connection here with the later style than we might recognise. I remember the first time I played the five piano and cello sonatas in the same concert (which makes for a great programme). After the two explosions of energy that make up opus 5, things felt more serene with the joyful op. 69, and the mystical op. 102/1. But, when starting the final D major sonata I was suddenly conscious of how clearly the composer had returned to the physical vigour and rigour of the early op. 5/1. I hadn’t made that connection before, despite playing the sonata countless times. And maybe there’s a clue there: that Beethoven’s progress was a bit more complicated than the straight line we might imagine. Certainly, the density of content and the grandeur of the enormous slow movements are strong common features of the early and late style. What went on in between? That’s an open question.

PJ: Characteristic features of Beethoven’s music are a dynamic, propulsive moment in the fast movements as well as sometimes very brusque accents, the famous Sforzati. Are there other attributes in his piano compositions that can be considered typical?

IF: Let’s consider the sforzati for a minute, as they are such an important feature, and so hard to get right. I think it’s worth remembering the word ‘sforzato’ has its Italian roots in sforzare, meaning ‘to make an effort’. Beethoven throws obstacles into the path of the music, often in the most awkward and inconvenient places. He wants to interrupt our fluent progress to say, hang on, this needs underlining, or saying again. It’s essentially argumentative: a harmonic dispute that has to be escalated before it can be properly resolved.

Also crucial is the switch from ‘forte’ to ‘fortissimo’. Often there’s the effect of a barrier being swept away – a breaking free of restraint. The performer needs to have a conscious strategic plan of what lies in front of him. And the same goes for the other end of the dynamic scale. It’s a common mistake to play ‘piano’ too softly. I feel ‘piano’ in Beethoven means play in a full, round, well-fed sound, and then a pianissimo, when it arrives, makes its proper impact. One of my favourite examples of this is at the beginning of the “Tempest” sonata op. 31/2. The strange opening gesture is a mysterious pp, and then a short flurry of activity leads to a sf and resolution. But this last dominant chord (measure 6) must absolutely not be too soft, or the pp continuation – referring back to the beginning, now in an unexpected C major – has already had the secret given away.

We might try to think the same way at the beginning of the fourth piano concerto. Every pianist wants to impress the audience with their most perfectly delicate and breathless G major chords, more often than not adding an extended ritenuto in the last two measures for good measure. But it’s the orchestra’s continuation – in B major, pianissimo – which must sound other-worldly.

PJ: In your eyes, was Beethoven more of a revolutionary or a traditionalist in his piano music?

IF: I don’t think either description is accurate. Beethoven is habitually labelled a ‘revolutionary’ (often by wannabe revolutionaries) but I think that’s a bit of a misleading cliché. A revolutionary desires first to destroy the existing order. That’s emphatically not what we hear in the music. He dedicated his first sonatas to Haydn; and he absolutely accepts and embraces the established frameworks of sonata form, variations, etc., not to mention the great shadow of Haydn’s string quartets as the starting point for his own inventions. What he did do was to imagine and develop those forms in a way no one had done before. We can see it straight away with the four-movement format of the early sonatas and the sheer daring of the opus 1 trios. Even then, this overall impulse to break new ground is sometimes waylaid by some strange U-turns and retro glances. Pieces like the septet or the sonatas opp. 22, 28 and even 31/3 feel strangely old-fashioned and even formulaic in places.

I think it’s really the visionary quality which defines Beethoven. Take the piano concerto no. 5 (first mvt.) at measure 268. At the equivalent point in the opening section (measure 111), the soloist declaims the grand main theme of the movement.

Here, however, at measure 268, Beethoven has the theme suddenly absent itself and we are left with just the bare harmony for two measures, alone, a pattern then repeated through a chain of strange keys. It’s an incredible moment – we hear a glimpse of what lies behind the ‘public information’ of the music. 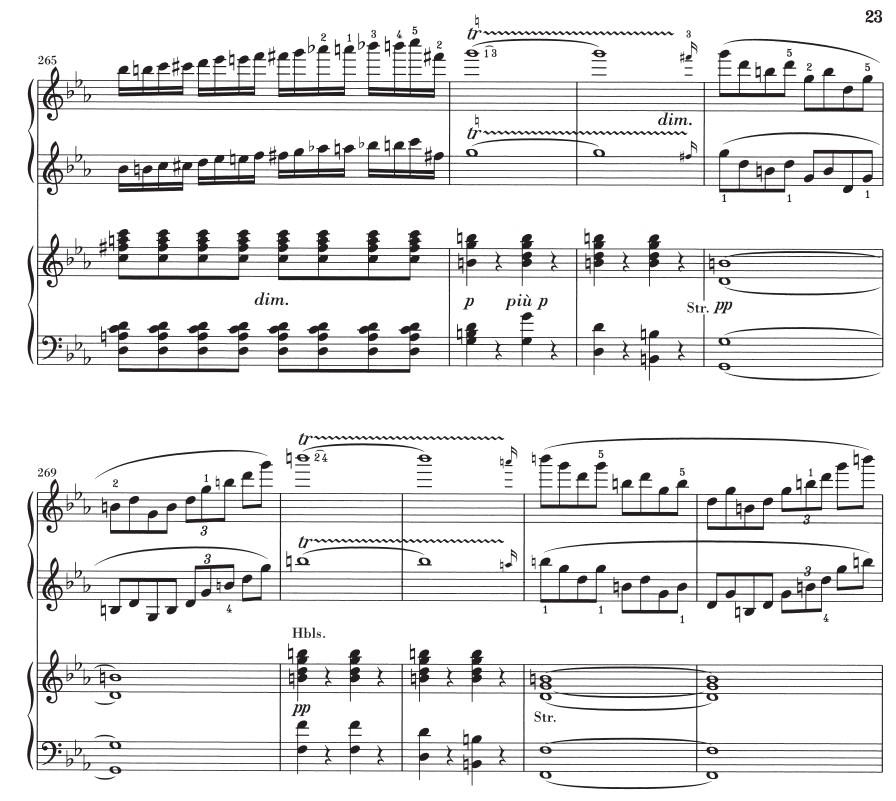 These visionary moments – as much as the harmonic tangles of the Grosse Fuge – are the things it took a Beethoven to do.

PJ: Almost all the great composers of the 19th century did their musical training at the piano. Nevertheless, there are big differences as to whether their piano works are idiomatic. How would you classify Beethoven’s piano music? Or to put it another way: how comfortable or uncomfortable is it for your hands?

IF: Every composer ‘feels’ a certain way in the hands. The particular challenge with Beethoven is that he combines the precise transparency needed in earlier composers – all performers know the feeling that every flaw is mercilessly exposed – and the weightiness and scale required for Brahms. He’s right on the intersection. The concertos are a particular challenge in this sense. They require huge amounts of stamina and physical strength. The finales in particular contain some of the most difficult writing there is for the piano.

We all know by now, and every student is dutifully instructed, how much the sound of string quartets lies behind Beethoven’s piano writing – undoubtedly true. But it’s maybe not a one-way street. Often we hear a pianistic spirit appear in the quartets. The wonderful passage in the finale of op. 131 (measure 56 onwards) seems to yearn for the world of the Chopin ballades, and doesn’t the demonic episode in the finale of op. 132 (measure 125 onwards) recall the thorny crossed-hands trio in the scherzo of the op. 110 sonata? 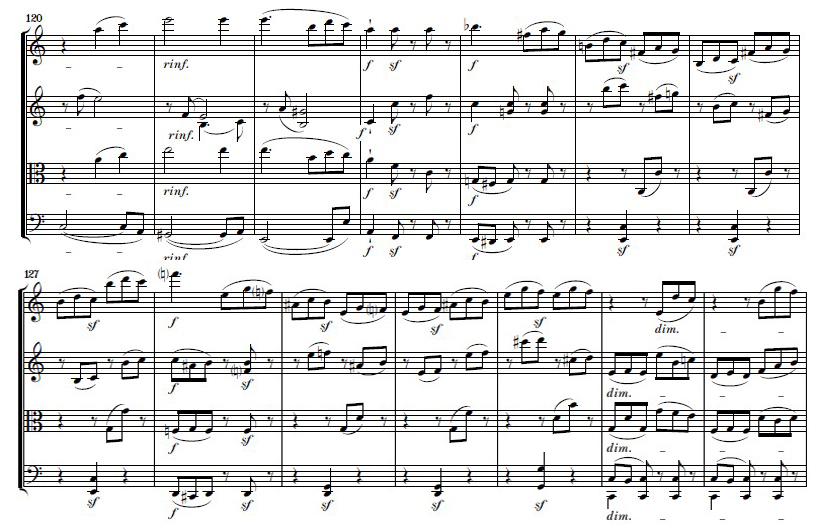 IF: Very much so. I find it fascinating. When you gave me the task of writing the fingerings for the variations, I had to decide at whom my efforts should be ‘aimed’ – a sight-reader, a student, or simply my personal way of doing things. My ‘ideal audience’ was a (mythical) gifted student who would exactly share my concept of the pieces and would be learning them for the first time. Fingering is just one thread in a big web – it is dependent on tempo, pedalling, the shape of the hands and body, and one’s whole picture of the music. That’s before we come to the question of whereabouts on the key you might strike with your third or fourth finger!

Personally, I do a considerable amount of finger ‘substitution’, crawling complicatedly about from one note to the next. It’s an instinct – my way of encouraging a sustained sound and keeping it alive in my ear. But it would be ridiculous to write all this in a score (although in a few places like the beginning of variation 30 in the Diabelli I did try to hint at this).

PJ: You did the fingerings for both piano solo compositions as well as for piano parts in the Beethoven chamber music. Are there, aside from the parts’ different function, any fundamental differences in the piano writing of these two genres? And what are the consequences of your fingerings?

IF: It’s a good question. There is a huge range of pianistic styles in the chamber music, and I wonder if Beethoven felt somewhat freed from the quartet texture that hovers over many of the piano sonatas; there’s an almost Mendelssohnian surface brilliance involved in the E flat violin sonata op. 12/3, or the cello sonata op. 5/2 that’s rarely heard in the solo music, except perhaps in some of the wilder extremes of the Eroica or Diabelli variations. Because the touch needs to be lighter here, it does require us to use the fingers differently; for example in the violin sonatas the pianist’s right hand is often ‘relegated’ to a middle voice under the violin line, and the left hand often plays a more melodic role, similar to a cellist in a string trio. And then there’s the question of how to give a meaningful ‘forte’ without overpowering the string sound – a subject all of its own!

PJ: Thank you very much for this interview.