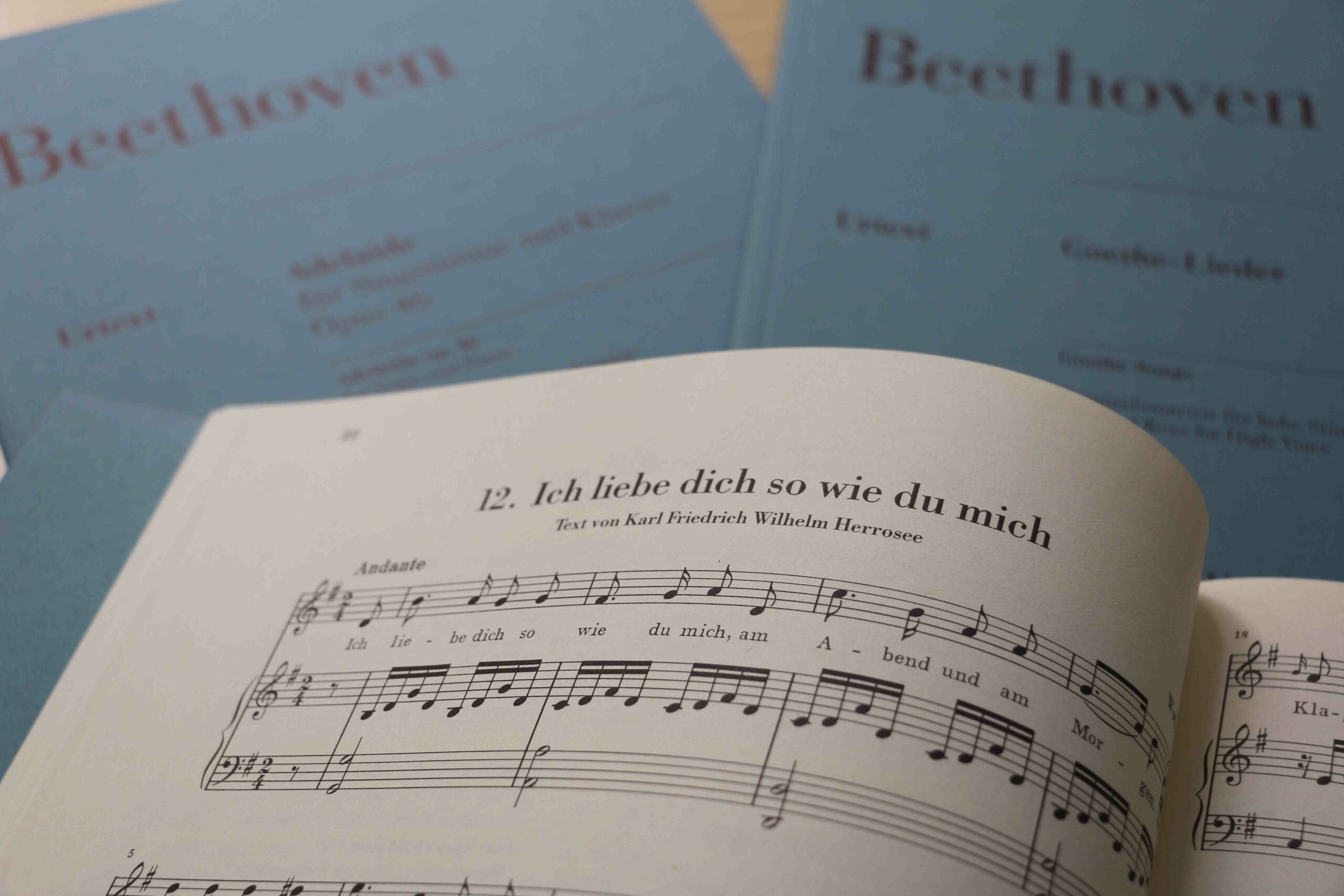 Although the melody of the 9th Symphony’s choral movement, “Freude schöner Götterfunken” (Joy, beautiful spark of the gods), is most likely one of Beethoven’s best known tunes, it is the composer’s instrumental work that is primarily linked today to his popularity and musico-historical significance: The 32 piano sonatas as the “New Testament of piano music”, the 9 symphonies as the milestone in symphonic music, the string quartets as the epitome of Goethe’s idea of conversation amongst “four reasonable people”.  So far, so good, but as vocal music editor at Henle publishers, I naturally look at the matter somewhat differently – and with this post I’m inviting you to a little stroll through the whole range of Beethoven vocal works that we have ready for you here at Henle.

Quantitatively, Beethoven’s output for the human voice is already immense, as I came to realise in detail several years ago whilst editing the new Beethoven Works’ Catalogue: Vocal works constitute just under a fifth of the opp. 1–138 listed there in the first volume. But would you have thought that in the second volume reserved for works without opus number, the so-called “WoOs” 87–205 and 220–228 would still come to well over a hundred music settings, from arias, choral works, folk-song arrangements and lieder with piano accompaniment to canons and musical jokes?

Indeed, with the more than 70 canons and jokes one can hardly speak of a classic “work” in the emphatic sense, especially when these come to settings (surprisingly numerous!) of the first name “Tobias” adorning the letters Beethoven wrote his publisher Tobias Haslinger. Also certainly not part of musical world literature is the canon “Esel aller Esel” (Jackass of all Jackasses) WoO 227 underlaid with donkey sounds…. Though amongst these occasional compositions there are also charming musical miniatures such as the six-part canon on Goethe’s words “Edel sei der Mensch, hilfreich und gut” WoO 185 or the practically philosophical “Wir irren allesamt, nur jeder irret anderst” WoO 198, originating in Beethoven’s last year of life and representing to a certain extent with its four measures, his final “completed composition”. The often encoded canons gave Beethoven’s contemporaries and today’s editors stuff to ponder, as discovering where and in which register the next voice should enter is often not at all trivial. In this respect, we can be particularly excited about the Beethoven Gesamtausgabe (Complete Edition) volume underway that is to be devoted to these works. (By the way, you can already conveniently listen to these rarely performed pieces in the Beethoven-Haus digital archives – go ahead and check it out now!) 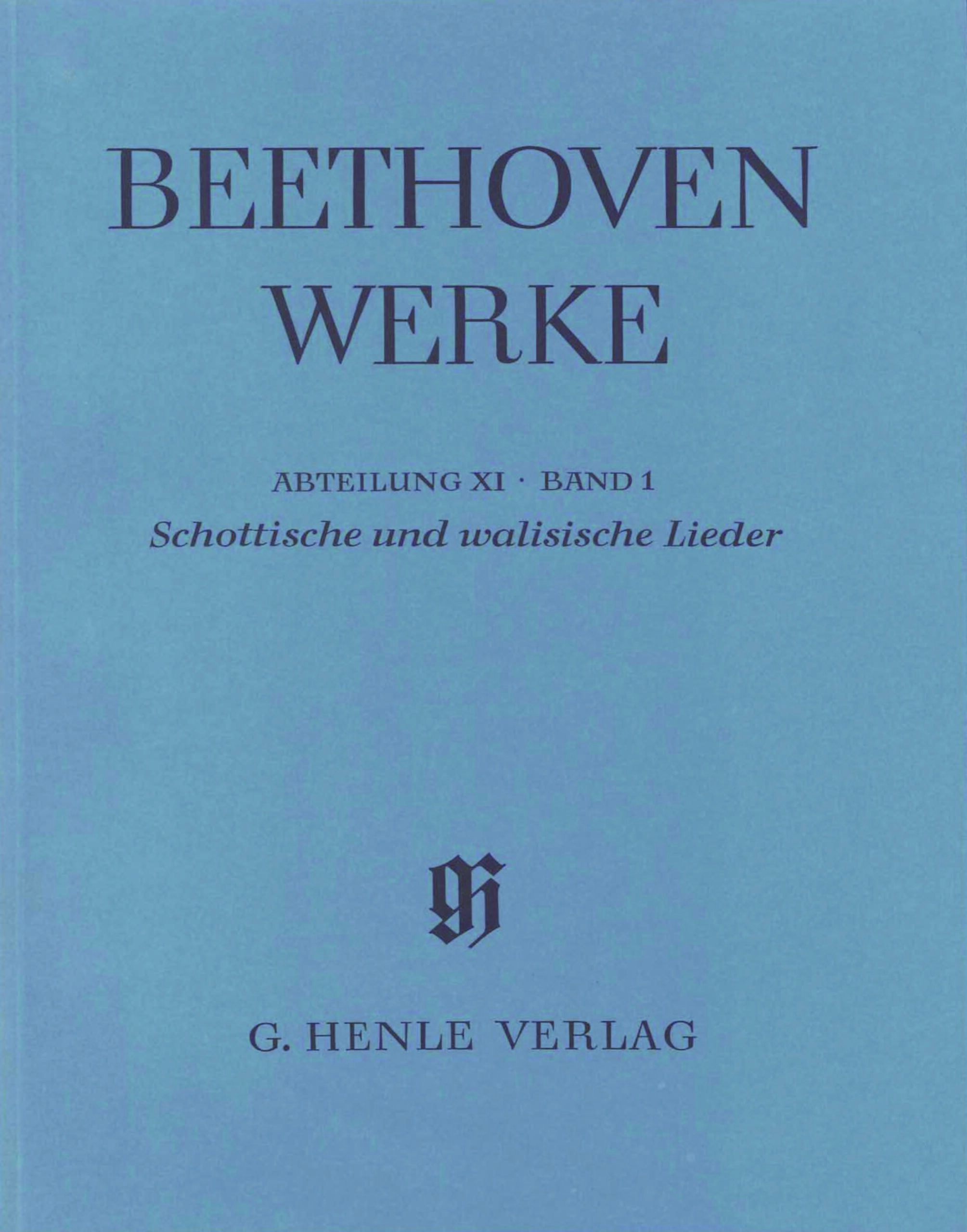 Likewise included within limits amongst the “vocal work” is Beethoven’s contribution to George Thomson’s encyclopedic enterprise, to publish Scottish, Irish and Welsh folk songs in arrangements by contemporary composers such as Beethoven, Haydn, Weber or Hummel. Here, the composer was given song melodies by Thomson and was supposed to compose “only” an accompanying movement for piano trio, for which, that is to say, the principal made clear whether here he wanted to have a prelude or an interlude, and sometimes requested revisions if the piano piece appeared to be technically too demanding or inappropriate for the “artless melody”. The fact that despite such restrictions Beethoven created more than 160 such arrangements between 1810 and 1820, a majority of which has since appeared in the Beethoven Gesamtausgabe can hardly be explained by the rather modest remuneration.  In truth, a certain ambition must here perhaps have captivated the creator of great chamber music. For in his accompaniment Beethoven always establishes new and surprising references to the given melodies, ranging from jolly round dances to melancholy airs, which make these pieces – alas, little known today – a feast for singers and the best musical entertainment for listeners. 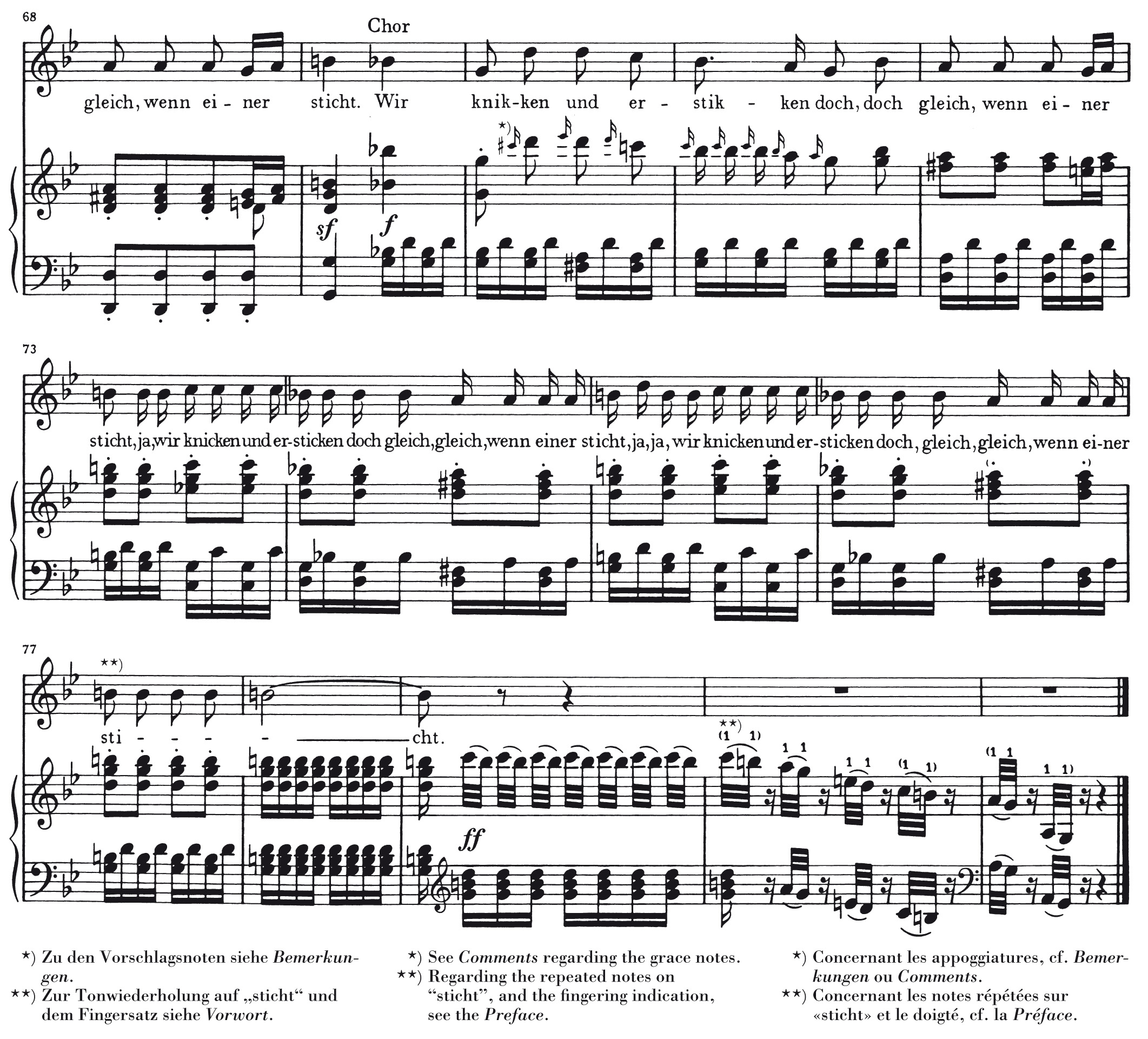 But other lieder are also worth closer consideration: a few years ago, we put together with the Beethoven-lied specialist Helga Lühning a volume of Beethoven’s Goethe settings, located in which is not only Klärchen’s touching “Freudvoll und leidvoll” from Egmont, but also the expressive Mignon from Wilhelm Meisters Lehrjahre. Besides the famous “Kennst du das Land?”, opening Beethoven’s 1810 Sechs Gesänge op. 75, there is also the little sister work “Sehnsucht” WoO 134, in which Beethoven set the poem “Nur wer die Sehnsucht kennt” to music – four times, in fact! For when he was commissioned in 1808 to compose a Goethe poem for the literary journal Prometheus, he did indeed have ideas enough, but evidently no time to work them out into a completely successful lied. So, he sent his autograph with several versions to the no-doubt somewhat baffled journal editors, noting at the outset: “Nb: I did not have enough time to produce something good, therefore several attempts.” Only the first of the four versions appeared in the journal in 1808, but two years later all four were to be published in a separate edition, thus granting contemporaries a very interesting insight into the master’s musical imagination. 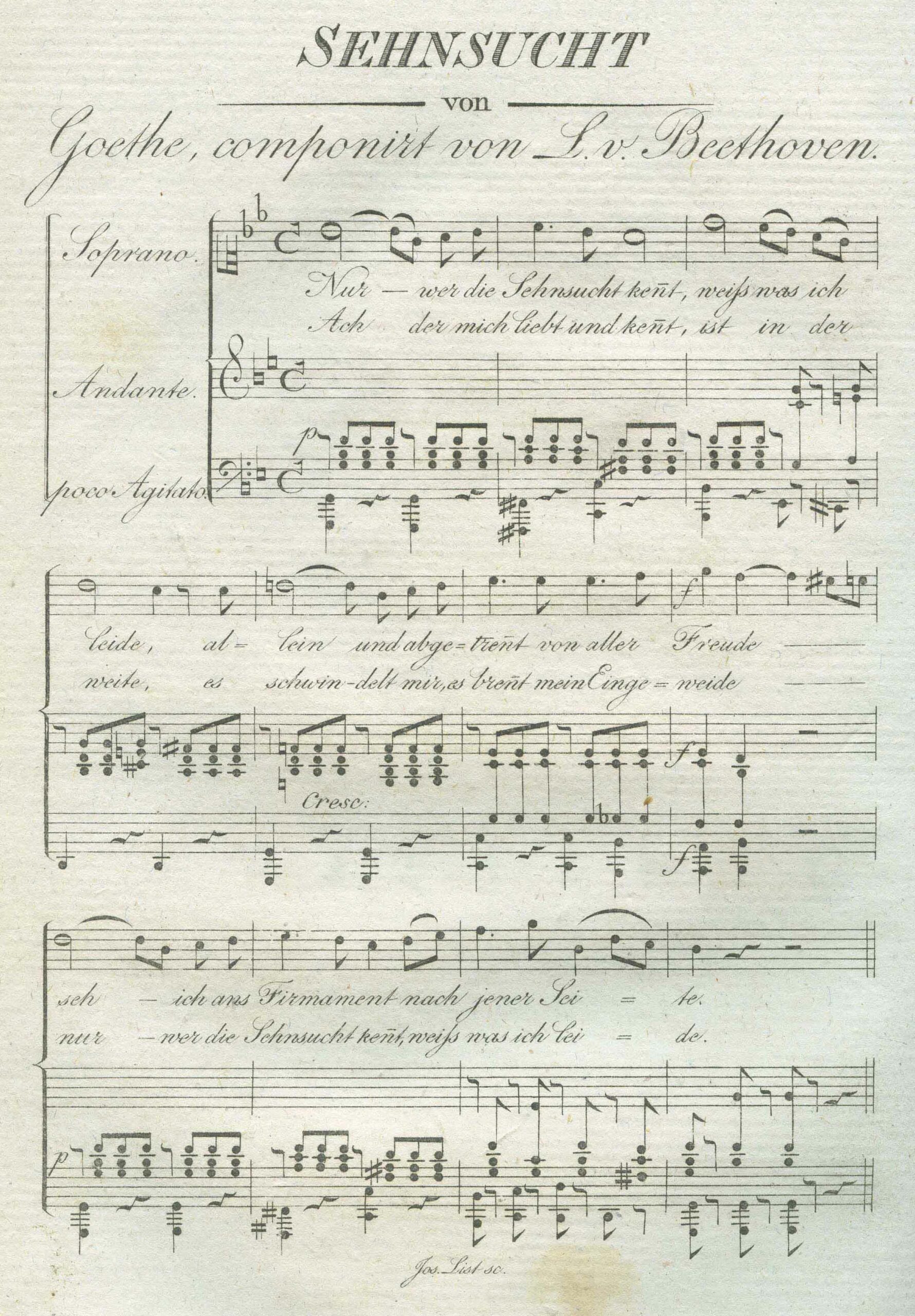 A further insight into Beethoven’s workshop is provided by another collection of soprano arias plus a duet and a trio in the Henle catalogue, specially assembled for practical use. It includes in addition to the famous “Ah! perfido” op. 65, also such largely unknowns as the scene and aria “No, non turbati” WoO 92a on a text by Pietro Metastasio, coming from Beethoven’s lessons with Antonio Salieri in the winter of 1801/02. The autograph manuscripts identify three progressive stages: Beethoven’s first inscription of the full score, then Salieri’s correction entries, and finally a re-inscription of the vocal part in which Beethoven sometimes takes Salieri’s corrections (especially of the diction) into account but also makes other changes. The synoptic representation of the three stages that editor Ernst Herttrich chose for the Beethoven Gesamtausgabe was, of course, not an option for a practical performing edition – but we were able to incorporate the two versions, before and after Salieri’s intervention, into our edition, making both usable in practice for the first time through the piano reduction by Joseph Kanz.

Does this whet your appetite? Then, have fun leafing through the Beethoven vocal section in the Henle catalogue!