Last May my colleague Norbert Gertsch dealt with Beethoven’s relationship to an instrument that’s not usually the centre of attention: in his case, this was the viola (read his blog post here). We will deal today with a perhaps even more “esoteric” instrument, namely, the trombone.

From the Beethoven research point of view, that sounds like a very curious side issue – for after all, Beethoven composed only a single work especially for the trombone that’s hardly amongst his important main works: the Three Equali WoO 30. The trombone also shows up rather seldom even in Beethoven’s orchestral works.

From trombonists’ perspective, though, Beethoven served their instrument very well, for these Three Equali simply are amongst the few original compositions of that time for solo trombone and an integral part of their repertoire. But even more importantly, Beethoven is considered the founder per se of trombone scoring in the symphony, with his 5th and 6th symphonies’ having introduced and established the trombone for the first time as a member of the symphony orchestra. “For the first time” is really not entirely correct, as there had already been individual examples of symphonies with trombones (more on this in a moment), but the date of the premières of both the Fifth and Sixth in the same concert, 22 December 1808, could mark the birth of the large, Romantic symphony orchestra.

And since all the composer’s symphonies are available in the Beethoven Complete Edition reference music text, it’s time for a quick tour of his symphonies from the trombone’s standpoint! 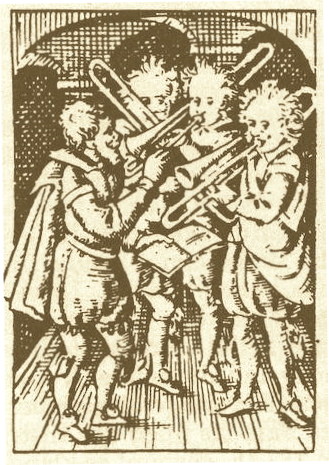 That the trombone had to be “rediscovered” at all for the symphony orchestra at the beginning of the 19th century, whilst other brass instruments such as horn and trumpet had long since been established there, is owing to the special path it had taken since the 16th century. This was because the trombone of all the brass instruments was alone in achieving, since its development in the Renaissance, all the chromatic notes with absolute purity of intonation by means of its continuously adjustable slide. Available in different sizes (alto trombone, tenor trombone, bass trombone), furthermore, it covered a large compass, had a dynamic range from pianissimo to fortissimo, and its clear and noble sustained tone was considered to be particularly akin to the human voice.  Trombones were therefore ideally suited to support vocal parts in complex polyphonic compositions and were preferably used for these reasons in conjunction with church choirs and in sacred works. The trombone has not lost this close connection with church music and its solemn-sacral character over the centuries; with its equivalent connotation of the transcendent, it was also used in the opera, whether in Monteverdi’s Orfeo, Gluck’s Alceste, or by Mozart in Don Giovanni and The Magic Flute.

The construction of the baroque trombone was, incidentally, so technically and sonically sophisticated that it did not undergo basic change for several centuries.  The trombones that Beethoven had at his disposal hardly differ from those for which Gabrieli or Schütz wrote. Compare these two images in the MIMO online instrument museum:

The baroque and classical trombone tone is much leaner and more delicate, owing to the instrument’s construction, than that of a modern trombone. These instruments cannot be expected to produce a deafening blare; the trombone in Beethoven’s time has a distinctive and excellently-projecting sound that is radiant in its higher register, but its absolute sound volume never overpowers other instrumental parts.

In which of his compositions does Beethoven actually use the trombone? Here is a chronological overview of all the relevant works (click to enlarge): 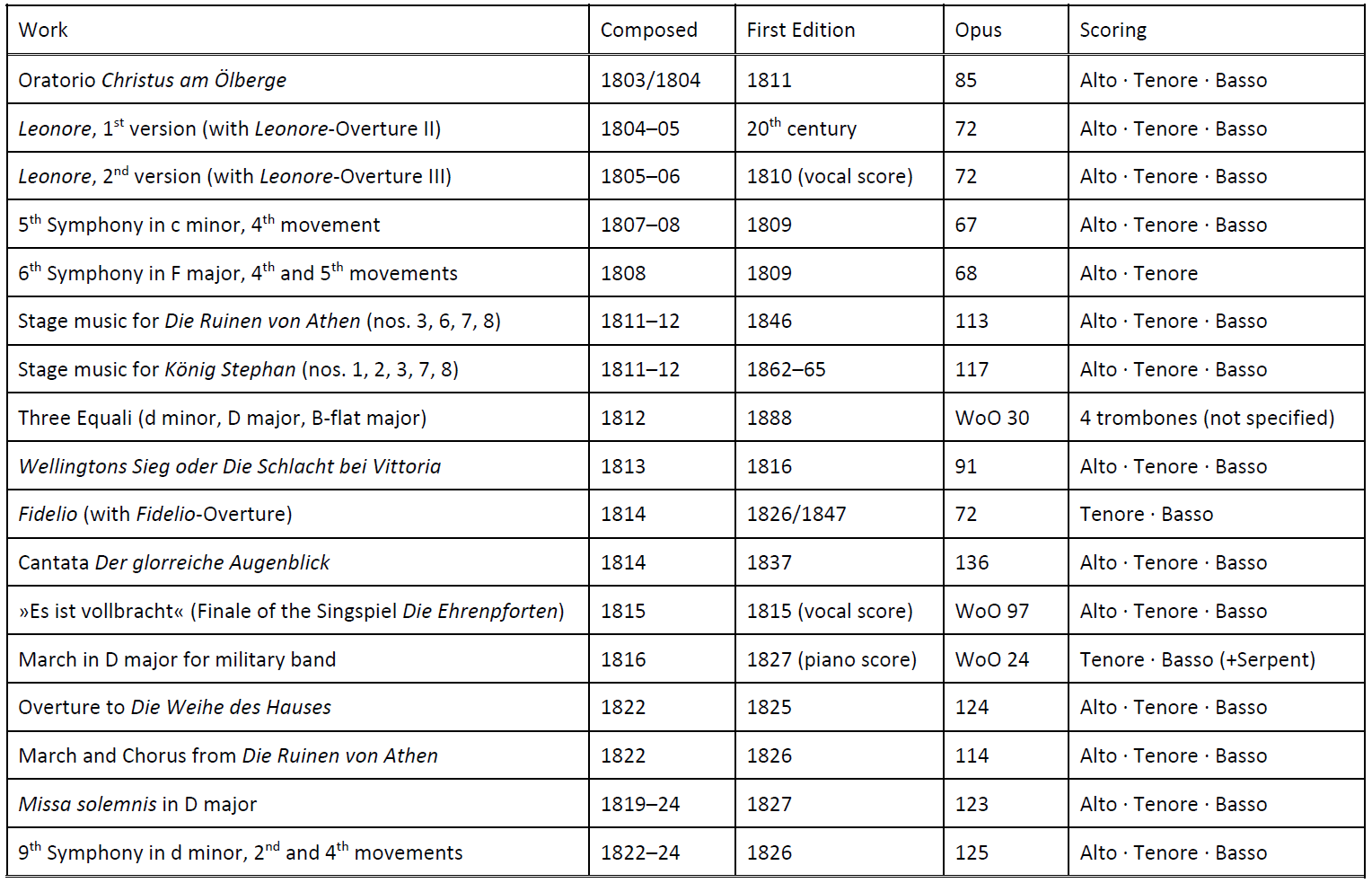 As the last column shows, Beethoven usually uses trombones in triple scoring, alto–tenor–bass. The three parts enable the trombones to play the complete chord, sounding particularly effective. Only in the 6th symphony and in Fidelio is a paired scoring sufficient for him, as was also typical with trumpet and horn.  Whereas in the Sixth Beethoven chooses the high trombone pair (alto/tenor) for the sharp sound effects in the thunderstorm movement, in Fidelio he uses the low pair (tenor/bass) with great effect for the gloomy dungeon scene in the 2nd act.

Unsurprisingly, the use of trombones in Beethoven’s sacred and stage works is in keeping with the tradition mentioned above. What is innovative and pioneering, though, is the fact that (and of how) he uses the trombones in three of his symphonies: the Fifth, Sixth and Ninth, from which a few examples are shown below.

In his 5th symphony, Beethoven calls for trombones for the first time in one of his orchestral works; and it can be said that he was the first to establish the trombone firmly within the symphony orchestra (in the sense of a permanent new feature), even though individual earlier orchestral works in which trombones appeared have been discovered by resourceful researchers: for instance, within a divertimento by Michael Haydn, or within a symphony with 3 trombones already composed in 1768 by the Salzburg composer Joseph Krottendorfer. The Swedish composer Joachim Eggert also composed a symphony using 3 trombones in 1807, hence just a year before Beethoven’s Fifth.

In his 5th symphony Beethoven saves the trombones until the final movement, where they underline as a special effect the radiant breakthrough from the preceding C minor to C major. 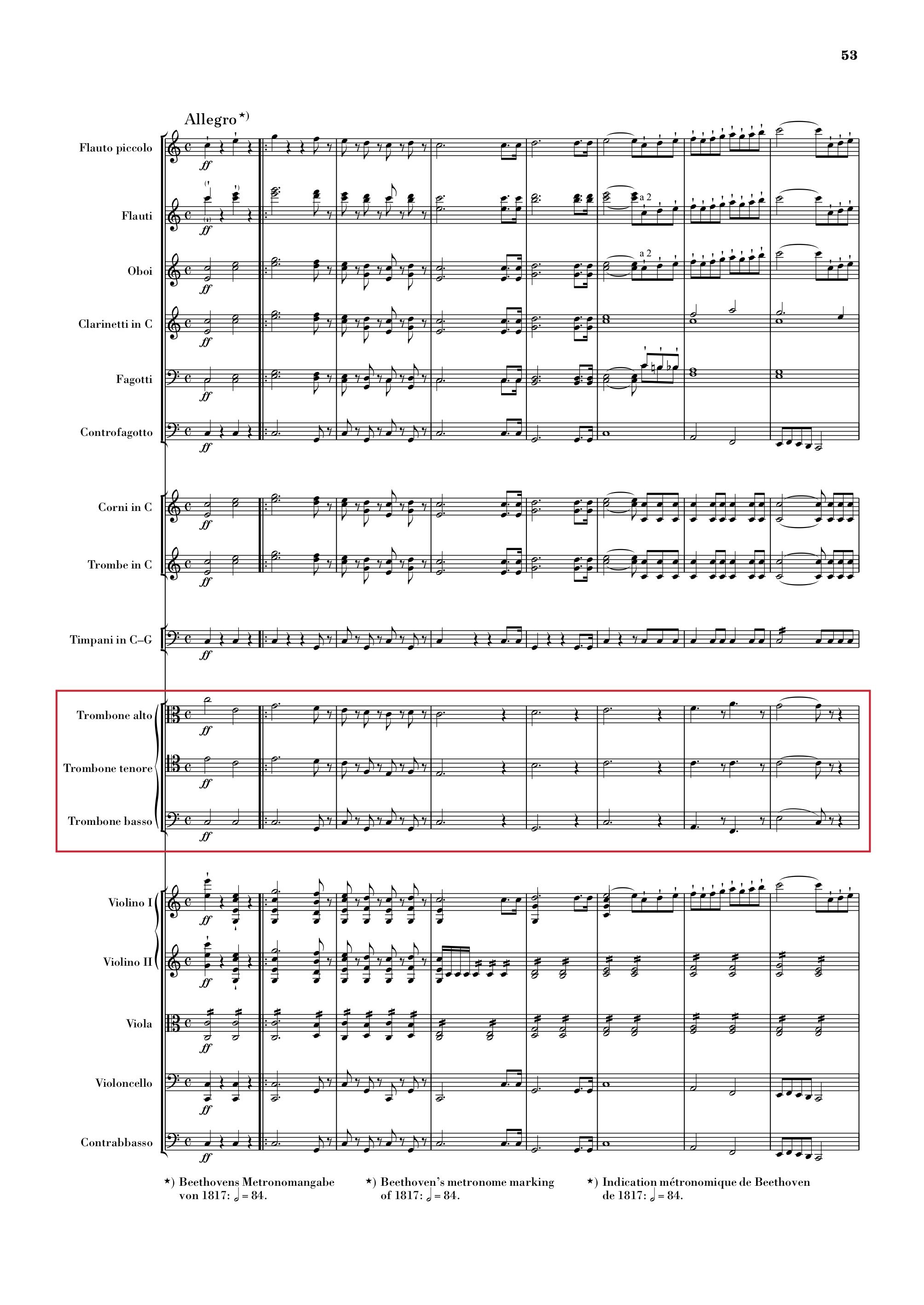 Here, the trombones reinforce the tutti – notable is the trombones’ independent voice-leading, not linked to any other part, as other composers so often did. But Beethoven also assigns solo moments to the trombones in the final movement, e.g., the suspenseful, chromatically-rising motif in mm. 113–118: 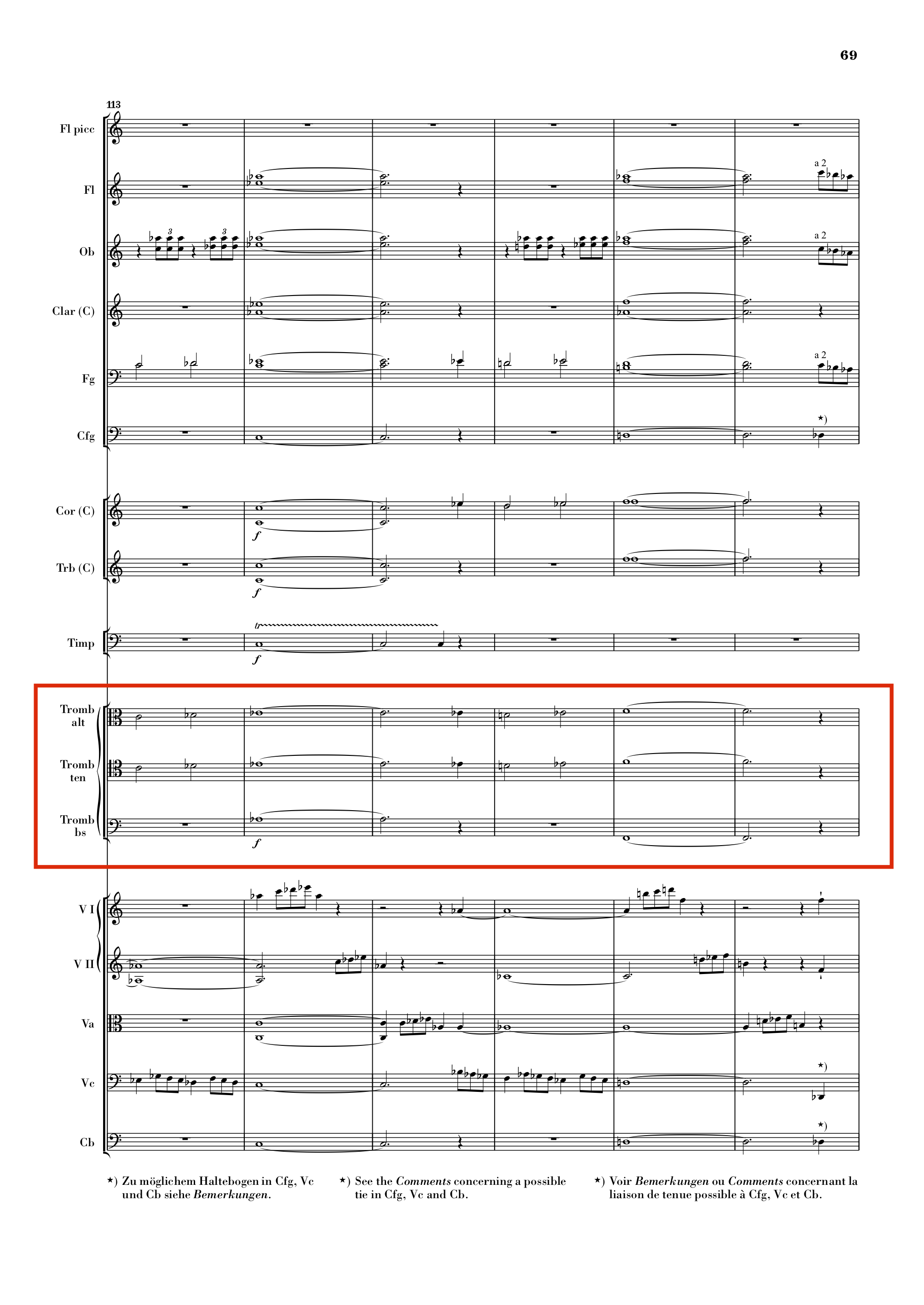 A comparable sound enrichment can be observed in the 6th symphony, the Pastorale. As mentioned above, Beethoven uses only 2 trombones, the bass trombone is missing in this case.  Here, too, he delays the entry of the trombones until the 4th movement to achieve a special sound effect: in the “thunderstorm”, the trombones are added from measure 106 onwards as the final intensification in describing the storm: 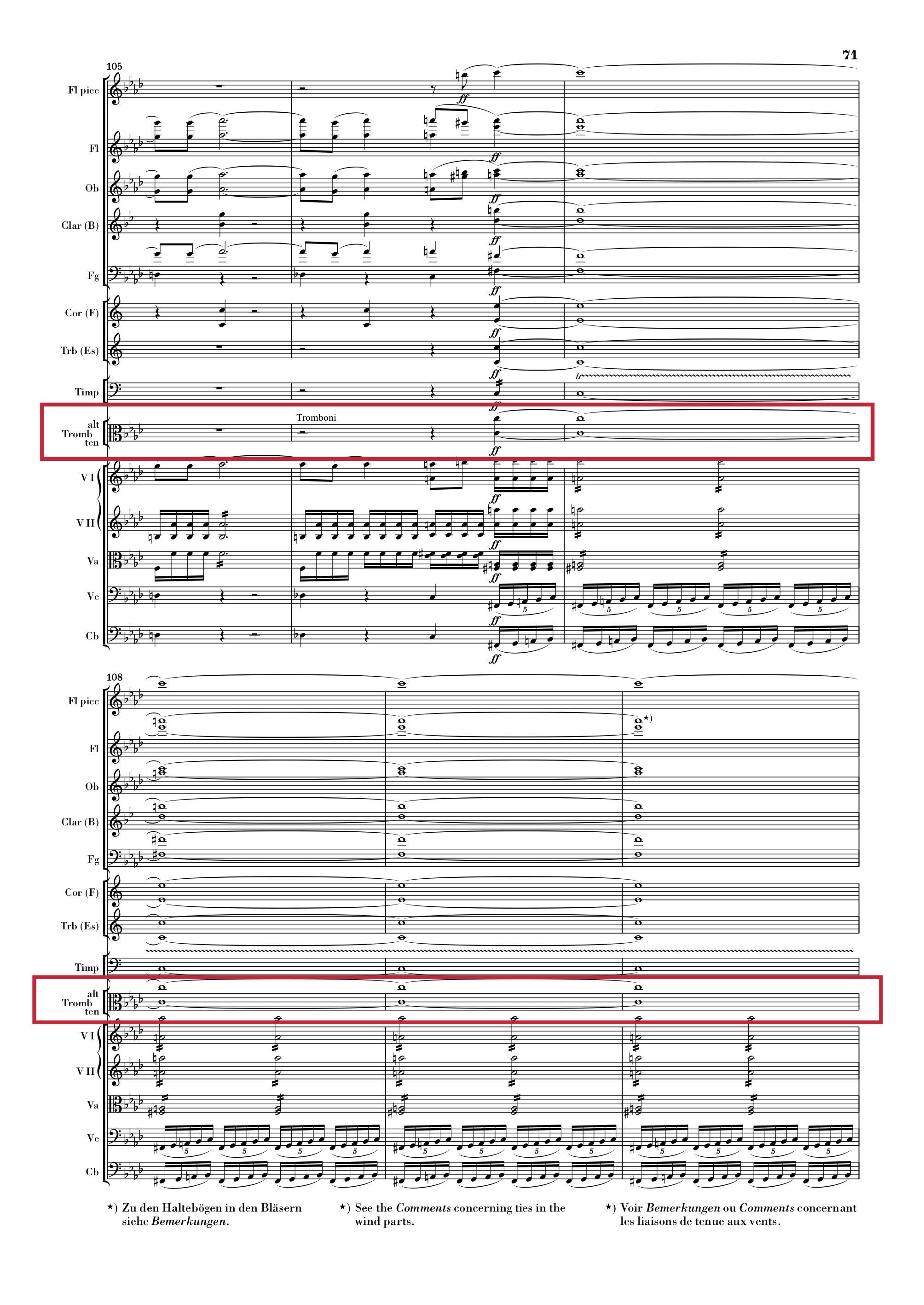 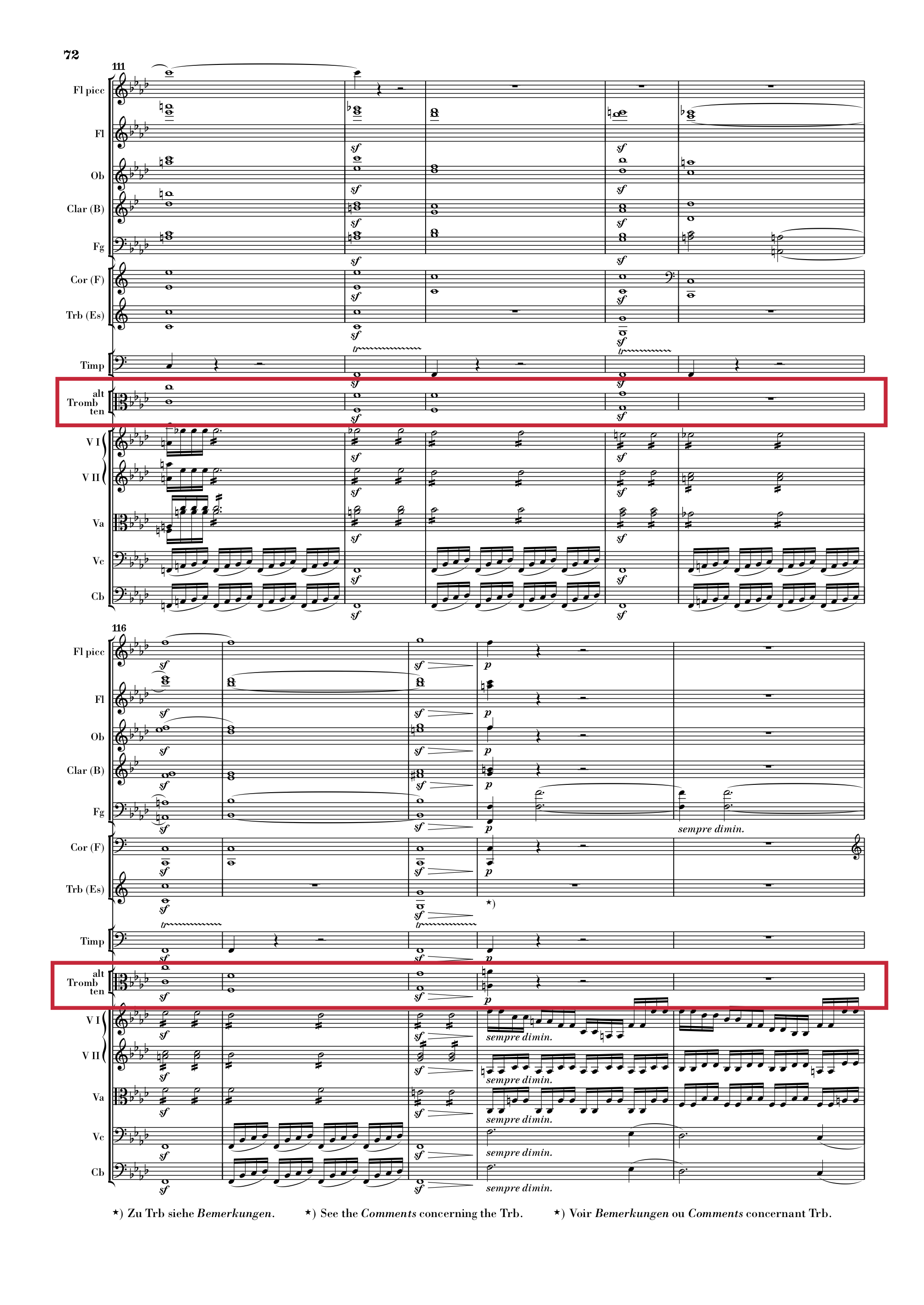 In this passage the two trombones always play in octaves, just like the trumpets and horns; the 3 brass pairs thus complement each other to form the respective chord (e.g., on the first usage in measure 206 for the diminished triad a–c–e flat). This chord splitting and the “hollow” octaves, especially of the two rather high trombones, contribute to a sharpness of sound that is very appropriate for the visual glare of the thunderstorm scene.

In the final movement of the Pastorale, the trombones are less prominent but used in a way similar to that in the 4th movement: long sustained tones reinforcing the tutti, but often now in thirds and not in such a high register. Here, contrasting with the garish storm scene, the trombones lend the chords additional radiance, or, to quote the Beethoven researcher Willy Hess: ‘With an astonishing mastery, Beethoven now knows how to utilise the glory of the two trombones in the sense of a wonderful glow – the evening sun, throwing its last rays on the rain-refreshed flood plains.’  [Willy Hess: Die Posaunen im Orchester Beethovens, in: Schweizerische Blasmusikzeitung 47 (1958), p. 418]

In the following two symphonies, nos. 7 and 8, Beethoven again foregoes trombones, showing that for him this scoring is not yet standard, that the addition occurs only as required and as a conscious sound-apparatus reinforcement. Even in the 9th symphony, the trombone parts as we know them today were not included from the outset; Beethoven probably decided only shortly before the première in May 1824 to expand these parts, as shown by a score of the trombone part that he wrote out separately. That the trombones support the vocal parts in the choral finale is nothing new, coming as it does from a long tradition. But Beethoven also uses trombones in the 2nd movement, the scherzo. Here, the bass trombone takes on a remarkable solo role – it seems veritably to silence the orchestra with an energetic interjection before the opening of the trio: 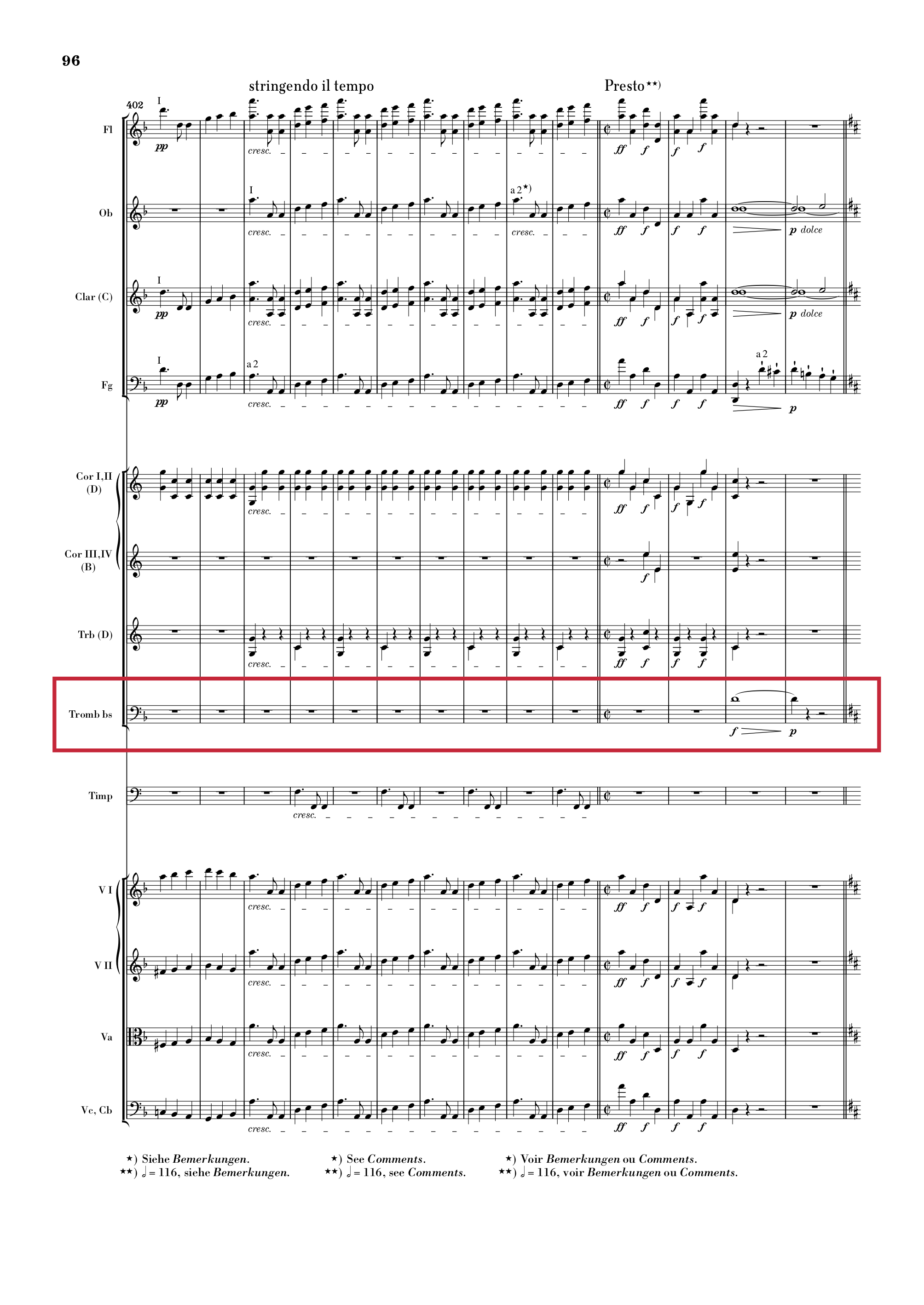 We seem today to take this individual treatment of the trombone scoring for granted. A contrasting comparison shows how innovative Beethoven was in his day. The following trombone part comes from Joseph Haydn’s ora­torio Die Schöpfung [The Creation], composed in 1796–98, thus not much earlier than Beethoven’s 5th and 6th symphonies.  Here, the bass trombone is treated as a “brass bassoon”, so to speak, in the chorus “Vollendet ist das große Werk”, and is consistently performed colla parte with the other bass instruments: 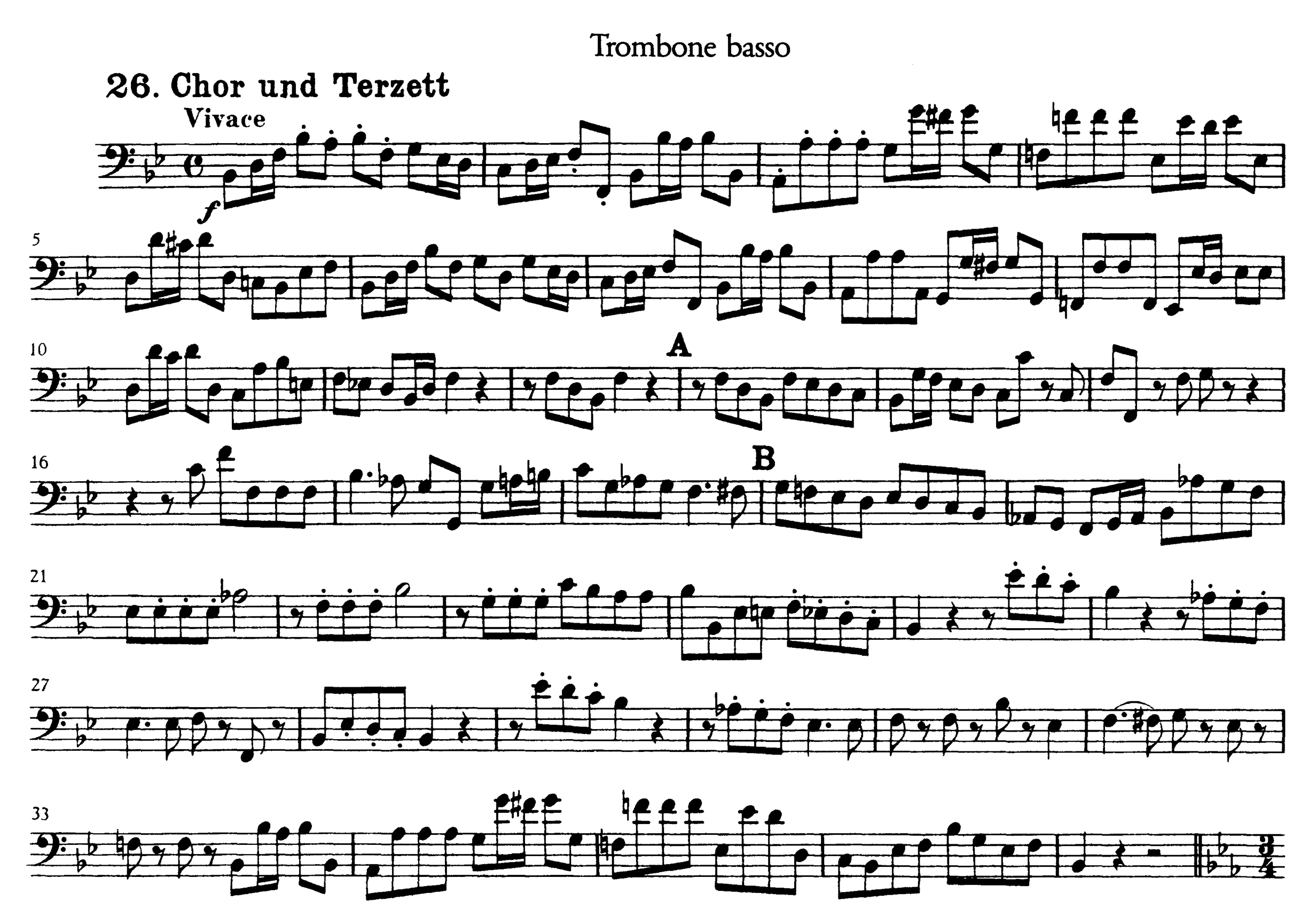 The non-stop eighth-note motion with many large interval jumps, which can easily be managed on the cello or bassoon, is a very big challenge on the historical bass trombone, especially in the lower register due to its long slide, and it does not really fairly reflect the instrument’s characteristics.

Beethoven’s notation shows, though, a great understanding of the trombone’s special technical and sound properties. He saves the use of the trombone for special moments, reinforcement effects and tonal sharpening, and does not treat it like an added organ register, but as an individual instrument with independent voice leading. It is noteworthy in this context that Hector Berlioz in his orchestration treatise published in 1844 (Grand traité d’instrumentation et d’orchestration modernes) numbers Beethoven along with Gluck, Mozart, Spontini and Weber, as amongst the few composers who ‘fully realised the importance of the role of the trombone’ and utilised it with ‘complete understanding’.

Basically, the time around 1800 was definitely ripe for integrating the trombone within the orchestra: In the course of emancipating and aesthetically upgrading instrumental music, the symphony pushed for new expressive possibilities and an expansion of the sound spectrum, as shown by further instrumental innovations in scoring, for example, by the piccolo, contrabassoon or expanded percussion. But it took more than a Krottendorfer or Eggert, namely, a Beethoven, with the artistic rank of his symphonies, to help the trombone to a breakthrough. By him the trombone was “secularised”, freed as it were in his symphonies from its traditional religious context and used as a pure timbre value.

With this emancipation the foundation stone was laid for further development – Beethoven certainly had the most direct influence on Franz Schubert, who also inserted trombones to great effect within his late symphonies in B minor (the “Unfinished”) and C major, thus continuing further on the path towards the Romantic orchestra. And the next time you enjoy the stunningly beautiful trombone passages in symphonies by Johannes Brahms, Anton Bruckner or Gustav Mahler, give a moment of thanks to Ludwig van Beethoven, who pushed open the door here for these…