Illustration with kind permission by the Beethoven-Haus Bonn.

Beethoven as the great innovator of forms and genres generated by his predecessors – that has by now become indisputable common knowledge. And our Beethoven blog posts keep showing the numerous innovations, even in lesser-known detail, with major future potential. This most recently came to light in the post on the trombone, since Beethoven is regarded as the “founder of symphonic trombone scoring”.  Today’s topic goes another step further: Beethoven is mentioned not only as an innovator, but as actually the creator of a new genre type. The question mark in the title already indicates that the matter is not so simple as it initially seems.

To be considered when thinking about Beethoven’s orchestral music are first and foremost his symphonies and concertos. They so dominate concert programmes worldwide that his overtures, another important group of works alongside, threaten to pale in comparison. In fact, at least three of his overtures, Leonore III (HN 9046), together with the overtures to Coriolan (HN 9042) and Egmont (HN 9043), are firmly anchored in the concert repertoire, though their popularity is far from that of such works as the Eroica, the 9th symphony or the 5th piano concerto (Emperor).

As the following overview of the finished works shows, Beethoven’s overtures form a group of eleven compositions composed over about a 22-year period. 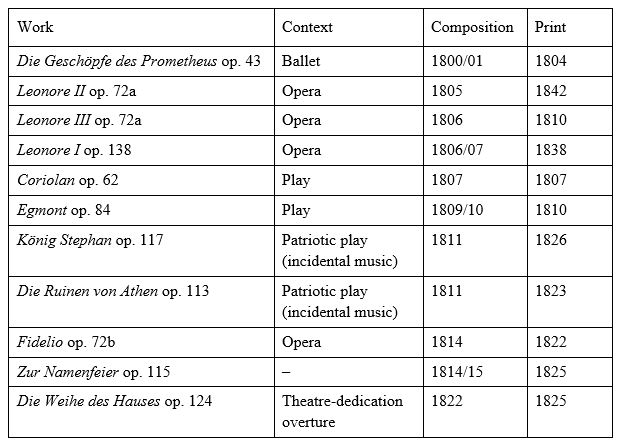 By 1800 the overture as a piece opening a stage or larger vocal work had already been a tradition for centuries, although repeatedly under different appellations.  Thus, well into the 18th century, an overture was often called “Sinfonia” or “Sinfonie”. When Beethoven composed his first overture it was already clearly separate from the symphony. Here is what Heinrich Christoph Koch’s Musikalisches Lexikon states in 1802:

‘The now more common introductory movements to large vocal pieces, which are called overtures, have an undefined and arbitrary form; they are generally given a form identical or similar to the first Allegro of the symphony. The overture’s character is also […] indeterminate, and generally conforms to the character of the vocal piece to which the overture serves as introduction.’

The ‘generally’ implies certain trends in form and character, though repudiating any guideline or even a norm. This genre’s particular historical situation was of advantage to Beethoven in that within certain limits it could be developed completely freely – form and character could be individually adapted to the subject.

As seen in the overview, the works originated on various occasions and under varying circumstances. With the exception of opus 115, later nicknamed Zur Namensfeier (referring to the celebration of the Emperor’s nameday), these were composed as “genuine” overtures to open an opera, a play or a festival. Beethoven wrote four overtures alone for various performances and versions of his opera Leonore/Fidelio and three for festivals opening new theatres – including König Stephan and Die Ruinen von Athen for the same event, the ceremonial inauguration of the German-language theatre in Budapest. These festival overtures are related to the overture to Goethe’s Egmont by constituting only the first part of more extensive incidental music.

A special case is the overture to Coriolan, a now-forgotten tragedy by Heinrich Joseph von Collin. At the beginning of 1807 Beethoven wrote merely an overture to this drama, presumably at Collin’s request. Its plot is located in ancient Rome: The general Coriolan, angered at being banished from the capital for disregarding the people’s wishes, allies himself with Rome’s enemies. When, however, the besieged city threatens to fall, both his mother and his wife prevent him from conquering his native city. Conflicted between love of country and desire for revenge, between cool reason and erupting emotions, he finally commits suicide.

As the tragedy had no longer been given in Vienna since 1805, the poet’s request was probably aimed at reviving his play. The drama was actually presented with Beethoven’s new overture on 24 April 1807 – although it continued like that, Collin’s Coriolan afterwards finally disappeared for good from the repertoire. But by this time the overture had already left its predestined path, for the composition’s première had taken place a month earlier within a private concert. Even when presented in the theatre, the music was no longer attached to the drama’s performance and had thus lost its original function as an introduction. The overture appeared in print at the end of 1807 and was performed several times as an independent concert piece in the 1807/08 season.

The title suggests relating the music form in sombre c minor with its two strongly contrasting themes to Collin’s dramatic plot, that is, in juxtaposing the quick-tempered, restless, torn hero (main theme) with the loving women imploring mercy (subsidiary theme).

Yet even Beethoven had to reckon with the fact that the listeners in Vienna recalled this plot either only vaguely or no longer at all. And to understand the overture does not require knowing Collin’s tragedy in the sense of immediately grasping from the expressive sound of the music the essential core – the reproduction of a tragic event. The scenic drama set in tones has become an independent instrumental musical drama.

With this work did Beethoven accordingly write the first concert overture in music history? That appears to be purely an academic question, but the explosive factor lies in the enormous history of its impact. The Coriolan overture is the start of the 19th-century’s overabundant programmatic music, ranging from small character pieces for piano to extensive symphonic poems. So, was Beethoven really the creator of this new genre type or was it more the prominence of his name that first posthumously gave it this rank? The question has yet to be conclusively answered. 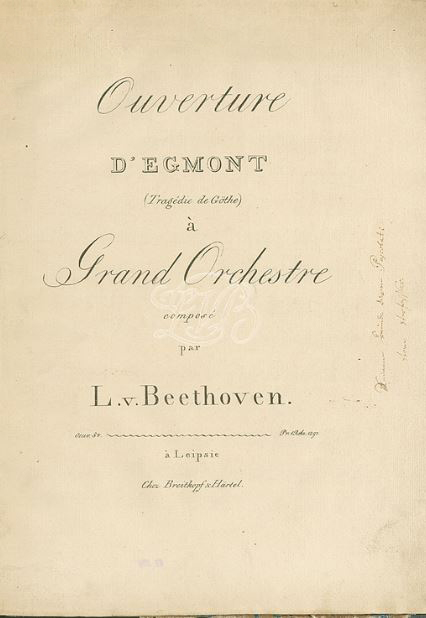 To be sure, he also resolved the issues relating to two other overtures originally written for specific performances of a stage work, by separately publishing in 1810 both the so-called overture no. 3 to Leonore composed for the reworked second version of the opera (1806), as well as the one to Egmont composed for the performances of the tragedy in the Vienna Burgtheater. Beyond question is the fact that Beethoven, perhaps encouraged by the successful performances of the Coriolan overture, already commented a year earlier in the sketches for the later overture Zur Namensfeier: ‘overture for every occasion or for use in concert’.

Before you, dear reader, settle down comfortably to listen to the three powerful overtures (again) with the Henle study editions in hand, I’d like to point out an interesting detail in the sources for the Coriolan overture. Beethoven published it with the title “Ouverture de Coriolan, Tragédie de Mr. de Collin” and dedicated it to the author – perhaps for very self-serving reasons, since he was planning further projects with Collin. In the autograph he headed the composition “overtura Zum Trauerspiel [to the tragedy] Coriolan Composta da L. v. Beethoven | 1807”, but immediately wiped it out again after inscribing “Zum Trauerspiel Coriolan” (see illustration). Could he have already been thinking of a ‘use in the concert’?

Title page in the autograph of the Coriolan overture, Bonn, Beethoven-Haus, BH 63. Illustration with kind permission.