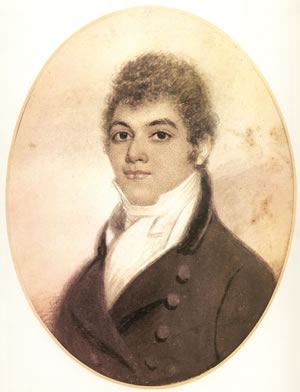 Last week I had the great pleasure of making the (virtual) acquaintance of Chi-chi Nwanoku, double bassist, teacher, founder of the Chineke Foundation and the Chineke! Junior Orchestra, advocate of multiculturalism. We talked about George Augustus Polgreen Bridgetower (1778–1860) and the so-called “Kreutzer” sonata op. 47, originally dedicated to the violinist Bridgetower who came from a mixed-race family. Then instead, the dedication went to the violinist Rodolphe Kreutzer (1766–1831), active in Paris. The special quality of this masterpiece probably called for a nickname, and so it became, without further ado, the “Kreutzer” sonata. Almost a century later, Tolstoy was ultimately to make this title permanent with his novella by the same name. In conversation with Chi-chi we philosophised about what would have happened in the music world if the dedication had after all gone to Bridgetower …

A general question came to mind in this connection. Do we really know why Beethoven rededicated this work? What do the sources say about this? Or, vice versa: How do we know, actually, that originally the sonata was to have been dedicated to Bridgetower? Well, the most important evidence is an extant fragmentary autograph of the sonata now preserved in the Bonn Beethoven-Haus. 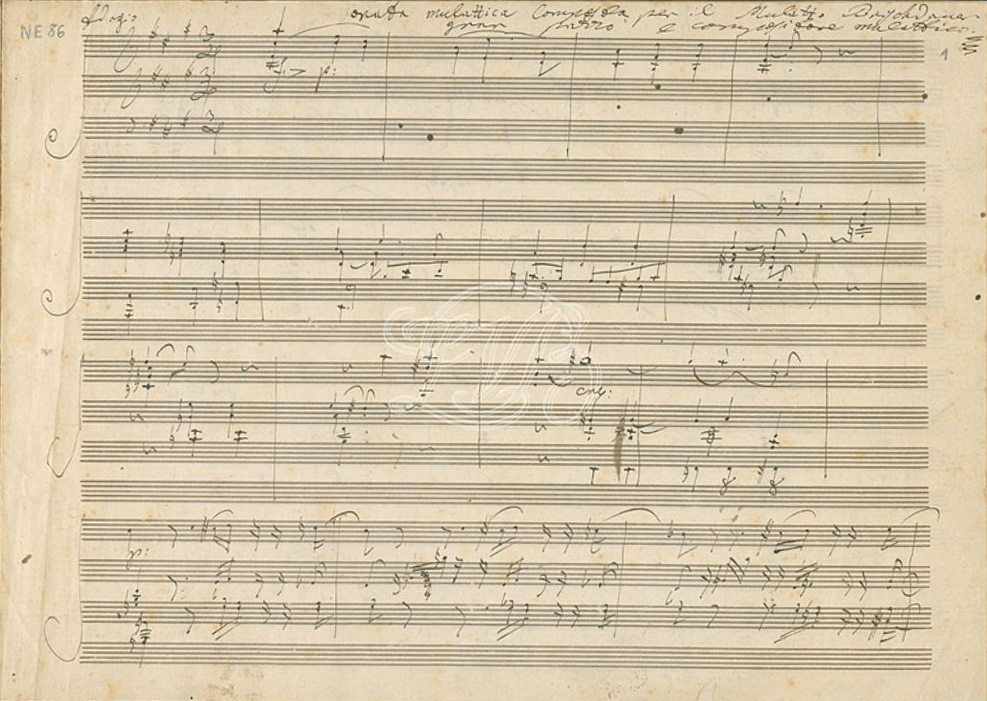 Autograph of the violin sonata op. 47. Illustration with kind permission from the Beethoven-Hauses Bonn.

Stated there at the top right in Beethoven’s hand is: “Sonata mulattica Composta per il Mulatto Brischdauer gran pazzo e compositore mulattico” (Mulatto sonata, composed for the mulatto Brischdauer, great madman and mulatto composer). From the threefold word repetition and the phrase “gran pazzo”, this dedication must clearly be classed as intending amicable teasing.

So far as we know today, Bridgetower came to Vienna in April 1803 as a traveling virtuoso and was introduced to Beethoven by Prince Lichnowsky during a visit. Bridgetower himself reported to J.W. Thirlwall, musician and poet friend, that he and Beethoven became “constant companions”, and in fact the composer also tried further to introduce the violinist into Viennese aristocratic society. Here’s what we know from a Beethoven letter of recommendation of 18 May that year addressed to Baron Alexander Wetzlar von Plankenstern, stating:

‘thus I have no hesitation in recommending to you this Herr Brischdower[,] a very skilful and absolutely powerful virtuoso on his instrument – besides his concerts he also plays excellently in quartets, I very much wish that you’d make him further acquainted, he has already made himself favourably known to Lobkowitz and Frieß and all other distinguished enthusiasts – I think it wouldn’t be bad at all if you took him one evening to Therese Schönfeld’s, where, to the best of my knowledge, some foreigners also go, or to your place – I know that you will thank me for this acquaintance’ (Beethoven Briefwechsel Gesamtausgabe [complete edition of Beethoven correspondence], letter no. 137).

From all that we know today, it was Bridgetower who induced Beethoven to compose the violin sonata, as testified by statements from contemporaries such as Ferdinand Ries and Carl Czerny. The sonata was probably written specifically for a concert organised by Bridgetower in the Vienna Augartensaal on 24 May 1803, where it was performed by the violinist with the composer at the piano. A report by Bridgetower gives us a bit of insight into the obviously very cordial rehearsals. After the violinist had taken some small virtuosic liberty in the first movement, Beethoven was ostensively enthusiastic: “He [Beethoven] jumped up, embraced me, saying: ‘Noch einmal, mein lieber Bursch [Once more, my dear fellow]!’” 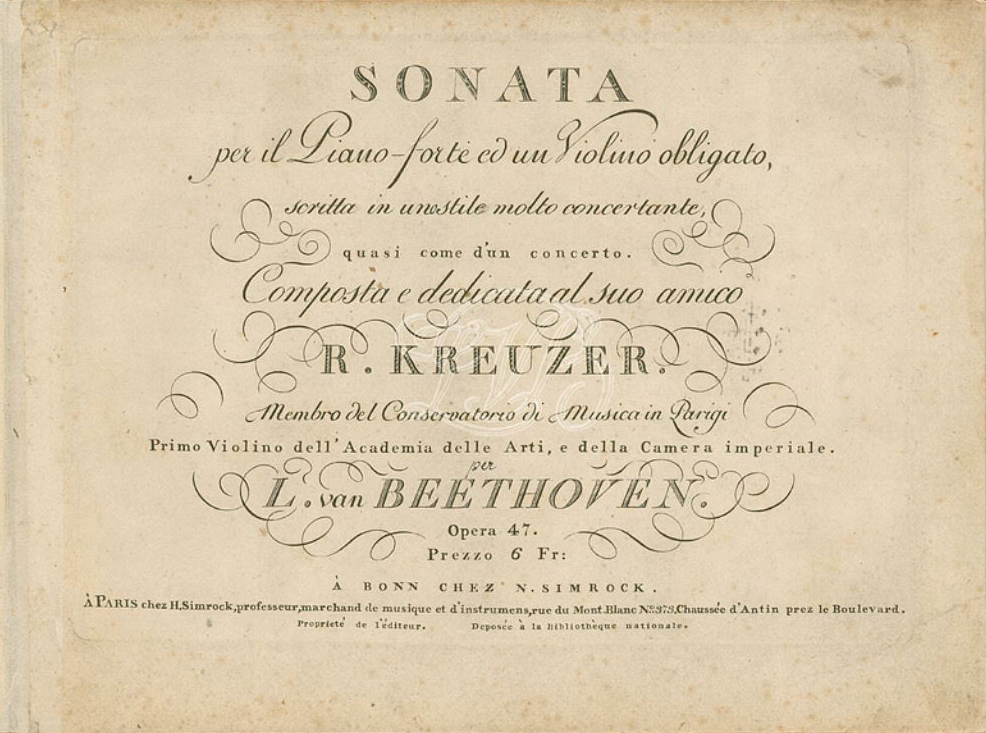 Original edition of the violin sonata op. 47 published by Simrock in Bonn. Illustration with kind permission from the Beethoven-Hauses Bonn.

But why then for the original edition of the sonata, when the friendship was evidently closer, didn’t Beethoven also use his dedication from the autograph? Here, posterity can only cite a single piece of circumstantial evidence, likewise provided by J. W. Thirlwall. According to him Bridgetower said: “on the first copy was a dedication to his friend Bridgetower, but, ere it was published, they had some silly quarrel about a girl, and in consequence Beethoven scratched out the name of Bridgetower and inserted that of Kreutzer”.

Can this story be believed? The great Beethoven biographer Alexander W. Thayer already added a question mark to this report, and I can only agree with his perception. Nothing has been scratched out on the above-mentioned autograph that is now once again accessible, and certainly Kreutzer’s name is not inserted (which, though, might have been the case on an autograph that is no longer extant).

This is now the point at which it’s time to ask about Beethoven’s motivation in proffering dedications and whether we can find another, plausible reason why opus 47 was ultimately given another dedication.

Yes, Beethoven occasionally made dedications to people very close to him. He was said (by Carl Czerny) to have been in love with his piano student Anna Luise Barbara, Countess von Keglevicz, whose name adorns the title page of the original edition of the piano sonata op. 7. Antonie Brentano, to whom a whole series of works should have been or were dedicated, is a candidate for the role of “Immortal Beloved”. Her daughter, Maximiliane Brentano, took pleasure in the dedication of the piano sonata op. 109. Beethoven wrote her: ‘A dedication!!! – well it’s not like those being misused galore – it is the spirit holding noble and better people together on this earth, and no time can destroy it, this it is that’s speaking to you now, and showing me you, actually still in your childhood years’ (Beethoven Briefe Gesamtausgabe, letter no. 1449). 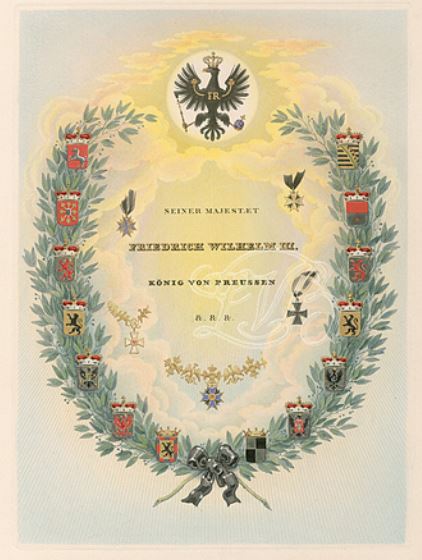 Picture of the 1st dedication page of the original deluxe edition “Der glorreiche Augenblick”. Illustration with kind permission from the Beethoven-Hauses Bonn.

‘not like those being being misused galore’, this phrase prompts a smile. For Beethoven himself was a great master of what he seems to be frowning on here: Using dedications as a source of money and influence! The list of his works’ dedicatees reads like the “Who’s Who” of European nobility in his time. At the Congress of Vienna, where, for example, the cantata “Der glorreiche Augenblick” was heard – its original deluxe edition bears no less than three dedications: “Seiner Majestät Friedrich Wilhelm III. König von Preussen [To His Majesty Frederick William III, King of Prussia]”, “Seiner Majestät Franz I. Kaiser von Österreich [To His Majesty Franz I, Emperor of Austria” and “Seiner Majestät Nicolaus I. Kaiser von Russland [To his Majesty Nicolaus I, Emperor of Russia]”. All this was, of course, in hopes of receiving money gifts that showed the dedicatees’ appreciation. Money gifts, please – no jewellery: In 1826 Beethoven immediately sold the ring given to him by Frederick  William III of Prussia for the 9th Symphony.

The end justified the means: When he could make such use of a dedication, Beethoven occasionally withdrew earlier promises. This is what happened in the case of the cello sonatas op. 5. They were composed in Berlin in 1796 for the cellist Jean Louis Duport and – as documented by a now-lost letter – had likely also been dedicated to him. The original edition appeared with a dedication to William II of Prussia.

So, in the Bridgetower case could there have also been a similar, weightier objective in withdrawing his dedication? (Or, did Beethoven always take these autograph dedications on manuscripts to be something very private, not binding on him in any particular way). Why could a dedication to Rodolphe Kreutzer be more useful to Beethoven? After all, the composer had met him in 1798, a full five years earlier, when Kreutzer was passing through Vienna. Meanwhile, Beethoven probably had no further contact with Kreutzer, now living far away in Paris where he was successful amongst the circle of musicians and aristocrats there. And here we may spot the cause. Sieghard Brandenburg surmises: ‘With his dedication to Kreutzer, Beethoven was probably hoping for a good entrée for his planned stay in Paris’ (Beethoven Briefe Gesamtausgabe, letter no. 193, fn. 5). For in fact, Beethoven was very dissatisfied with his situation in Vienna. Thus, in August 1803 Ferdinand Ries wrote Nicolaus Simrock in Bonn: ‘Beethoven will now stay here at most for still 1½ years. Then, he’ll go to Paris, which makes me extremely sorry.’ (Beethoven Briefe Gesamtausgabe, letter no.152) 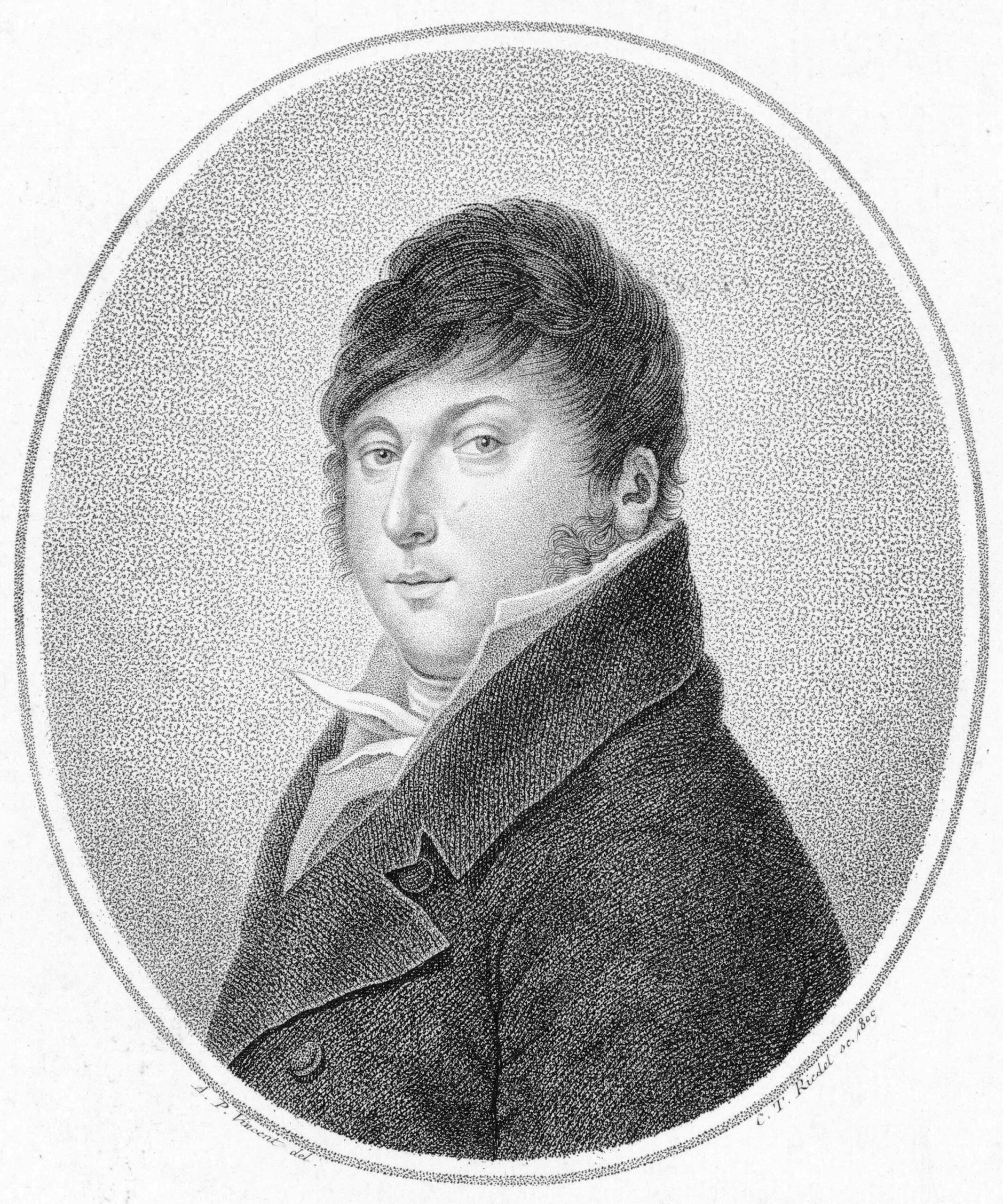 So, business interest had won out, although Beethoven knew how to defend this probably surprising dedication to his publisher Simrock: ‘this is a good, dear person who gave me very much pleasure during his stay here, I prefer his modesty and naturalness to all the exterior without interior of most virtuosi – since the sonata is written for a capable violinist, the dedication to him is all the more appropriate.’ Only business considerations? We can hardly avoid reading in this statement a stab in Bridgetower’s back, where perhaps there was after all a rift?

Be that as it may: Bridgetower asked Beethoven for this sonata, he performed it for the first time with him, and the composer, who obviously valued Bridetower at least at the time of its composition, originally dedicated it to him. So even if the nickname “Kreutzer” sonata can hardly be eradicated, we might wish that in the future the name Bridgetower would occupy a more prominent place in the reception of the work.