In the run-up to the Beethoven anniversary year, I kept getting enquiries from musicians looking for unknown Beethoven compositions, that is, rejected or fragmentary works to record or programme in concerts. Understandably so, for in 2020 they would want to explore the appeal of the “unknown Beethoven” in addition to the well-known core repertoire. The new Beethoven works’ catalogue has been an indispensable aid in answering such questions – which were often also about scoring and authenticity. Whereas the first volume of the catalogue is devoted to works with opus numbers, the second contains information on all compositions not assigned an opus number either during Beethoven’s lifetime or posthumously. This second volume is divided into works without opus numbers (WoO), unfinished works (Unv) and an appendix (Anh) with spurious or dubious works. Separate sections are furthermore devoted to Beethoven’s numerous plans for operas and oratorios.

In fact, it is by no means true that remaining in the shadow of opus-number music have been all compositions not intended by Beethoven for publication or assigned a work number. We think, for example, of the famous Bagatelle in A minor WoO 59, first published 40 years after Beethoven’s death under the title “Für Elise”, which has become today one of the most popular of all his works. But as a whole, this second catalogue volume records in both main sections for “WoOs” and “Unvs”, a wealth of largely unknown works, finished or unfinished. Beethoven was one of those composers who dealt quite carelessly with their manuscripts – especially with full-score autographs as soon as the work in question was published – though, conversely, he usually did not destroy sketches or drafts even after they had served their immediate purpose. Considering the great length time that has elapsed since Beethoven’s lifetime, the number of extant sketches and manuscripts is astonishingly high.

In the following I’d like to make a little foray into the very special world of “unfinished” works. The extent of completion, or better yet, “non-completion”, varies greatly. Listed are compositions not going beyond a few sketches, right up to those for which almost complete sonata movements are extant. But upon examination surprises are always turning up.

So, it’s probably known that Beethoven made two other attempts at symphonies beyond the nine completed, usually designated as No. 0 in C major (Unv 2, sketched as of 1794) and as No. 10 in c minor or E-flat major (Unv 3, initially sketched in 1822 together with the later 9th symphony). Far less known, although already described in 1911, is another attempt in this genre, recorded in Bonn around 1788/90 on page 70 in the so-called “Kafka” sketchbook with at least 111 measures of a movement in c minor (Unv 1), headed “Sinfonia”.

Even more interesting appear to be the fragments in the realm of concerto music. Examples include an aborted attempt at a violin concerto in C major (WoO 5, full score of 259 measures, ca. 1790/92) as well as an incomplete piano concerto in D major (Unv 6, sketches, together with a full score of 256 measures). Were there any other attempts at concertos for other solo instruments? We may assume so, though as of now there is no evidence of anything like a cello or bassoon concerto. Exceptionally, there is the concerto for oboe in F major from the late Bonn period (WoO 206, ca. 1792). Extant is only a sketch for the 2nd movement plus a folio described by Anton Diabelli as containing the incipits of all three movements, though several documents indicate that at the time it was not only concluded but also performed – strictly speaking, it therefore doesn’t belong at all in our list, because what is fragmentary here does not refer to what once existed, but to what has survived. Not only oboists will regret that Beethoven did not revise it again later and have it printed. 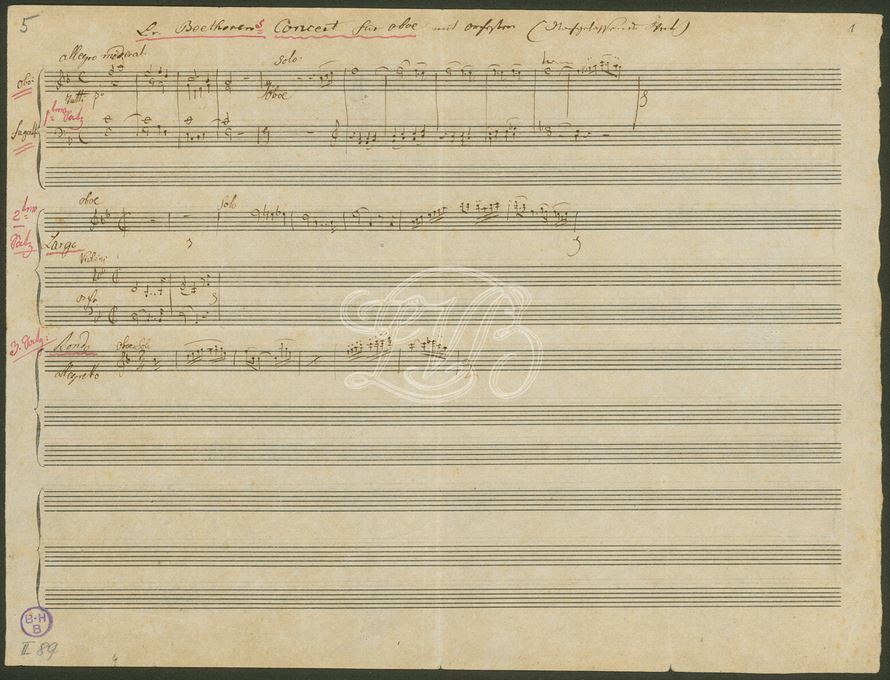 Directly adjacent to the oboe concerto in the works’ catalogue is a work appearing curious at first glance, a “Romance cantabile” for flute, bassoon, piano and orchestra in e minor (WoO 207), which nevertheless breaks off after 57 measures. That it was a fragment of a slow movement belonging to a “sinfonia concertante” has reasonably been suggested. The tradition of such concertante symphonies was still very much alive at the end of the 18th century and the transition to concertos with several solo instruments was relatively seamless. If completed, could WoO 207 have become a counterpart to the famous Triple Concerto op. 56?

Both external and internal musical reasons can be given for aborting works already started. The non-musical reasons often concern changes unforeseen by Beethoven in the circumstances of or conditions for the planned composition. In March 1814, for example, he wanted to have a cantata based on the text Europens Befreiungsstunde [Europe’s hour of liberation] from a text by Joseph Karl Bernard (Unv 17) performed in an academy of his own works. In view of the text’s undisguised hostility to the French, the censors forbad such a performance on the eve of the Congress of Vienna, so that the music setting remained unfinished.

As is well known, Beethoven was often unfortunate in the libretti for his opera projects. He gave up further work on the first scene of the opera Vestas Feuer based on a book by Emanuel Schikaneder (Unv 15, 1803), rejecting the libretto as too poor and unsuitable. Extant sketches show that in 1808 he talked of setting to music a libretto by Heinrich Joseph von Collin, for whose drama Coriolan he had previously composed his famous overture op. 62. Collin was to have furnished him with the Macbeth subject based on Shakespeare’s tragedy. The project was postponed soon after, however, and resumed only in 1811, though it later emerged that Collin had left the libretto unfinished when he died suddenly in the summer of 1811. Since the subject, as his brother Matthäus later reported, “threatened to become too gloomy”, Collin had broken it off long before his death.

It is obvious that self-critical considerations – both with regard to the quality of what was notated as well as also its continuation – are responsible for aborting some of the sketches, drafts or full scores. Beethoven’s peculiarity of jotting down ideas often without formative procedures, as a quarry, so to speak, for future motif building blocks, was naturally conducive to the risk of getting stuck and giving up completely. The sketch material for the later 8th symphony in F major op. 93 initially shows thoughts on a piano concerto as well as ideas for a planned further symphony in d minor, which were quickly abandoned. In many cases, however, external as well as internal reasons are likely to have ensured that Beethoven lost his motivation to finish what he had already set down. 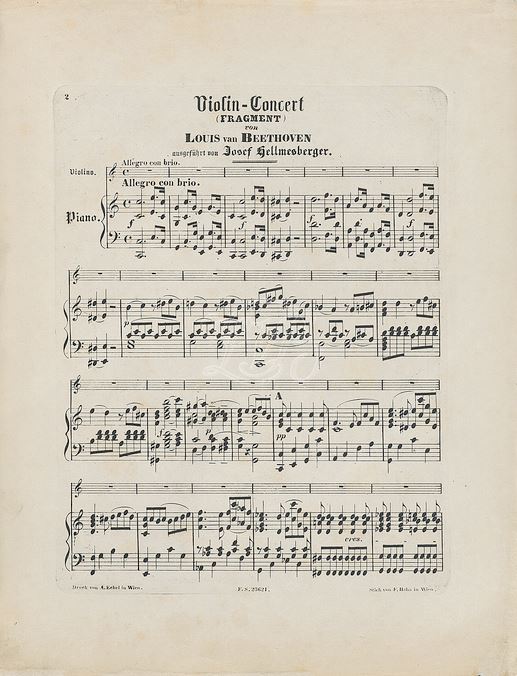 The second question can hardly be unequivocally answered. As understandable as the interest of researchers and musicians may be in completing such fragments for the music industry, it is just as difficult to evaluate such attempts. Is it legitimate to continue aborted sections? Ultimately, we all have to answer this question for ourselves. In the second volume of the works’ catalogue, all attempts known up to 2014 are listed under the respective numbers. The spectrum ranges from reconstructions based only on sketches (symphony No. 10, Unv) to the continuation of comparatively extensive sections (first movement of the violin concerto in C major WoO 5). In some cases, owing to lack of material, only the publication of the fragments remains without any completion (as for the string quintet movement Unv 7); in others, at least one formal section is completely executed so that the material that follows can be supplemented (as for the violin and cello duo Unv 8, completed by Robert Levin).

Best of all, dear reader, is for you to form your own view of these “unfinished” works using the works’ catalogue – that’s bound to be worthwhile!