Posted on November 23, 2020 by Annette Oppermann

In Beethoven’s just as extensive as impressive chamber music oeuvre, four pieces have for decades been vainly awaiting company in the Henle catalogue under the heading Mandolin and Piano. They occupy a special position in several respects, based, first of all, on their slightly exotic scoring, then, furthermore, in conjunction with the Prague Countess Josephine von Clary-Aldringen, one of the not so few women in Beethoven’s life with whom he was possibly associated, and not merely artistically. At the same time, these pieces, comprising just 16 score pages altogether, also combine a surprising number of interesting questions about matters of their history and editing that make taking a closer look at this fringe repertoire definitely worthwhile. 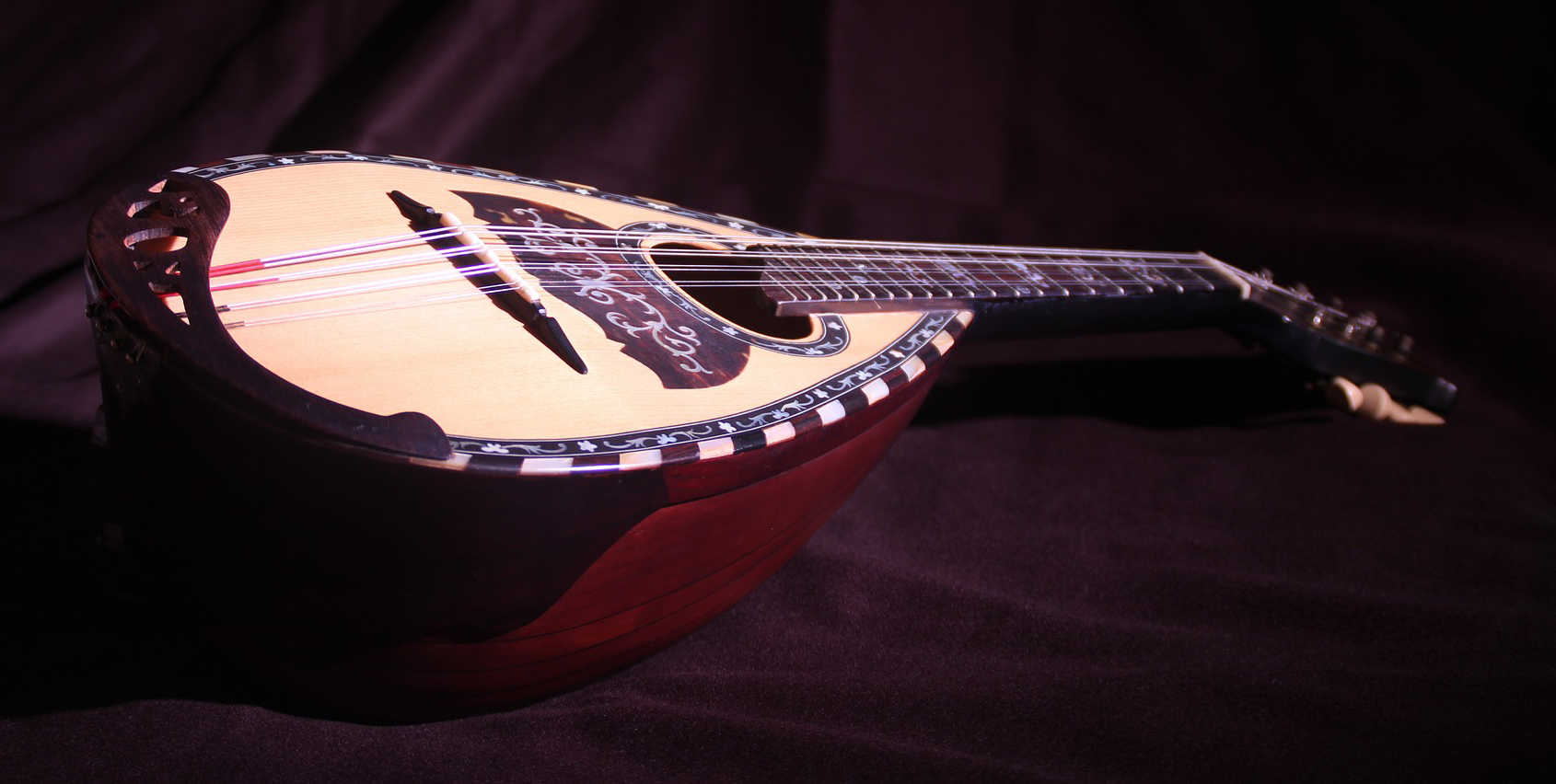 The mandolin first had its heyday in 18th-century Italy where it particularly shone not only in small string ensembles, but was also deliberately featured in solo concertos by such composers as Antonio Vivaldi or Johann Adolf Hasse. Towards the end of the 18th century Italian virtuosos even popularised the silvery, delicate sound of the Neapolitan mandolin tuned in fifths, north of the Alps, in Paris, Vienna and Prague. And since playing mandolin also provided women with a decent playing position, success was guaranteed in two respects:  Either she herself played the instrument at home (a visual subject that evolved in the 19th century into almost a classic) or she was seduced by its delicate sounds – as in Mozart’s Don Giovanni, where with just that instrument the love-crazed protagonist accompanies his nocturnal serenade beneath his sweetheart’s window. 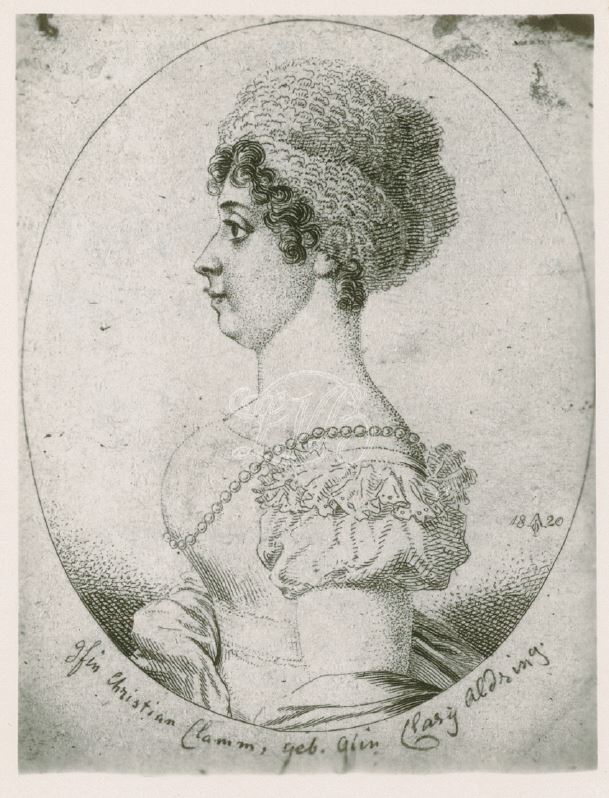 When, incidentally, his Don Giovanni was given its 1787 première in Prague, Mozart was able to rely on the special qualities of the Prague opera director and composer Johann Baptist Kucharz (1751–1829) – also a gifted mandolinist who, by the way, gave mandolin lessons to Josephine von Clary-Aldringen. That the countess was a good singer “full of grace”, could already be learned from Schönfeld’s 1796 Jahrbuch der Tonkunst für Wien und Prag (Yearbook of Music for Vienna and Prague). Her familiarity with the mandolin is, though, revealed by her music library that housed a substantial proportion of the relevant literature when the musicologist Arthur Chitz sifted through it at the start of the 20th century.

Beethoven became acquainted with the countess in Prague, the aspiring composer’s first stop on a long concert tour at the beginning of 1796. With his dramatic scene “Ah! perfido” he created an effective concert number for the respectable singer, documented by his note on a copy of Opus 65 that he had checked: “Recitativo e Aria composta e dedicata alla Signora Comtessa di Clari Da L v. Beethoven”. But he obviously did not give her this copy, since it was still located in his possession at the time of his death. A performance of the concert aria by the countess is not on record, and the first edition of Opus 65 was to appear in 1805 without any reference to her. 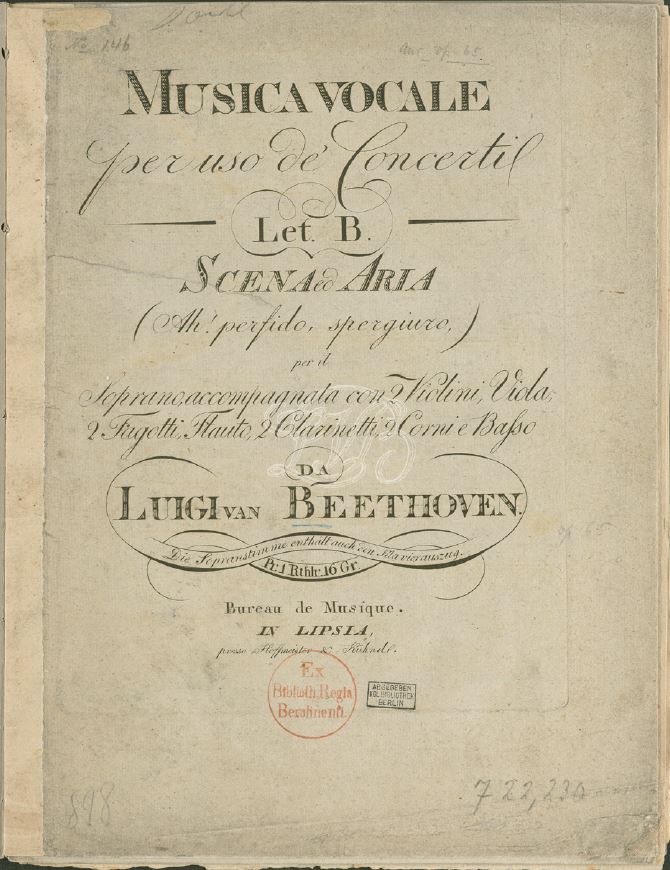 A greater contrast is hard to imagine than that between the concert aria “Ah! perfido” and the four small mandolin pieces. Here, the great concert aria full of drama, there, the intimate domestic music for mandolin and keyboard instrument – how does that go together? It can be described as two sides of the same coin:  For one thing, Beethoven was creating a work with an attractive public profile to be performed by a respectable singer from a noble house – this would have been good publicity for the aspiring composer.  For the other, with the two brief sonatinas, a lyrical adagio and the diverse variations, he dedicated to her a selection of pieces for making music together in a private setting, facilitating a more lasting personal contact during his several weeks’ stay in Prague. 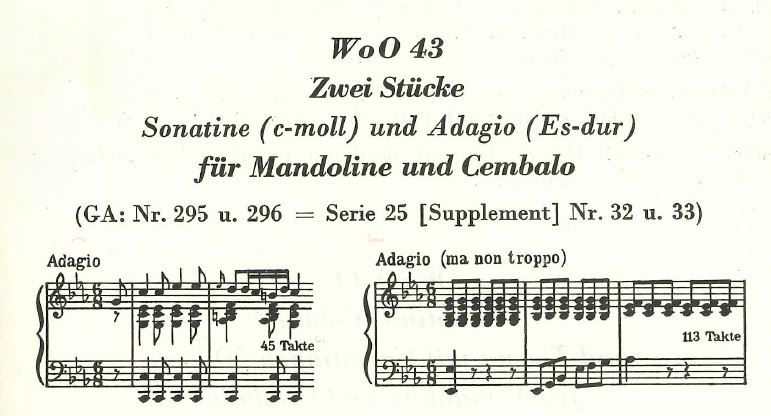 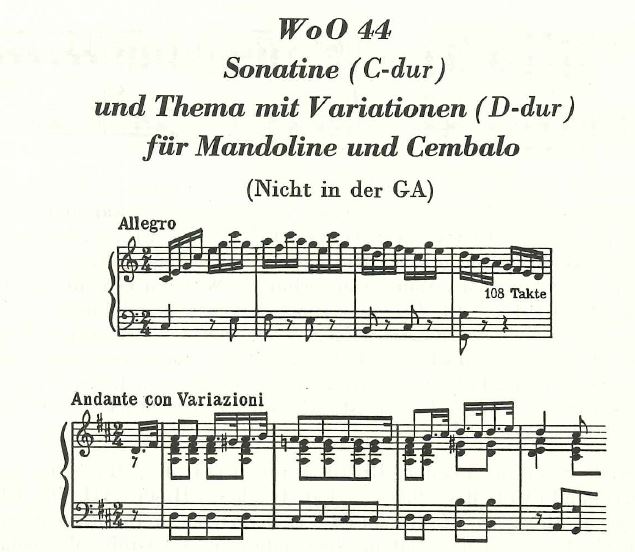 The paired grouping of these four pieces as WoO 43a/b (Sonatina and Adagio) and WoO 44 a/b (Sonatina and Andante con Variazioni) in the old Kinsky/Halm Beethoven works’ catalogue was based on the then state of knowledge pertinent to the Beethoven manuscript history: Both pieces listed as WoO 44 were clearly and exclusively associated with Josephine von Clary, owing to the finds by Arthur Chitz in the countess’s library. Preserved in Berlin for the Adagio WoO 43b, on the other hand, was an earlier autograph, and the autograph for the Sonatina WoO 43a extant in London shows no dedication to the countess. It was therefore initially assumed that these two pieces had already been composed in Vienna, possibly for the violinist and mandolinist Wenzel Krumpholz, a good friend of Beethoven’s. Both the extant autographs for WoO 43b were viewed by Willy Hess as different versions, which he even presented synoptically in his supplements to the Complete Edition.

Only in the second half of the 20th century did a closer examination of the autographs reveal a different picture: in the 1970s Douglas Johnson discovered that the Sonatina WoO 43a was written on paper that Beethoven had with him on the Prague trip. The supposed second version of WoO 43b, which Arthur Chitz found in the countess’s library, is notated on the same paper. In addition, according to Chitz, the Sonatina WoO 43a was also included in a more extensive (unfortunately, now lost) copy of mandolin pieces from the countess’s library. So, there was no longer any reason to associate the two WoO 43 pieces with Wenzel Krumpholz, rather, tangible evidence that these were also composed in 1796 in Prague for the countess.

In his edition of the mandolin pieces for the new Beethoven Complete Edition, the editor Armin Raab made it clear in the 1990s that the two autographs of WoO 43b do not document two complete, different versions, but rather several work stages. The Berlin autograph, initially begun as a fair copy, Beethoven revised so much that music could no longer be played from it, and it did not yet contain any dynamics and articulation markings. These Beethoven notated only upon rewriting the work, for which he then also supplied a title and the dedication “pour la belle J par LB”. 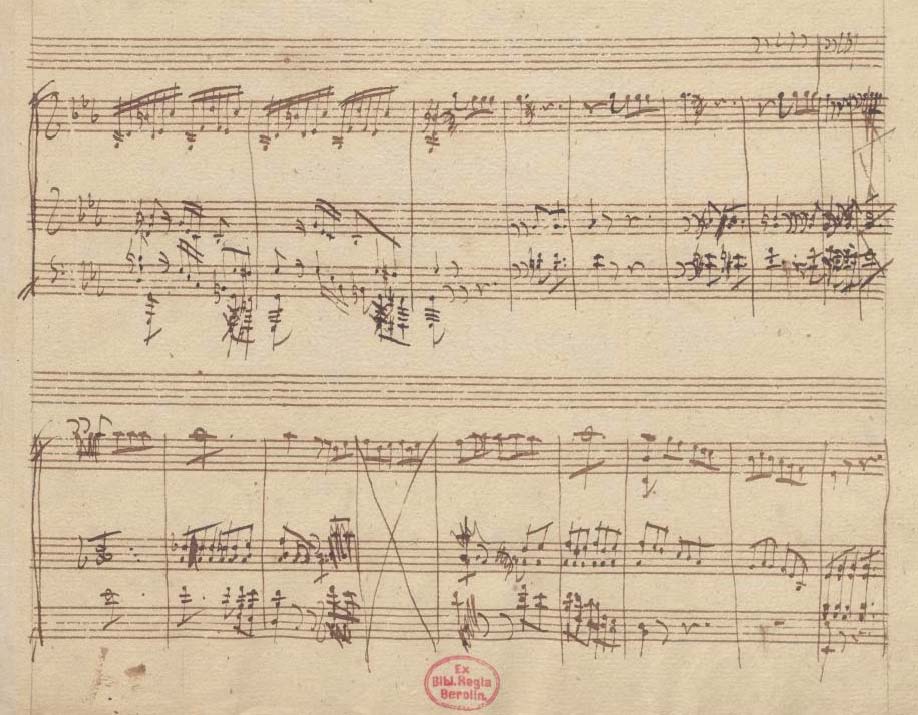 Excerpt from the Berlin autograph of WoO 43b  (mm. 56-71) Staatsbibliothek Berlin

The autograph of the Variations WoO 44b also shows significant revisions: the theme was initially conceived as opening with a full measure rather than with an upbeat. It was not until the last variation that Beethoven decided on the upbeat version and then corrected the entire manuscript accordingly. The complete lack of articulation and dynamic markings also suggests that the variations had not yet been finalised in this form. Although the autograph already includes a title, there is no explicit dedication – if we disregard a cryptic abbreviation that has not yet been solved, transcribed in the complete edition as “f. d. L. h. n. [or e?] J.”. Whether this conceals a dedication “für die Liebe [for the dear]…Josephine”? Who knows?

But what we can recognise from the autograph history of the four pieces is Beethoven’s meticulous work on these small contributions to the countess’s domestic music. Even the autograph of the 45-measure Sonatina WoO 43a shows several layers of revision. So, it was obviously important to Beethoven to deliver a good job here. Whether the pieces can be read as veritable love letters from Beethoven to the countess, as was recently posited on the occasion of a new recording of the Adagio, remains to be seen. But good and possibly heartfelt music actually indeed also suffices. Take a look at our edition – or listen to this wonderful recording of the Adagio accompanied by a historical Hammerklavier  (Youtube).

This entry was posted in Beethoven, Ludwig van, Instrumentation and tagged Beethoven, mandolin. Bookmark the permalink.

One Response to »Beethoven love letters? A contribution to perhaps his oeuvre’s smallest work group«