Posted on December 7, 2020 by Dominik Rahmer 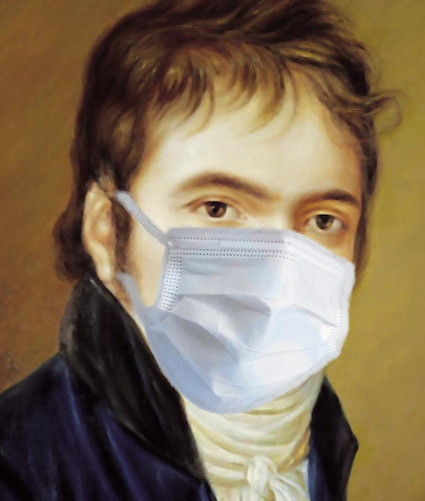 Beethoven Year 2020 is coming to an end, and there is no doubt about it: We had certainly imagined it as otherwise…. The COVID-19 pandemic has nixed most of the worldwide celebrations, concerts, congresses and other events devoted to Beethoven. The motto “Seid umschlungen, Millionen” [Be embraced, millions] is disallowed owing to social-distancing, and kissing the entire world is not to be shared at the moment, either.

The relationships must, of course, be clarified: Beethoven and his music will survive this virus year without any problem – though, tragically, not some millions of people who did get sick. For most of us COVID brings severe personal and economic restrictions; the new international term “home office” has taken over, together with such 2020 concepts as “lockdown”, “mandatory masks”, “hand-washing” and “aerosol”.

In this, our final Beethoven blogpost of the year, also written in the safety of the home office, the topic is not to be about his music, but about the composer himself personally and where this music was created: What did Beethoven’s “home office” actually look like? After leaving the Bonn court orchestra and moving to Vienna, he no longer had a permanent employment, but had to earn his living as a freelance artist by performing concerts, giving lessons and selling his compositions to music publishers. During his time in Vienna, his works were composed either in his domestic quarters, that is, at his writing table and partly tried out on his piano, or created on his long walks through the Viennese countryside. He loved being alone in Nature’s great outdoors and brought home in his notebooks countless new ideas where he worked them out and wrote them in “fair copy” (comparatively speaking). 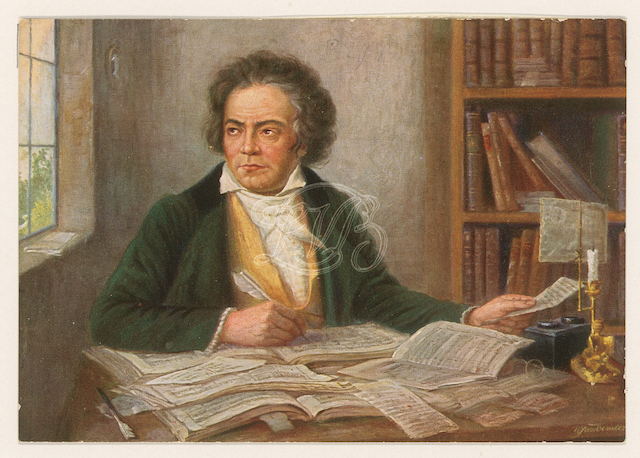 His contemporaries’ numerous reports mentioning his messy, constantly changing dwelling places (Beethoven lived in at least 29 apartments in Vienna, not counting his summer stays outside the city), his chaotic bachelor life and his appearance in the streets are legendary and give a fascinating impression of his living and working.

Below, I have assembled a small selection of these eyewitness reports for you, taken from the two-volume anthology published by G. Henle Verlag, Beethoven aus der Sicht seiner Zeitgenossen [Beethoven From the Perspective of his Contemporaries], providing on the nearly 1200 pages fascinating reception evidence in the form of articles, memoirs, anecdotes, letters, diary entries, interviews, etc. 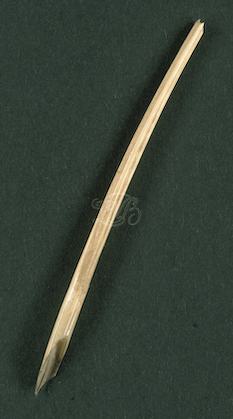 ‘I think his apartment consisted of only two rooms. In the first there was a closed alcove where his bed stood, but small and dark, so that he got dressed in the second room or sitting room. Imagine the greatest possible filth and clutter that there could ever be: puddles of water on the floor, a rather old grand piano with a thick layer of dust as well as manuscript and printed pieces of music. Underneath (I’m not exaggerating) was a not emptied chamber pot. Beside the piano, a small walnut table, accustomed to often having its writing set knocked over, all sorts of pens encrusted with ink, alongside which those proverbial tavern pens would have been excellent, and still more music. The seats, almost all wicker armchairs, were covered with plates holding the remains of the previous day’s supper, together with pieces of clothing, etc.’

Bettina Brentano, writer and novelist, 1810:
‘His apartment is truly astonishing, in the first room, two or three grand pianos all resting on the floor without legs, trunks holding things, a chair with three legs; in the second room, his bed, made up winter and summer of a straw mattress and thinner cover, a washbasin on a pine table, the night clothes lying on the floor…’

‘When he came to Wienerneustadt on his artistic walks, his striking appearance, since he was always looking up and writing his music in the pocket notebook, made people think he was a spy; for it was in wartime and the city was embattled. He was therefore compelled to come to the town hall and was released only when a music-loving councillor or someone similar recognised him as Beethoven.’

Wenzel Johann Tomaschek, composer, 1814:
‘The reception room where he warmly greeted me, was anything but brilliantly furnished, and there was just as much disorder there as in his hair. Here I found an upright pianoforte, and on its desk the text for a cantata (Der glorreiche Augenblick) by Weißenbach; on the keyboard lay a pencil for sketching his work; beside it, on a music sheet just described, I found the most diverse ideas jotted down without any context, the most heterogeneous details juxtaposed as they might have just occurred to him. These were the materials for the new cantata. His conversation was also just as thrown together as these musical particles…’ 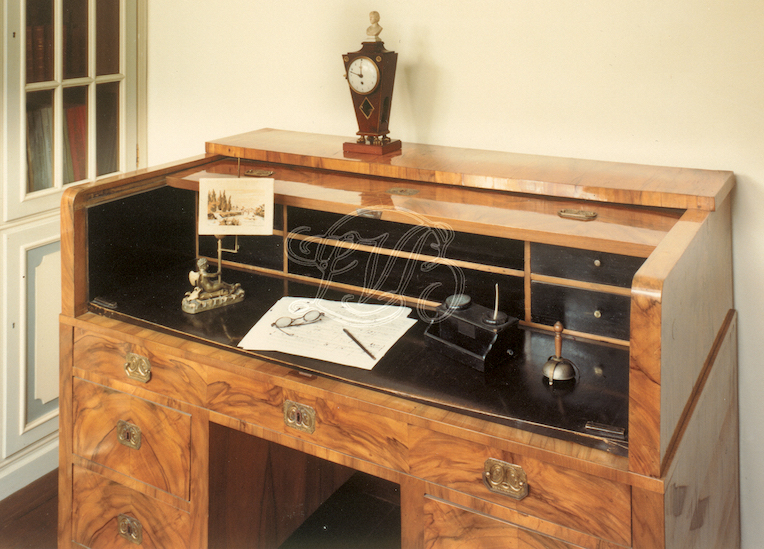 Joseph Rudolph Lewy, horn virtuoso:
‘It was in 1822 that I met Beethoven one day in the Kärntnerthorstraße. He was standing composing, completely self-absorbed, in the midst of the greatest crowd of people. For a long time I watched as he busily wrote on music paper pressed up against the gate of an inn.’

Giacchino Rossini, composer, 1822:
‘As I climbed the stairs leading to the squalid apartment in which the great man lived, I had some trouble controlling my emotions. When the door opened I found myself in some kind of dark hole, as filthy as it was in a terrible mess. I recall above all that the ceiling, situated directly under the roof, showed wide cracks through which rain could pour in.’

Samson Moses de Boer, cellist, 1825:
‘After talking a little while about art, this great man showed me a thin pocket notebook, ruled for writing music, and filled with small pencilled notes. “See, my walk-taking,” he told me.’ 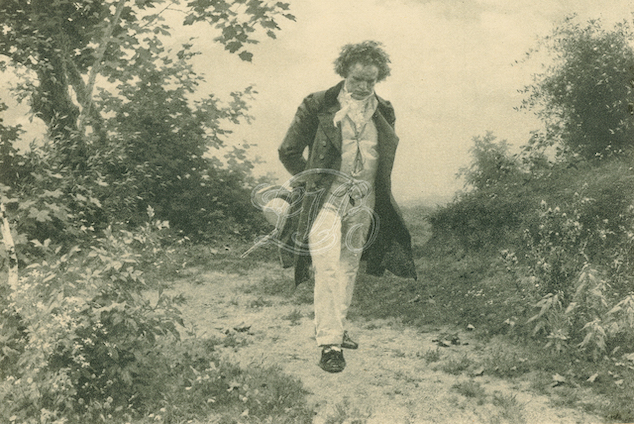 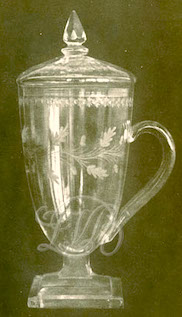 ‘…I was announced, gave my letter from Zelter as an admittance card and stood waiting in the foyer. I could still paint it in its desolate half emptiness, half disorder. There were a number of empty bottles on the floor; on a plain table, a few plates, two glasses, one half full. […] Beethoven invited me to sit down: he himself took up a chair in front of the bed and moved it to a table which, two steps away, was entirely covered with treasures, with music from Beethoven’s hand, the work that just now occupied him. I took a chair next to his. Quickly, I looked across the room. It is as big as the foyer and has two windows. There is a grand piano under these. Otherwise, nothing is to be discovered there that betrays any kind of cosiness, comfort, is at all glamorous or luxurious. A writing table, some chairs and tables, white walls with dusty old wallpaper – that is Beethoven’s chamber.’

Ignaz Jeitteles, writer and jurist, 1826:
‘We pulled the bell to the apartment door. Nobody opens it. We try the handle, the door is open, the foyer empty! We knock at the door of Beethoven’s room and since nobody calls out “come in” we knock again, harder finally. In vain! And yet we could hear that someone was in the room. We step in. Curious surprise! Standing at the wall opposite, to which were stuck colossal sheets of paper, rastral-lined in charcoal, with his back turned to us, was Beethoven – but how? Clothes may have become too uncomfortable for him on the excessively hot summer day, so he had taken them off and, wearing only a short shirt, was sketching notes on the wall, sometimes in red pencil. Then he paced back and forth, probably also beating time, and struck a few keys on his stringless piano. Not once did he happen to turn to the door.’ 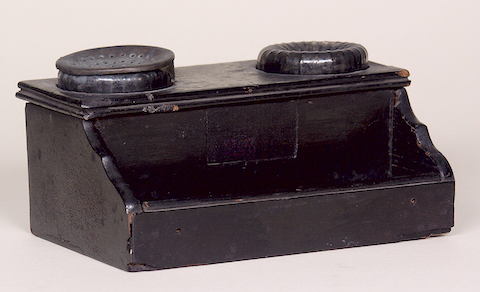 Ignaz von Seyfried, conductor and friend of Beethoven’s, memoirs, 1832:
‘…although in his household, incidentally, a truly admirable confusion dominated. Books and music strewn in every corner, – there the remnants of a cold snack, – here sealed or half-emptied bottles, – there on the high desk the hasty sketch of a new quartet, – here the ruins of a lunch, – there at the piano, on scribbled sheets, the material for a wonderful symphony still slumbering as an embryo, – here a galley proof awaiting redemption, – personal and business letters covering the floor, – between the windows a respectable loaf of stracchino, ad latus considerable debris of a real Veronese salami….’ 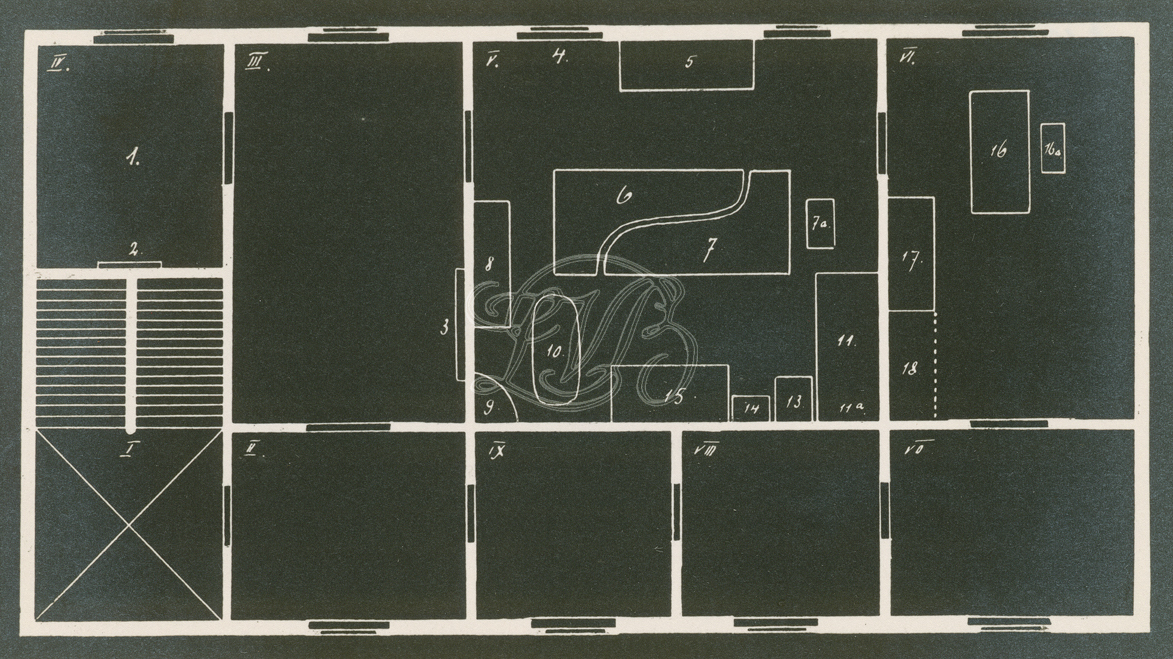 Floor plan of Beethoven’s final apartment in the so-called “Schwarzspanierhaus” in Vienna
With kind permission of Beethoven Haus Bonn.