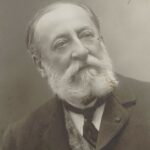 Whereas in 2020 the music world’s focus was on Beethoven’s 250th birthday, we can salute another anniversary celebrant at the start of this new year: Camille Saint-Saëns (1835–1921), although as with that of his precursor, his actual anniversary date falls only in December. ‘But just a moment now,’ you, dear blog reader, will say: ‘Beethoven and Saint-Saëns – they’re not to be compared with each other!’ No, of course not, in terms of the substance of their works and its importance for posterity, Beethoven is, so to speak, in a different league than the Frenchman. It’s certainly undeniable, though, that Saint-Saëns is still one of the most underrated of composers. So, high time to turn the spotlight on him, illuminating a bit more closely his personality as well as his work.

Born in Paris on 9 October 1835, Camille Saint-Saëns grew up as an only child in the care of his mother Clémence and his great-aunt Charlotte Masson, since his father, an official in the Ministry of the Interior, had died within a few months of his son’s birth. The boy’s extraordinary gifts as a polymath, encompassing music and art, together with natural sciences, mathematics and foreign languages, had already become apparent early on. He precociously learned to read, was already translating texts from Latin and Greek at age seven, as well as also solving algebra and physics assignments with just as little effort. 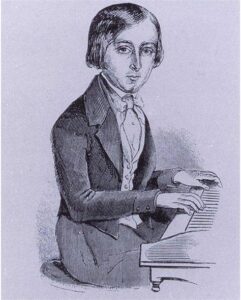 The ten-year-old at his concert debut, drawing by Mme Paulin, appearing in L’Illustration, May 1846

His great-aunt, a trained pianist, gave piano lessons to the young child who was already composing his first pieces in 1839. Everything went smoothly without coercion or drill, curiosity, talent and diligence alone producing amazing results so that he was even able to sight-read demanding scores and acquire unknown music within a brief time, thanks to his phenomenal memory. The drawback to this sheltered childhood and youth was his extensive lack of social contact with his peer group, which led to a lifelong reserve, even outright distance in dealing with friends. He was hailed as the “new Mozart” following his first public appearance as a pianist in May 1846 in the Paris Salle Pleyel, where he played, amongst other works, Mozart’s piano concerto in B-flat major, K. 450, and Beethoven’s piano concerto no. 3 in c minor, op. 37.

Just two years later he entered the famous Paris Conservatoire to work obsessively on his further training as pianist, organist and composer. A long life of numerous ups and downs followed, including a marriage that failed after only a few years. Though well-recognised in his career as an organist until 1877, he long remained controversial as a composer. When he died on 16 December 1921 in Algiers, he had composed more than 300 works in almost all genres, only about two dozen of which are currently firmly established in the concert or academic repertoire. About half of his oeuvre consists of such almost completely forgotten vocal works as choruses, cantatas and songs with piano accompaniment. Still performed of the oratorios is only the Oratorio de Noël, op. 12 (1858), of the stage works, at most occasionally Samson et Dalila (1877), although Saint-Saëns was very ambitiously convinced that just here he had done his best in his altogether 14 operas. 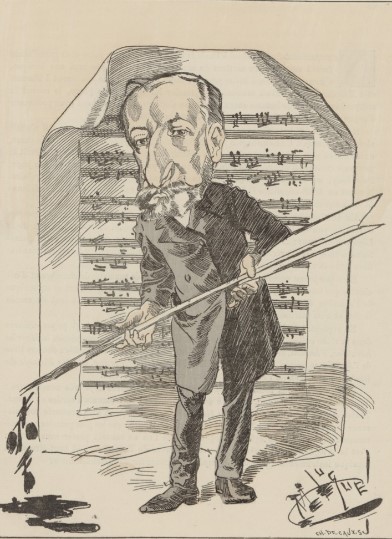 We are focussing from today’s perspective on his instrumental music, showing most clearly his classicism in the sense of his striving for a modernisation based on the classical composers – both such French composers as Couperin and Rameau as well as also German-Austrian composers from Bach to Beethoven. Paradoxically, his style is characteristically heterogeneous, an extremely broad palette, borrowed from music past or contemporary, domestic and foreign. It was no coincidence that he described himself as an eclectic. Composing was consequently more of a craft than a brilliant idea, more a matter of diligence than waiting for inspiration. This outlook, coupled with a noteworthy independence from popular taste, resulted in an eventful reception during his long life. Initially decried as a revolutionary in France owing to his focus on symphonic music, concertos and chamber music, enthusiasm abroad led after some time to recognition in his homeland, culminating in admiration around 1890 as one of the classical composers of French music. This changed post 1900, however, as his music was increasingly sidelined in the face of the avant-garde of a Debussy, Ravel or Stravinsky. On closer inspection, the bon mot still popular with biographers – ‘started as a revolutionary, ended as a reactionary’ – does not hold up: he was neither the one nor the other, but actively participated in the music scene, yet without any dogmatism. He was one of the cofounders of the “Société nationale de musique”, offering from 1871 a forum for new works by French composers under the motto “ars gallica”. And he was one of the first composers in France to write symphonic poems or film music, though conversely refusing the “wagnérisme” cult. His independence is also documented by his numerous articles and essays, in which he repeatedly spoke out in favour of underrated works and composers or against exaggerated fashions and admiration. 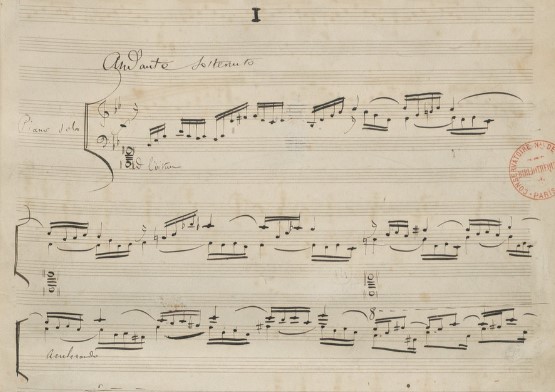 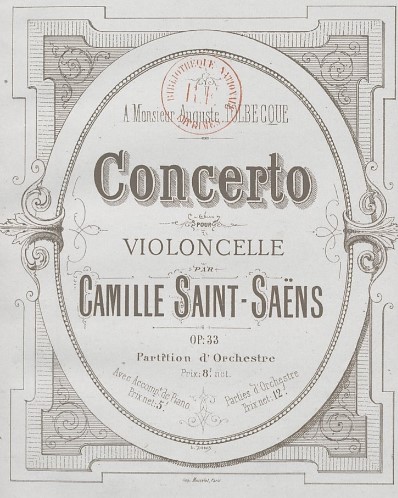 Having said all this, no revolutionary innovations are to be expected from Saint-Saëns’s music, though despite its stylistic borrowings and perfect craftsmanship, it is never slick or academic. From that it keeps alive Saint-Saëns’s passion for formal experiments and his pleasure in making music that can be felt everywhere, together with his fine grasp of harmonic and tonal refinement. Upon first hearing the Introduction et Rondo capriccioso you will hardly forget its rondo theme, just as is the case with the distinctive accented notes in the main theme opening the 3rd violin concerto or the exotic “Nile song” in the Andante of the 5th (“Egyptian”) piano concerto or…or…. But please discover for yourself the numerous pearls in Saint-Saëns’s music.

This entry was posted in Monday Postings, Saint-Saëns, Camille and tagged Saint-Saëns. Bookmark the permalink.