Posted on February 2, 2021 by Wolf-Dieter Seiffert

When for the third and last time at the end of October 1772 the Mozart father and son came through the South Tyrolean city of Bozen [Bolzano] on their way to their Milan destination, Wolfgang was hungry and in a foul mood. How else to explain his coarse rhyme about this beautiful city: ‘Bozen this pigsty. || A poem by someone who was foxily-devilishly wild and enraged by Bozen.[:] If I should come to Bozen again, I’d rather beat myself in the private parts.’

Out of boredom, Wolfgang Amadeus Mozart allegedly composed a string quartet that day in Bozen: ‘Wolfg: is also well; to while away the time he is just writing a quatro [quartet].’ So states Leopold Mozart’s letter of 28 October 1772 to his wife, to which his ‘foxily-devilishly wild’ son added the crudely humorous comment.

Two tenacious assertions within this context are to be refuted in the following: neither is there certainty that this “quatro” is identical with the string quartet in D major, K. 155, nor that there is by Mozart any real “Bozen string quartet” at all.

Over and over again we read that Mozart’s D-major quartet, K. 155, was the “quatro” mentioned by Leopold Mozart that was composed ‘out of boredom’. I guess we have to blame here the entry in the – to date, incorrect – Köchel catalogue (© 1964, p. 159), chronologically separating the quartet from the other works in the series and therefore listing it under K. 134a (155). Alfred Einstein’s subsequent comment to this statement about Leopold’s letter passage is: ‘Undoubtedly [!] this is 134a (155).’ But Wolfgang Plath already warned about possibly jumping to conclusions in his preface to the pertinent edition within the “New Mozart Edition” (NMA, VIII/20, section 1/1, String Quartets © 1966): ‘Each quartet begins with a new paper fascicle: meaning that there is nothing to suggest that the genesis of the individual fascicles must have been configured as at present – on the contrary’ (NMA Preface, p. X).

The error in the precipitate attribution is based on the autograph title of K. 155 (134a): 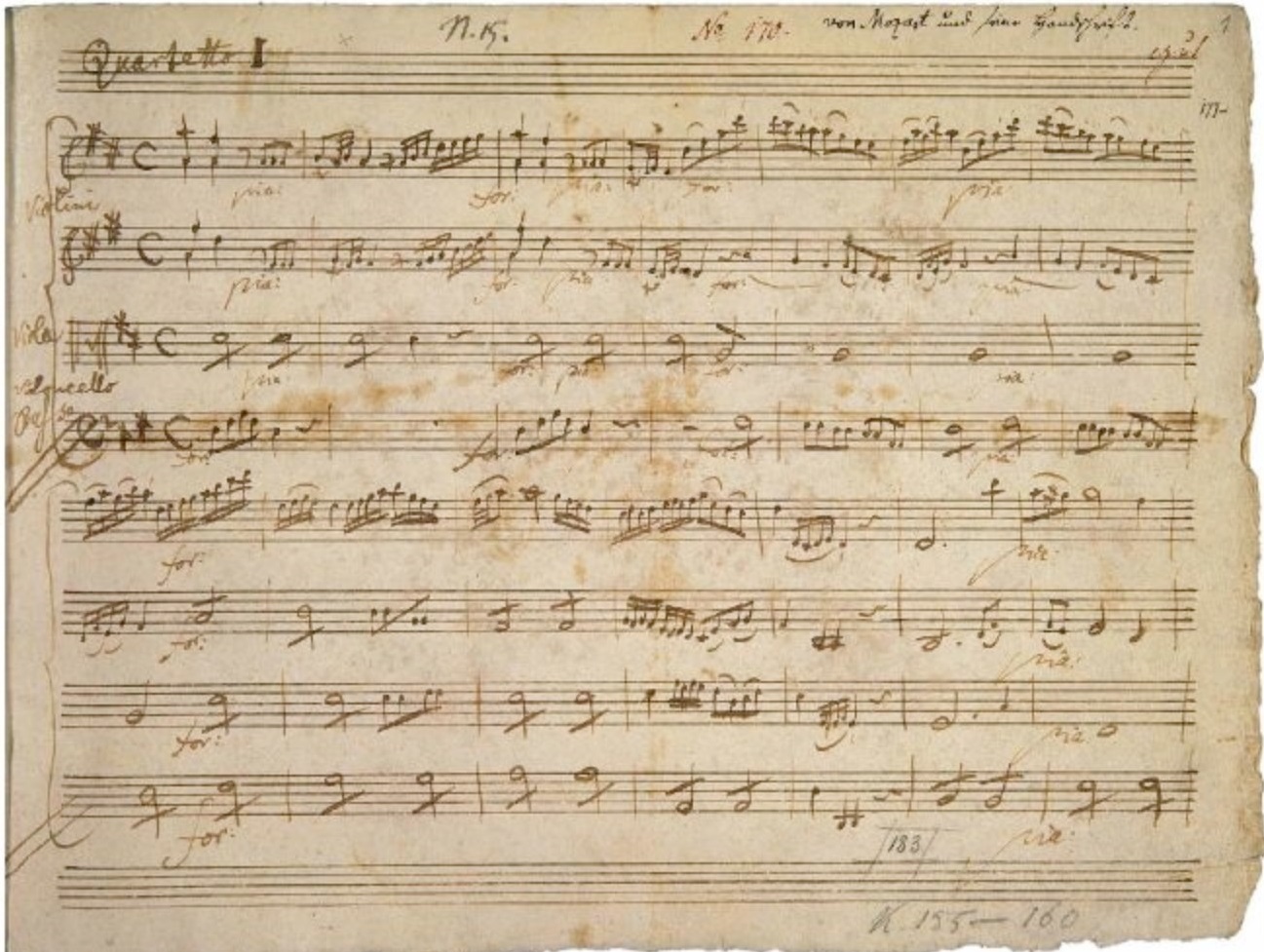 Clearly to be seen is Mozart’s heading “Quartetto I” (the “I” corrected from the original “p[ri]mo”). So, must Mozart have composed (in Bozen) this quartet as the first of the six? But watch out: The heading “Quartetto” here and within the other five works (K. 156 und K. 160 reads “Quartett” in German which Leopold later Italianised by adding an “o” at the end) could have been added at a later stage. Since out of the ordinary, he sort of schematically wrote the title six times in the very same position at the top left, this may indicate a later stage. The (thick) ordinal Roman numerals “I” to “VI” following the autograph “Quartetto” stem most probably from father Leopold Mozart. Because these numerals are unconnected and not in line with the title, he obviously added them at a later stage.

Published in 2006 was a fine facsimile of the autographs of the six K. 155–160 “Milan Quartets”, presently in the possession of the Berlin Staatsbibliothek, Preußischer Kulturbesitz; this facsimile is unfortunately still obtainable today only as an antiquarian item. Its scholarly commentary leaves, though, much to be desired. [1]

Each of the six quartets was composed separately and without a date, a signature, probably without a title and certainly without a Roman numeral. A number “I” – for whatever quartet heading – would have been completely nonsensical in Bozen, or at least premature because there was no plan for a cycle of six works when Mozart set to work there on a “quatro”. This is indicated by Leopold Mozart’s extremely marginal ‘out of boredom’. If a veritable cycle of six string quartets had already been planned on the way to Milan, Leopold Mozart would have reported it in a different tone and with a different choice of wording.

No, it was only when the six quartets were largely or even entirely completed that they needed to be ordered, a subsequently determined binding succession – perhaps for a planned printing? The experts amongst my readers might want to contradict me at this point by referring to the series’ obviously systematic key sequence: wouldn’t the methodical arrangement in the strictly descending circle of fifths, D – G – C –  F – B flat – E flat, indicate a compositional succession – already born in Bozen? I don’t think so. For, keeping in mind the keys Mozart uses in principle (i.e., considered suitable) for works of the string-quartet genre, then his potential stock of keys – in the major – is reduced to seven(!): C, D, E flat, F, G, A, B flat. (Mozart’s two quartets in the minor, K. 173 and 421, are in d minor.)  No other key occurs in Mozart’s entire string-quartet oeuvre. In our case (“missing” is an A-major quartet), just to give several possible subsequent sample orderings, he could have ordered his six Milan string quartets in ascending fifths from E-flat major, in ascending seconds from B-flat major or in ascending thirds from C major.

By the way: the last-named principle of ascending order of thirds occurs in Mozart’s string-quartet cycle, K. 168–173, composed a few months later in Vienna (summer of 1773):  F – A – C – E flat – B flat – d. Owing to the inclusion of the d-minor quartet, K. 173 (instead of the “missing” G-major quartet that would have better fit into the series in terms of key), to have remained systematic, he should have opened the arrangement system by thirds with the B-flat-major quartet: B flat – d – F – A – C – E flat. But interestingly more important to him than consistency in systematic key sequence was the d-minor quartet to “crown” the conclusion of the series.

Finally, in the illustration above we can see still another indication that the number 1 of the series was certainly determined later: Mozart – instructed by his father? – corrects the incorrect plural “Viole” to “Viola”, and to the ambivalent functional designation “Basso” he adds the specific instrument name “Violoncello” in the solo string quartet, though he wrongly left his designated instrumentation scoring uncorrected for K. 158 (“Viole” and “Bassi”) and for K. 159 (“Basso”). The ultimate correction solely on the first page of K. 155 should therefore be uniformly valid for all six quartets. Or vice versa: Because K. 155 was subsequently determined to be no. 1, Mozart had only to correct or adjust, accordingly, the designated instrumentation scoring of this quartet. (My preface to the Urtext edition, soon to be published, details the historically interesting scoring topic of the “Italian String Quartets”: Mozart, Streichquartette (Italienische Quartette und Salzburger Divertimenti, volume 1, HN 1120 [parts edition] and HN 7120 [pocket score]).

That Mozart thus composed the D-major quartet, K. 155, in Bozen, of all places, is true with a probability of exactly 1/6 or just under 17%! But, to be clear, Mozart did not compose a veritable string quartet in Bozen at all.

On the so-called “Bozen Quartet”:

All six quartets are written on identical music paper, a coarse paper rastral-lined with 10 staves from a Northern Italian paper mill, identified as “WZ 30” in Alan Tyson’s watermark catalogue (NMA X/33, section 2). According to Tyson, Mozart ‘acquired and used this paper for the first time in Milan at the end of 1772’  (Tyson, p. XXI). If so – and who’d want to doubt Alan Tyson’s authority regarding these matters? – then none of the quartets in question could have been composed and written down in Bozen or elsewhere on the trip to Milan. So, Mozart, foul-tempered, presumably used his free time in Bozen at best for sketching or jotting down initial ideas and drafts for a string quartet (Leopold says ‘is writing…a quatro’, though no traces of any kind of manuscripts have survived). It remains speculative if such preliminary stages found their way into one of the specific six quartets at all.

If his son wrote anything in Bozen at all! For “composing” did not necessarily mean “writing down” for this genius:

Mozart’s letter of 30 December 1780 from Munich to his father.

‘… Well, I must close, for I must write head over heels – everything is already composed – but not yet written.’

The six quartets were thus first composed in Milan, and I assume that simply for reasons of time, this was the case only after the première of his extensive opera seria “Lucio Silla” (end of December 1772). In particular, only after the actual reason for the trip was dealt with. And it was precisely in this phase, actually, in early 1773, that Mozart had plenty of time to compose such occasional works. The return trip to the Salzburg court, long overdue after the turn of the year, was deliberately delayed by all sorts of excuses (mainly owing to his father’s ostensible health problems). Leopold Mozart was eagerly hoping to receive news of a position that he had contrived for his son at the Tuscan court and had been pursuing. The waiting time was sensibly used for, amongst other things, composing the said string quartets. And therefore one month before departure, Leopold tersely reports again to Salzburg: ‘Wolfg: is writing a quartet’ (Leopold to his wife Maria Anna, Milan, 6 February 1773). When the ultimate rejection from Florence finally arrived, father and son travelled back to Salzburg at the beginning of March with the six string-quartet autographs in their luggage.

[1] Thus, for example, Giacomo Fornari to our great surprise recognises that the G-major quartet, K. 156, is in four movements (Preface, p. 20); he thereby totally overlooks the autograph deletion and replacement of the slow movement and therefore seems not even to know the works he is writing about. Or, he claims (p. 20, footnote 16) that Wolfgang Plath has attributed the thickened Roman numerals in the titles to an unidentified hand, which assertion is not correct [i.e., by Leopold, see above] and also wrong in terms of quotation [Plath states the following in footnote 22 of his NMA preface: ‘The ordinal numbers I to VI may have been subsequently added by Mozart in the headings.’]. Fornari also blusters about the ‘variety of ink colours used’ (p. 20) and fails to recognise that all six quartets, including all titles, were continuously written in the same medium brown ink. Finally, Fornari gives a wrong date for Leopold Mozart’s letter (October 22, 1772, instead of the correct date: October 28, 1772, see above) and he quotes my master thesis (1987) in his footnote 17, but with the publication date of my dissertation (1992) – both books he certainly never consulted. Fornari should also have taken note of the critical report published in the pertinent NMA volume in 1989. There I precisely describe the autographs’ manuscript issues.