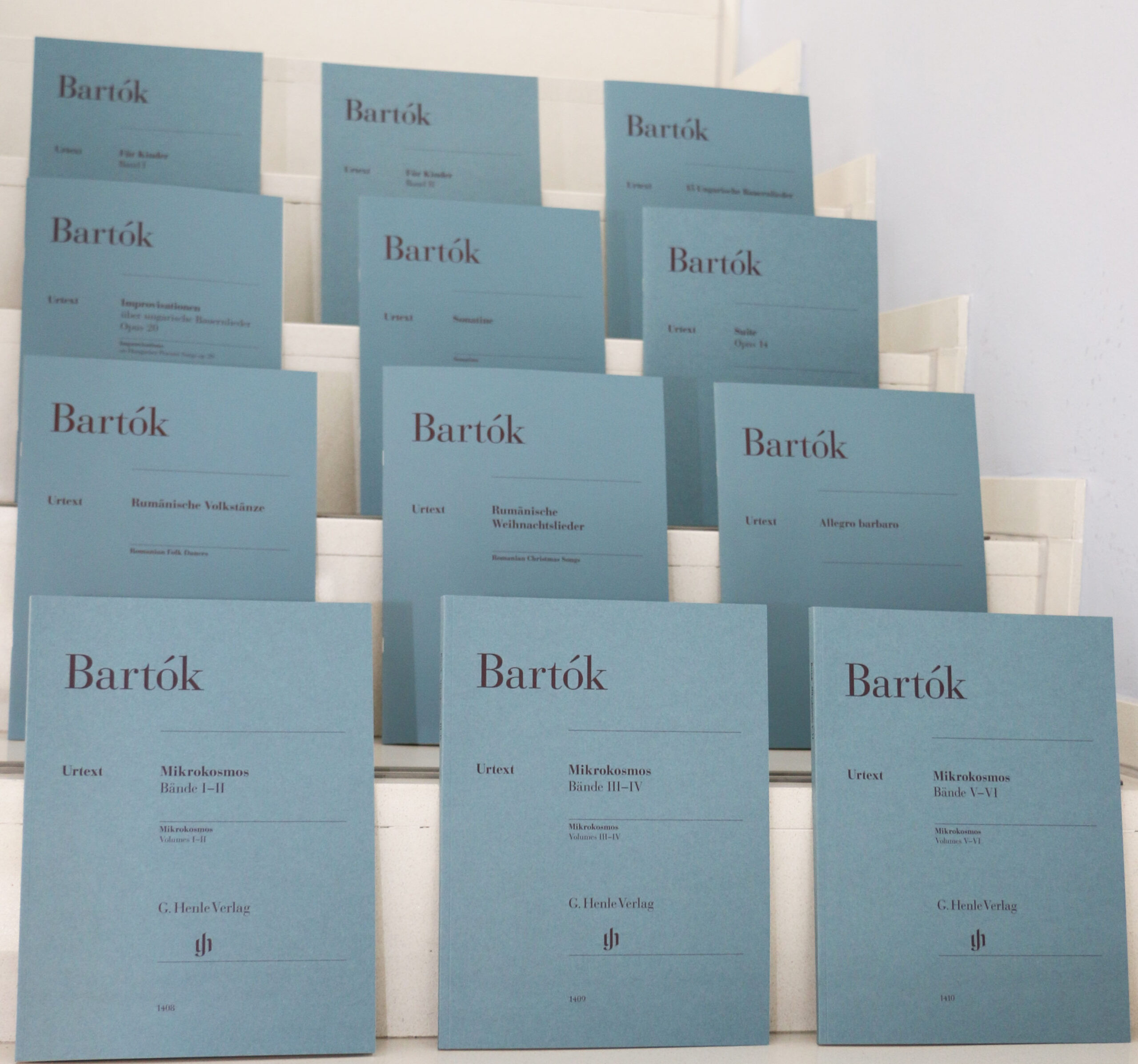 Since one of the special features of the Henle Verlag catalog is the fact that composers’ scholarly Complete Editions also serve as the basis for our blue-cover practical Urtext editions, our Beethoven, Brahms and Haydn editions have been passing on this in-depth research directly to musicians. This has been particularly true for Béla Bartók since 2016: the Complete Critical Edition, launched five years ago, has given rise to nearly 20 Henle Urtext editions of Bartók piano works– but that’s just the start of it….

The Bartók Complete Edition is published trilingually (in Hungarian, English and German) in collaboration with the renowned Hungarian publishing house Editio Musica Budapest (EMB), which in turn also produces practical editions for its local, Hungarian market. 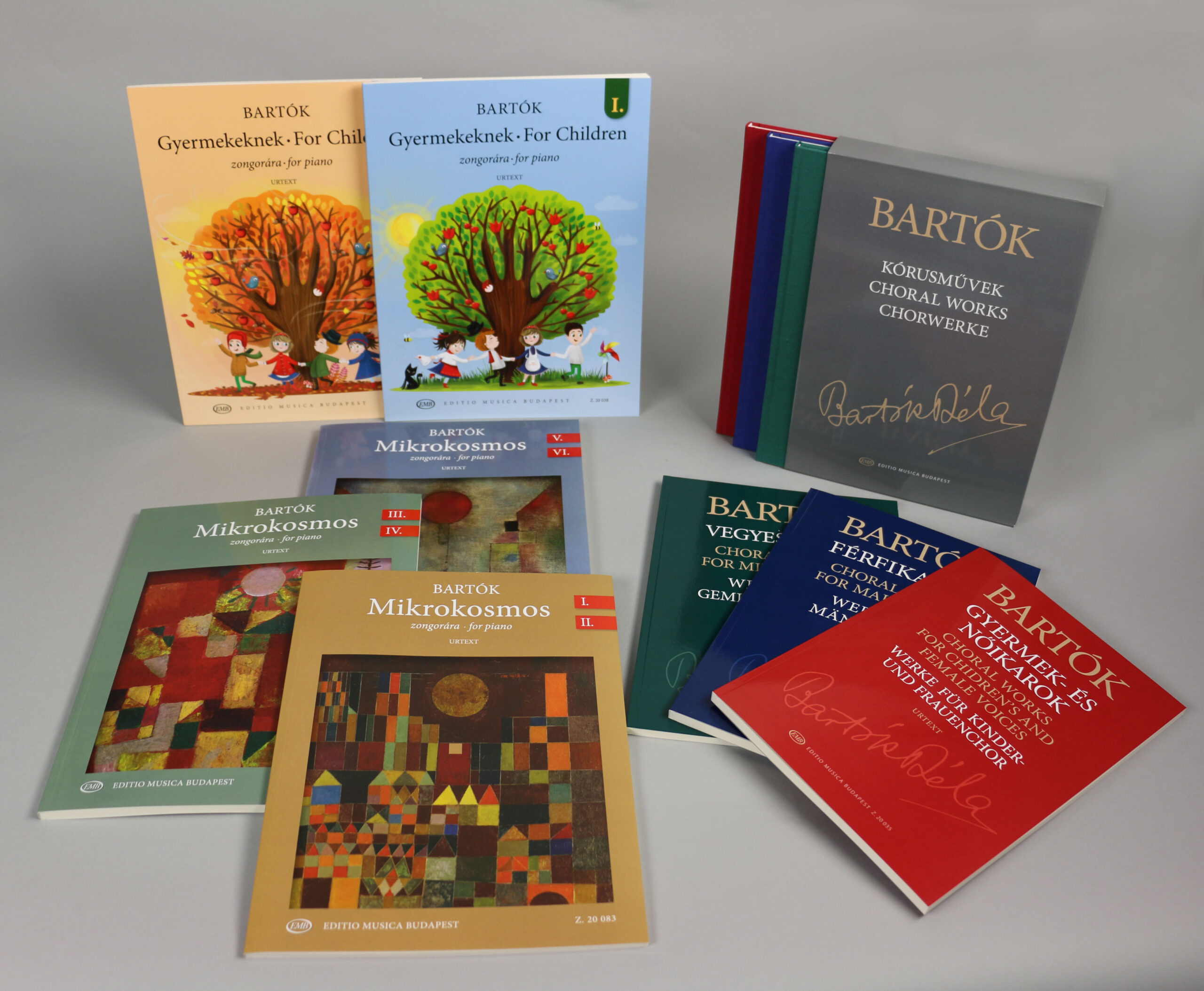 What’s more, the Complete Edition also includes orchestral and choral works that will be utilised by EMB in various practical-usage forms such as the conductor’s score and parts for the Concerto for Orchestra or the carefully laid-out choral scores of several vocal works very popular in Hungary.

Responsible for all of this is Márton Kerékfy, EMB editor-in-chief and concurrently member of the Complete Edition’s editorial board. Today, he is going to give us just a glimpse into the diversity of these practical editions spawned by the Complete Edition. 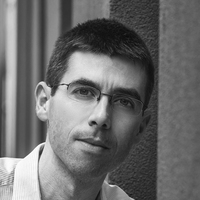 Márton Kerékfy (MK): Traditionally, EMB has two priorities: music by Hungarian composers and music pedagogy. These two fields superbly intersect in Bartók’s educational works such as For Children and Mikrokosmos. Both series form the core of the piano curriculum in Hungary, and so they too have been essential elements of our catalog, as ever. The newest EMB editions of For Children and Mikrokosmos came out in August 2020 and March 2021, respectively. Their music texts, complete with appendices containing early versions and transcriptions of Bartók’s own recordings, are the same as those in the Complete Edition. Preface and the Editorial Comments are in Hungarian and English, the English version being largely the same as that in the Henle Urtexts. Unlike those in most critical editions, the Editorial Comments in these Bartók editions deal not only with the sources or textual problems, but also provide essential information on Bartók’s notation and performance practice. This, I believe, is a really useful feature of our editions.

AO: And how do these new editions of the piano works differ from earlier such editions? 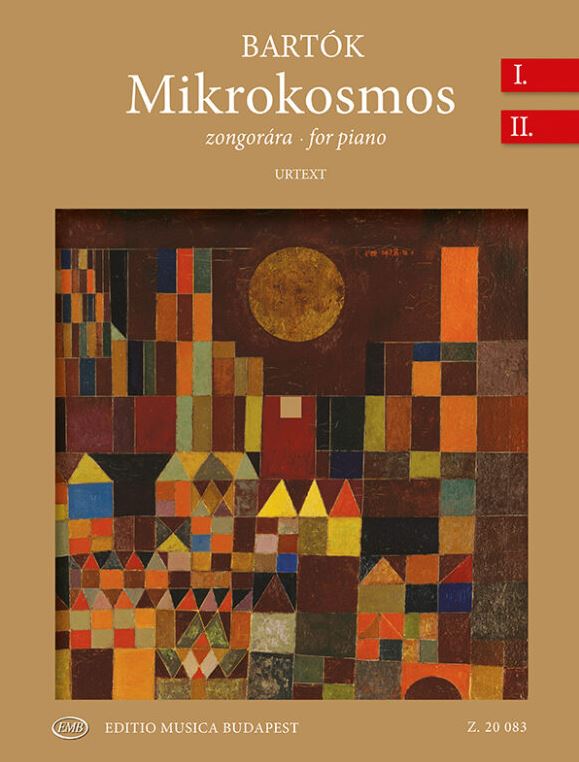 MK: The new editions already differ from the earlier ones in that they consist of two instead of four volumes (in the case of For Children) and three instead of six volumes (in the case of Mikrokosmos). Each new volume has its unique, beautifully-designed cover. The Mikrokosmos volumes feature paintings by Paul Klee, who was not only acquainted with the composer, but whose artistic habitus parallels the musical attitude of Mikrokosmos. The earlier editions, edited by the composer’s son, Peter Bartók, were all licensed from Boosey and Hawkes (the publisher holding the copyright of these works up to 2016), with added Hungarian prefaces and notes. The new editions have new prefaces and explanatory texts as well as beautifully reset scores. A special feature of EMB’s new edition of For Children is that it includes an appendix containing the words of all of the folk songs, Hungarian and Slovak, on which the pieces are based. This appendix was included only in the first edition (published between 1909 and 1911 in Hungary), having been omitted from the revised edition (published in 1946 in the USA) because it was deemed unnecessary for the non-Hungarian and non-Slovak audiences. Yet, knowledge of the original words of these folk songs is essential for a competent interpretation. The new EMB edition also includes a literal English translation of the song texts.

AO: How important is it to produce the orchestral material from the Complete-Edition volume?

MK: The Concerto for Orchestra is the first orchestral work published in the Bartók Complete Critical Edition. A huge amount of scholarly work lies behind each volume. But in the case of an orchestral work, the results of this work can only have an impact on performance practice when new orchestra material is produced. In turn, producing the set of orchestra parts provides a unique opportunity for publishers to “test” the score of the Complete Edition for both accuracy and practicality. In the course of preparing and checking the Concerto parts, we even discovered some minor errors in the Complete Edition, which we were then able to correct in the conductor’s score. The orchestra parts were carefully prepared in terms of accuracy, easy legibility, as well as reasonable cues and page turns. The parts were then tested by the Hungarian National Philharmonic, a leading orchestra uniquely experienced in playing Bartók. The conductor’s score and the parts share the same big format (25×32.5 cm) and are printed on superior-quality paper. So, the new Concerto material, I believe, surpasses in every respect the existing material published by Boosey & Hawkes (a very fine set of material, by the way). This new material is available from our partner distributing our Bartók orchestra materials, Universal Music Publishing Editio Musica Budapest. 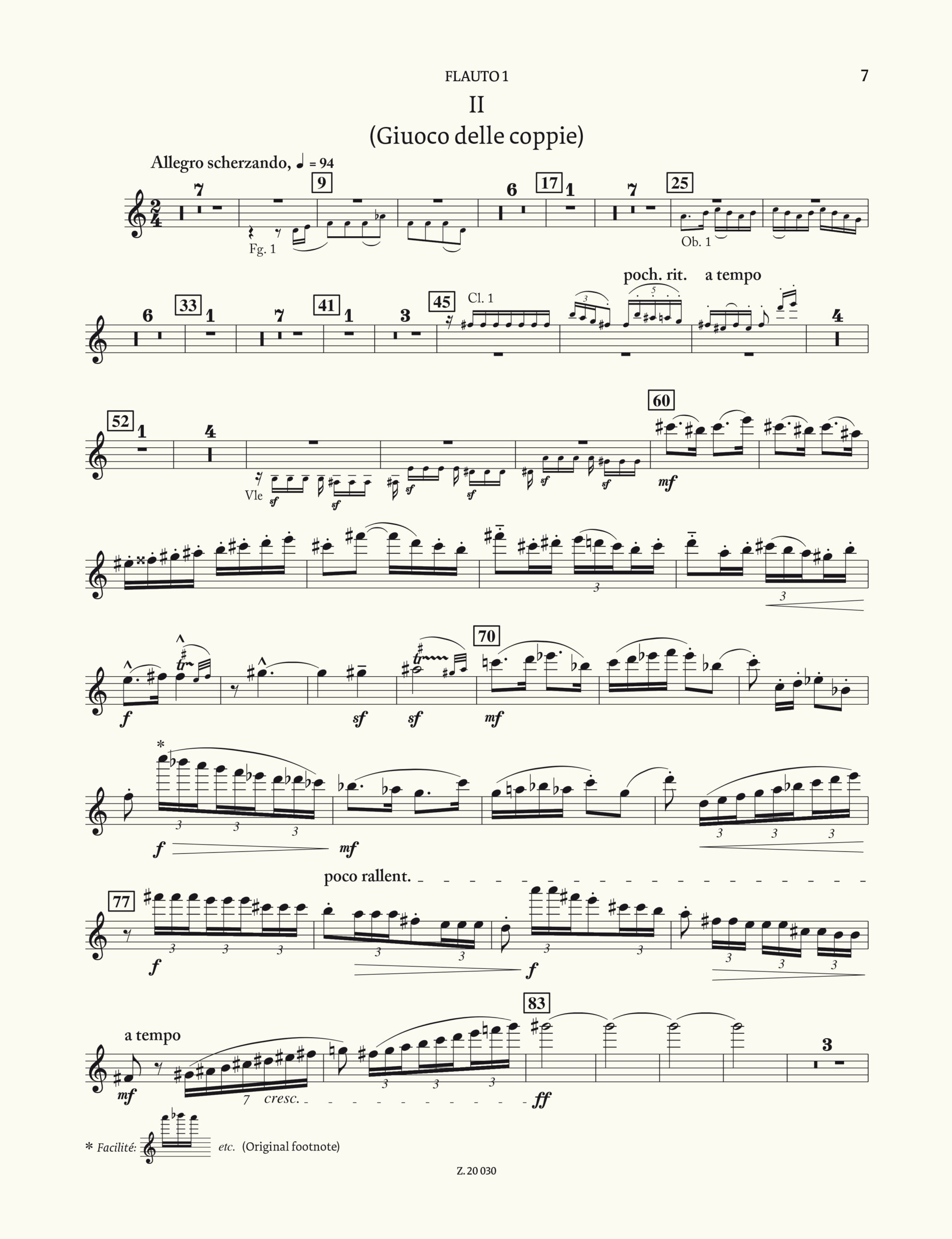 AO: What does the new choral edition offer from the Bartók Complete Edition?

MK: The new Urtext edition of Bartók’s complete choral works is available in the form of various publications tailored to the needs of diverse groups of customers – from schoolchildren and amateur choristers to professional singers, choral conductors, collectors and libraries. The choral works appear in three volumes, for children’s and female voices, for male voices and for mixed voices, with each choral work to be published also separately. The volumes are complete with informative Prefaces (in Hungarian, English and German) and detailed Editorial Comments (in Hungarian and English). The Comments give an overview of the textual, folk-music and compositional sources, and provide detailed information on the performance practice of the works. In addition, literal English translations are provided in the appendix. All these contents are an extra bonus, as compared to our earlier editions, and I sincerely hope that they will help to familiarise singers and choral conductors who do not speak Hungarian, Slovak or Romanian, with these little Bartók gems that are so little known outside Hungary. 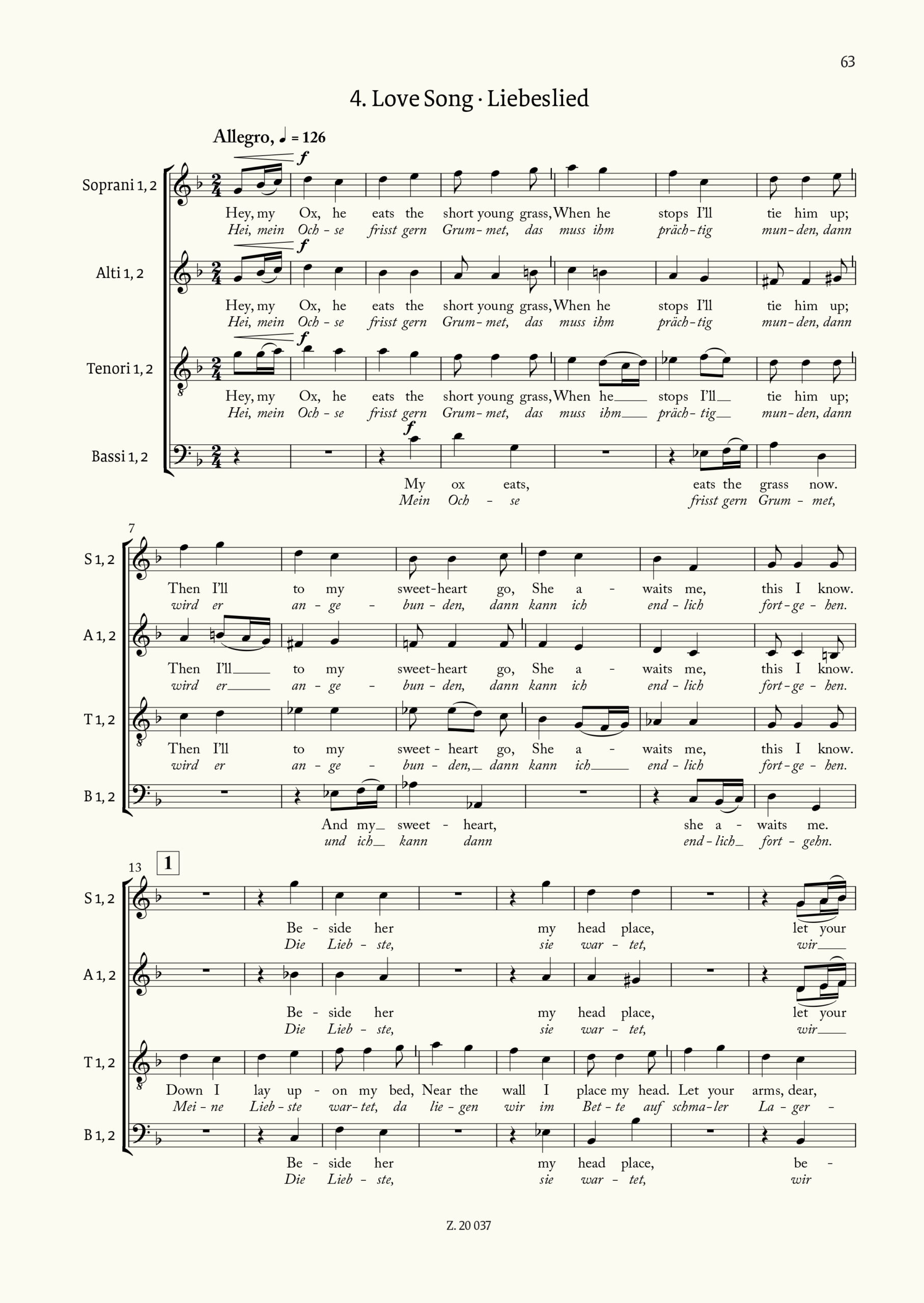 No. 4 “Love Song” from Hungarian Folk Songs for mixed voices (with English and German words).

AO: Last but not least: Will the new EMB editions lead to different performances and/or to a new view of Bartók?

MK: I hope that the correct and easy-to-read scores will motivate performers to broaden their Bartók repertoires and even to discover lesser-known works. (By the way, one of the works for female choir, the Two Romanian Folk Songs, has never before appeared.) The information on Bartók’s notation and performance practice included in these editions may especially inspire musicians to strive for a more authentic and perhaps also more distinctive performing style of Bartók’s music.

AO: Warmest thanks for this interview!

This entry was posted in Bartók, Béla and tagged Bartók, Márton Keréky. Bookmark the permalink.