Peter Jost (PJ): Mr Rogé, you studied at the Paris Conservatoire with Lucette Descaves, formerly a student of Marguerite Long’s. M. Long was indeed still in close touch with composers such as Fauré, Debussy and Ravel. What role at that time did her fingerings play, and were they then ranked as authentic?

Pascal Rogé (PR): About fingerings, I remember a phrase of my teacher, Lucette Descaves: “Fingerings are like shoes, they don’t fit anyone”. Something I often repeat to my own students, BUT if my teacher was not “directive” on her fingerings, she had a few “principles” that were very helpful: “always follow the shape of your hands… avoid turns… if you have a choice, certain fingers are more expressive… or more powerful… so, choose carefully…” and although she was a pupil of Marguerite Long, she disagreed with Long’s motto: “no thumbs on black keys”, a rule I personally never understood!

Concerning my knowledge about fingerings I also had the heritage of two great Masters in the subject: Yves Nat and Lazare Lévy. 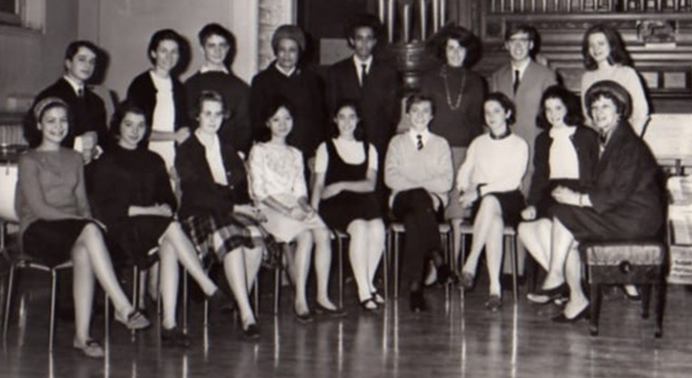 Lucette Descaves’ piano class in 1965. Lucette Descaves is sitting on the far right, the Labèque sisters next to her and Pascal Rogé in the centre. Standing fourth from left is Louise Clavius-Marius (1906-1975, with hat).

As to the question, “were there any ‘authentic’ fingerings”: Neither Fauré, Debussy nor Ravel were good pianists, so they hardly ever mentioned any fingerings, and when they did, I consider them as “suggestive” but never compulsory.

I am sure you are familiar with the words of Debussy in his Études’s first edition: “I intentionally do not mention any fingerings“, therefore: “Cherchons nos doigtés!” 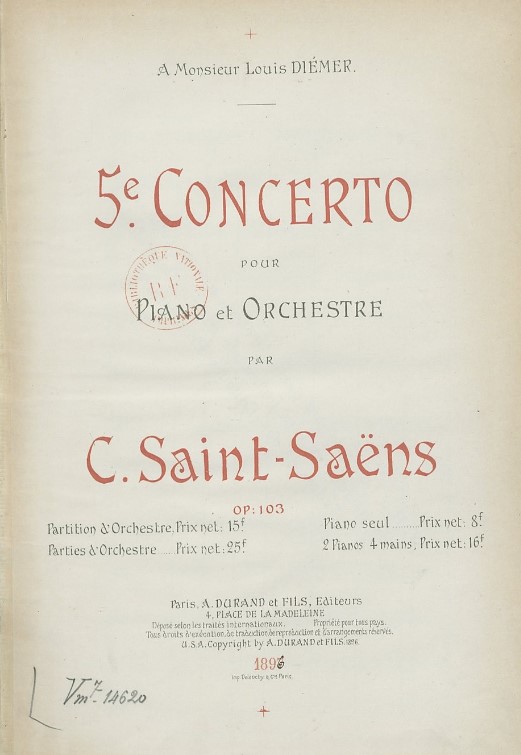 PJ: In our Debussy interview you observed that if you thought that the original fingerings and hand distributions would stand in the way of an adequate interpretation, you would then change them. I remember, for instance, the finale of the Saint-Saëns 5th Piano Concerto (HN 1144), measures 6 ff., where you reversed the hand distribution in opposition to the notation:

As the example here, in the Saint-Saëns 5th Concerto this “arrangement” is mainly to make Saint-Saëns’ wish possible, to accent the top note of the chord, something very difficult to achieve if played with just one hand, for then the accent would undoubtedly involve the whole chord.

PJ: You go even a step further in the first movement of Fauré’s 1st Violin Sonata (HN 980) and cancel the composer’s own explicit hand distribution by means of his m. g. (m. 140):

Could you explain your view of this spot?

PJ: You have taken on fingerings for the three Satie titles (Sonatine bureaucratique HN 1075, Avant-dernières Pensées HN 1181 and Nocturnes HN 1205). This may surprise us at first, since coming from his Gymnopédies or Gnossiennes, his piano works are considered relatively simple. But is there still another aspect besides what’s technical?

PJ: Could you demonstrate this with an example?

PJ: What role do fingerings play when you yourself are teaching, such as in your master classes? Is this an important issue, or is it an aspect only occasionally addressed?

PJ: I thank you very much for this interview and look forward to our collaboration on further editions in the G. Henle publishing house.