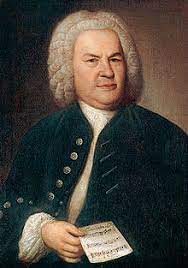 If you’re looking for a simple answer to the question about the source situation for Johann Sebastian Bach’s works, it is that the situation is neither really “good” nor “bad”. Bach’s compositions have come down to us in many and various forms: Sometimes these are admirable fair copies such as for the St. Matthew Passion or for the Inventions and Sinfonias (see our edition HN 589); some are extant only in copyists’ manuscripts, ultimately leaving open whether Bach actually composed the work in question (a famous case: the d-minor Organ Toccata BWV 565, see our edition of the Busoni arrangement HN 1479.

Works exist, in addition, that Bach later revised after originally composing them – and it is precisely these revision stages that are often insufficiently documented. So, that’s more or less how the infamously nightmarish source situations came about for the six solo Cello Suites BWV 1007–1012 or the French Suites BWV 812–817, both sets of works that Bach is meanwhile generally recognised to have revised, though no autograph and no consistently reliable copy of these revisions has survived. The source situation for the French Suites is therefore represented as follows:

Stemma for the sources. “C” is short for “copy”.

A real challenge for every editor (which Ullrich Scheideler masters with bravura).

Fortunately, there are other cases: Bach’s harpsichord concertos were also revised, though here everything is surprisingly well documented. Towards the end of the 1730s Bach made a fair copy of seven harpsichord concertos (an eighth concerto remained a fragment). The notation and structure of the autograph manuscript shows that he compiled these concertos as a group of works for whatever reason or occasion, now no longer known. One attractive hypothesis is that they were composed in conjunction with his commitment to the Leipzig Collegium Musicum and its performances in the Café Zimmermann, a forerunner of the Gewandhaus concerts. For all these concertos he went back to earlier material, that is, to solo concertos for other instruments, converting the solo parts into effective and virtuosic keyboard writing, most likely for himself as conductor of his ensemble from the harpsichord. The manuscript P 234 would hence be a repertoire collection that he compiled for his own purposes. But what does this have to do with the topic of “revision”?

In his seven harpsichord concertos, Bach was confronted, as mentioned, with the task of taking music originally written for solo strings or winds and arranging it for the keyboard. This was easy to do in music of that time by proceeding according to a formula: The solo part was given to the right hand whilst the left hand simply joined in with the basso continuo line. Extant is also this simplest kind of arrangement by Bach. The prefaces to our Urtext editions of the d-minor and E-major concertos HN 1380/7380, HN 1381/7381 also verify that kind of early arrangement stage for both of these concertos. But when Bach produced the composite manuscript P 234, he was already one step further along: In the solo passages the left hand takes on much more demanding assignments than just doubling the basso continuo, see, for instance, mm. 9ff. in the 1st movement of BWV 1052. 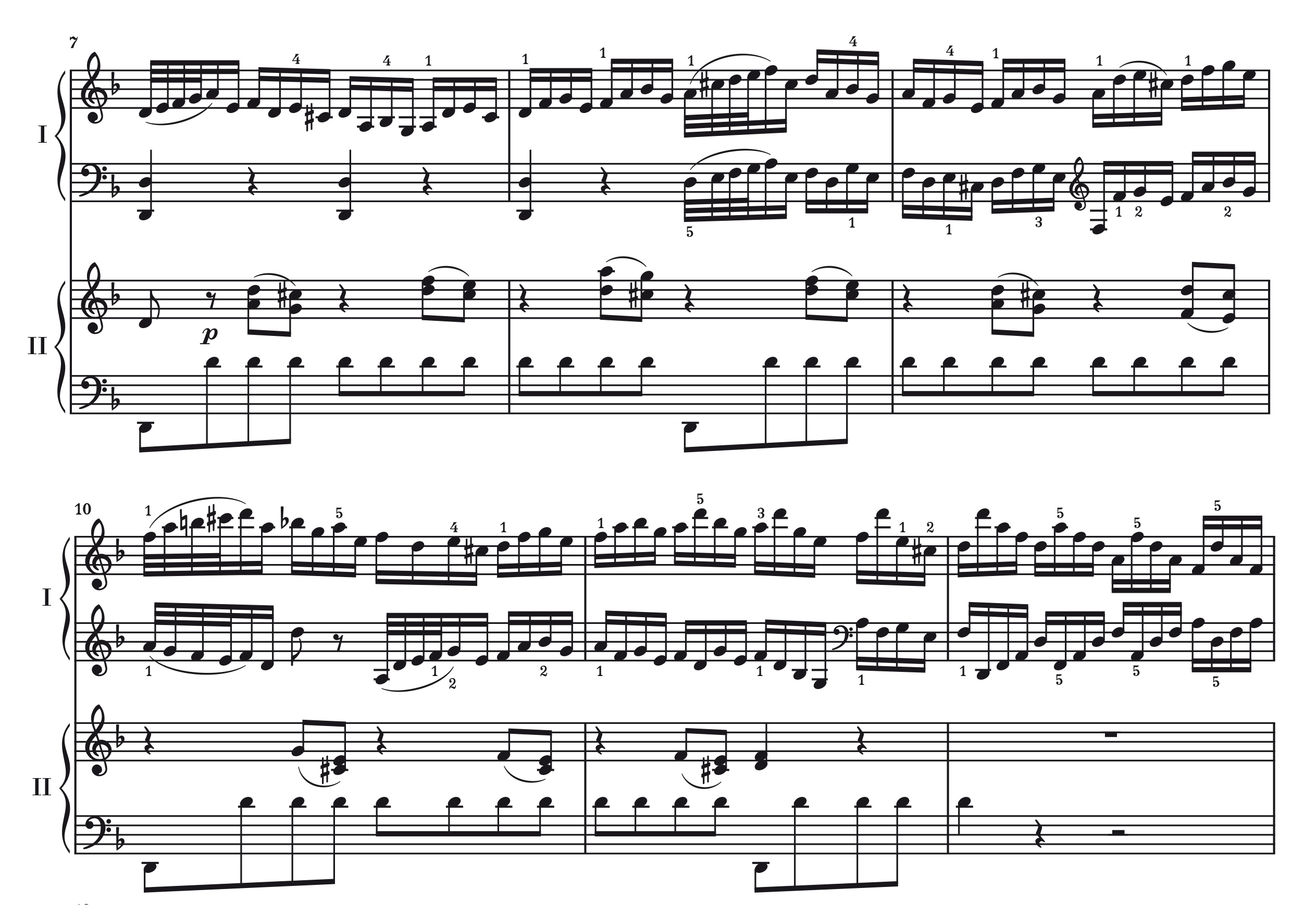 But that didn’t suffice, as he wasn’t so easily satisfied here with the right hand, wanting consequently to write something idiomatic for the keyboard; in the slow movements, particularly, he had to adapt the cantabile string or wind parts to the rapidly-dissipating harpsichord tone. This can be seen especially beautifully in the 2nd movement of the E-major concerto. Here, in a second step at many places in his autograph, Bach initially took over the simple melody line from the original solo concerto and then inserted numerous ornaments and runs into the blank staff above it, thus ensuring that the solo part ornamented in this way would also sound good on the harpsichord. 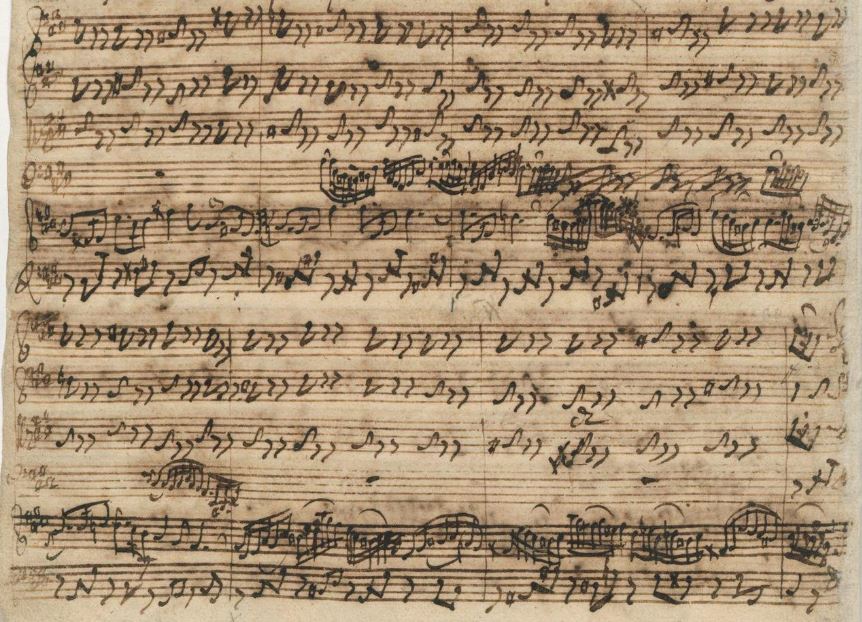 So, here is a revision within the autograph, clearly distinguishing the “before and after” and establishing the validity of the revision beyond any doubt. As an experienced blog reader, though, you can guess what comes next: This revision stage is regrettably still not Bach’s last word.

As fine as the composite manuscript was – playing from it in the Café Zimmermann was impossible. Performance material was needed: a solo part, together with string parts copied from the score by either Bach himself or by a copyist. Alas, in the case of the d-minor and E-major concertos, this original performance material is not extant, though we do, fortunately, have copies from Bach’s immediate milieu, bringing us a surprise. Whereas the string parts have been adopted from the score almost unchanged, the solo parts of both concertos have once again been fundamentally revised, though we do not have any solid evidence that he himself made this revision. But who else could have done it? Since, moreover, tradition coming from the Bach circle would have it that he very likely authorised these versions of the harpsichord part. Let’s once more take the Siciliano from the E-major concerto as an example: Bach’s ornamentation in his own score also showed up to a large extent in the later copy, but added were also other figurations and ornaments, especially. 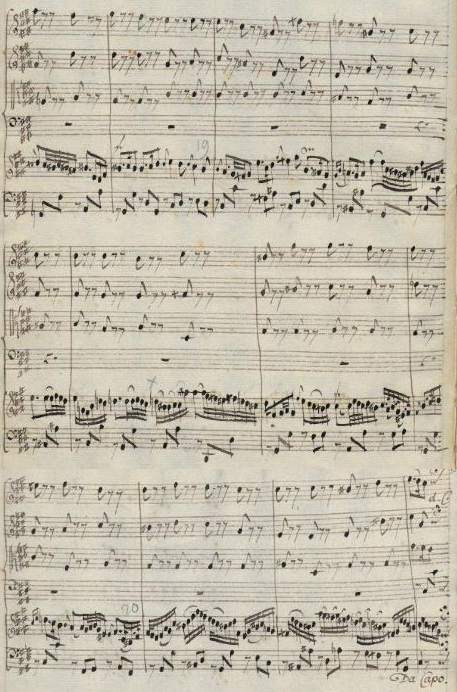 So, Bach’s revisions appear even in the harpsichord concertos, though here the last steps are not autographically documented. Unlike the French Suites, however, the extant sources are so reliable that an edition can rely on credible sources not posing any major problems. Since the Henle Urtext editions are based on the later copies, the beautiful autograph score is not our main source. Only in a very few places do we surmise that information may have been lost or misinterpreted during the numerous revision steps, such as, for example, a passage in the 3rd movement of the E-major concerto where it’s not certain whether or not the corrected autograph reading does in fact approach Bach’s intentions. Indicating this is a footnote in our edition. 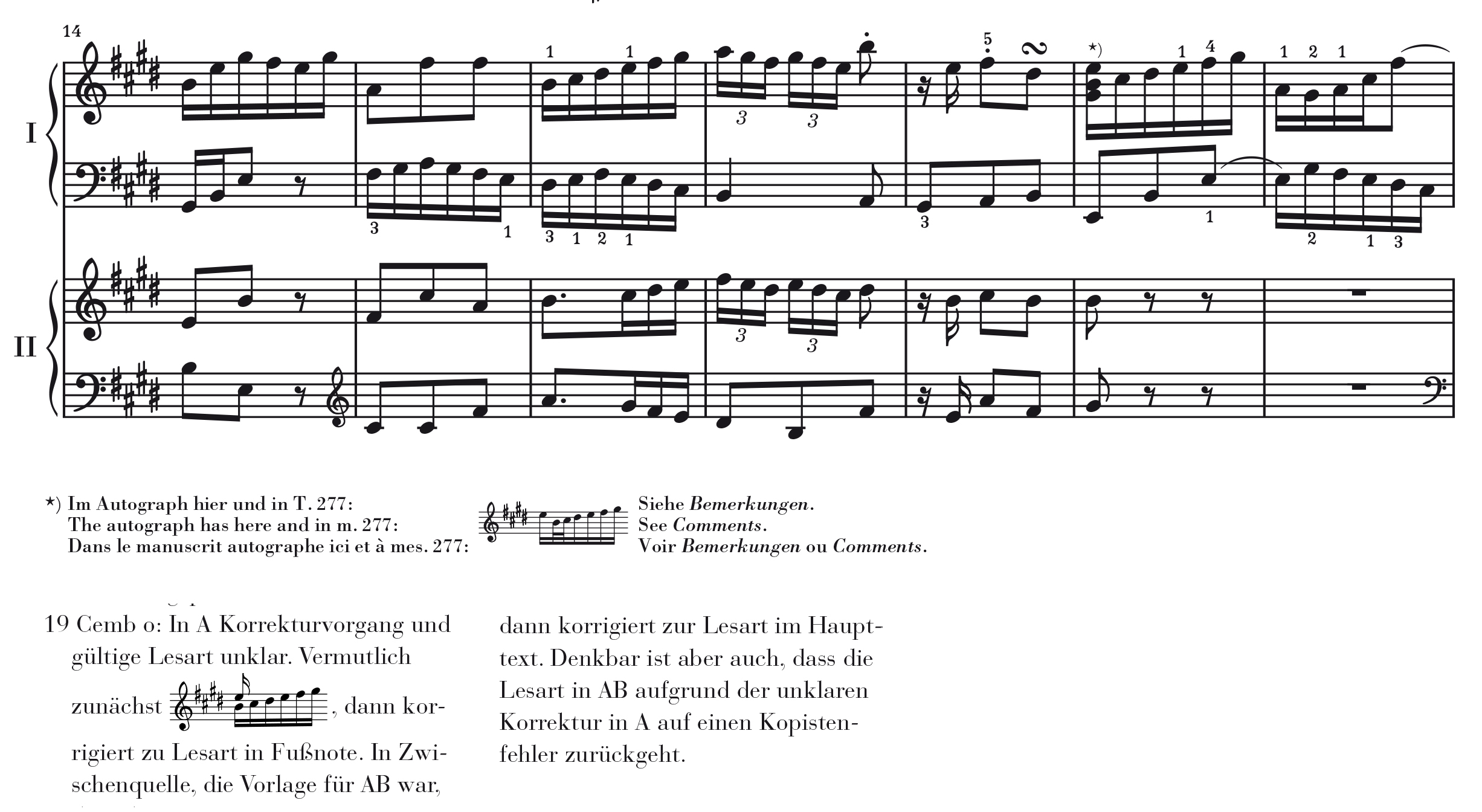 The Bach harpsichord concertos do have an exciting genesis history in their past, and the autograph score, valuable as it is, does not altogether reflect his final wishes in every respect. All this can be gleaned from our Urtext editions of the first two concertos – and the five remaining concertos will certainly be following in the years ahead. And to relax after all the reflections on sources and revisions, here is a classic recording of the wonderful Siciliano cited above.

One Response to »Bach’s harpsichord concertos and their autograph«