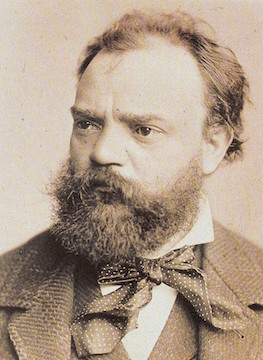 Even though recently the focus of attention owing to their anniversaries has been on composers like Debussy, Beethoven or currently Saint-Saëns, Antonín Dvořák seems to me to be the secret luminary in the Henle programme. Since 2015, no fewer than eleven new Urtext editions of his works have been published by our publishing house, amongst them, many large and central works of his oeuvre such as the late String Quartets opp. 96, 105 und 106, the Piano Quintet op. 81, the Piano Trio op. 65 and the Humoresques for piano op. 101. Our new edition of the Wind Serenade in d minor op. 44 (HN 1234/HN 7234) will be appearing in the next few days, completing the dozen. And so, of course, it goes on: already in progress for this autumn are Dvořák’s “Slavonic” String Quartet in E-flat major op. 51 and – a special highlight – his legendary Cello Concerto.

These composition’s quality and popularity with both musicians and the public is not in dispute – though in the case of the Wind Serenade, some promotion might seem appropriate, for it is undoubtedly less well known than many of Dvořák’s other compositions. Since the somewhat unusual scoring for 10 wind instruments, cello and double bass is normally too small for an orchestral concert and too large for an evening of chamber music, the serenade is rarely heard in the concert hall. “Thanks” to the Covid pandemic, however, such medium-size ensembles have come into vogue as of this last year, bringing us these very successful new recordings by musicians of the Frankfurt Radio Symphony Orchestra (YouTube link) and of the Zurich Tonhalle Orchestra – both highly recommended for listening!

No less a personage than Johannes Brahms judged: “The Serenade is probably the best of Dvořák that I’m acquainted with. Good ensembles have to blast it out lustily.” Admittedly, this quote comes from the summer of 1879 when Dvořák’s career was just taking off and his most famous works were still far from being composed. Brahms nevertheless placed the Wind Serenade above at least such well-known Dvořák compositions as the Moravian Duets, the Slavonic Dances op. 46, the Piano Concerto, the String Serenade in E major op. 22 or the String Quartet in d minor op. 34 (dedicated to Brahms!).

For our new Urtext edition of the Wind Serenade we were able to use sketches and the autograph full score as well as Dvořák’s personal exemplar of the printed score, together with other copies of the first edition score and parts. (As ever, a big “thank-you” goes to the Dvořák Museum in Prague for facilitating in general all our Dvořák editions by providing superb colour scans of the autograph sources.)

Although the autograph is naturally an important comparison source, it documents, as so often, only the initial compositional state. More than a year passed from the inscription of the score in January 1878 to the publication of the first edition, including the première meantime on 17 November 1878 – plenty of time and opportunity for the composer to still put finishing touches to small details. Extant, unfortunately, is neither the première material nor the engraver’s model for the first edition, but a precise comparison of the printed score with the autograph reveals a number of differences that can only go back to Dvořák’s deliberate interventions. Just one spot in the 1st movement is shown here as representative – an intentional change in the voice-leading of clarinet 2, bassoons 1/2 and contrabassoon: 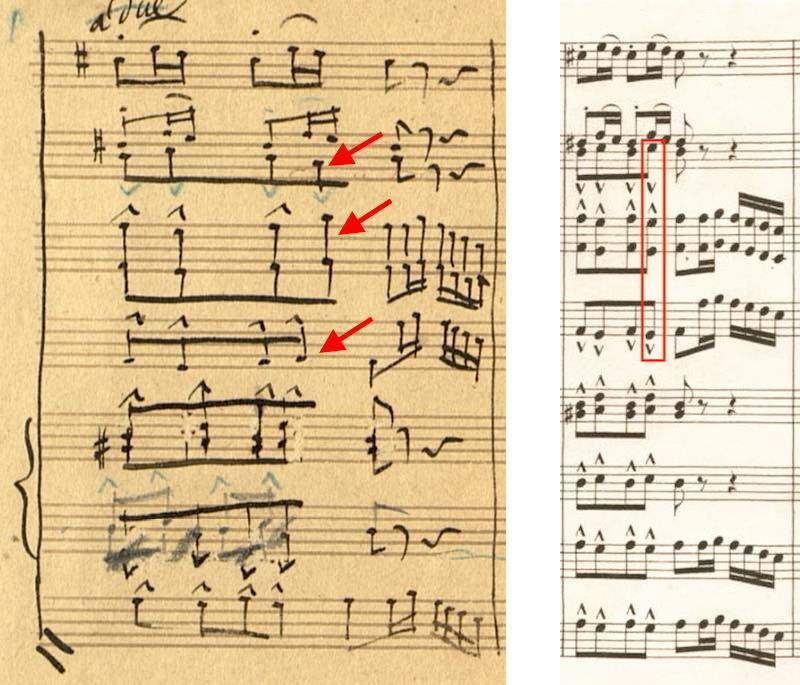 For this reason we have chosen the first edition, authorised and proofread by the composer, as the main source for our edition; it is certainly the final version – and not the autograph, the readings of which should be viewed with caution.

A look at the autograph sources nevertheless enables us to gain valuable insights, especially in terms of scoring questions. On the one hand, it is completely evident that from the outset Dvořák did in fact plan to score the string basses, that is, cello and double bass, not just adding these afterwards (a view occasionally to be found in the literature, for example, in the current version of the English Wikipedia article).

To be found already in the sketches are numerous instrumentation details such as “Cello” or “Bassi” – see the digital images in the Czech National Library. Even the score autograph shows no signs of a later addition to the string staves – this would be difficult to imagine in view of the often completely independent voice-leading, especially of the cello at the opening of the minuet, for example. Dvořák even desired a very strong scoring of the string basses – he notated “at least a twofold scoring” in German and Czech in the scoring information before the stave at the beginning of the score: 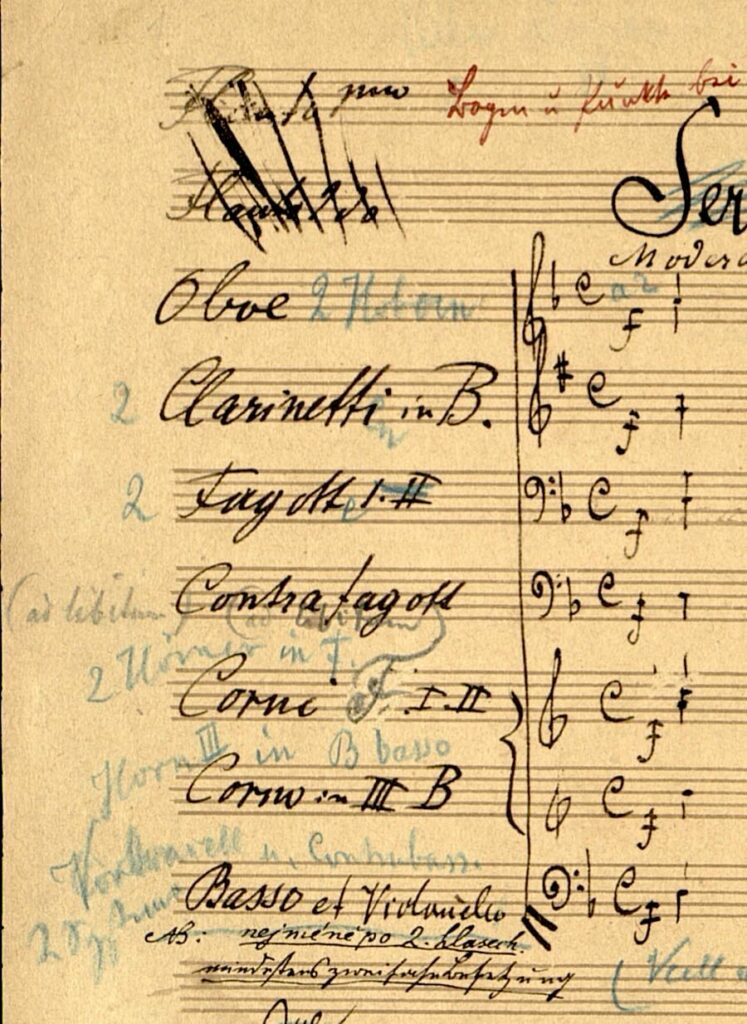 We know from a newspaper report about the première that two celli as well as two double basses were actually used there. The fact that only one cello and one double bass are ultimately mentioned in the first edition could go back to the Simrock publishing-house’s purely commercial wish to make the edition easier to sell. There is no written evidence of this, but there is an analogous case of the publisher’s wanting a different scoring simplification: instead of the contrabassoon – certainly a not very common instrument – Fritz Simrock seriously suggested that the composer use a bass tuba…! Dvořák thereupon replied: “In the absence of a contrabassoon, I think it would be better to write: ‘Contrabassoon ad libitum’. The tuba would really spoil the delicate colouring of the winds. So, if you have the bassoon, you should play it, if you don’t, you can do without it.” Thus, the “ad libitum” statement was made only at the publisher’s urging, and ensembles wanting to come as close as possible to the composer’s original sound concept should experiment with scoring both contrabassoon and double strings.

In closing, a curiosity should be pointed out in the scoring information shown above: the two flutes that Dvořák initially notated and crossed out again, probably found their way into the score out of sheer absent-mindedness; there is not a single reference to this instrument even in the above-mentioned sketches. Flutes would not have been inconceivable in this context, though: published just a few years before Dvořák’s Serenade were two works that used flutes in larger wind-ensemble scorings, Franz Lachner’s Octet op. 156 and Joachim Raff’s Sinfonietta op. 188. Dvořák could have known these works, but he presumably preferred Mozart’s and Beethoven’s classical serenade sound using oboes as the leading upper voices. Anyone, incidentally, seeing similarities to Mozart’s Gran Partita, K. 361, and surmising this as an inspiration for Dvořák, is certainly correct – but that’s the topic for another blog post!

2 Responses to »“…probably the best of Dvořák that I’m acquainted with.” What’s worth knowing about the Wind Serenade in d minor op. 44«