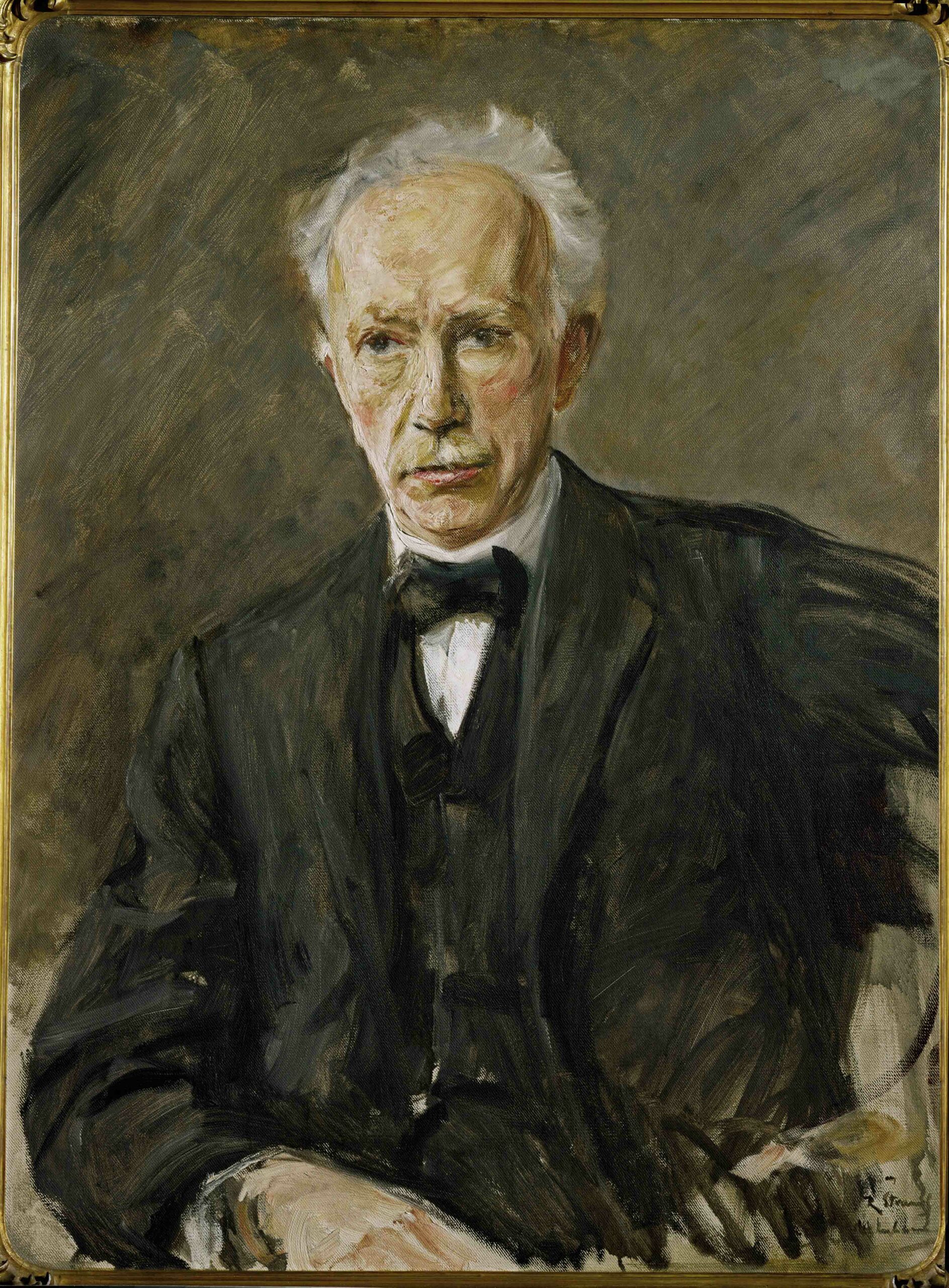 Incredible, but true: unannounced so far in this blog is the entrance last year in the Henle universe of one of the greatest of 20th-century composers – Richard Strauss! This is, of course, owing to a certain composer, “B”, whose 250th birthday we so extensively celebrated here that some things had to stand back. But now, finally, it’s high time to introduce Strauss to this forum. For this modern classic’s edition naturally presented the Henle editorial department with completely new challenges. Whilst my colleagues were dealing with instrumental music and, when editing duo sonatas and solo concertos, were settling questions of transmission and text in close collaboration with performing musicians, I, as lied editor, initially once had, totally banally, the agony of choice: where to start with the more than 200 lieder for voice and piano that Strauss bequeathed to us, each one more beautiful than the other? 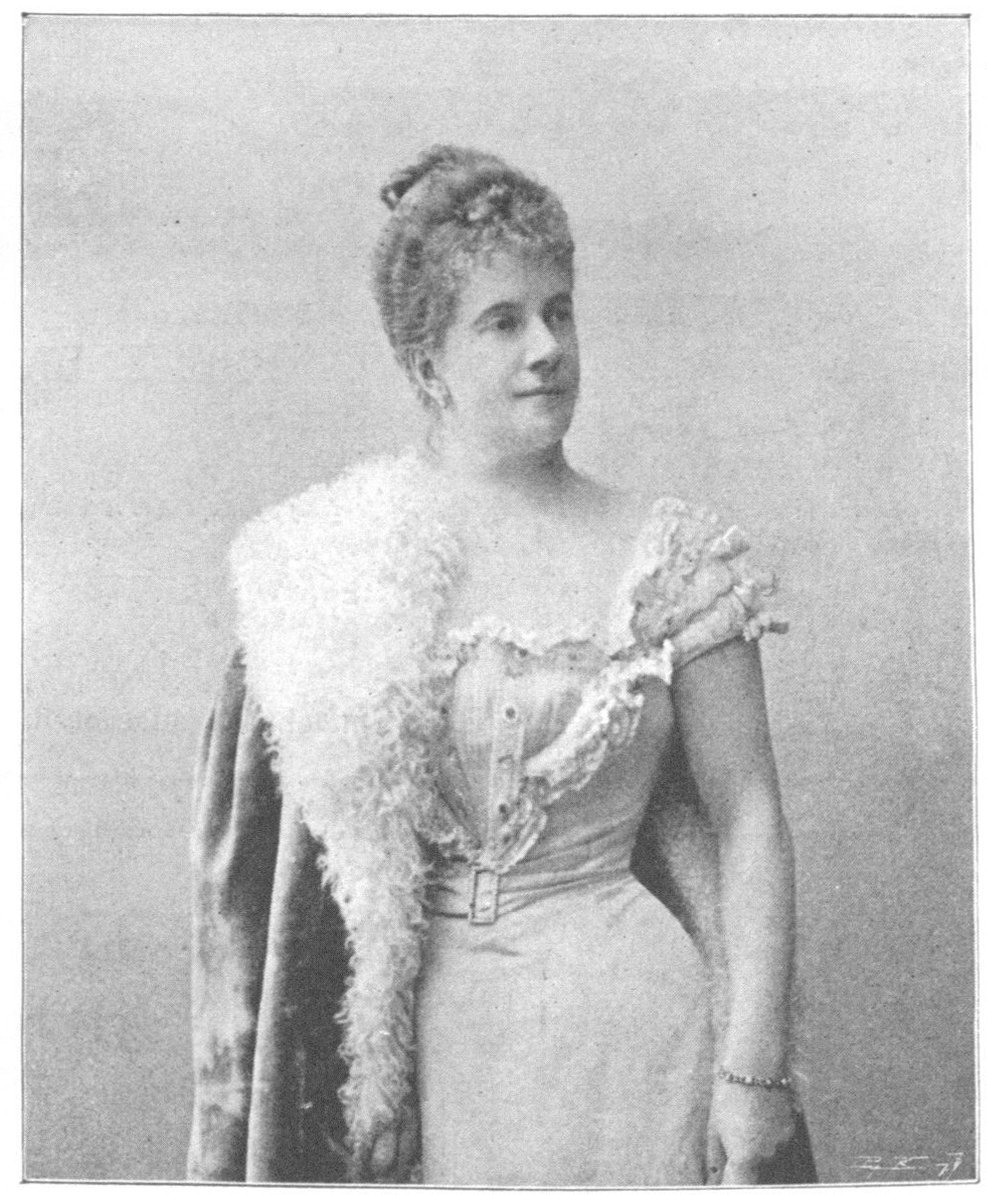 The lied runs right through Strauss’s entire oeuvre: from the grammar-school student’s first attempts in the 1870s to the numerous lieder groups compiled as opus numbers, some of which very rapidly appeared in print from the mid-1880s, right up to the famous Vier letzte Lieder of 1948. Strauss later orchestrated some of his lieder, many owing their origin and fame to outstanding singers – including his wife, Pauline de Ahna, with whom Strauss often performed until she retired from the stage (in 1906). As can be seen from the detailed information in Franz Trenner’s Richard-Strauss-Chronik, Strauss liked to combine individual pieces from different cycles – whether in pure lieder recitals or in large orchestral programmes, where heard between two symphonic poems were a few orchestral lieder. This certainly tends to contradict the thoroughly systematic grouping of lieder under an opus number – often devoted to a poet or topic and sometimes even pursuing a certain dramaturgy. But it was relevant to the performance practice of the time, when it was then happily customary to select just a single lied for performance, even from the cycles of a Schubert or Schumann.

It is, however, noteworthy that this Straussian solution of freely combining individual pieces has remained in effect even to this day: presenting a colourful selection from the various cycles is more often than not a norm for lieder recitals or on CDs. Even when all the lieder of a cycle are presented, they are not necessarily heard one after the other – hardly conceivable at a Schubert or Schumann programme. That this free treatment of Strauss’s lieder can also be traced back to the printed tradition became clear to me when I investigated the highly interesting publication history of the Acht Gedichte op. 10 and the Vier Lieder op. 27, located in which are the most popular of the Strauss lieder, Zueignung and Allerseelen (from op. 10) as well as Morgen! (from op. 27).

Both opus numbers were published by the Jos. Aibl publishing house in Munich, directed by Eugen Spitzweg, together with his brother Otto. Eugen Spitzweg, who was paternally devoted to Strauss, deserves credit for having supported the young composer as his first publisher, bringing out between 1881(!) and 1899, thirty of Strauss’s works, including chamber music, concertos, symphonic poems and his maiden opera effort, Guntram, as well as also nine lieder opus numbers with a total of more than forty lieder. And that, although Spitzweg had initially replied defensively to his protégé’s lied offers, that he “would prefer other things – you know my dread of vocal works”! 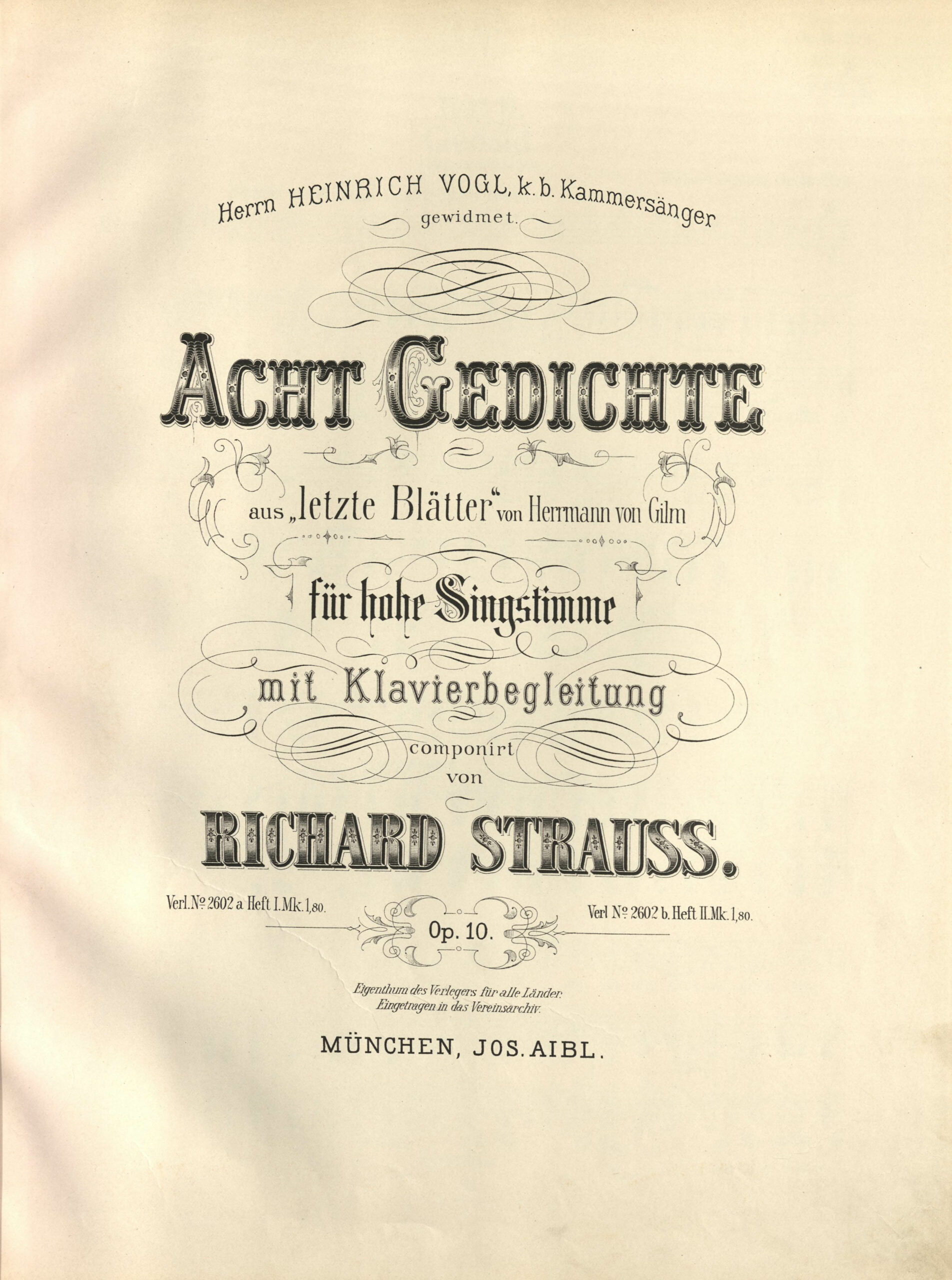 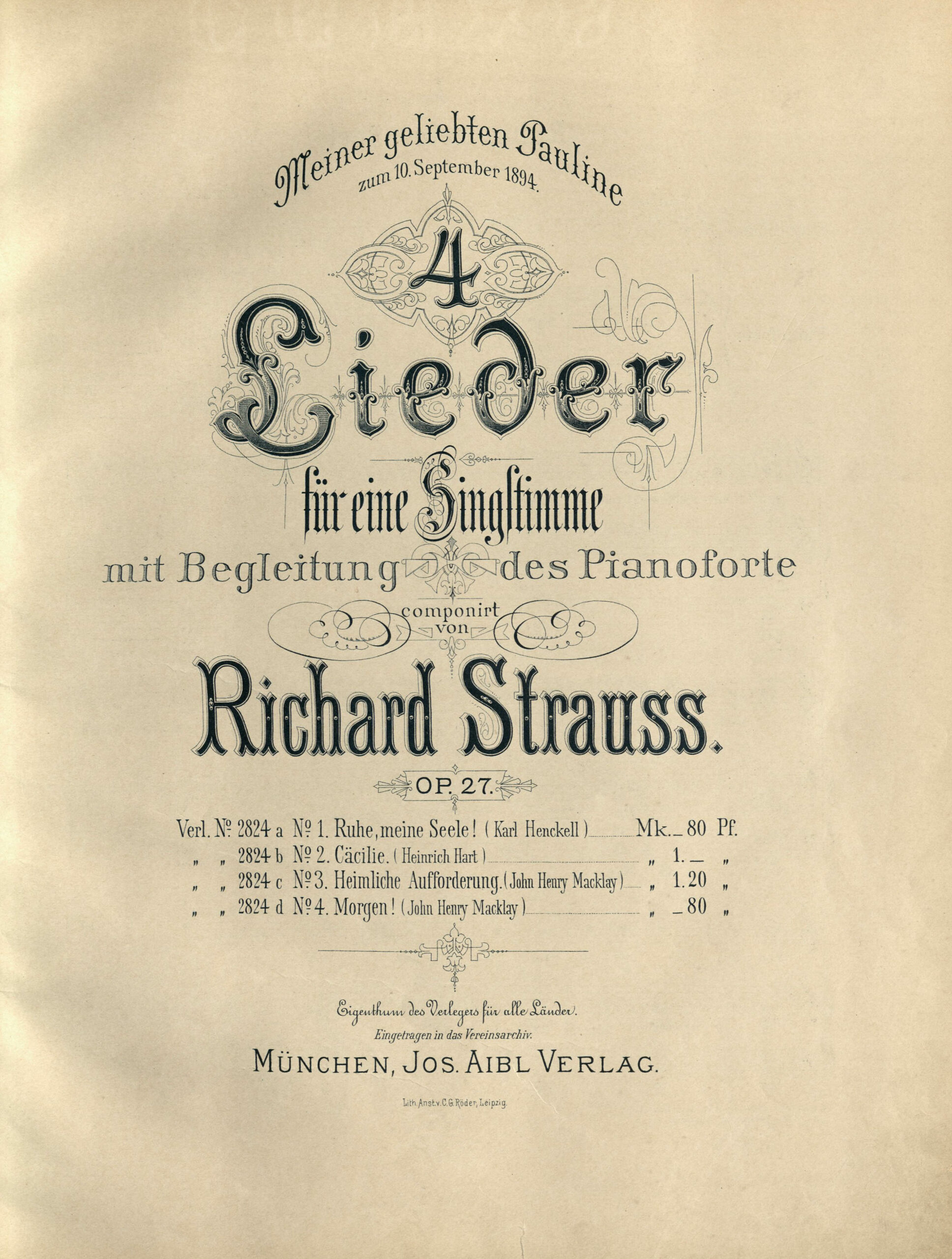 It all started in 1887 with the Acht Gedichte aus „Letzte Blätter“ von Hermann von Gilm op. 10 in two volumes, each of four lieder, followed by the likewise published volumes of opp. 19 (Sechs Lieder aus „Lotosblätter“ von A. F. Schack, in 1888), 21 (Schlichte Weisen. Fünf Gedichte von Felix Dahn, in 1890) and 26 (Zwei Lieder nach Nikolaus Lehnau, in 1894). The Vier Lieder op. 27, which Strauss presented as a wedding gift “To my beloved Pauline on September 10, 1894”, appeared in four single editions, as was to become the rule from then on.

Strauss himself suggested in the early 1890s that his lieder – usually composed for high voice – also be published in lower registers and in single editions, such as the Hamburg publishing house Daniel Rahter had been offering since 1887 for his lieder opp. 15 and 17. Spitzweg pursued both proposals so systematically, that in January 1896 he was able to offer opp. 10, 19, 21, 26, 27 and 29 in two registers in the Musikalisches Wochenblatt under the heading “Richard Strauss. Lieder für eine Singstimme mit Clavierbegleitung”, and would carry this principle over to future first editions. 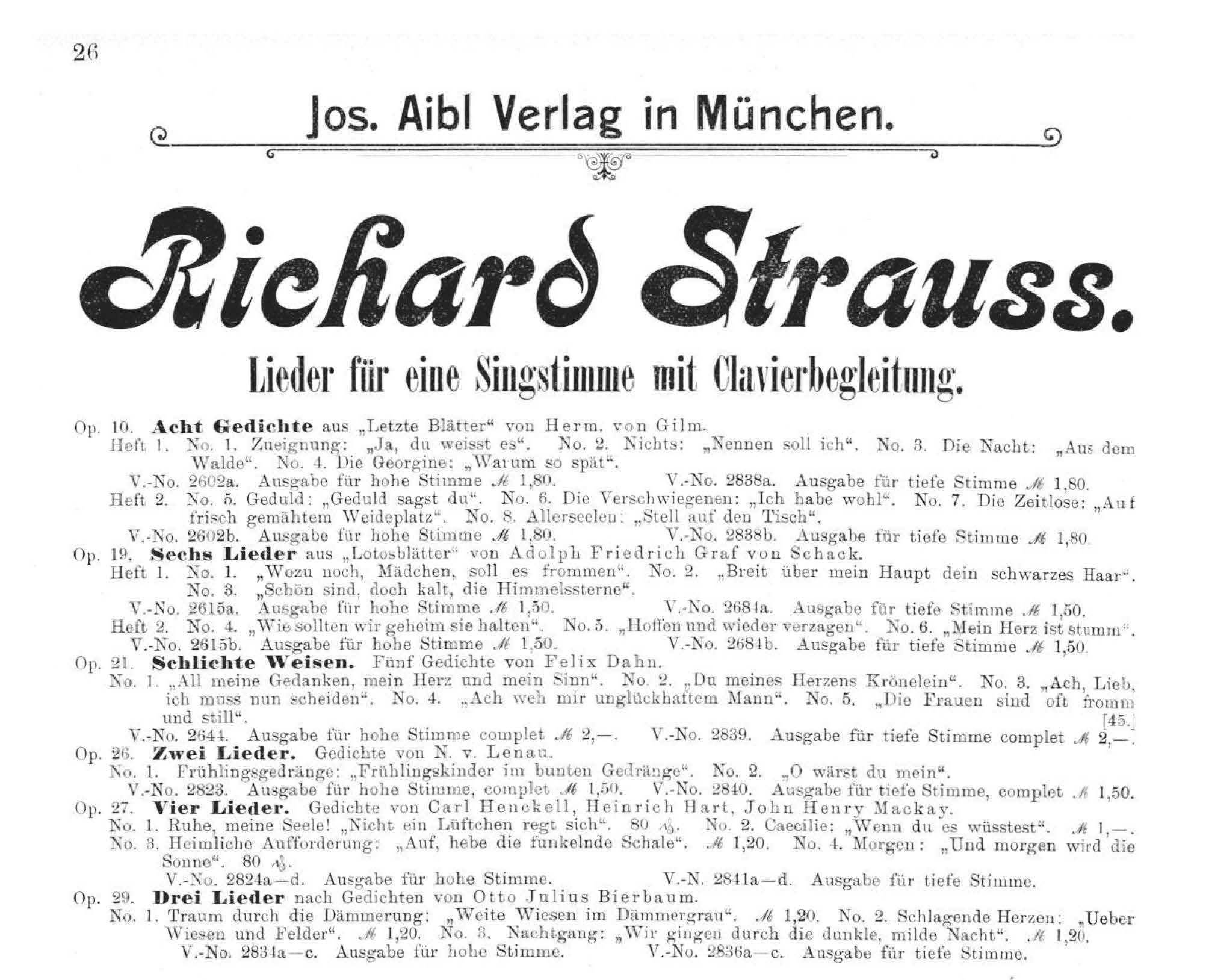 Clipping of an advertisement in the Musikalisches Wochenblatt, January 1896

But that’s not all: As early as 1887, the engraver’s model prepared for printing op. 10 included the directive “To be engraved so that there is space for a 2nd line of translated text”. So, a bilingual edition was already then being planned, even though it was not initially implemented – possibly at the request of the composer, who was at first sceptical about translating his lieder. But after Mädchenblumen op. 22 was published by Fürstner in a bilingual edition in 1891, with Strauss’s express authorisation, Spitzweg was also able to follow suit and thus secure the coveted US copyright. In consultation with Strauss, Spitzweg had John Bernhoff prepare English translations for an additional text underlay. In 1897, he registered the previously published opus numbers in the United States in bilingual editions. In 1898, the first editions of the opp. 36 and 37 lieder were published in high and low registers, each with a bilingual text. By this means, Spitzweg increased fourfold the sales opportunities for the lieder – which is likely to have significantly contributed to their dissemination. 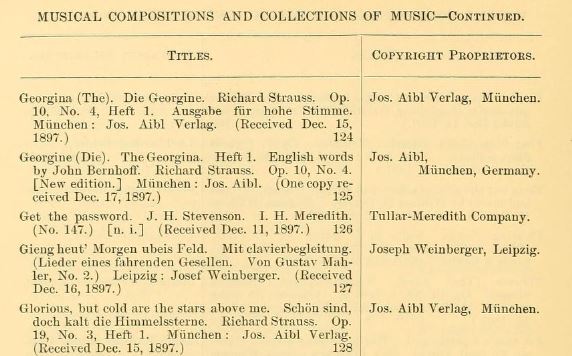 In terms of a marketing strategy, Spitzweg’s final step in offering all of the Strauss lieder that he published in a four-volume Lieder Album in 1904 seems only logical. What was special here is that following the taste of the times, individual songs from different cycles were combined in each volume in a way that completely sidelined the original groupings. The collection taken over by Universal Edition after the sale of the Aibl publishing house was reprinted in numerous editions well into the 21st century and certainly had, as “the” Strauss lieder album, a not insignificant influence on the appreciation of the lieder as independent pieces. 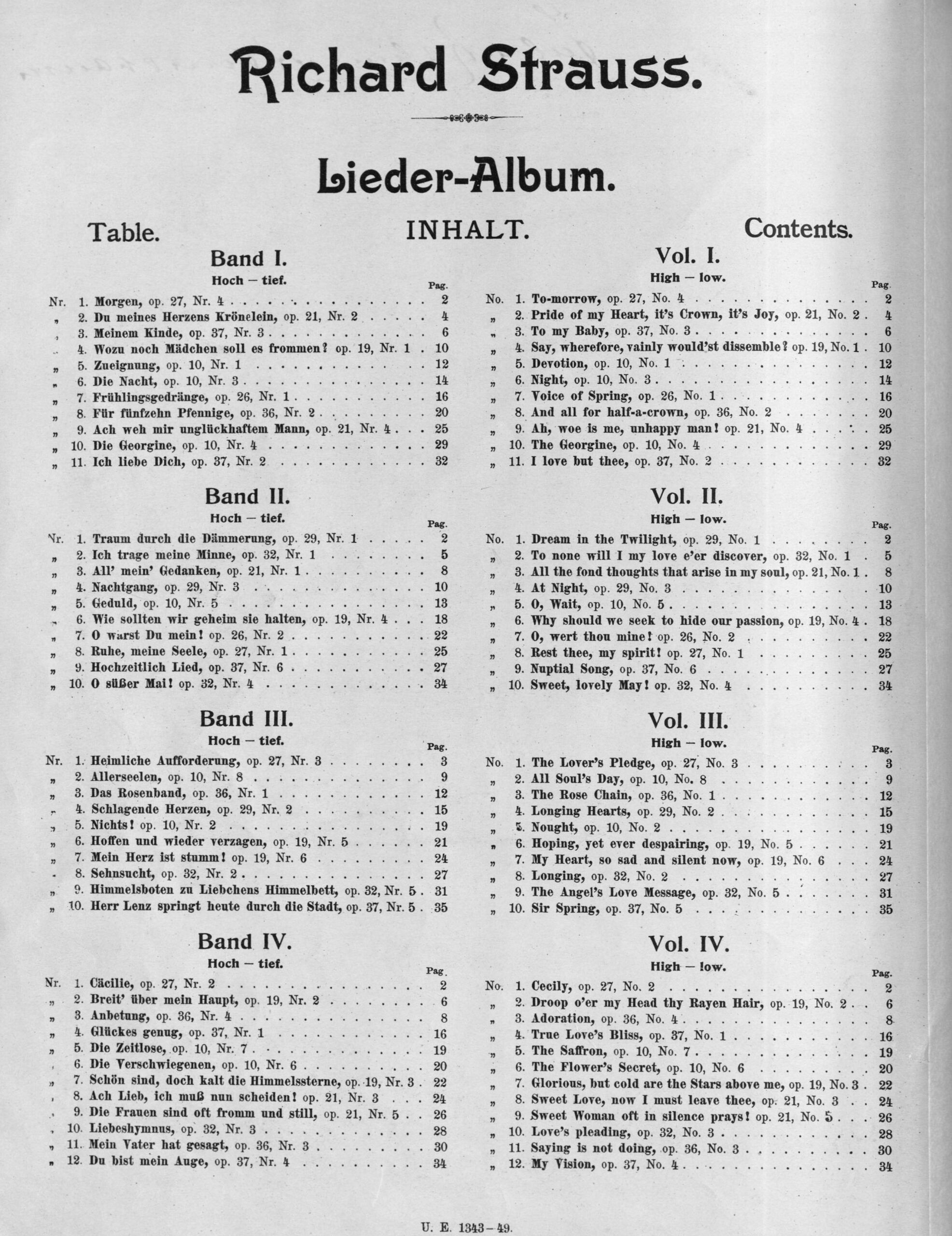 Table of contents in the Lieder Album

Wouldn’t it then be consistent for us at Henle also to present an anthology of the most popular Strauss lieder? Yes and no: This would be legitimised by the historical performance and edition practice, and Henle, after all, also has volumes of the most popular works selected from the almost inexhaustible fund of sonatas by a Clementi or a Scarlatti. But the very essential aspect of the original work form in an Urtext edition with its dramaturgical text disposition would then no longer be comprehensible, and an appropriate appreciation of the genesis circumstances would hardly be possible. As editor, I only realized how much would escape me, when I became more intensely engaged with the Acht Gedichte op. 10 (HN 1458): From the Zueignung to be performed “with consecration” to the bittersweet farewell in Allerseelen, the varieties of unhappy love, sometimes melancholy, sometimes ironic in tone, are presented so convincingly that I would urgently wish for a performance in this succession. Perhaps our edition will indeed make a contribution to just this!