When a composer decides against publishing one of his works during his lifetime, there are usually good reasons: Either it is a youthful or study work that would be too insignificant for publication or it represents a style that has meantime been abandoned. Or it features an occasional work in the truest sense of that word, intended only for private performance. The latter applies also to Camille Saint-Saëns’ probably most popular composition, Le Carnaval des animaux (composed in 1886, posthumously published in 1922).

The genesis and performance history is too familiar to need repeating here in detail (see the preface in HN 939 or HN 9939). Saint-Saëns had apparently never considered publishing the work – a parodistic contribution that had its natural place during the carnival season within the context of private or semi-public events – whereby alongside the performances on “Mardi gras” (Shrove Tuesday), even those on “Mi-Carême” (fasting break midway between Ash Wednesday and Easter) were considered carnival performances. No. 13 Cygne (Swan) was an exception here, which the composer published as early as 1887 in an arrangement for cello and piano (the original in Carnaval is written for cello and two pianos). This exception was, though, comprehensible, insofar as here the satirical aspect entirely favours the string instrument’s cantabile – a serious music piece that fits into the rest of the Carnaval’s animal-world pieces only through its reference to the swan.

The “Grande Fantaisie zoologique”, as Saint-Saëns subtitled his composition, had been performed as a whole at least ten times in Paris by 1894 and always with resounding success. Its growing popularity was not, however, in the composer’s interest; he was gearing his ambition towards his chamber and symphonic works, on the one hand, and towards his stage works, on the other. As a result, he prohibited any further public performances and never even released the work for publication. In his will of 1911, though, he did at least give his usual publishing house Durand permission to publish Le Carnaval des animaux posthumously, which was then done in March 1922, only three months after his death. 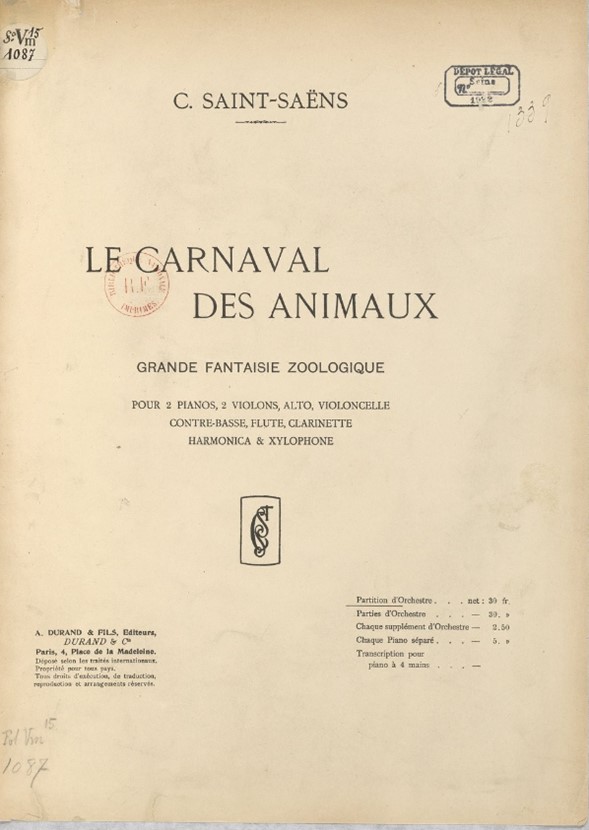 Given this source situation, the autograph written in 1886 appears at first glance to be the only source for an Urtext edition, since indeed the first edition appeared posthumously without the composer’s participation. Nevertheless, the autograph does not contain any of the usual publishing-house or engraver’s entries indicating its function as an engraver’s model; comparing the two sources furthermore shows a whole series of small differences. Suggested, in this respect, is the idea that the now-lost parts, which Saint-Saëns had had written out for the première, may have played a role in the edition, either directly or indirectly. 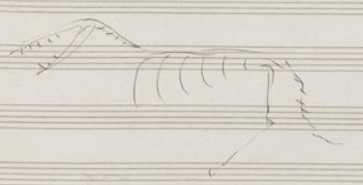 The most striking difference pertains to no. 12 Fossiles (Fossils). This number is a special case in that equally worked up within the smallest space are six different melodies, four popular French folk songs, together with the Cavatine from Rossini’s Barbier von Sevilla and a rondo-like recurring theme from his own symphonic poem Danse macabre. But why is the number called Fossiles? It has to do with melodies – coming from folk or art music –, which, as Michael Stegemann put it, ‘have been played a thousand times, played to death and finally petrified into fossils of musical art’. This is probably also supposed to be expressed by the small drawing that Saint-Saëns left behind on the title page of no. 12: a skeleton of a primeval animal, which, like the framework of the melodies presented, has petrified into a fossil.

In the second section (measures 17–25), Saint-Saëns works out the lied J’ai du bon tabac dans ma tabatière, very popular since the 18th century, and to this day hardly ever absent from a collection of French folksongs or children’s lieder.

Without question: everyone in France knew and still knows this melody today – ad nauseam, so to speak. Saint-Saëns gives the fossil new life through two interventions: He diversifies the melody polyphonically by counter subjects (inverting the concise series of eighth-notes), as well as harmonically by modulating to neighbouring keys. Measure 24 functions shortly before the end of the section as a return from c minor to the tonic B-flat major, appearing in measure 25 as the conclusion.

In the first edition, the violin 1 and viola notes are changed in such a way as to rule out copying or engraving errors. In the first half of the measure in the print, violin 1 has c2–d2–e flat2–c2 instead of the original e flat2–d2–c2–e flat2. The reason for the changes seems to be avoiding parallel octaves with the cello and double bass. In the viola, the accent on the beat 1+ in the Alla breve-metre and the tie in the autograph are elements that have no analogy in this section and have been changed in the first edition in favour of a series of eighth-notes, similar to previous measures.

The two differences raise several questions: Do the variants in violin 1 come from the lost parts, and were they possibly, deliberately changed by players during performances?  Perhaps, even with Saint-Saëns’ endorsement, as he is known to have participated as a pianist in at least the first four performances? Or is it an intervention by the editor of the posthumous first edition, who is making the changes based on his musical expertise?

To put it in a nutshell: How is the fossil J’ai du bon tabac supposed to behave here?

Various solutions can be found in available editions: Eulenburg, for example, gives the first-edition version, Breitkopf, that of the autograph. There is no unequivocal answer, but there are some indications that the autograph’s reading is not an oversight but depicts a deliberate breakup of the actually-expected proceedings. In the end, the accent introduces a new element into the polyphonic diversification, and the octave doubling could indicate – as a sly wink from the excellent music-history authority that Saint-Saëns undoubtedly was – circumstantial evidence of an antiquated music that has only survived in folk music, that is, to be interpreted as a fossil way of making music. Therefore, Ernst-Günter Heinemann, editor of the Henle editions HN 939 (parts) and HN 9939 (study edition), retained the autograph version in the main text, documenting, of course, the differences in the comments.

One Response to »How do fossils behave? On a passage in Saint-Saëns’ Carnaval des animaux«