Posted on September 13, 2021 by Wolf-Dieter Seiffert

Franz Schubert‘s piano music is almost an infinitely magical wonderland. As is well known, he can modulate amazingly to the most harmonically remote regions within a minimum amount of space – and back again. So also in the much-played Impromptu in A-flat major D 935, No. 2. Its middle section in D-flat major has always been one of my absolute favourite Schubert passages. A pleasurable shiver runs down my spine every time the gentle triplet section begins with its hidden melody:

Almost unnoticed, Schubert leads us here from the previously well-established key, D-flat major, into an impassioned expanse with a key signature devoid of accidentals, in which then nothing more than an A major (!) triad sweeps up and down over seven measures. A major in D-flat major? – not exactly friendly neighbouring keys. But, how to get back again to D-flat major?

No problem at all for Schubert. To do this, he applies his magic wand for a brief moment: Continuing the triplets’ rising and falling seemingly innocuously, he reaches the minor parallel f-sharp minor and the subsequent enharmonic equivalent and with it the harmonic reinterpretation (A major = I | f-sharp minor = VI ≙ g-flat minor = IV of d-flat minor /major | A flatD flat = 5I | A flat7 = V7 | D flat = I) back home to the cosy D-flat major. 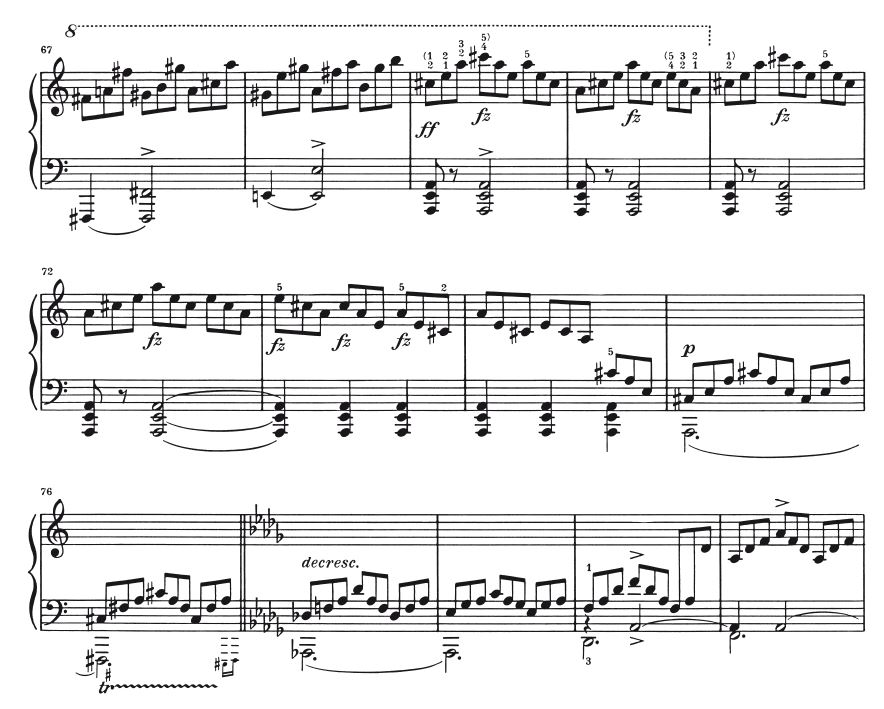 The trill in the bass on the very low F-sharp (bass progression: A1 – F sharp1 – A flat1 – D flat) seems to me in the process particularly ingenious. This F-sharp trill derived from A major “moderates” the wonderful harmonic change, so to speak; its deep murmuring also momentarily distracts our attention a bit from the actual “breathtaking” happening.

Here, dear reader, is a question for you about this trill: Should it be trilled from the upper whole tone (G sharp) or from the slightly more “dangerous” semitone G? The question does, of course, have a philological background. For, in Schubert’s manuscript there is clearly a G – no # at the trill:

One can, of course, argue that Schubert most likely just simply forgot to write the “obvious” # above the tr sign. Diabelli, as editor of the posthumous first edition “Op. 142” (published in 1839, dedicated to Franz Liszt), evidently saw it and clarified it very pragmatically by adding a small engraved G sharp before the trill:

All editions accessible to me, whether Urtext or not, have since added the # to the trill’s upper note (= G sharp). BUT: all previous Henle Urtext editions haven’t, because for ages we followed the autograph reading (G). Now, though, following the suggestion of a pianist, then discussing this in detail within our editorial department, we have decided to add the first-edition’s “natural” sounding # in our edition.

I’ll admit that you can barely hear the difference between G and G sharp. At best, only in a direct comparison on the piano. Even in various recordings by the great pianists (for example, Radu Lupu in his wonderfully slow recording, where you hardly notice the bass), I can often not be sure whether the piano is trilling with G or G sharp. (Paul Lewis, in the above recording link, plays G sharp.)

What is your opinion and why? I would be very happy to continue our Henle in-house discussion a bit further with you. Many thanks!

PS: About another, even more famous bass trill in Schubert’s piano music, none other than András Schiff once stated something well worth reading.