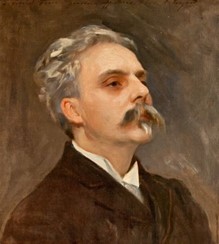 Fauré is known for his refined tonal language, with the crucial parameters of melody, rhythm and harmony appearing extremely nuanced in his compositions. Avoided, conversely, are garish effects, and contrasts are variously shaded. This often leads to subtle defamiliarization even culminating in ambivalence, especially in the case of harmony, alternating amongst diatonicism, chromaticism and modal reminiscences.

Examples of this can be found in numerous passages in the 1st Piano Quartet in c-minor op. 15, composed in 1876–83. Thus, for instance in the finale, where Fauré modulates in transition measures 144 to 145 from F7 to E7, though not raising the e-flat octave in the piano bass to e, but maintaining it (and even marking it in the autograph with its own flat accidental):

The iridescent sound of the dissonance between e flat (piano bass) and e (piano descant, together with the viola, notated there as f flat) can be attributed at least to the organ-point tradition where dissonant harmonies can freely develop over a pedal tone.

Catching the eye, on the other hand, are two other passages in opus 15 where cross relations with the period’s mainstream harmony are no longer explicable, and for which, alas, we cannot go back to the composer’s own notation – as the autograph is extant only for the finale.

1) Appearing in the first movement, measures 109 and 111 (its literal repetition) within the context of an f-sharp-minor harmony, is the melodic suspension b sharp (right hand’s 3rd note), not to be resolved to c sharp until the following measure. This b sharp is repeated twice in the same measure (6th and 11th notes), although the 7th note is a b an octave higher, thus creating a subtle b sharp/b friction:

Whereas the 11th-note’s repeat of b sharp would probably not be disputed, it would seem at first glance that a natural sign may have inadvertently gone missing before the 6th note, suggesting that the passage ought to be corrected as follows: 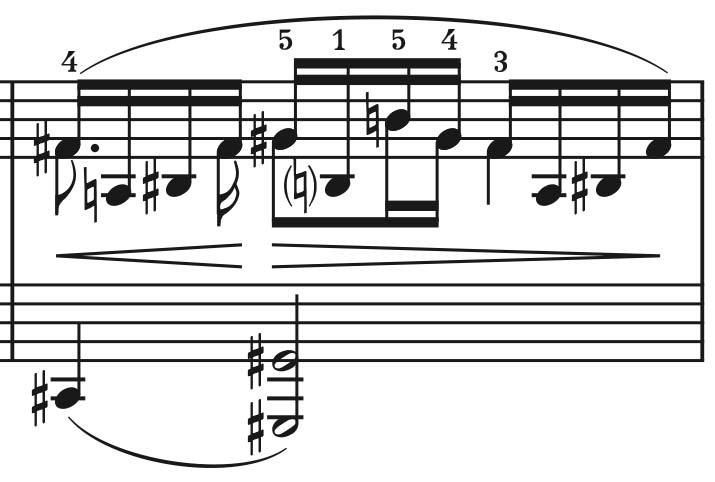 Supporting such a correction is a no longer accessible source cited in the Eulenburg edition of 1979 edited by Robert Orledge: a printed exemplar that Fauré himself is said to have used for performances, in which precisely for these two first-movement measures he is supposed to have handwritten a natural sign before the respective 6th note (though without adding the # before the respective 11th note).

But is the matter really so simple? First of all, we wonder why the correction, assuming its actual authenticity, was not executed in one of the numerous new prints issued during Fauré’s lifetime. Secondly, there would have to have been a double oversight: his forgetting of both the natural sign before the 6th note and the # before the 11th note. Couldn’t it, though, also be possible that wanting to keep b sharp as a continuous leading tone for resolution in the subsequent measure, he thus accepted the cross relation?

2) A similar cross relation b/b flat/b in the piano bass occurs in measure 34 of the 3rd movement:

Here, too, there seems at first glance to be a clear mistake: that is, in measure 34 (2/4-metre) Fauré modulates in 8th-note steps from B via C7 to f, etc. The B-major harmony on beat 1 is, though, seriously disturbed by this b flat in the piano bass (which actually only seems to belong to the subsequent C-major-seventh chord). 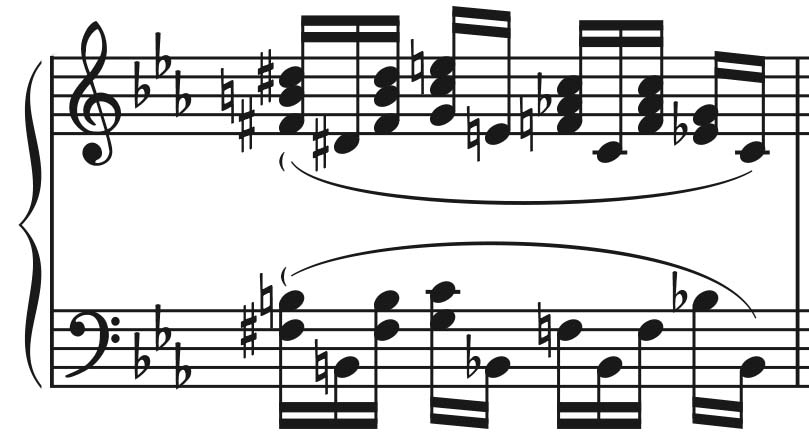 Measure 34 with B instead of B flat

Arising here, too, is the question as to why this passage was not corrected in later issues, and whether Fauré and/or the music engraver did in fact overlook two mistakes (wrong accidental before the 2nd note, missing accidental before the 5th note in the piano bass). Could it not also be true here that the strange b flat, indeed not sounding directly with b, is one of the Fauré ambivalences spicing his works?

After intensive discussion, Fabian Kolb, editor of our new edition of the 1st piano quartet, scheduled to appear early in 2022, has decided to leave the passages as in the first edition, though footnoting possible alternative readings:

One Response to »Refinement or oversight? On two passages in Fauré’s 1st Piano Quartet op. 15«