Well-disposed visitors to our various digital platforms already know that under the motto “Henle4Strings” the focus in 2022 is on the string quartet. So it’s also high time for our blog to start dealing with this topic, especially since – apart from regular reports on the progress of the major Mozart string-quartets project – the genre has not really been properly elucidated here.

To date, only one commentary on Beethoven’s string quartets, not even a single blogpost on Haydn’s 68 contributions to the genre – how can that be? Well, that’s simply because this blog usually addresses current work in the editing department. Editions of Beethoven and Haydn quartets belong in our catalogue for the most part, however, if not to the publishing house’s bedrock (reserved for piano and piano-chamber music), still to at least a rather deep layer of earth. Some of these editions originated as early as in the 1970s – when nobody had any idea of an editor’s blog that would someday allow regular reporting from the editorial workshop….

Editors of the Joseph Haydn quartets, from Georg Feder to Sonja Gerlach and Horst Walter to James Webster, as Haydn specialists and long-time contributors to the Joseph Haydn Complete Edition, would certainly have had a lot to recount about the quartets’ problematic tradition.  For one thing, not all of the quartets are extant in autographs, besides which, many of them were already circulating during Haydn’s lifetime in unauthorised copies or prints, making life very difficult for a scholarly editor. But who knows: perhaps the year 2022 will still bring an addendum in this regard? After all, there are still some weeks to go! 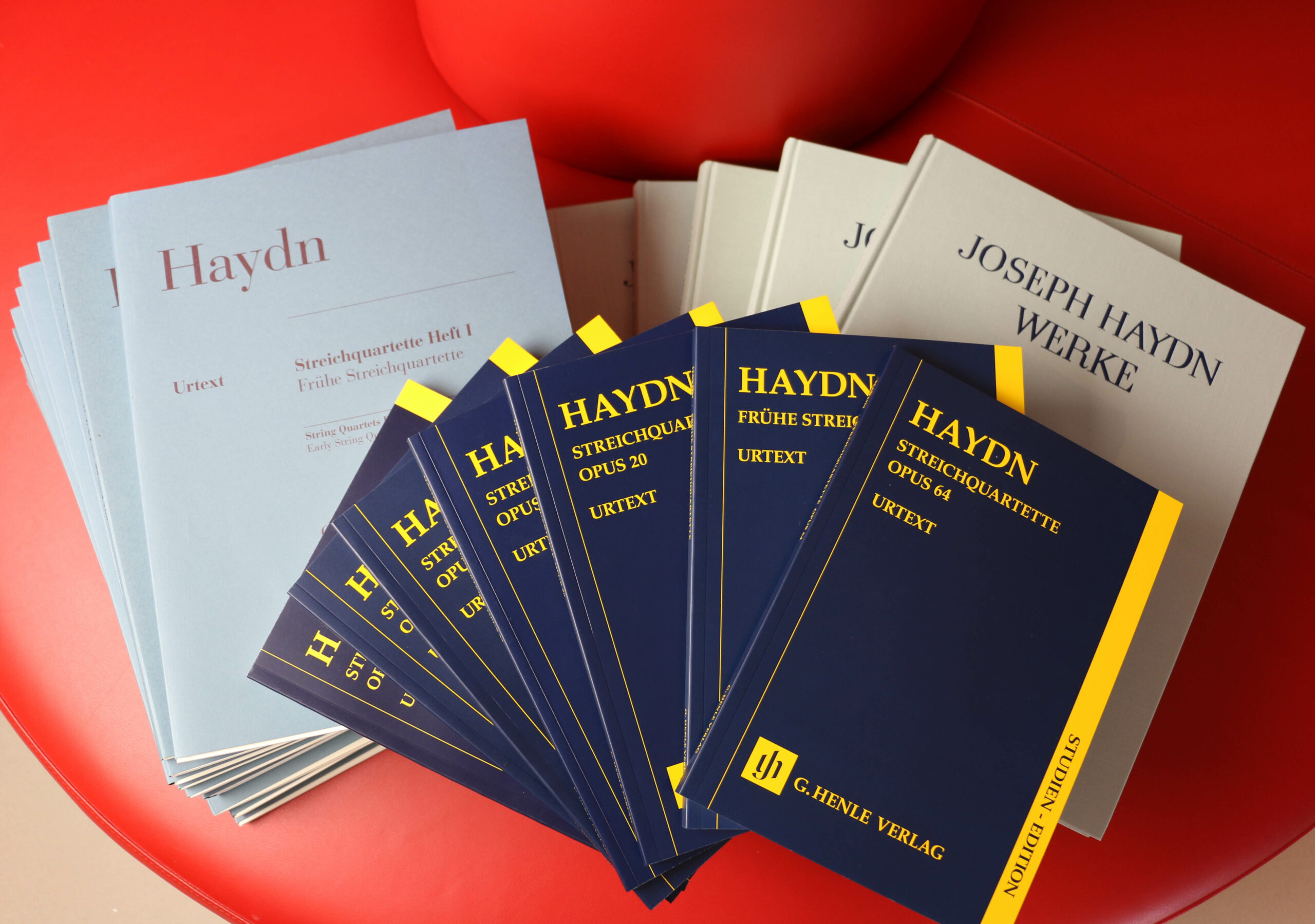 To start with the quartet topic, though, I don’t want to go into a specific question of readings, but would rather draw attention to the typical transmittal tradition and the associated editorial problems confronting us in this genre. For unlike in piano music, where the composer is usually also the work’s first interpreter and authority, with the chain of transmission from autograph to engraver’s model to first edition usually in his hands, the genesis and dissemination of chamber music without piano is sometimes more or less also influenced by others.

This process begins with the fact that four different individual parts have to be written out for a quartet’s first performance, and even the most careful copyist may overlook something or make a mistake. Since these parts are often used as engraver’s models for the parts’ first edition – and, until the 19th century, such printed parts were usually the work’s only edition published during the composer’s lifetime – such shortcomings may long go unnoticed if the autograph is no longer inspected.

The first movement of Haydn’s String Quartet op. 71 no. 1, for example, long haunted the music world in a strange hybrid form, as a change that the composer entered in the autograph was adopted in the first edition only in violin I, whilst the lower string parts remained unchanged. It was only with the work’s 1978 publication in the Joseph Haydn Complete Edition that this error was disclosed by Georg Feder and Isidor Saslav – and the definitive work form was then finally made available for practical use in the Henle Urtext edition that was based on it. 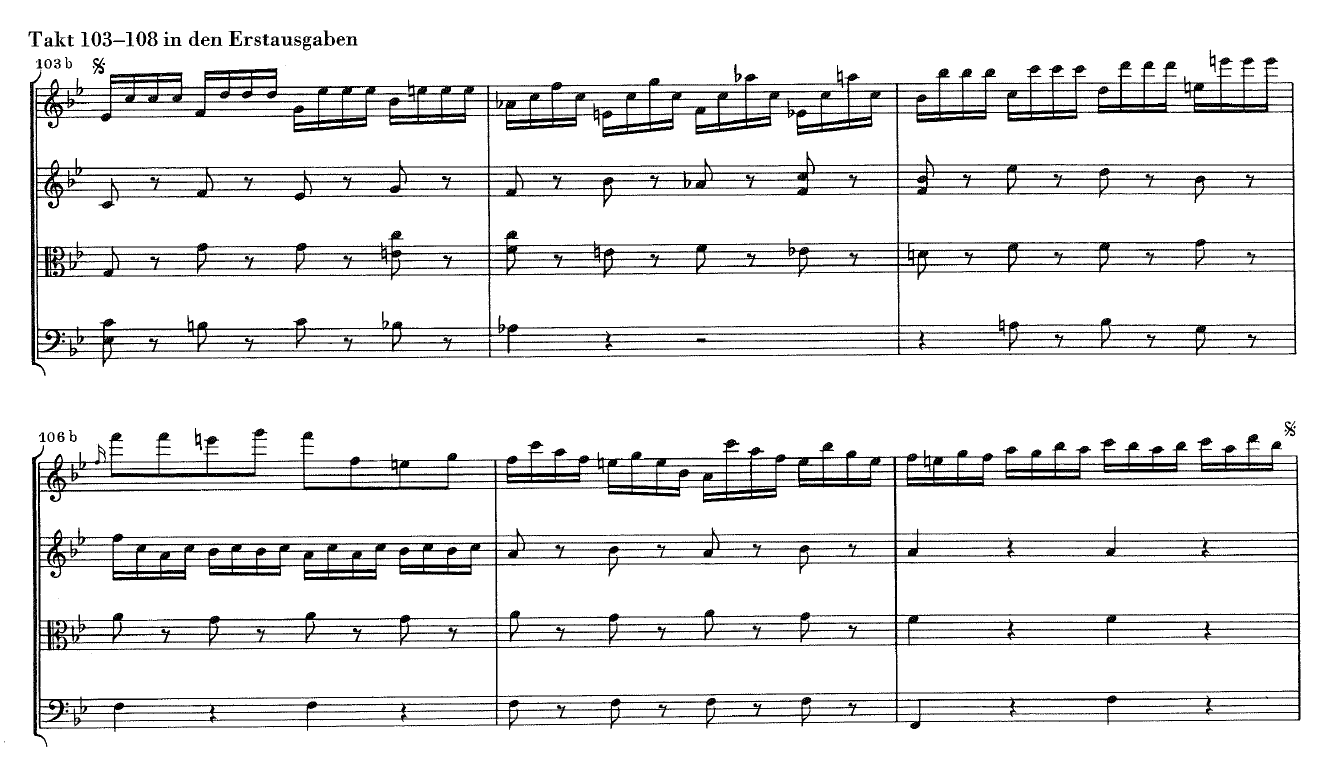 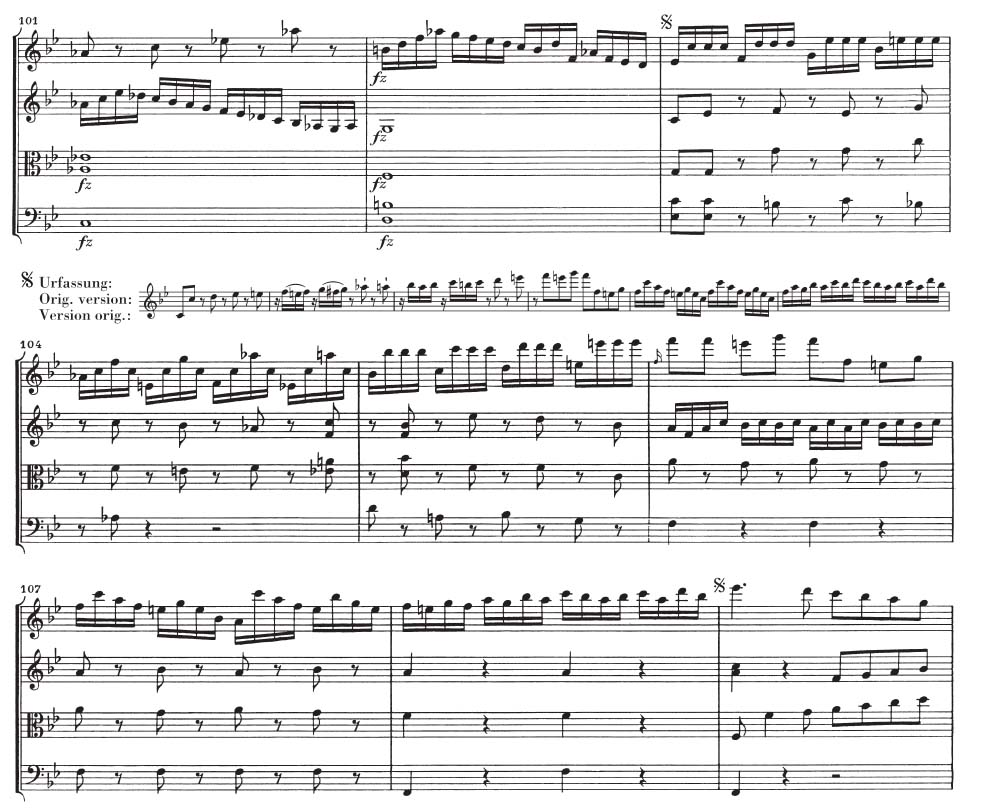 Conversely, of course, parts copied from the autograph can also contain important information –  as Wolf-Dieter Seiffert established in his edition of Mozart’s K. 421 string quartet: Here, a comparison of the first edition (published during Mozart’s lifetime) with the autograph reveals numerous differences that can only be attributed to the composer, who presumably entered them during the first performances in a now lost set of manuscript parts that then served as an engraver’s model for the first edition. That, however, Mozart did not transfer the changes back into his autograph is the reason why this source can be used only to a limited extent in the Urtext edition. The fact that this can present the editor with difficult decisions when dealing with certain rhythmic subtleties such as the “Lombardic rhythm” is another story or blogpost.

Questions of a completely different kind confronted editor Egon Voss in the edition of two late Schubert string quartets, for each of which only a single source existed: whereas existing for the “Rosamunde” Quartet D 804 is only a first parts edition, showing numerous differences amongst these four parts, the G-major Quartet D 887 is extant only in the composer’s first transcription of 1826, which was obviously lacking a final editing by the composer. In the case of the “Rosamunde”, the editorial balancing act consisted of a) editing a coherent version in the face of obviously inconsistent dynamics or articulation markings, and of b) indicating to musicians when another decision was conceivable in the music text – a matter that was already the subject of an earlier blogpost. With the G-major quartet, on the other hand, the composer’s lack of final redaction forced the editor to make numerous additional markings, for example, in the dynamics, which are often only originally notated above violin I or below the cello. Whether these markings should subsequently always be transferred to all instruments is a matter of considerable debate – based, best of all, on our Urtext edition, where such decisions, often tacitly made in earlier editions, are now also recognisable owing to their identification within parentheses. 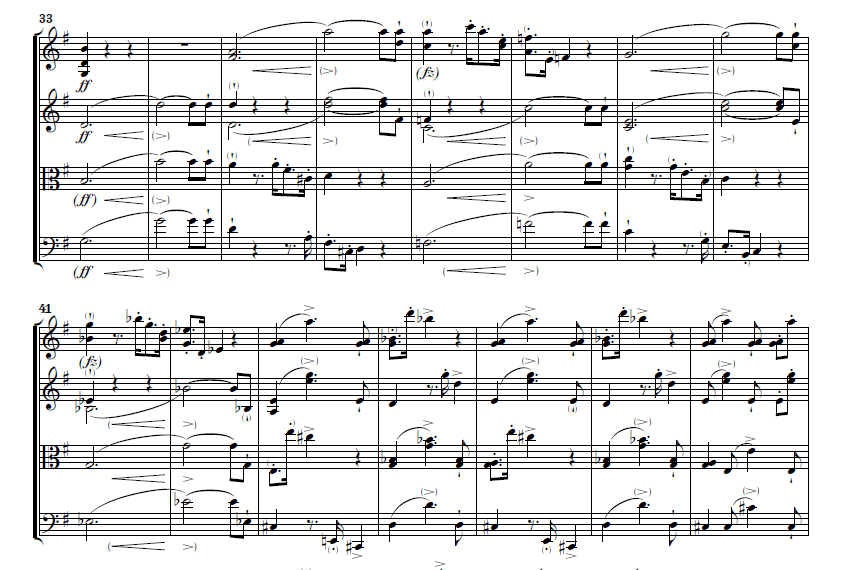 If too few sources are extant for Schubert’s quartets, in the second half of the 19th century there were often too many sources, when the printed parts were joined by a score and an arrangement for piano solo or duet. As all of them usually go directly back to the composer, these works then often exist in several authorised forms. At the same time, the evaluation of the working material changes, so that to be found in archival depths can be not only manuscript performance material and engraver’s models, but sometimes even galley proofs proofread  by the composer – not to mention the extensive composer-publisher correspondence of a Brahms, Dvořák or Smetana. Thus, the sources multiply, all of which must be carefully examined in the case of an Urtext edition before the question of all questions can be answered: which source best documents the composer’s intended form of the work?

Editor Milan Pospíšil was therefore perhaps not entirely ungrateful when, in editing Smetana’s string quartet “From My Life”, he discovered that a copy of the parts made for first performances was not recognisably authorised by Smetana and consequently had no editorial relevance. Since Smetana evidently made fundamental changes during publication preparations, such as altering the metre in the first movement, the first edition of the score is the main source for the Urtext edition. There, though, the various accentuated dynamic markings used in Smetana’s autograph, such as sf, fz, sff, sffz, rfz or rinfz. are levelled out to just a few variants. A regrettable loss of expressivity in this highly emotional work that makes such impressive use of the tonal possibilities of the four string instruments! Since this was less likely to have been a conscious decision by the composer, rather than a standardisation (that he merely tolerated) by the publisher, the editor of our Urtext edition decided to return to the autograph in this respect – thus, once again offering musicians the entire palette of tonal possibilities imagined by the composer (who was already deaf at the time of writing!). 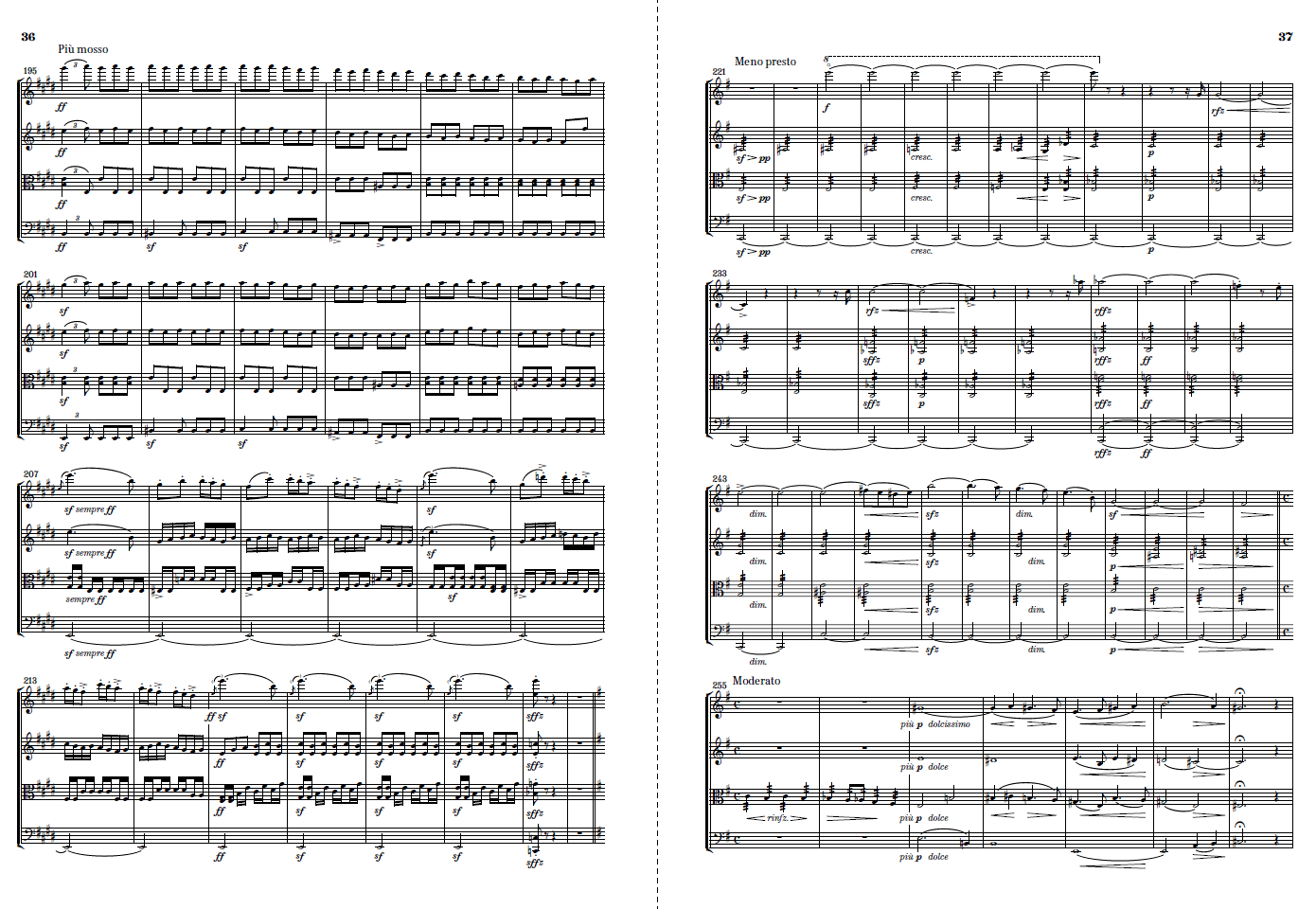 Is your curiosity piqued about our quartet editions? Then stay tuned to this blog in the coming months for the widest range of editorial issues involving the string quartet, from Beethoven to Schoenberg!