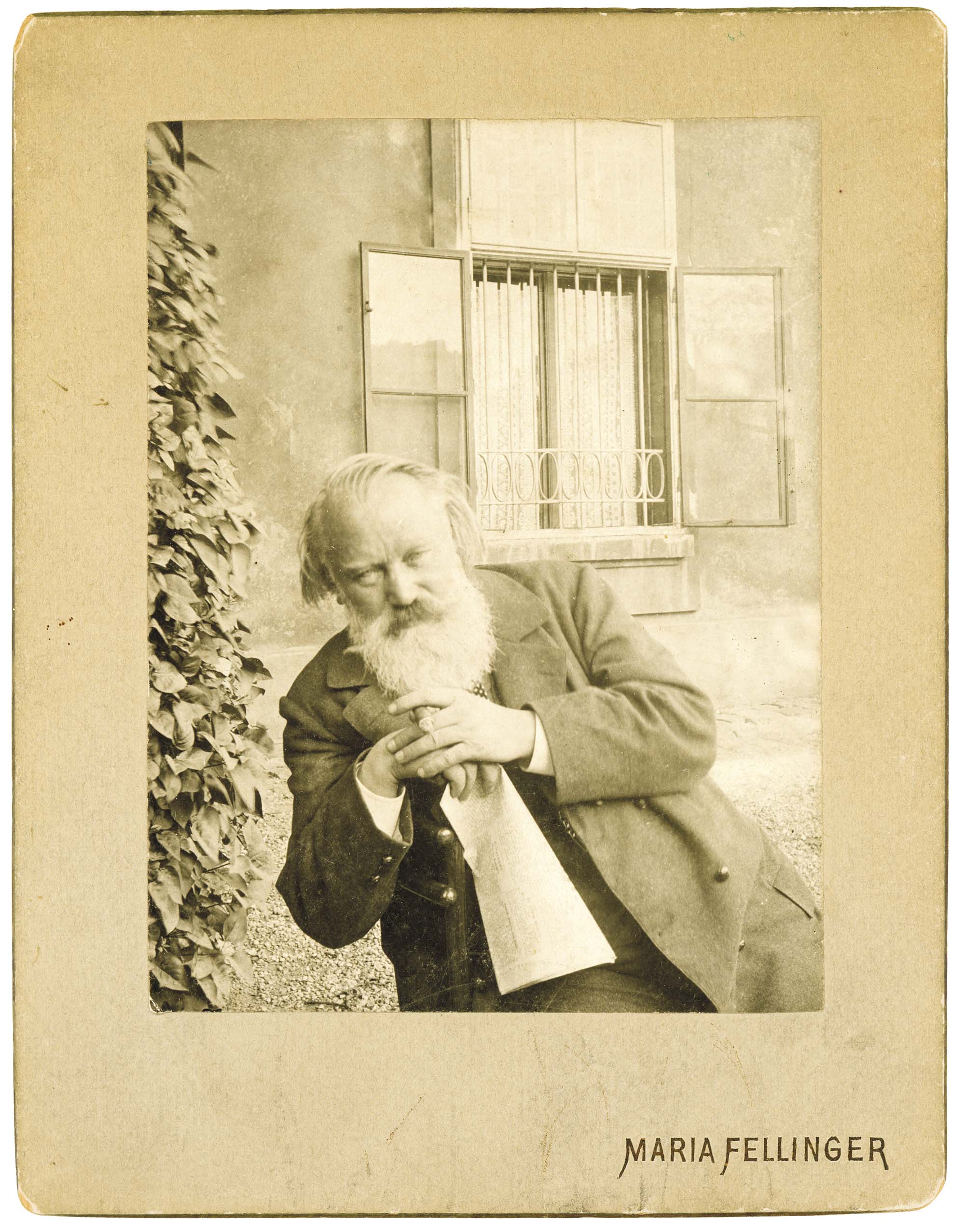 Johannes Brahms died on 3 April 1897, 125 years ago. About three quarters of a year earlier, increasingly weighed down by his fatal illness, he had finally laid down his composer’s pen. In May and June 1896, he had still been working out altogether eleven chorale preludes for organ. At that time, he wrote to Eusebius Mandyczewski that he was practicing ‘penitence and rue with small trifles’ – thus conveying an example of how flippantly he expressed himself about his own music, the more seriously, indeed, that he took it. It was not until 1902 that this collection from his estate, wafting the special aura of the ‘final work’, was published as Opus 122. The eleven chorale preludes have already appeared in both the New Brahms Complete Edition (Series IV) and in an Urtext edition based on it (HN 1368).

Immediately prior to his preoccupation with chorale preludes, Brahms had completed a cycle of four songs that in the summer of 1896 he himself had had published as his final opus. On 7 May, he had shown Max Kalbeck a ‘manuscript volume’ with four compositions based on Bible texts, whilst saying: ‘I gave this to myself today for my birthday.’ Just a few days later he sent the engraver’s model to his Berlin publisher Fritz Simrock, and by July the first edition of the Vier ernste Gesänge [Four Serious Songs] op. 121 was already available in its original version for bass and piano. Just how ‘serious’ Brahms was about this work can be seen in his emphatically offhand remarks. In May, for example, he announced the songs to the publisher with the words: ‘they are damned serious and at the same time so godless that the police could ban them – if the words were not all in the Bible.’ And when he sent the galley proofs to Mandyczewski for forwarding to Simrock in June, he called the pieces ‘godless Schnadahüpferl’. A greater contrast than that between merry ‘Schnadahüpferln’ (a certain kind of Alpine dance tune) and the four profound reflections on last things is hardly imaginable.

It was Brahms himself who meaningfully compiled the texts from various books of the Bible to set to music in Opus 121, as he had done, for example, in the Deutsches Requiem op. 45 and in the motet ‘Warum ist das Licht gegeben dem Mühseligen?’ op. 74, no. 1. Both works also dealt with the great questions of human life and death, which are now once again relentlessly taken up in the Vier ernste Gesänge: Human beings die just like ‘cattle’ and cannot know what will happen after death, so that nothing remains for them in life but to be ‘cheerful in their labour’ (No. 1). Much injustice is exerted ‘under the sun’ by the powers that be, for which there is no solace; death is therefore better than life, and even better is not to have been born (No. 2). The thought of death is bitter for both the wealthy and healthy but is comforting to the ‘hapless’ and hopeless (No. 3). Any speaking with tongues of men and angels, any knowledge, any faith, any charity and even martyrdom are worth nothing without love. ‘But now abideth faith, hope, charity, these three; but charity is the greatest of these.’ (No. 4).

To be encountered in the closing section of the final song, Brahms’s heartfelt setting of the last words of the great ‘Song of Love’ (1 Corinthians 13), is a vexingly ambiguous music notation. In measures 83–87 (figure 1), three music layers are overlapping: first of all, the singing voice in quarter notes and ordinary (duplet) eighths; secondly, the two lower voices in the piano part, whose broken chords run in eighth-note triplets; thirdly, the upper voice stemmed upwards in the piano part, notated, on the one hand, as duplets (like the singing voice and rhythmically congruent with it), and is, on the other hand (from the notehead’s vertical positioning and coincidence), incorporated into the triplet motion of the middle piano part.

In view of this notation, the question arises as to how Brahms may have conceived of the three layers in their heard relationship together, that is, how the passage should be executed in keeping with the composer’s meaning. This applies, above all, to the singing voice and the upper piano part: should they be sounding as rhythmically coincident, as a clear duet in sixths and thirds, or are minimal shifts between duplet and triplet eighth notes – a ‘two-against-three’ execution – intended?

No oral or written statement by Brahms about this is extant, nor do contemporaries’ recollections of Brahms’s own performance of the work on the piano address this aspect. Can a look at the available music sources help to answer the question of its intended performance?

Three separate editions of the Vier ernste Gesänge appeared during the composer’s lifetime. After the original bass version of July 1896, Brahms published two further editions for alto/baritone and soprano/tenor in December, in order to make this lieder opus more accessible to singers with other vocal ranges. Comparing the passage in question in the three editions leads to the surprising finding that relative to each other, the voices are engraved differently, suggesting also different ways of performing it:

The edition for bass (figure 1), as already described, notates the eighth notes of the vocal part as duplets, but those of the upper piano part as triplets, thus suggesting that the eighth notes in question should not coincide at this point, and thus that heard in places is the shifting of the two voices.

The edition for alto or baritone (figure 2) retains the original keys whilst shifting the voice up an octave into treble clef. Here, too, the voice renders the eighth notes as duplets, but the upper piano part is now partly adapted to it in the positioning of the eighth notes, which can be most clearly seen in the eighth note advanced at the end of the second bar. From this notation, therefore, we can at least begin to derive the intention of a duplet performance of the duet.

The edition for soprano or tenor (figure 3) brings transposed versions of all four songs, so that the section in question is heard in G major instead of E-flat major. Here, not only are the eighth notes of the piano’s upper part (as in the edition for bass) placed in triplet form, but also the eighth notes of the singing part. Since all the notes of the two voices are thus placed exactly one above the other, the notation indicates even more clearly the intention of an unadulterated duet. In contrast to the alto/baritone edition, however, the impression given here is that it is not the upper piano part but the singing voice that has to ensure the exact coincidence through rhythmic flexibility. A performance in this manner thus leads to a duet that is triplet-like at least in the second half of each of the three middle bars.

Therefore, the three printed editions, all of them demonstrably prepared and proofread by Brahms himself, do not provide a clear answer to the question of the composer’s desired execution. Do the manuscript sources provide a clearer picture?

Two authentic manuscripts of the Vier ernste Gesänge are extant: the engraver’s model of the original version for bass, written by a copyist and revised by Brahms (Brahms-Institut at the Musikhochschule Lübeck) and an autograph that was not, however, the direct model for that copy (Archives of the Gesellschaft der Musikfreunde in Vienna). In both the autograph (figure 4) and the copy (figure 5), the eighth notes of both voices of the piano part’s right hand are exactly above each other, as was the case in the editions for bass (figure 1) and for soprano/tenor (figure 3). The relationship between the singing voice and the upper piano part is less precisely fixed, but both manuscripts probably convey the intention of a vertically coinciding rather than a deliberately offset placement of the notes in question. The finding in the manuscript sources thus corresponds quite closely with the notation in the soprano/tenor edition (figure 3).

Is the question thus settled? At the beginning of the final section, did Brahms wish for a swinging duet in triplets of singing voice and upper piano part in rhythmic harmony with the remaining triplet piano part? Or was he thinking of a duet in duplets over a triplet accompaniment, in the sense of a repetition of the earlier measures 48–52 (figure 6), but now increased to two voices? Or did he have in mind a deliberately imprecise conjunction of the two voices – possibly in order to cast a slight doubt on the humane message of the great ‘Song of Love’?

Based on these observations and considerations, it was interesting to listen to existing recordings of Opus 121, no. 4, for their respective interpretations of the passage. Consulted with the help of YouTube and Naxos Music Library could be a total of 45 recordings, made between 1936 and 2020, most of them originally released on records or CD. The listening comparison revealed that all three of the performance variants described have indeed been adopted in performance practice. An example of each of these may serve as an auditory illustration:

The second of these three variants is encountered far more often than the other two and can without doubt be regarded as the traditional interpretation of this passage. Rightly or wrongly? The blog readers are invited to make their own listening discoveries and form their own opinions about Brahms’s ostensibly intended performance of the passage.

This entry was posted in Brahms, Johannes, rhythm and tagged Brahms. Bookmark the permalink.