Our blog has also already devoted two posts to this topic, with examples of the broad spectrum of our string-quartet editions: Whereas Annette Oppermann focussed on this genre’s Viennese “forefathers” – Haydn/Mozart/Beethoven, Peter Jost reported on Arnold Schoenberg’s 2nd string quartet, a foundational document of the musical “Modern”.

Schoenberg’s quartet is not in this respect a lone outlier – we have recently published important new editions particularly from the 20th-century period. The most impressive of these is certainly the latest volume of the Béla Bartók Complete Edition with his 6 string quartets, exemplarily edited by the “Bartók pope” László Somfai (HN 6206). Our practical editions of individual parts are already underway – more details from my colleague Annette Oppermann will soon be channelled here…. 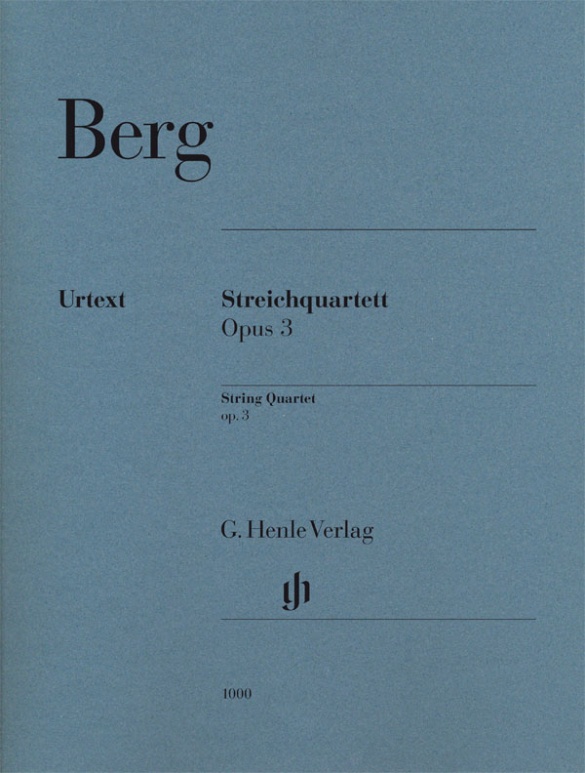 Representing the so-called Second Viennese School in our catalogue are not only quartets by Arnold Schoenberg: we have also presented a new edition of Alban Berg’s seminal String Quartet op. 3 (HN 1000). In view of this work’s protracted genesis, an examination of the extant sources and critical edition was especially rewarding: composed in 1910 and premiered in 1911, the quartet did not appear in print until 1920, though Berg revised it again as early as 1925. The individual parts additionally led a “life of their own” relative to the score, showing countless small differences from it. These circumstances gave rise to numerous difficulties for the edition, described in detail by our editor Ullrich Scheideler in the edition’s preface and comments section.

A particular challenge from a practical point of view was the arrangement of the individual parts of the Berg string quartet: the first edition already contained not only numerous cue notes for orientation, but entire cue-note systems paralleling the main part: 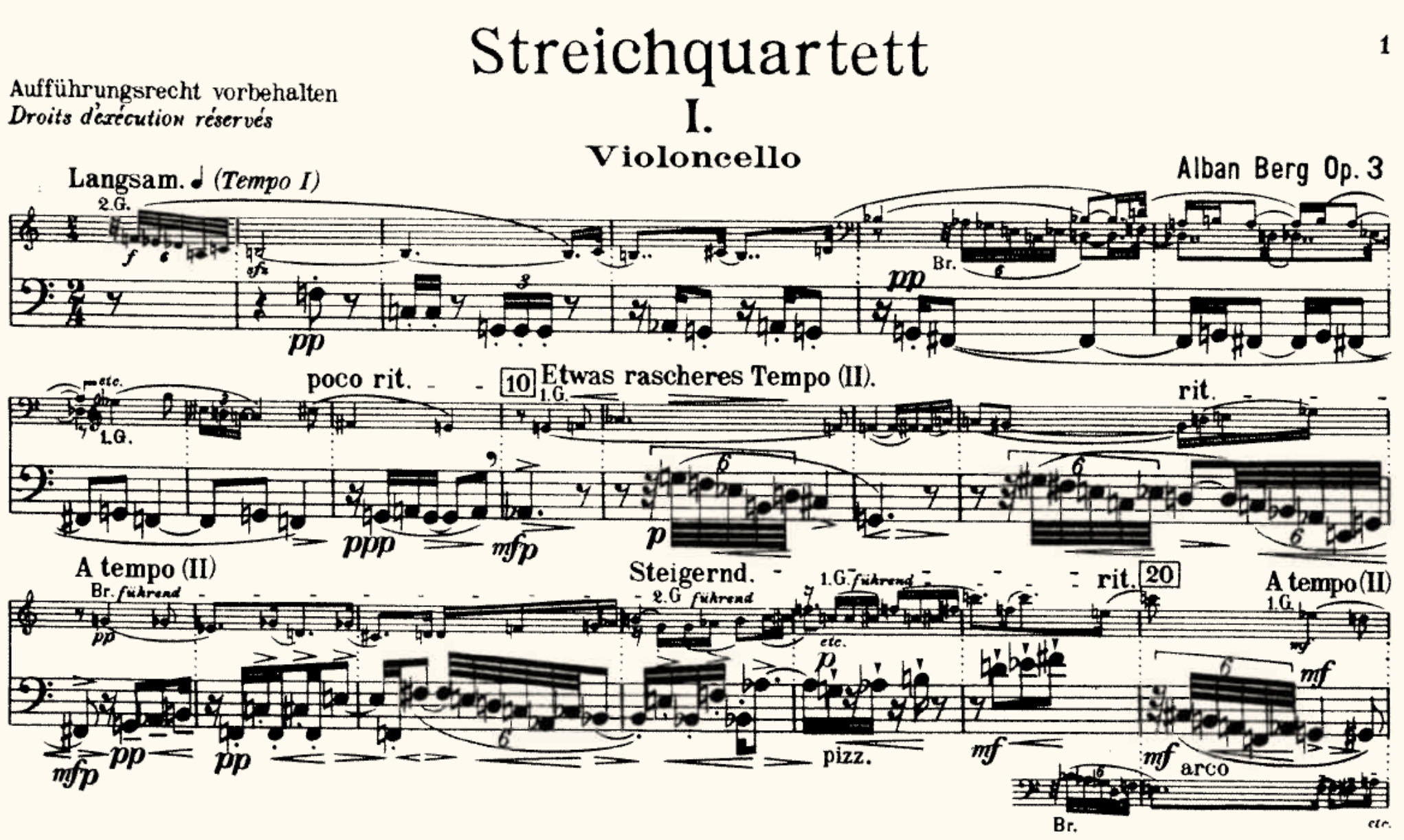 We decided to go a step further and structure the parts as real playing scores, so that each player always sees the notes of the other players and thus the whole musical context: 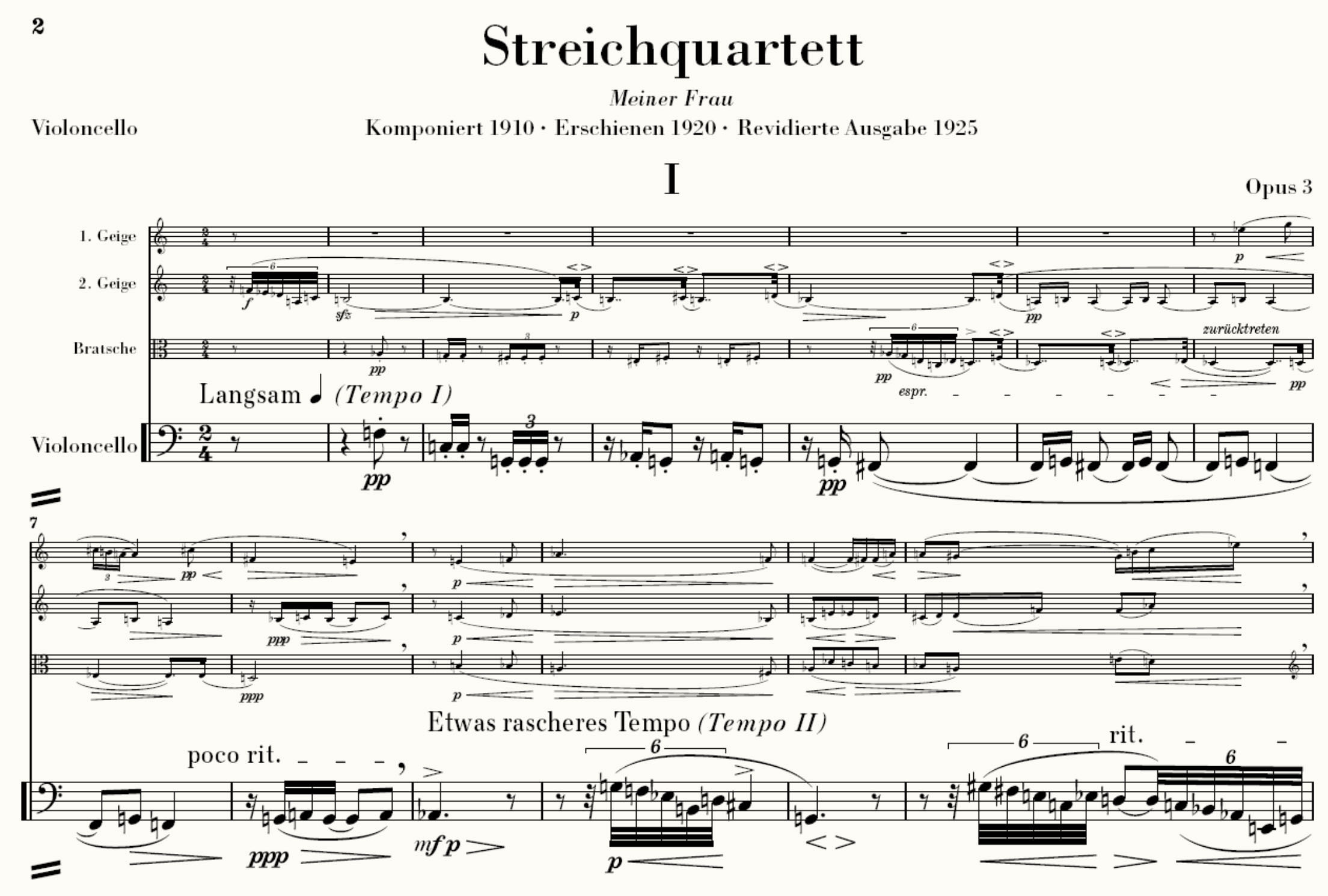 With this extremely complex composition, confronting performers even today with maximum difficulties, this form of presentation is, hopefully, a small help. Thanks to a particularly large paper format (25.5×32.5 cm) and numerous fold-out pages, the part’s good legibility and convenient page turns are nevertheless guaranteed – this video also gives a brief insight into this edition:

A string quartet of hardly lesser importance was penned by Alexander Zemlinsky, a composer whose stature has fortunately become increasingly recognised in recent years. Whilst he does not belong as a composer directly to the Second Viennese School, he was closely connected with it both personally and musically, as the teacher (and brother-in-law) of Arnold Schoenberg, whose works he frequently conducted.

Zemlinsky’s perhaps most ambitious and experimental work is his 2nd String Quartet Opus 15 (HN 1272). He composed it in the years 1913–15, thus within the direct chronological milieu of the above-mentioned quartets by Berg (1910) and Schoenberg (1907/08) that he certainly regarded as models and benchmarks.

Although Zemlinsky never took the radical step towards dodecaphony, he often goes to the limits and beyond of tonality, especially with his 2nd quartet (which no longer has a key signature and is composed in one movement) – just listen to the opening here in the reference recording by the LaSalle Quartet:

Our new edition of the 2nd quartet, generously supported by the Alexander Zemlinsky Fund at the Gesellschaft der Musikfreunde in Vienna, was able to correct many of the first-edition’s shortcomings: the dedication to Arnold Schoenberg, for example, was forgotten (!), not to mention that since the score was published four years before the individual parts, many additions and corrections that Zemlinsky had meantime made to the parts material were missing. Our edition also contains the helpful metronome markings that Zemlinsky imparted to his friend Anton Webern in a letter, but which were also missing from the first edition. We’re not stopping, however, with just this one quartet, but already planning in the near future for the edition of his 3rd String Quartet op. 19.

And finally, to clear up the conundrum at the beginning of our post: the contemporary string quartet in our catalogue comes from no less than Evgeny Kissin (HN 1183); and George Gershwin actually composed a “Lullaby” for string quartet (HN 1224).

If your curiosity has perhaps by now been piqued, why not explore our rich quartet repertoire: from facsimiles to slipcases with study editions of all the Beethoven quartets, it’s all here!

One Response to »From the First to the Second Vienna School: 20th-century string quartets in the Henle catalogue«