Posted on September 19, 2022 by Annette Oppermann 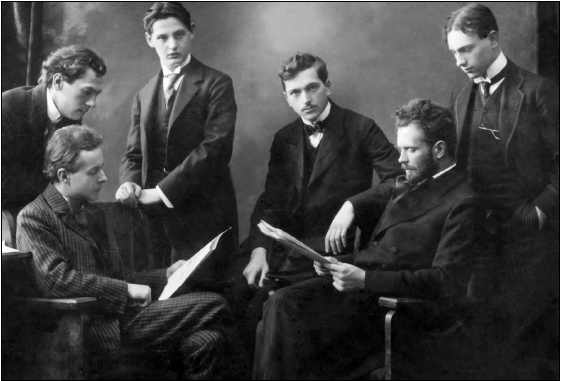 The Béla Bartók Complete Critical Edition that since 2017 the publisher G. Henle has been publishing jointly with the Hungarian Editio Musica Budapest, has produced an impressive seven volumes in its first five years. From the Works for Piano 1914–1920 to the large pedagogical cycles For Children and Mikrokosmos to a weighty volume of Choral Works and the famous Concerto for Orchestra, these volumes already cover the most diverse areas of Bartók’s oeuvre – though still lacking the chamber music. All the more fitting then that the volume with the String Quartets Nos. 1–6 should appear this spring and hence just in time for the string-quartet year at Henle. It was edited by none other than László Somfai – founder of the Complete Edition and the most profound authority on Bartók’s oeuvre – in collaboration with Zsombor Németh, a Bartók scholar of the younger generation. To mark the publication, the two have kindly granted us an interview.

Annette Oppermann (AO): Dear Prof. Somfai, Bartók’s six String Quartets were written over a period of 30 years and thus cover a very long portion of his (artistic) life. In a way they can be seen as a mirror of Bartók’s artistic development. How about you as a – not to say, “the” – Bartók scholar: When did you first encounter the quartets? How did you come to start work on their sources and edition? 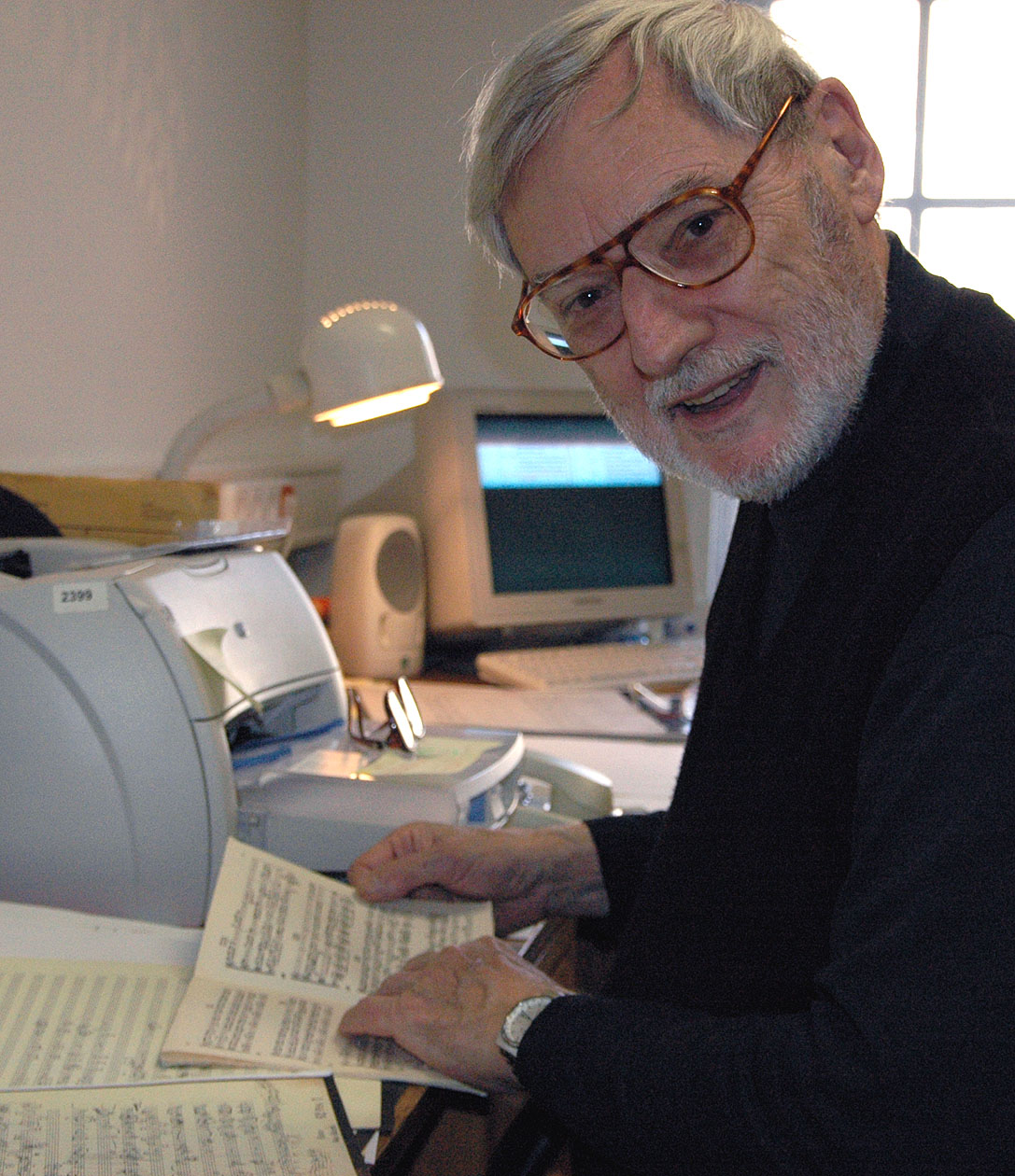 László Somfai (LS): I don’t remember the exact date, but already in my student years in the mid-1950s at the Budapest Liszt Academy of Music I was eager to become acquainted with all the six quartets of Bartók. At that time due to political considerations, in the Hungarian capital the Tátrai Quartet were allowed to publicly perform mostly the First and the Sixth (and occasionally the Second). Nevertheless, in the library I was also able to access the more “modern” middle quartets.

Then, things started to change; live concerts in Budapest of two famous ensembles from the USA, the Juilliard String Quartet (with Robert Mann) and the Hungarian String Quartet (under Zoltán Székely who had been a personal friend of Béla Bartók’s), opened new vistas for me, too. I realised that the six Bartók, probably even more than the four Schoenberg, are equal to the Beethoven quartets and (together with Berg’s Lyric Suite) represent new vistas in this highly esteemed chamber-music genre. Working in the Bartók Archives from 1963, I was simply happy to have access to the sources of these masterworks, and considered it from the outset my goal to start a Bartók critical edition, with the string quartet volume amongst the first and most desired. 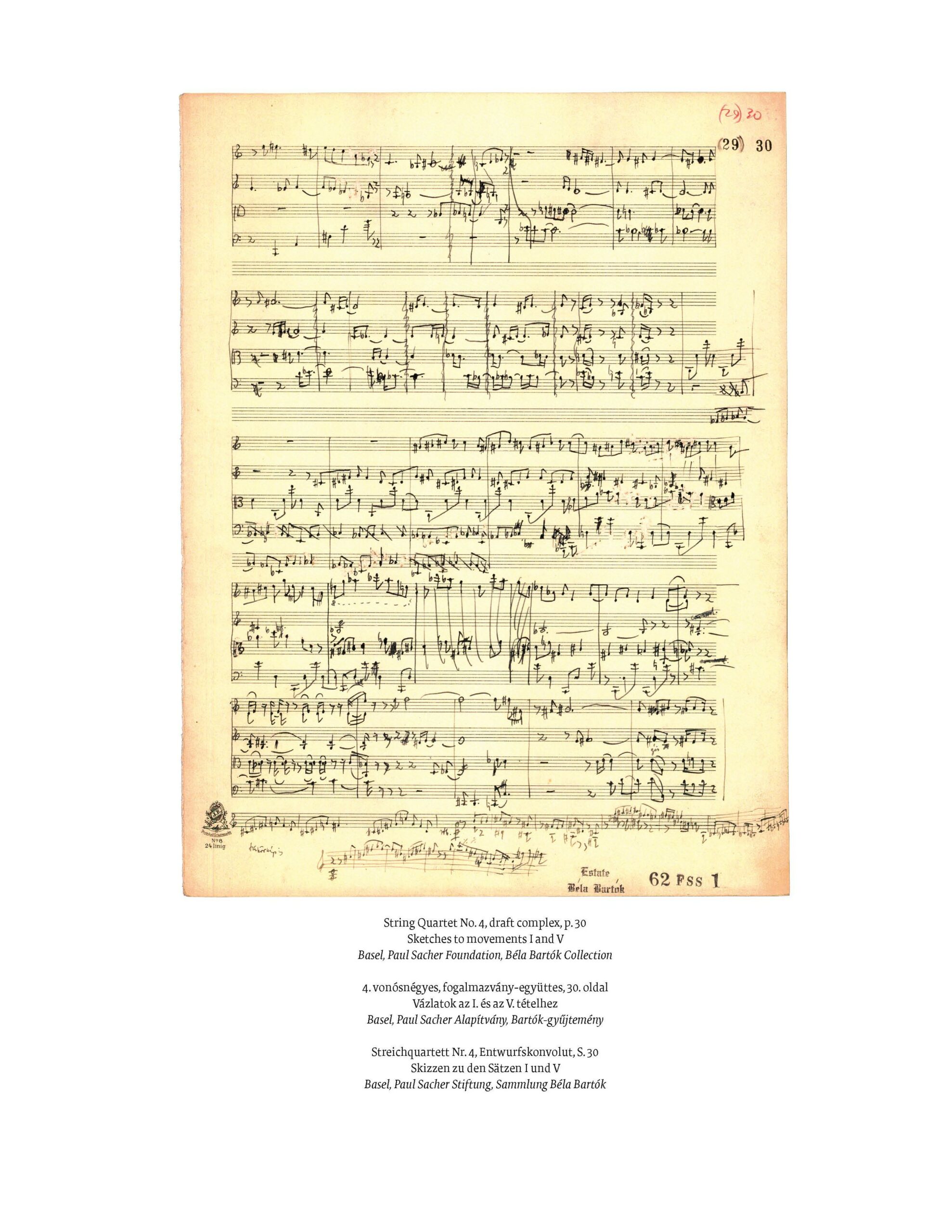 AO: The critical edition of the quartets in the Béla Bártok Complete Critical Edition (BBCCE) is based on many different sources: You examined not only sketches, autographs, revised manuscripts, first and revised editions, etc., but also such secondary sources as letters to friends, lists with additional information for musicians or error lists for the publisher – and this resulted not only in much valuable information being given in the introductory chapters of the BBCCE volume (and even more in the Critical Report that will be published as a separate volume soon), but also in footnotes to the music text. What were the crucial problems in editing the string quartets? What can musicians or scholars learn from the footnotes in the score?

LS: There are different styles in critical editions of music. I prefer those – and Zsombor Németh, my co-editor, former pupil, also a violinist, shares these views – in which the editor gives the crucial information, possible variants, necessary performing advice in footnotes directly on the page of the score. Because in the case of Bartók’s quartets, there are often equally authentic variant forms (sometimes from different periods or for different musicians), and performers today have the right to make their own choices. 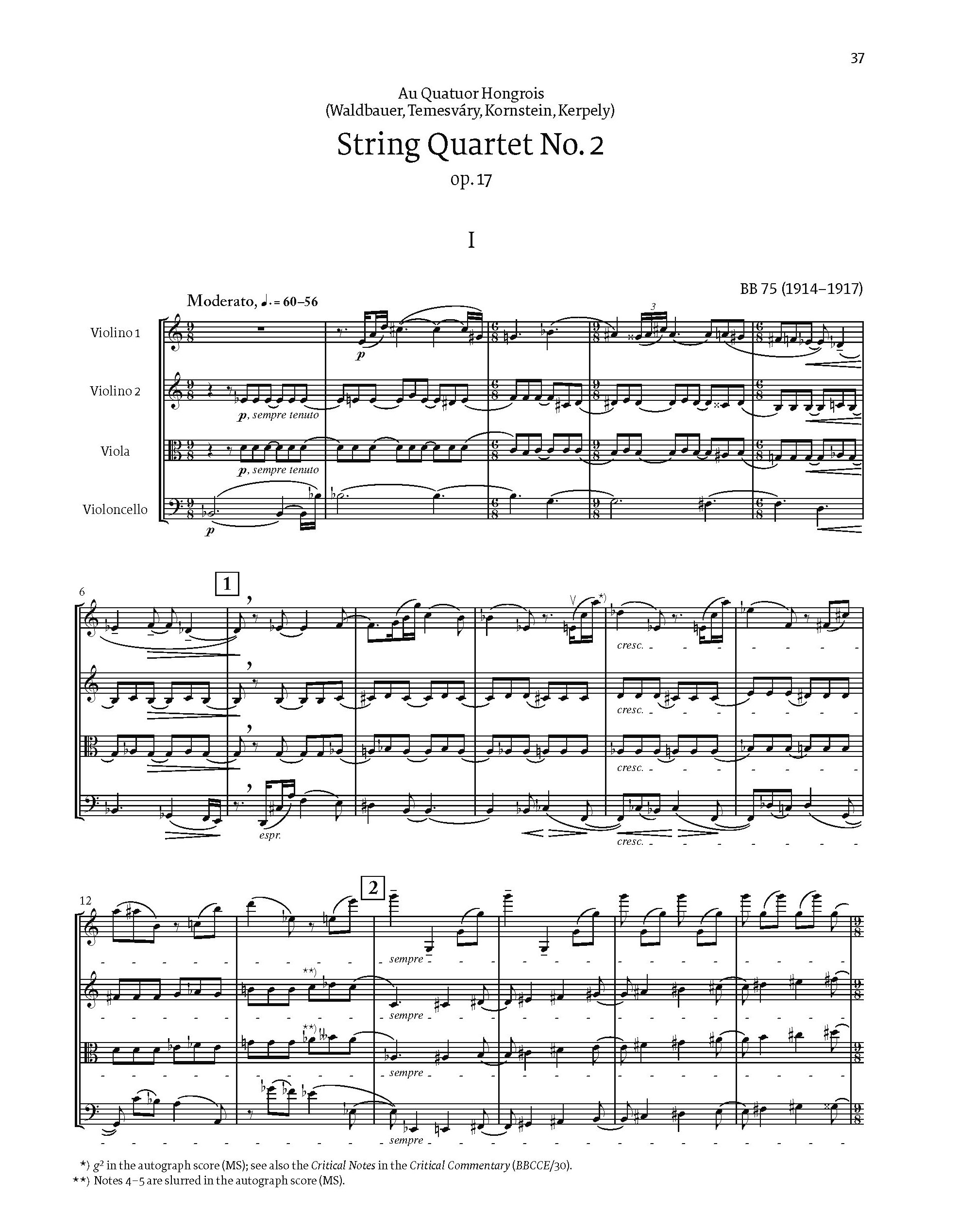 BBCCE 29: Footnotes with variants from the autograph

AO: As you are not only a great scholar of Bartók and his music but also of Joseph Haydn, having also studied the sources for Haydn’s string quartets – may I ask: Do you see any connection between Bartók and Haydn as composers for string quartet? Or do they have nothing in common?

LS: Well, both were ardent “innovators” in many ways, both wanted to create basically “new” masterpieces as their next items. Only for Bartók, the new item was the next string quartet, whilst for Haydn, the next six-piece quartet opus.

AO: Dear Mr Németh, Bartók was no string-instrument player – which may be one of the reasons why his quartets are not easy to play and first performances were often problematic to prepare. As we learn from the highly interesting Introduction to the BBCCE volume, more than 100 rehearsals were necessary before the Waldbauer-Kerpely Quartet was able to play the First Quartet premiere! Have you any idea about the nature of the musicians’ problems? Did the musicians have any influence on a revision of the music text before it was edited for publication? 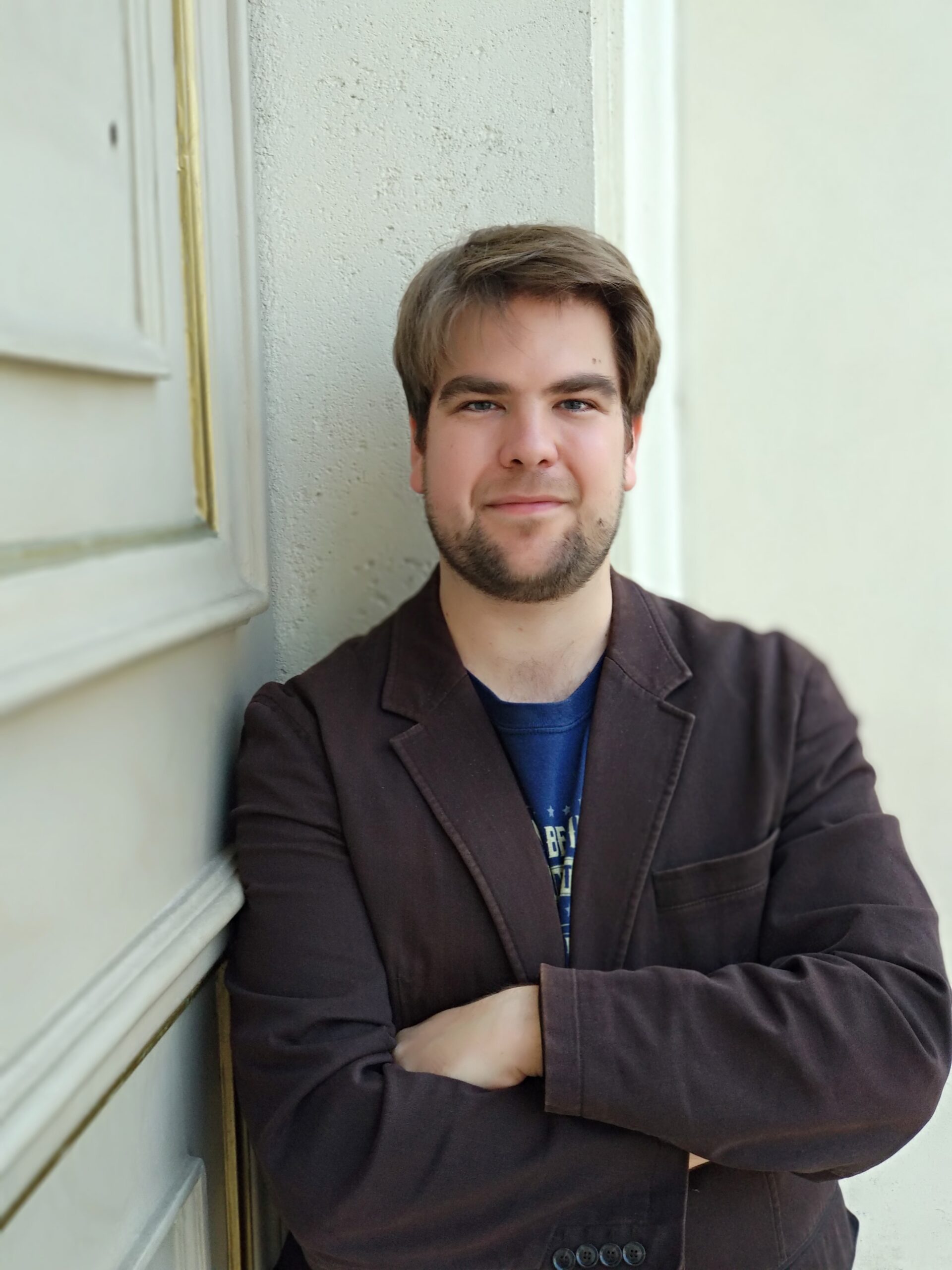 Zsombor Németh (ZN): In a study of Bartók’s influence on violin technique, Imre Waldbauer claimed that at the turn of the 20th century the best chamber musicians in Budapest were proud if they could solve the problems posed by Brahms’s works. This was partly due, of course, to the fact that performers of the period only dealt with works that they could play through without interruption already after only a few rehearsals. Bartók’s First String Quartet was full of innovative ideas, and at half an hour in length it was also quite a long work. It wasn’t unplayable, but certainly required more time in technical preparation than chamber musicians of the early last century were used to. It should be added, too, that in 1910 members of the Waldbauer-Kerpely Quartet were on the average less than 20 years old!

Bartók was on friendly terms with most of the ensembles that performed his works, including the Waldbauer-Kerpely Quartet (the original “Hungarian Quartet”), the New Hungarian String Quartet (first led by Sándor Végh, then by Zoltán Székely, known after 1945 as the Hungarian Quartet), and the Kolisch Quartet. He attended their rehearsals or public performances to listen to his works. Numerous small retouchings were made during or after these occasions, though not every detail found its way into the first editions of the works. That is the reason why we have placed a great emphasis in our edition on presenting information from the sources that can be connected to the early performances of the works. 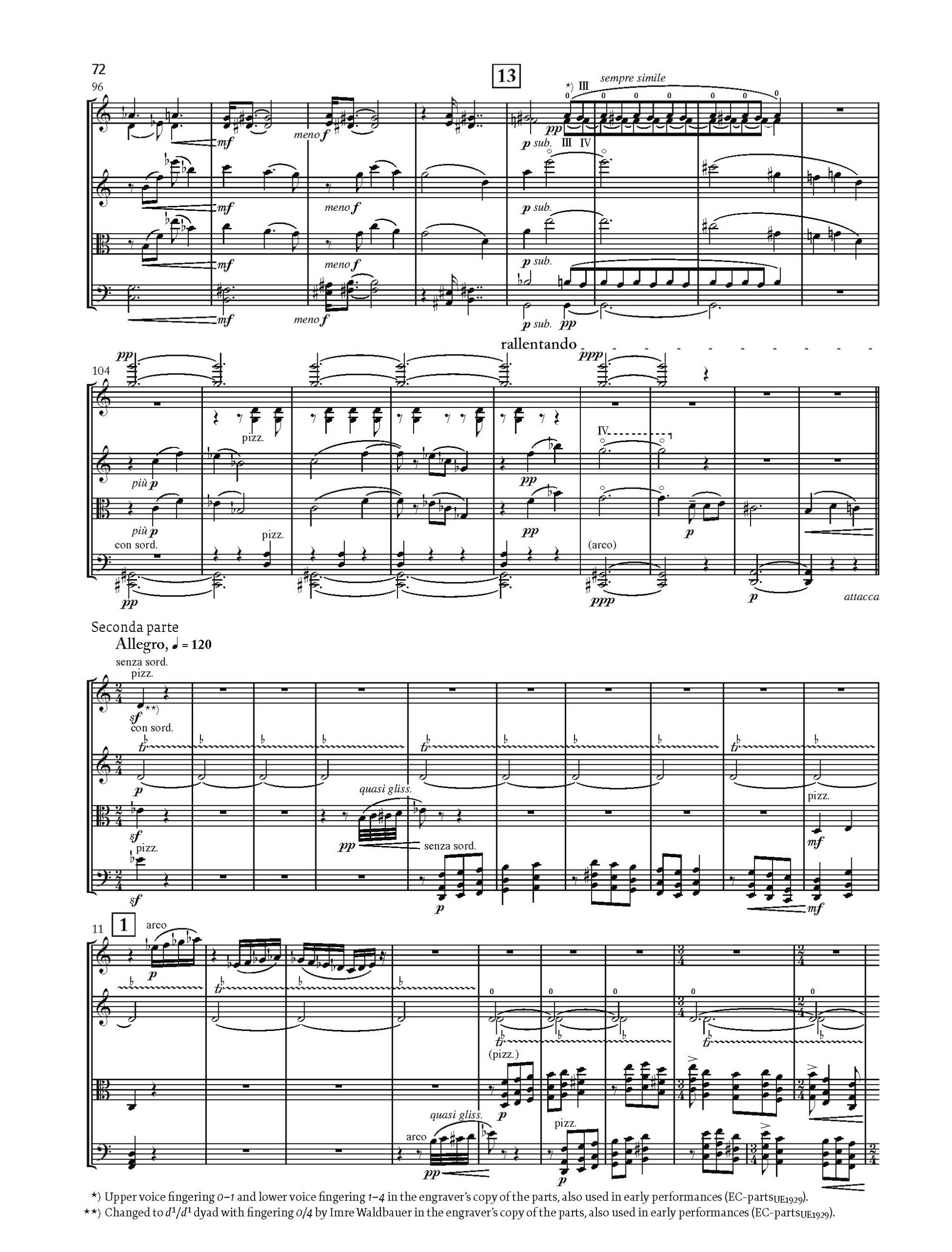 AO: You are not only a Bartók scholar but also a professional violinist. Did you seek the help of other professional musicians whilst working on the edition of the string quartets? Did they influence your view of details in the sources (for example, how to interpret – and edit – slurs or accents)?

ZN: As a violinist I have been working exclusively with 17th and 18th century music for the last eight years. Prior to that, during my student years, I had of course encountered the works of Bartók, but I never played his quartets or any of his violin sonatas. Thus, I consulted with two members of the Classicus Quartet in preparing the Complete Edition: Péter Tornyai, violinist and composer (who plays the viola in this ensemble) and Tamás Zétényi, cellist. Fortunately, they performed all six Bartók quartets during the 2020/2021 season (when we were still working intensively on BBCCE volumes), so they had a really fresh experience not only of the works themselves, but also of the former editions of the works. Tornyai was also kind enough to proofread and comment on the score of the Complete Edition.

As a result of their observations, we have amended and supplemented the chapter on notation. Some of the editorial footnotes that appear in our edition can also be traced back to the conversations which I had with them. It should be noted, too, that decades ago Prof. Somfai already consulted with the great cellist Miklós Perényi, the famous violinist and sought-after professor for chamber music Gábor Takács-Nagy and the members of the Manhattan String Quartet on performance issues. Of course, the conclusions of these are also reflected in our publication.

AO: You mention the chapter “Notation and Performance” that is an essential part of every volume of the BBCCE, assembling the most valuable information for musicians. From the earlier BBCCE volumes we already know that tempo, metronome markings, rubato or articulation details are essential subjects for this chapter – but in the new volume we also learn something about the instruments and Bartók’s special writing for strings, such as the “Bartók pizzicato” or the question of gut or steel strings. Is Bartók already a subject for “historical perfomance practice”?

ZN: Bartók died in 1945, that is, 77 years ago. This is exactly the same amount of time that passed between the deaths of Johann Sebastian Bach and Ludwig van Beethoven. Let’s think about how much performance practice changed between 1750 and 1827! Although the construction of bowed string instruments has remained essentially unchanged since the second third of the 19th century, their fittings have undergone significant changes in the last 120 years. This, of course, indicated changes in the playing technique. I would like to stress, however, that I do not mean to imply that from now on one should play Bartók’s quartets only on “period instruments” and with “period technique”; I simply think that taking historical facts into account can lead to more authentic and enlightening interpretations (especially in the cases of the first two quartets, premiered more than a century ago). It’s up to the editors to share all the performance practice knowledge that is available, and then it’s up to the musicians to decide what they will (or will not) include in their performance. 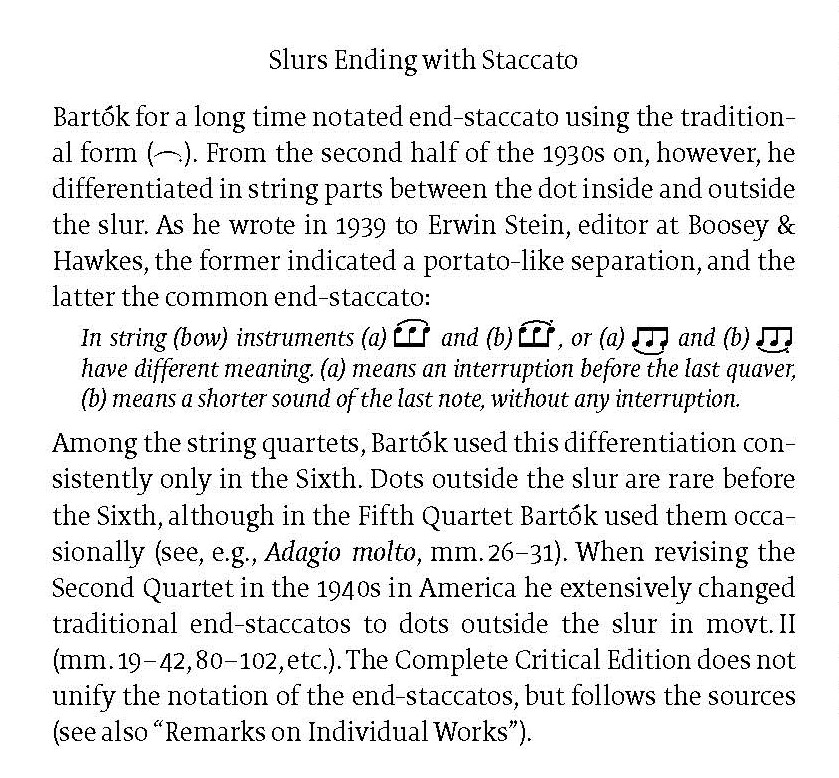 BBCCE 29: Paragraph from “Notation and Performance”

AO: One last but not least question to both of you: What do you think is the most crucial new feature of this new edition in comparison to earlier editions, besides the correcting of earlier editions’ errors?

LS: Just look at the engraving and layout of the music: the first editions of Bartók’s quartets were published between 1909/10 and 1941 by different publishers in very different engravings, some of them with very crowded page layouts. The new edition with a uniform printing style suggests a fresh re-reading of the six well-known scores. More important is that the stepwise changes in Bartók’s notation – often forced by editors of his publishers, think, for example, of tempo and metronome markings –  are unified here as far as possible. But in my opinion, most crucial are, without question, the necessary rich numbers of editorial footnotes explaining variant readings, possible choices, genuine problems. Performers may hate searching for notes in the back of the volume (or in an appendix volume) but prefer a short footnote explanation on the same page of the full score.

AO: Thank you both very much for this interview. I am pleased to announce that the practical editions of the sets of parts for the six string quartets, based on the Complete Edition, are already in preparation. The first two sets of parts will be published within a few weeks, at which time I shall take the opportunity also to report on the special challenges that Bartók’s music text presented in laying out the parts.