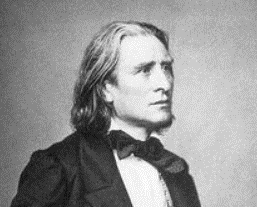 The chances of sources being rediscovered or becoming newly accessible seem rather slim for composers served by modern thematic-bibliographical works’ catalogues – rather confirming the rule are such exceptions as the autograph sections of Mozart’s Piano Sonata in A major K. 331 discovered a few years ago (see Henle blog: The music world will sit up and take notice! On the new Urtext edition of Mozart’s Piano Sonata in A Major KV 331 | Henle Blog). The situation in the case of a composer like Liszt is, however, quite different. Here, where existing is neither such a catalogue of the works nor even a comprehensive and reliable complete edition of the letters, an editor must personally go to great lengths in searching out information on the genesis and publication of a specific work.

So, when I began revising earlier Henle editions of Liszt piano works a few years ago, I had certainly expected to gain new insights, at least here and there in small details. But to come across still unknown engraver’s models for important compositions – no, I didn’t dare hope for that….

First things first, however. Revising the three volumes of Années de pèlerinage first published by Henle in 1978-80 was more than overdue. Known in terms of the sources was that volume III, at least, was no longer up to date with current research. The original publisher of all three Années de pèlerinage volumes had been B. Schott’s Söhne in Mainz. The first Henle edition of volume III had not taken into account the sources still located at the time in the Schott Archives and presumably inaccessible – including engraver’s models, written by different copyists, for all seven individual pieces, together with a complete galley proof. Meantime, the majority of these sources has come into the public domain; the remainder was kindly made accessible to me via photocopies in the New Liszt Edition archives in Budapest.

Not known, though, was the whereabouts of the engraver’s models for the nine pieces in the first volume Premiere Année ∙ Suisse. Originally, they must also have been stored at Schott. To be on the safe side, I enquired at the music department of the Bayerische Staatsbibliothek (Bavarian State Library) in Munich, where preserved and gradually catalogued since 2014 has been the Schott publishing house’s complete production archives. And, in fact, the engraver’s models, written by an unknown hand with additions by Liszt, turned out to be available there, organised by plate numbers!

The situation was somewhat different for the second volume Deuxième Année ∙ Italie, for long known here had been that the engraver’s models, except for No. 2, were to be found in the Liszt estate in Weimar. Apparently, Liszt had expressly requested the return of these originals when correcting the galley proof (around the middle of the 19th century it was by no means a matter of course that along with galley proofs, composers were also given the original engraver’s models back again for checking); No. 2’s removal can be explained by the enclosure of the engraver’s model for Il penseroso when the corrected galley proofs were returned, as Liszt explicitly noted in one of his extant letters to Schott. Later, however, the engraver’s model was incorrectly filed at Schott, that is, not with the material of plate number 13378 (= Années de pèlerinage II), but with number 8315 (= Liszt’s transcription of Hector Berlioz’s overture Les Francs-Juges, 1845). Without the attentive sorting of that material by the Bayerische Staatsbibliothek’s responsible staff member, this engraver’s model would probably have remained forever lost! 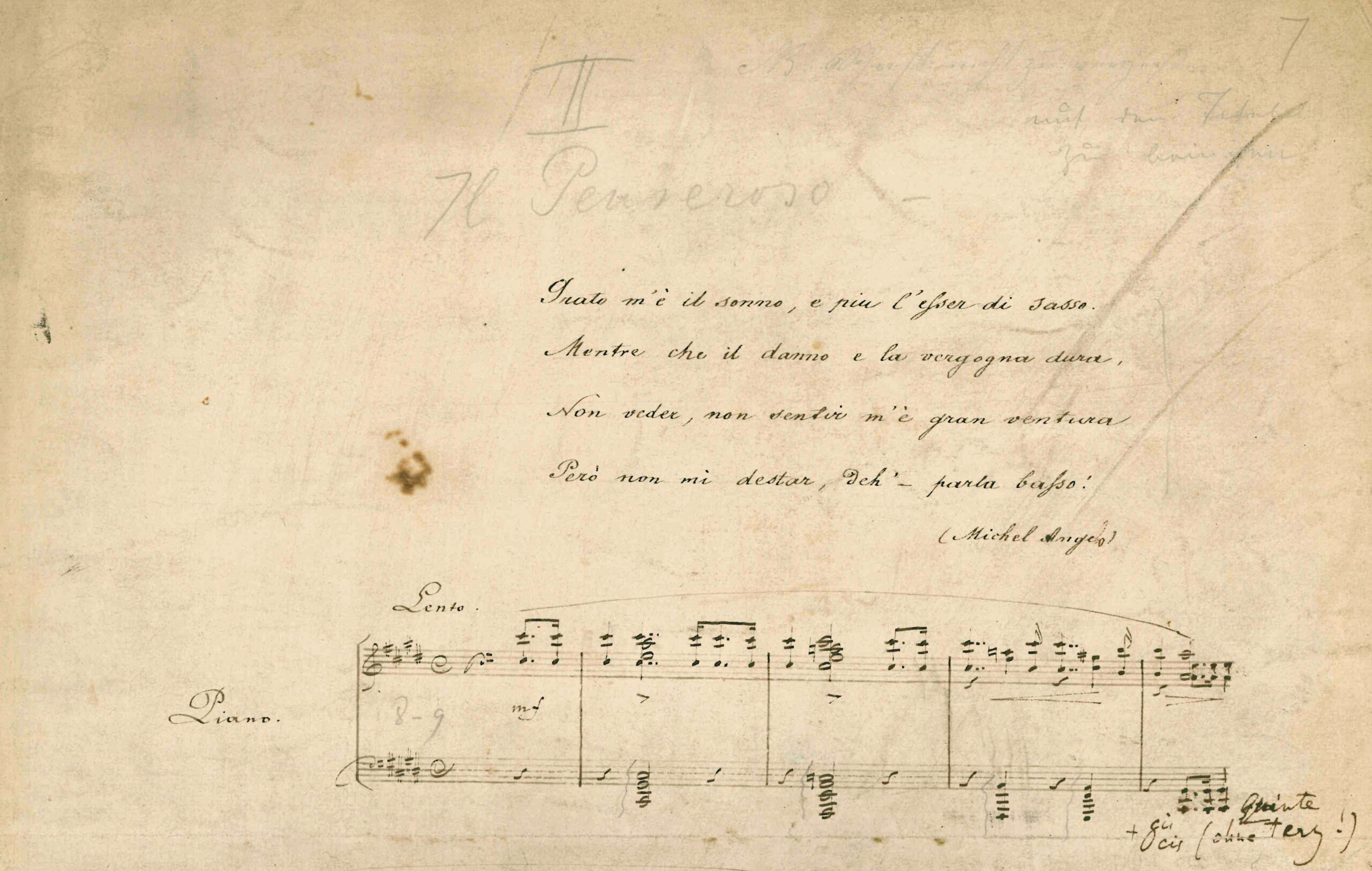 But how does examining such newly available sources affect the revised music text? At first glance, the result may seem disappointing, for in terms of differences between autograph and first edition, even the earlier Henle editions generally followed the first edition, the results of which could now be confirmed in the vast majority of cases by autograph changes in the engraver’s models. It is therefore rather minor additions or corrections to dynamics, articulation or pedal markings in these sources that now turn out to be intended. To give an example: In the old edition of Les Jeux d’eaux à la Villa d’Este (= No. 4 of the Années de pèlerinage III), the dynamics marking for measure 220 is ff according to the first edition, but in the engraver’s model Liszt added another f alongside brioso and Ped, which is, however, easy to overlook:

In the revised edition, the passage has accordingly now been changed to fff. As insignificant on their own as such details may seem to be, they add up to a music text that is clearly closer to the Urtext than the earlier editions.

This also applies to the autographs of Rhapsodie espagnole and the Ungarische Rhapsodie Nr. 2 [Hungarian Rhapsody No. 2] . Though these manuscripts were known to be extant, they long remained inaccessible. For some years now, the private collection containing these autographs has been on deposit at the Paul Sacher Stiftung in Basel and can thus be viewed there. Here, too, though no sensations are to be reported, details are now and then to be changed. Clearly recognisable, for example, is that in measure 377 of his autograph of Ungarische Rhapsodie Nr. 2, Liszt noted sfogato in addition to the dynamic sempre ff that was, however, inadvertently omitted in Joachim Raff’s exemplar serving as the engraver’s model for the first edition, and is therefore also missing in the edition: 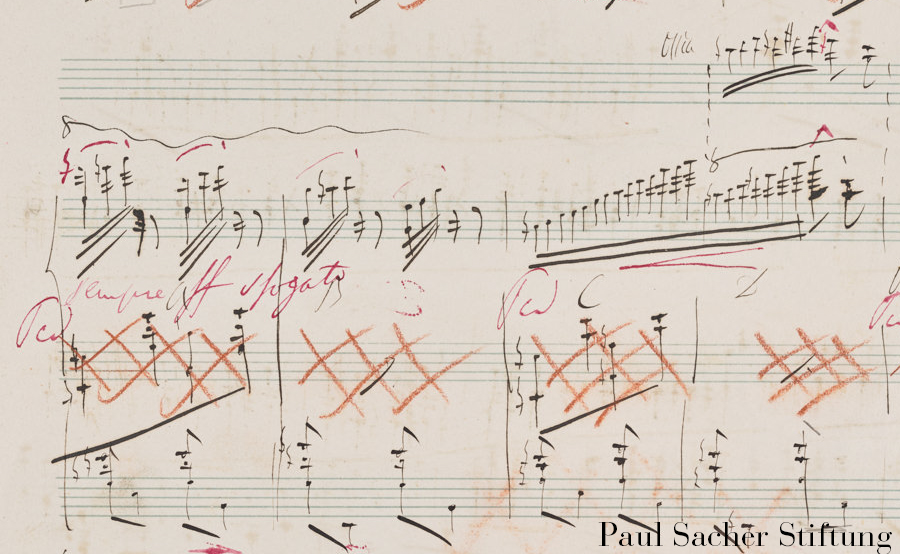 Besides the music text, the Henle Urtext editions also revised the verbal texts that often no longer did justice to the sometimes very complex genesis of individual piano works. Pertaining to the history of collections and cycles, Liszt research has accomplished a great deal in recent years, notably in the well-grounded introductions by Adrienne Kaczmarczyk within the New Liszt Edition’s supplementary volumes. And yet our own research has not been in vain. The Schott publishing house’s extant production log books (also in the Bayerische Staatsbibliothek since 2014) now make it possible to give precise publication dates of the original editions and reissues for the Années de pèlerinage, amongst others; and Liszt’s letters that are still unpublished or have not yet been analysed, make it possible to refine many a detail in the works’ genesis or publication histories. For example, a review of Liszt’s extant letters to his agent and secretary Gaetano Belloni in Paris suggests that the mysterious titles Il lamento, La leggierezza and Un sospiro were probably not added to the French edition of his Trois Études de concert without the composer’s knowledge or even against his will, as has sometimes been asserted in other publishers’ editions.

For me, in any case, the work on the revision sources has shown how exciting searching for new findings in Liszt’s works can be….

In closing, a short overview of the so far published revision sources:
(in parentheses, important, newly-considered sources as compared to the early editions)

This entry was posted in Monday Postings and tagged Liszt, revision. Bookmark the permalink.

2 Responses to »The Unexpected, showing up often! Discoveries in Liszt’s revisions«