Posted on November 28, 2022 by Annette Oppermann 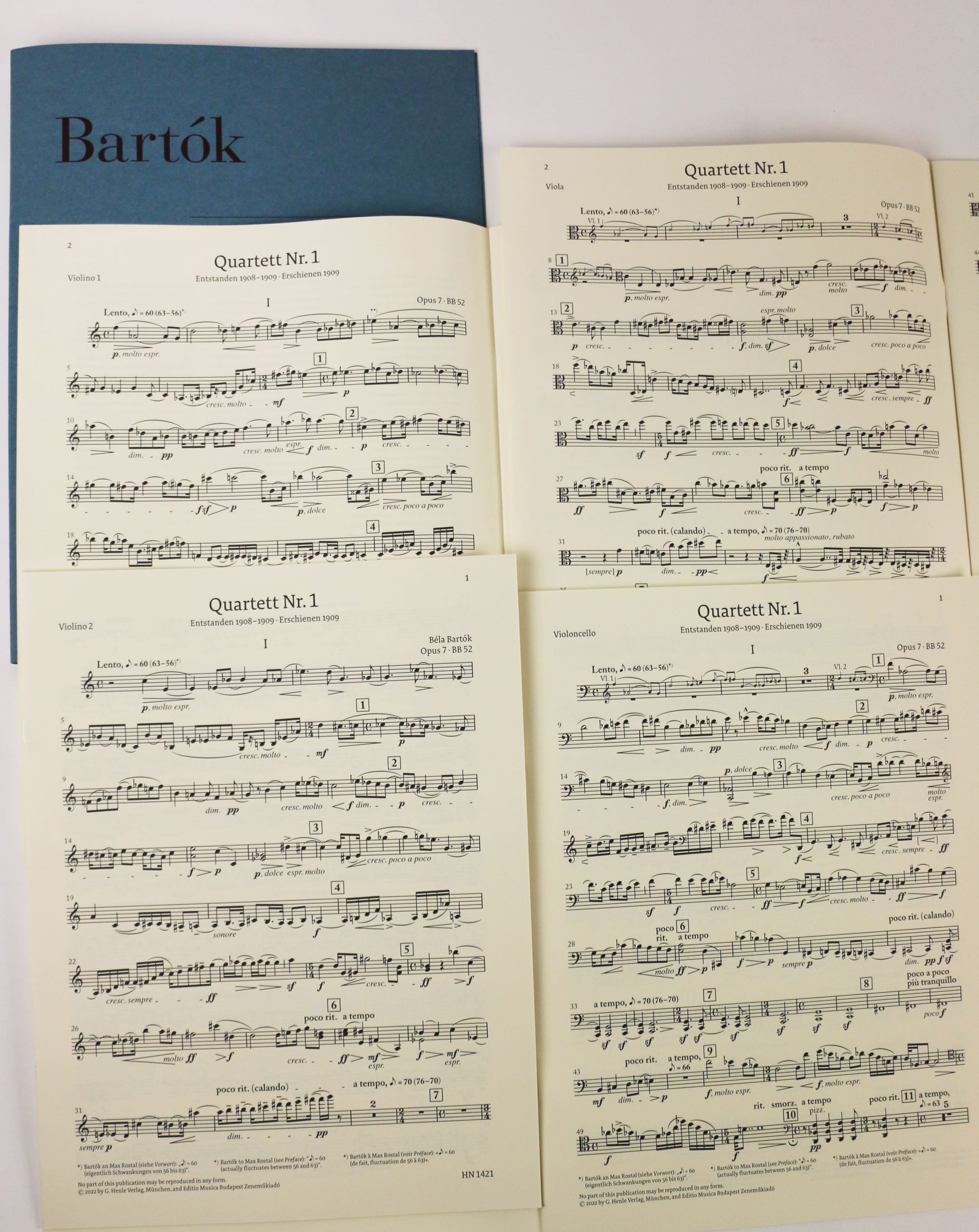 A quintessential feature of the Henle Urtext editions is the parts material optimally arranged for performance. This is particularly important with string quartets, since in concert they are usually played from the music (unlike the situation in solo or duo recitals, where performers often play from memory). For this reason, even in the age of digital music notation, our individual parts are by no means created “by pushing a button”, but quite the opposite: After the original editorial work has been completed and the full score has been typeset, this is where the work really begins in the interaction between music typesetter, editor and musicians, when we contact ensembles familiar with the repertoire, on the one hand, in order to clarify with them practical playing questions, and on the other, we carry out the so-called “parts extraction”, thus, the technical process of producing individual parts from the full score in several steps.

Does all this sound very theoretical? Well then, let’s take a practical look at the process using the example of our just-published parts edition of Bartók’s String Quartet No. 2. As with many 20th-century works, just a glance at the score shows how different in density the notation of an 18th-century quartet looks as opposed to that of a 20th-century quartet: 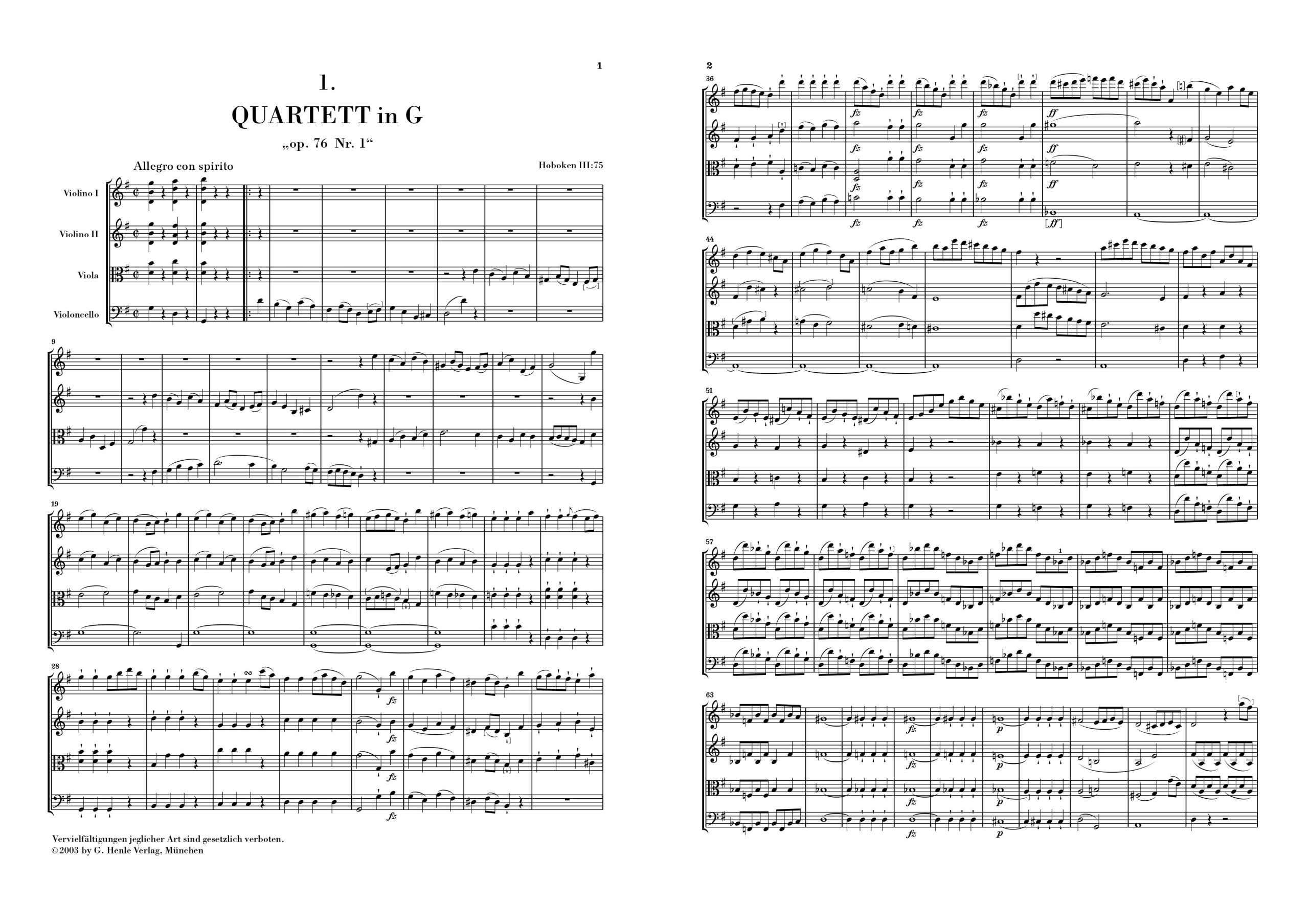 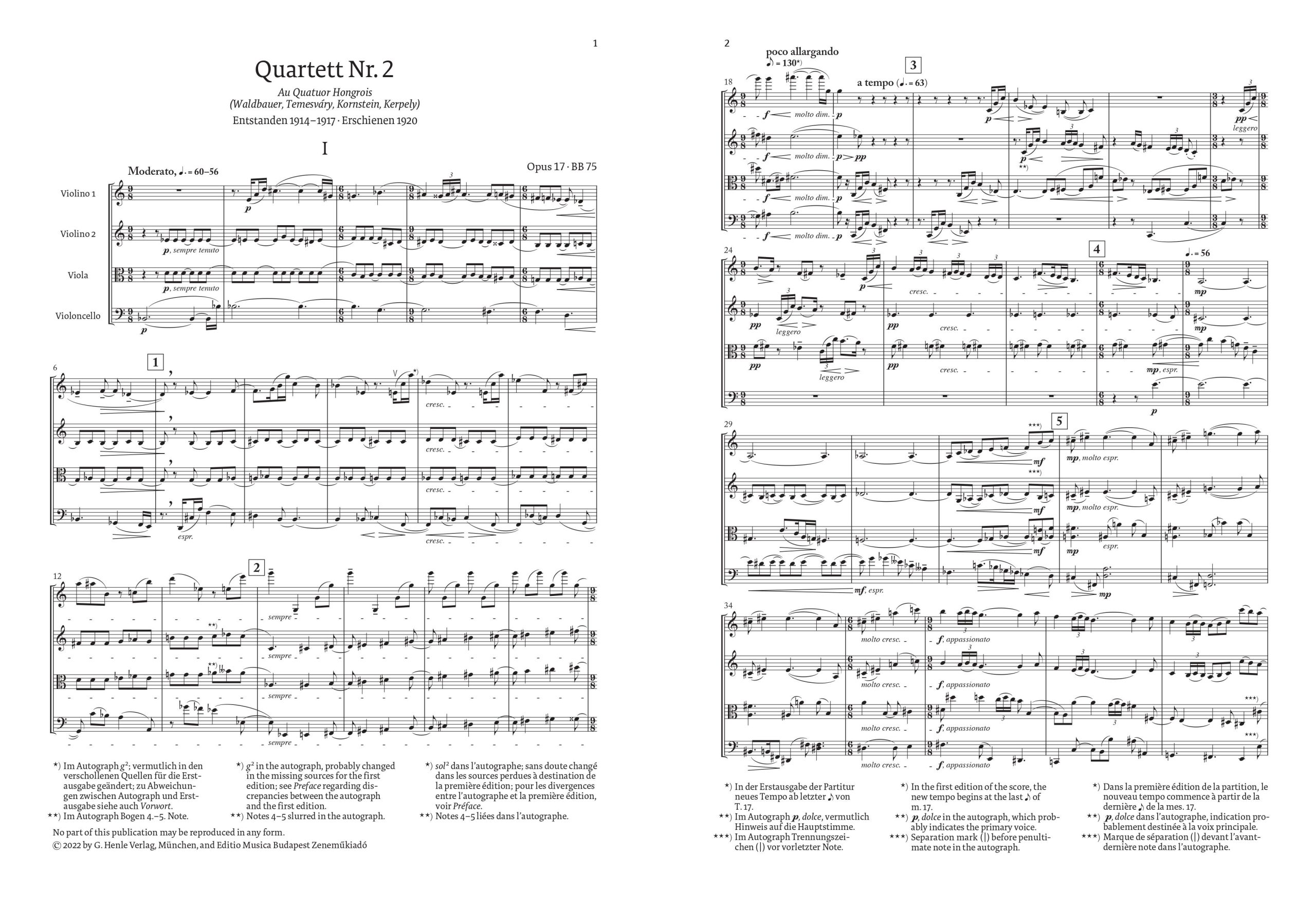 Thus, indicated in Haydn, besides the so-called “primary” pitch and tone-duration parameters, are only very sparingly such “secondary” parameters as tempo and dynamics; more precisely given is just the articulation. As is well known, these “secondary” details, so essential for performing a work, greatly increased during the 19th and 20th centuries: In earlier 2022 “String Quartet Year” blog posts, regular readers have already been able to marvel at examples of the exuberant indications in quartets of a Berg, Zemlinsky or Schoenberg.

Bartók, too, recorded many practical performance details in his full scores – and often revised his meticulous tempo indications, for example, even after going to press, as can impressively be seen from the long tables in the Complete Edition’s Critical Report: 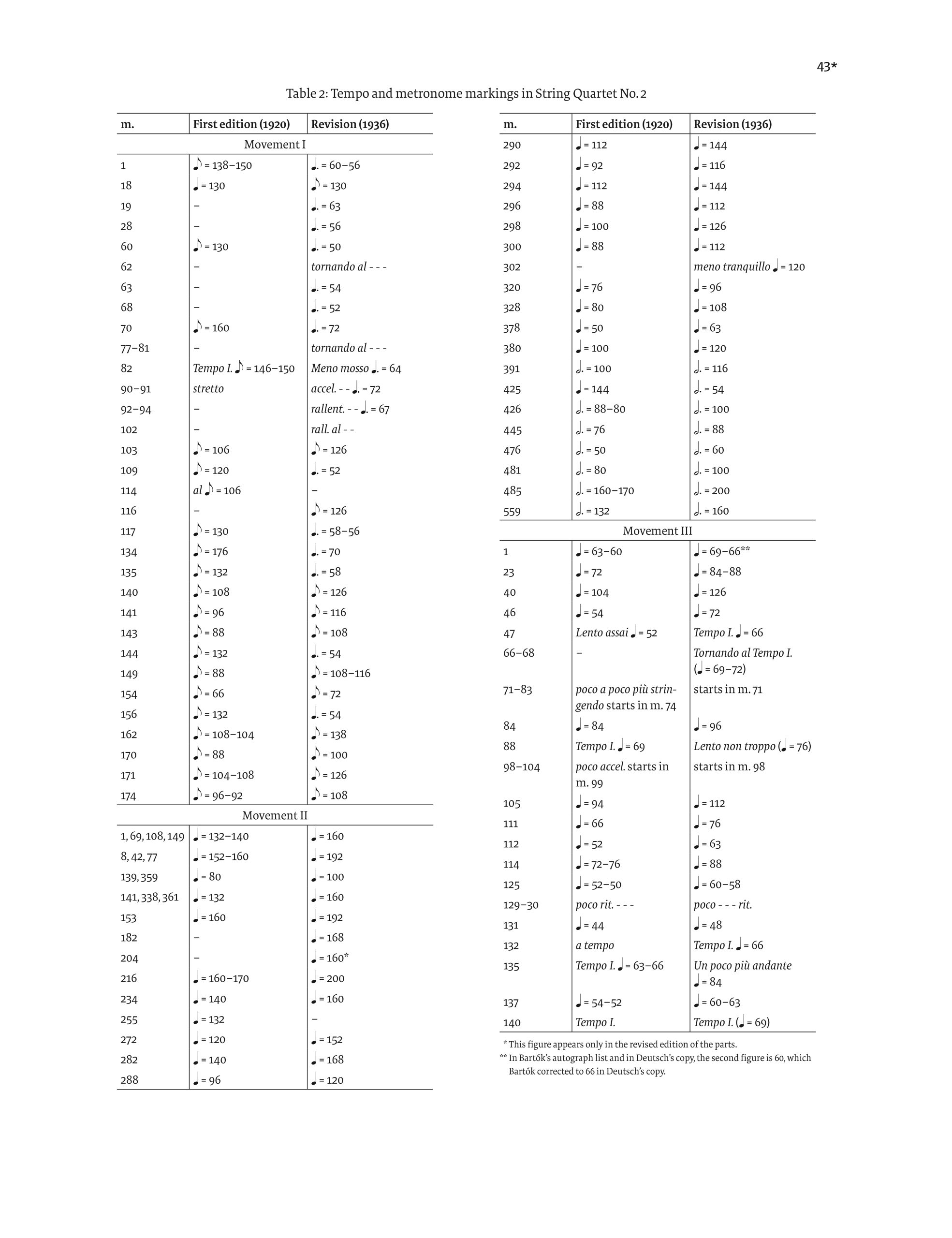 The numerous, sometimes very detailed tempo indications take up a lot of space, horizontally. Vertically, the rehearsal numbers, but above all, also the sometimes very large ambitus of the individual parts prove to be a challenge for a handsome and yet practical notation, especially since also added are the footnotes on variants relevant to performance practice, so typical of our Bartók editions.

From the outset it was clear that in the first movement’s upper parts we would not be able to manage with the three pages of the densely-printed first edition. Rather, sensible now seemed to be even distributing the first 70, Violin 1 measures of the first edition’s single page over a double page, in this way preserving the good page turn at rehearsal number 10 and concurrently achieving an uncluttered layout with also enough leeway for cue notes and footnotes.

The rest of movement I could then be very well distributed over pp. 4–6, with even a suitable page turn for page 5 located in measure 151. Page 6 with the remaining measures 152–180 was left, however, quite empty, which is neither musically appropriate nor attractive – especially since here there were also no footnotes to be accommodated. Therefore, the music typesetter immediately suggested an alternative when sending us the so-called “rough layout” (i.e., a 1st proof showing the music text initially apportioned only per page, but not yet configured in detail – as you can easily see in the illustration below): Page 6 could also be appended to page 5 as an extra page foldout, so that no page turn is needed and the text is better distributed – a solution that we found much more convincing.

We have such page foldouts in many of our separate parts, whether for chamber music or highly virtuosic solo literature, because they provide more leeway for a good page layout. But, they can only be included at a movement’s beginning or end. Thus the performer can unfold the extra page before starting the movement, and then turn the leaf; only before the next movement starts, he also has to turn the extra page.

In addition to page turns, cue notes are another aspect to consider when setting up the individual part – also and particularly in the case of Bartók. The 1920 first edition almost completely dispenses with this. However, the work’s music structure, rhythmically not uncomplex and with the constantly changing tempo, makes entries quite tricky in some places, so that here, seemingly, was still room for optimising. Indeed, we even considered whether in some places an additional stave with the melody-bearing part in small cue notes might be useful, as is quite common in other 20th-century chamber music editions (and also in Bartók’s later quartets).

Our perusal of various quartets led to astonishingly various findings: Whereas in some of them cue notes were even considered superfluous in view of the piece’s great degree of difficulty – definitely not to be sight-read – in others, additional small cue-note staves could be introduced in so many places that the separate parts would have become as thick as books….  So, we had to gauge the situation, deciding on a middle course for this quartet: with considerably more cue notes than in the first edition, facilitating entries, especially in rhythmically-metrically intricate places – such as, for example, at the first movement’s rehearsal number 10, where encountered are tempo changes together with syncopated figuration: 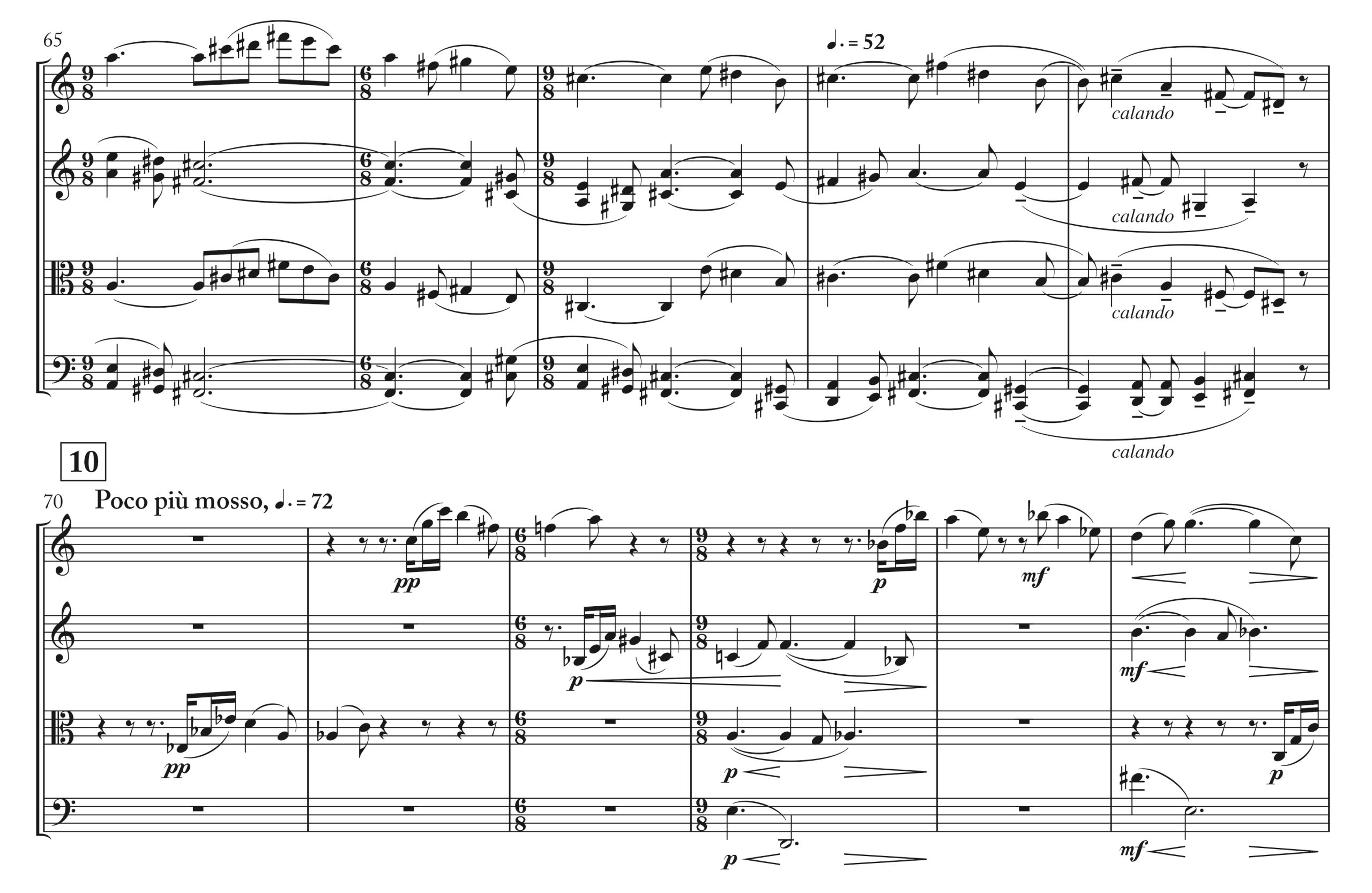 For the individual violin 1 part with cue notes, see fig. above

In the second movement, too, we have fortified the passage interspersed with rests and fermatas between rehearsal numbers 19 and 21 with a few cue notes, as opposed to the first edition, and have additionally indicated the general rests – such as is customary in our parts editions – to facilitate musical orientation. 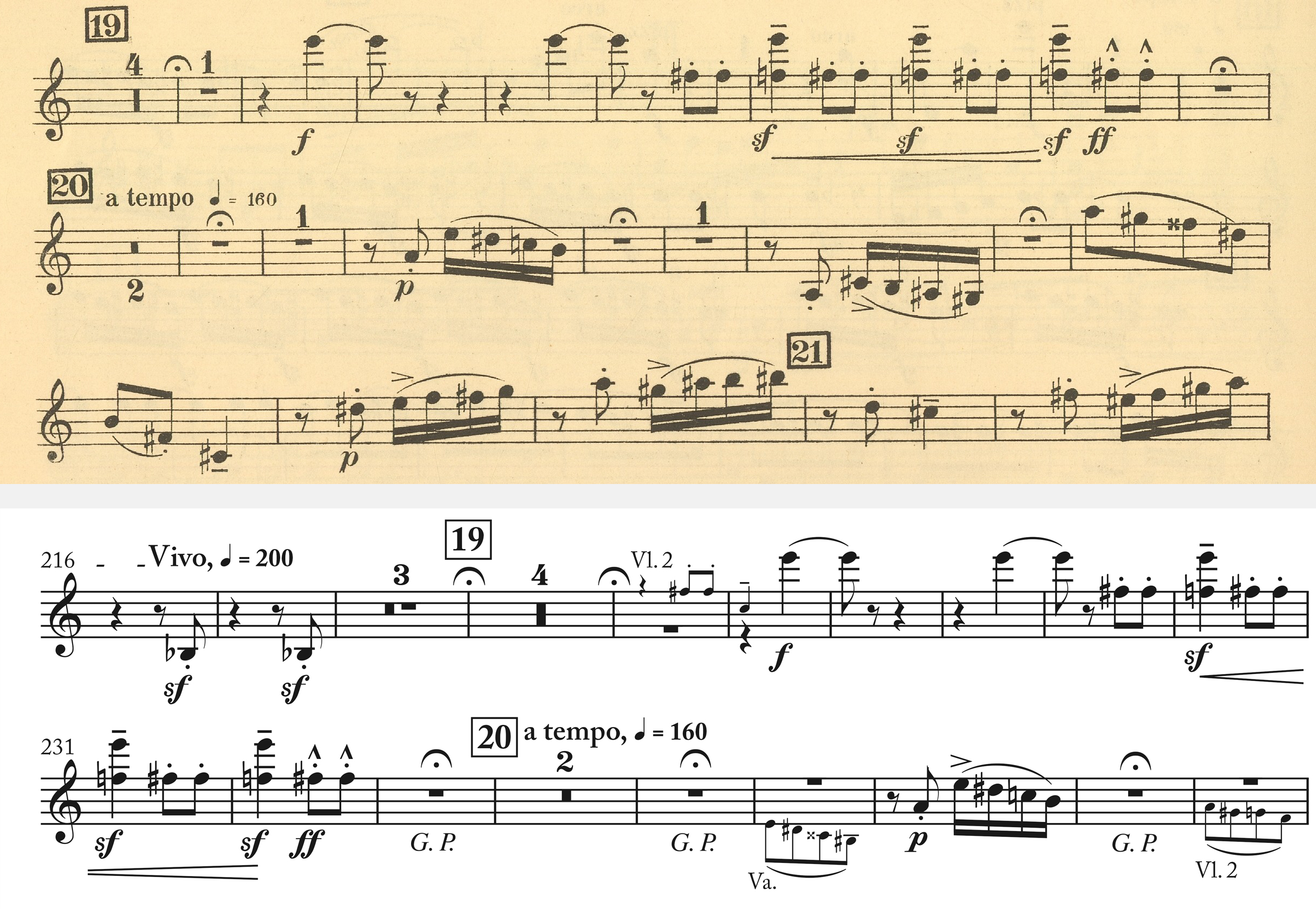 With these aids we would like to offer musicians the best possible introduction to the fascinating world of Bartók’s string quartets. As a matter of course, our Bartók-quartet parts also provide another practical aspect, presenting a veritable compendium of performance-practice in the Comments at the end of the edition, with information about Bartók’s – very precise – ideas on articulation, vibrato, glissando, muting. This, after all, is true in all the numerous Bartók Urtext editions that since 2016 the Henle Verlag has been publishing, based on the Complete Edition.

2 Responses to »Bartók’s String Quartets: from the score to the individual parts«