Posted on January 9, 2023 by Norbert Müllemann 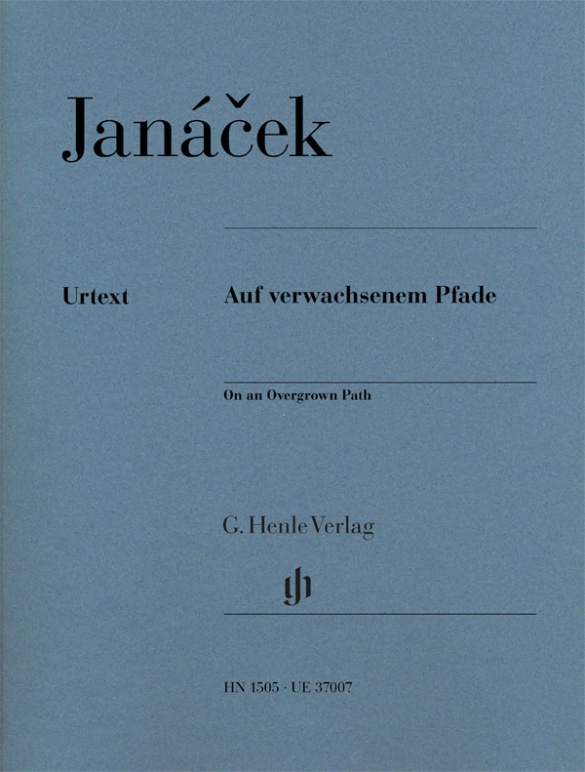 No, the title is not a typo. The recently published Janáček edition is, of course, called On an Overgrown Path (HN 1505).  But an editor setting out in search of this work’s valid Urtext must truly go down labyrinthine paths. But let’s start at the beginning.

Amongst the numerous projects crossing my desk are always those that I would describe as special affairs of the heart. The Overgrown Path is one of them. Since the G. Henle publishing house had already published several representative Urtext editions of Janáček’s works (always in collaboration with Universal Edition, Vienna), I was particularly looking forward, finally, to tackling the Overgrown Path, surely this composer’s most important piano work. Our Janáček editions are edited by Jiří Zahrádka, the world’s foremost specialist in this composer and head of the Janáček Department of the Moravian Museum in Brno – thus, where it all began. In keeping with the occasion, we met, together with Heinz Stolba of Universal Edition, at the Janáček House, the site not only of a museum with original rooms, but also housing the unparalleled archives of all relevant sources for the composer’s life and work. At this meeting where Zahrádka presented us with the original source material for the Overgrown Path (manuscripts and prints), we took the opportunity of discussing both the editorial principles as well as the content and scope of our edition. For, as so often with Janáček, the piano cycle had a long and convoluted genesis during which, repeatedly, individual pieces were added, discarded, earmarked for a second series but then never completed. We quickly agreed that our edition must contain all the music material extant in conjunction with the Overgrown Path – no easy task. 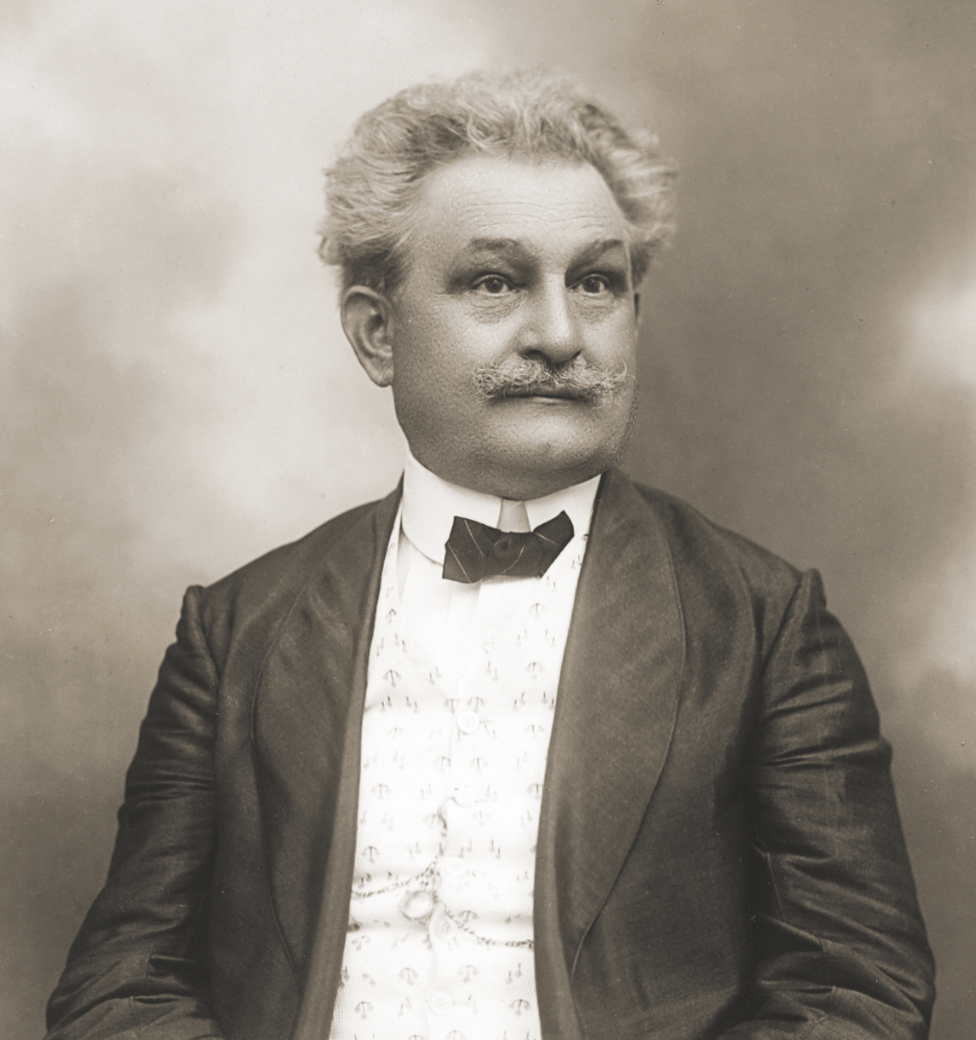 This is not the place to duplicate the genesis history laid out in exemplary detail by Zahrádka in our preface. Just this much should be said: The miniatures were originally composed for harmonium, only six pieces initially, five of them published in 1901/1902. Not until years later did the composer return to this work, now explicitly describing it as a piano cycle. As he then began composing new pieces, the cycle finally included ten pieces by 1908, incidentally, only acquiring their poetic titles during this period (though the title of the complete cycle, On an Overgrown Path, was already established in the earliest extant source of ca. 1900). Another three years passed, however, before the now ten-part anthology was published. It was known curiously enough even from the publication year 1911 that now Janáček had already started to work on a “second series”, a fact even announced in a journal. This project remained a torso, however, with only one piece appearing in print, a second piece extant in a manuscript and a third never finished.

How should we deal with this? The best solution seemed to us to publish the ten pieces of the first series, followed by the two completed pieces of the second series. Our edition then features in an appendix two pieces that Janáček had, so to speak, put aside on the “path” en route out of the first series. And, in the appendix we also have the unfinished piece from the second series – in its first, neatly copied form before Janáček began to pencil changes into this manuscript source. Since his corrections are hardly legible, contradictory and incomplete, the final form of the piece cannot be reconstructed. We felt it important to convey this impression as well, so after the music text, our edition includes a four-page reproduction of the unfinished piece’s original source to give everyone an idea of what may have been driving the composer here.

Thus, just determining the edition’s content alone was already a challenge. An even more difficult task, however, was clearly the editorial procedure, for as the creative process suggests, the source situation is complex. Although only one piece (from the second series) is extant in an autograph, numerous copies, editions from various stages as well as also galley proofs with Janáček’s entries bear witness to the years of work on this cycle. We do possess a composer-authorised first edition of at least the first series, but its music text raises questions needing clarification in countless places.

One reason for the many ambiguities may be Janáček’s difficult-to-read handwriting. To give you an idea of that, on the right you can see an autograph page of No. 2 from the second series. Much is only sketchily indicated there. The copyists’ task was to transcribe these autographs into clearly legible manuscripts, and errors did, of course, occur. Janáček proofread the copies, some of them were recopied, before all were finally submitted to the publishing house for publication. During the production process the engraver in turn made errors, which Janáček tried to correct through proofreading. Extant proofs show evidence that the composer did indeed very carefully proofread. But he neither saw all the errors nor eliminated all the ambiguities; misleading corrections even created new confusion. 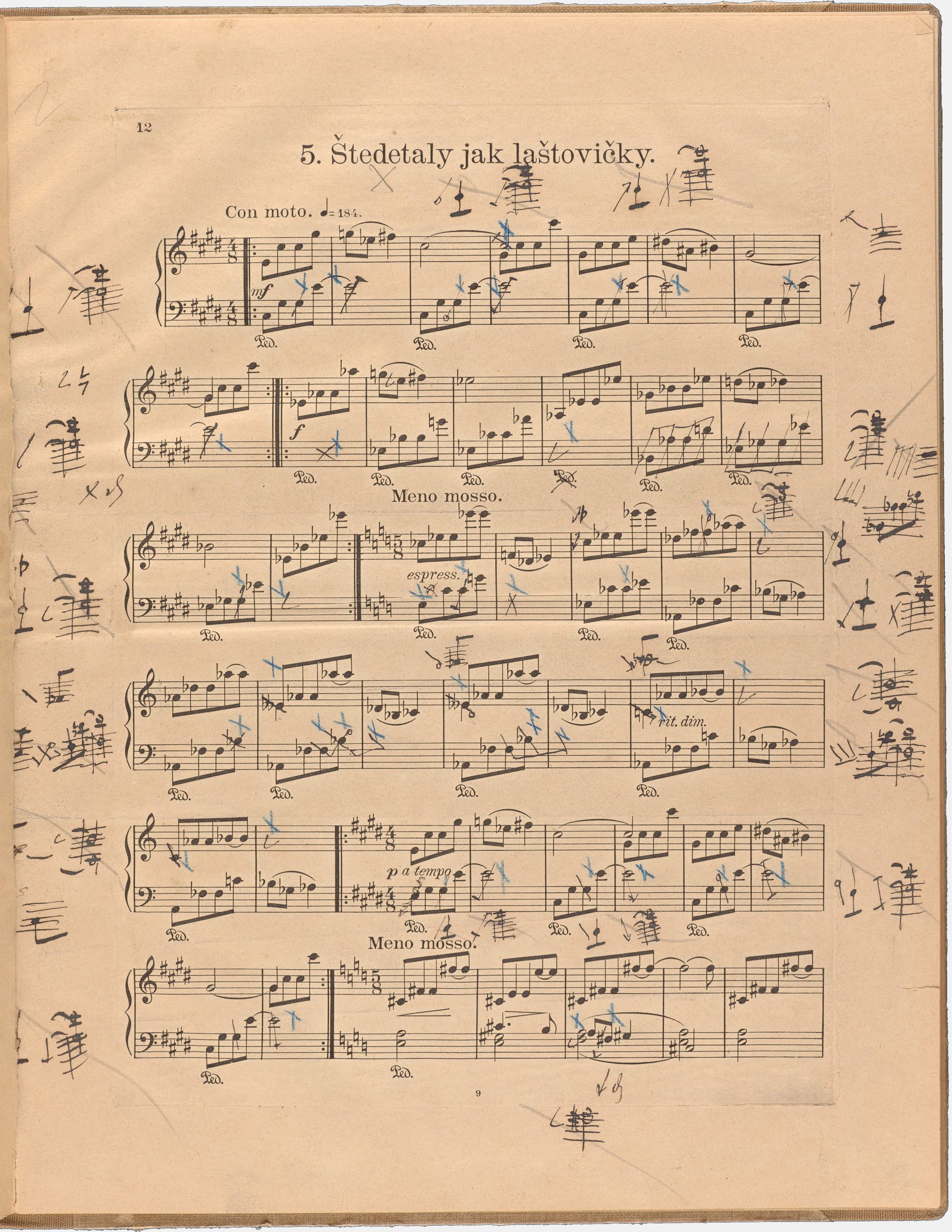 As a result, starting from the authorised first edition, our editor Zahrádka repeatedly had to go back through all the source layers. In so doing he demonstrated an archaeological flair, for it was always a matter of uncovering earlier work layers to thus find answers to our questions about the surviving music text. I’d like to pick out two examples.

In No. 2 of series I, mm. 33 and 34, the notes in the right hand’s lower voice are not clear. The notes in question are g♭1 and f1, both directly around the bar line. 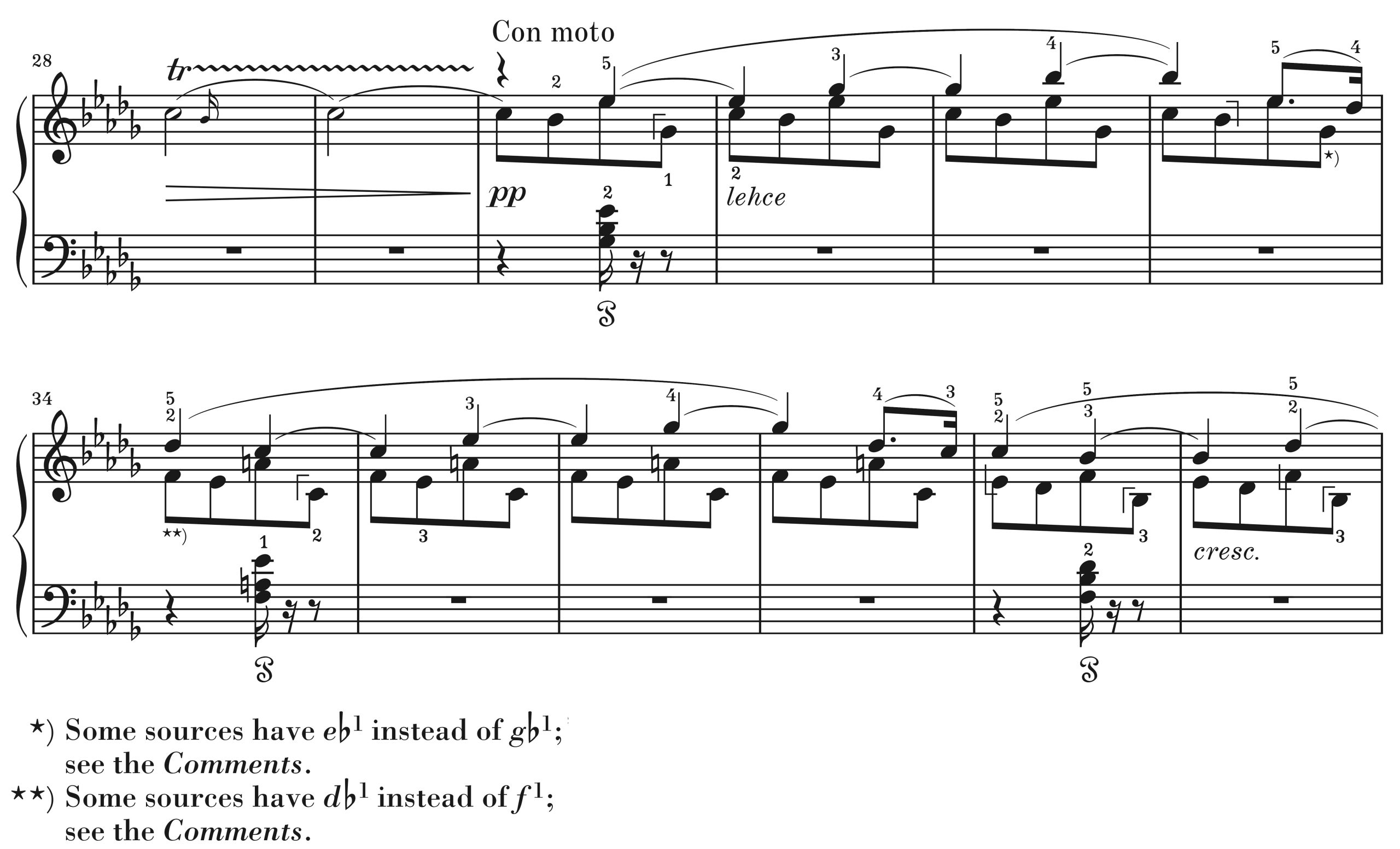 In the earliest sources – the two copies of the harmonium version – m. 33 reads g♭1, as in our edition. In the first edition of the harmonium version and in all subsequent sources, though, it is e♭1. A subsequent change by Janáček? In the galley proof that he proofread, it is in any case e♭1, uncorrected. The first lower note in m. 34 of the first complete cycle edition is d♭2 (the same note as the upper voice! – this is also so in the galley proof, again uncorrected). All earlier sources, however, have f1. In both cases we have favoured the early sources because we believe that the later readings are errors that Janáček simply overlooked. Footnotes in our edition do, however, draw attention to both alternatives.

The second example is from No. 5, series I. In m. 10, the 2nd right-hand note in the first edition clearly reads e♭2, though in the copy (here, the only earlier source), it is an e2, with a cautionary accidental ♮. Which is correct? The early or the late version? A glance at the galley proof reveals something astonishing. The first-edition engraver had originally engraved an e2, but without a cautionary accidental. Janáček added a correction mark in front of this note in the galley proof and clearly wrote a ♮ in the relevant marginal annotation.

Detail from the Fig. above

The engraver transcribing Janáček’s corrections obviously misread it, however, having not paid any attention to the marginal note and interpreting the correction mark as ♭. Thus, the first edition and also a reprint (during Janáček’s lifetime) appeared with e♭2 without the composer’s having protested. The e♭2 is certainly plausible owing to m. 2, but the differing harmonic context and Janáček’s entry in the proof leave no doubt that e2 is actually intended.

These are only two examples of the truly “labyrinthine paths” that our editor Zahrádka had to follow in order to distil from the sources a reliable Urtext. Overall, however, we have endeavoured to make as many as possible of Janáček’s notational idiosyncrasies perceptible. Thus, when the execution is unambiguous, we deliberately preserve some rhythmic notation that seems unusual by modern standards. Even notes that should actually be reinterpreted enharmonically according to the harmonic context, we have left as notated by the composer. Janáček’s entirely individual tonal language, sometimes also expressed in idiosyncratic notation, thus becomes transparent in this new Urtext edition.

Many thanks to Jiří Zahrádka and Heinz Stolba for enabling us to embark together on this Overgrown Path! (Here in rather beautiful recording by Ivan Klánský.)