It goes without saying that the focus would be on Debussy’s piano works from the outset of Henle editions of the French composer’s music. For one thing, because the publishing house’s self-image was based from the start on the core repertoire of piano music forming its catalogue; but also because of Debussy’s large multitude of pioneering and popular compositions in this genre – from the Arabesques to the Études.

Apart from the special case of the early piano trio that could appear in 1986 as a first edition (HN 379), shortly after the rediscovery of the autograph sources, Debussy’s chamber music – a total of only nine opera, though sometimes very weighty ones – had to wait until the main piano works were available in Urtext. Then from the 1990s on there appeared one after the other, Syrinx for flute solo (HN 496), the two late Sonatas for violin (HN 410) and cello (HN 633), the two clarinet pieces Première Rhapsodie and Petite Pièce (HN 789) as well as the Scherzo (also known as Nocturne et Scherzo) for cello and piano, which was edited together with an Intermezzo (the 4th movement of a lost suite for cello and orchestra, arranged by Debussy for cello and piano [HN 945]). The last two chamber-music works, which I would like to discuss in more detail below, came out in time for the 2012 anniversary year: the Sonata for Flute, Viola and Harp (HN 1026) and the string quartet (parts edition HN 999, score HN 9999). With that, Henle is today the only publisher offering Debussy’s entire chamber music in Urtext editions. 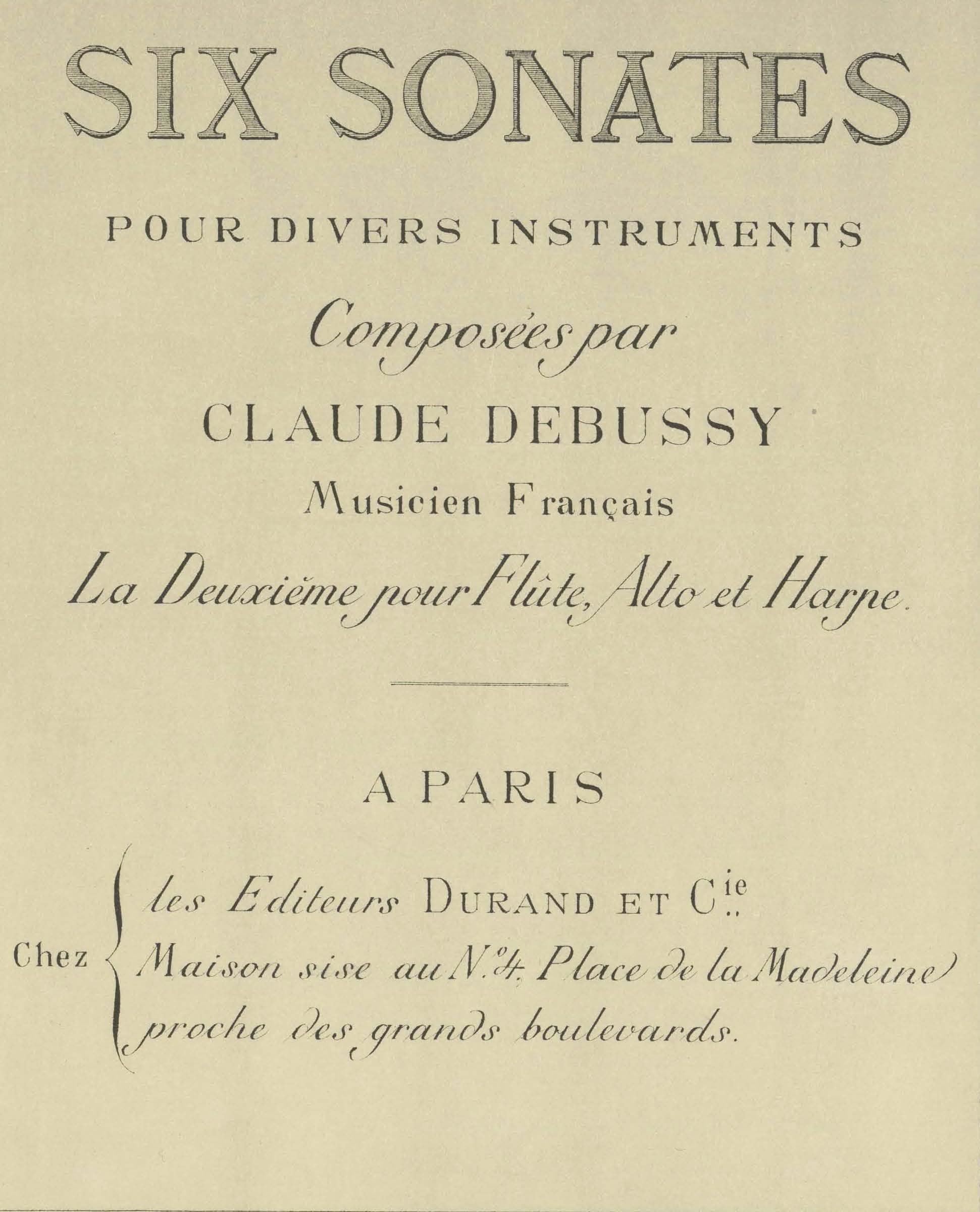 Inner title of the first edition of the Sonata for Flute, Viola and Harp (Durand 1916)

In the summer of 1915 Debussy tackled a major project, to include six Sonatas for various chamber music ensembles in the spirit of the classical French tradition. Of these, he was able, owing to illness, to carry out only three works, with the second Sonata (for flute, viola and harp) standing out because of its unusual scoring. With its distinctive, slightly melancholy sound, it is probably the most beautiful of the three late Sonatas, but at the same time also the least known, for works with harp still eke out only a shadowy existence in the chamber-music business. 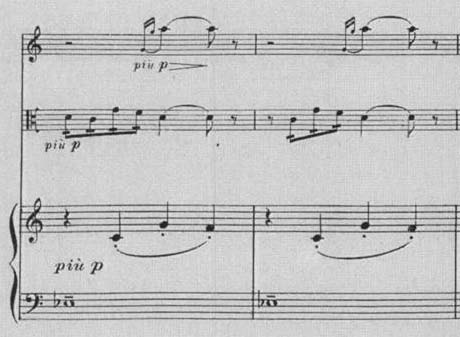 Anyone familiar with Debussy’s already very early characteristic way of composing in “modules” with unaltered repetition of one or more measures will be perplexed here. All the notes are the same, only the viola has at the start of measure 73 an eighth-note rest instead of two d1 sixteenth notes. The autograph shows a correction at this spot: Originally, in measure 73 Debussy also notated a d1 still clearly recognisable by the beaming, then erased the note and notated the eighth-note rest instead: 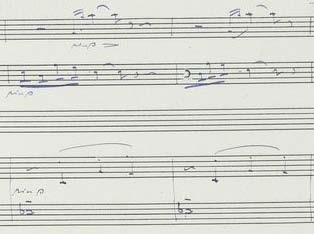 This results philologically in a clear fact: autograph (after correction) as well as undoubtedly the no longer extant engraver’s model (a lost copy of the autograph) and first edition show the same music text. If you step back and look at this spot in the surviving sketches (Winterthurer Bibliotheken, Sammlung Winterthur, Dep RS 11/2c), you can recognise that Debussy first notated the two measures as they appeared later in the print, that is, with a note on first beat in measure 72 (though on another pitch, a instead of d1), but then crossed-out this note in favour of a rest: 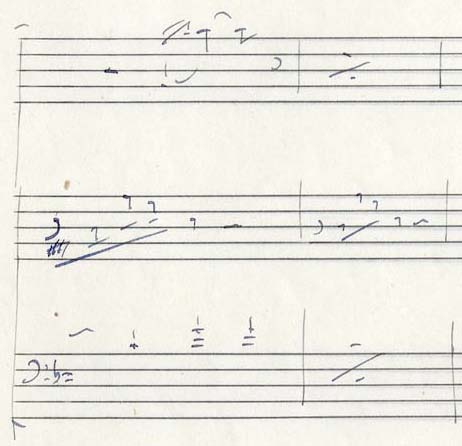 Apparently, Debussy created this headache that at first glance appeared like an uncomplicated viola spot. Schematically, these three versions follow each other (in parentheses, respectively, findings on each first beat in measures 72 / 73):

Of course, in an Urtext edition the last version (which was also the first one) must be printed here. So, no problem – or what?

As is known from other instances, Debussy often repeatedly changed measures in the manuscripts before or during the publication process, sometimes, though, even still afterwards. No document for the Harp Sonata is known with a subsequent change at this spot, nevertheless, there still remains some uncertainty: Can we be certain that had Debussy, then already seriously ill, taken the opportunity for an intensive scrutiny of the print, he would have altered it in the sense of an alignment? To take this uncertainty into account, the Henle edition adds a reference to the comments where changes in the manuscript sources are explained, indicating explicitly that we cannot rule out the possibility that both measures are supposed to be the same in the first edition. Violists who might prefer to perform both measures the same need not therefore have a guilty conscience. 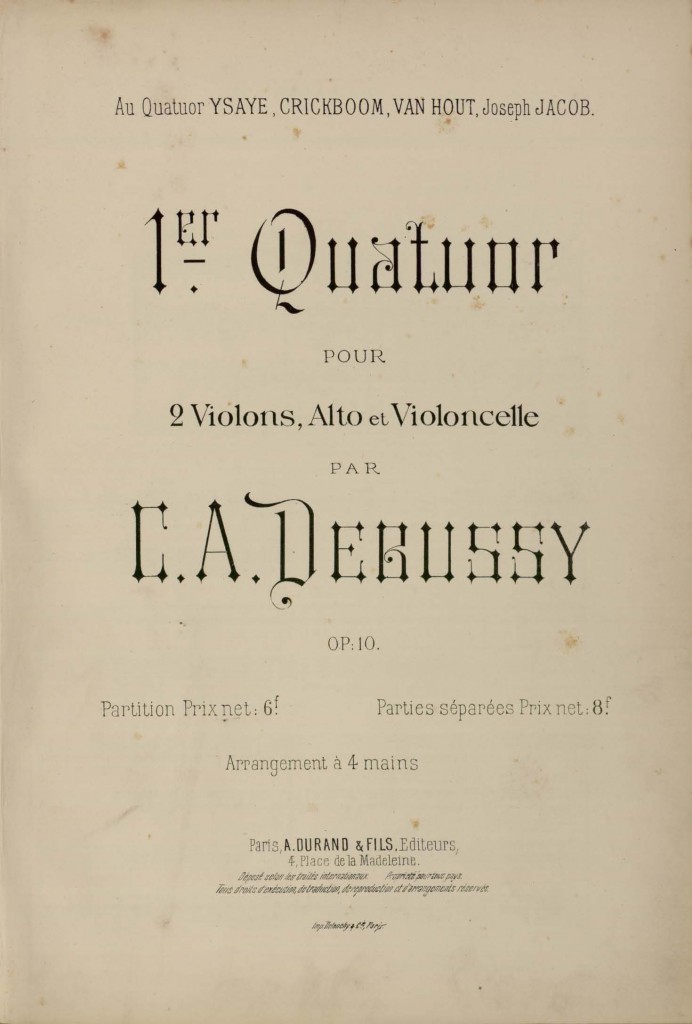 Apropos, changes after publication. A prime example of this exists in the string quartet published in 1894. Extant are two exemplars of this first edition with corrections. The first (C1) reveals entries by various writers and probably functioned as a redaction exemplar in the publishing house. The second (C2), a kind of personal exemplar, has, on the other hand, corrections exclusively by Debussy himself. He must temporarily have also had access to C1, for a few entries there are clearly in his hand. Both exemplars with corrections served as models for the corrected new issue appearing in 1904. There are, of course, problems in the places where this new issue differs from C1 and/or C2. One of these places can be found in measure 124. In the autograph Debussy stipulated p for all the instruments:

The spot was printed the same in the first edition (score and parts). To be found in C1 in an unidentified hand is the change to pp for 2nd violin, viola and cello: 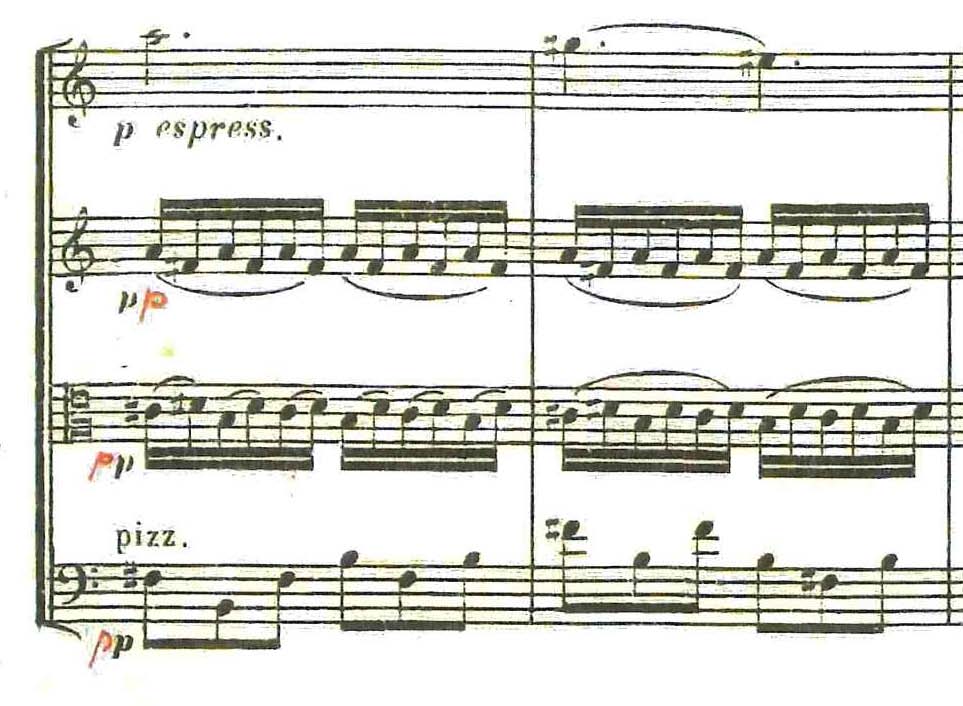 In C2 Debussy notates the change to pp, however, only for 2nd violin and viola: 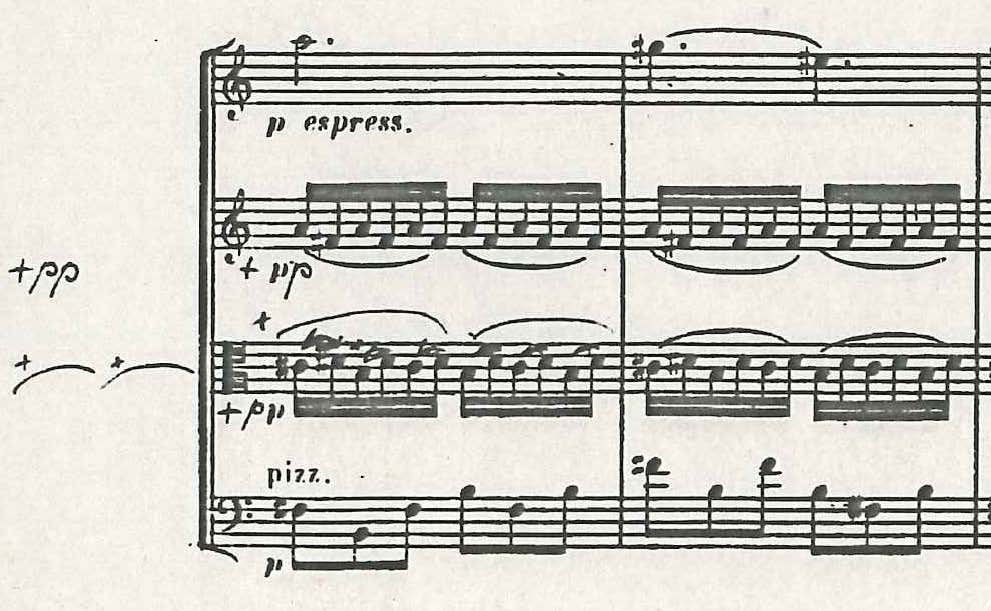 The point in time when Debussy made his entry remains unclear: Did he use C1 as a model or had he notated his correction already before, without knowing about the entries in C1? In the first case, a mistake in the transcription couldn’t be ruled out (he would then have forgotten the pp for the cello part), in the second case, we would have to assume rather that he deliberately did not change the cello dynamic. In the new issue of the score, the correction of the dynamics was not taken into account (executed, on the other hand, is Debussy’s bowing correction for the viola part), and in the relevant parts edition only the 2nd violin has the pp, thus also not helping further to clarify anything.

Now, the unknown corrector in C1 certainly did not make his entry without some kind of reference. Apparently, his concern was the alignment with analogous places (measure 56 and again measure 70), where the first violin likewise plays p and the melody expressif over the accompanying figures of the other strings in pp: 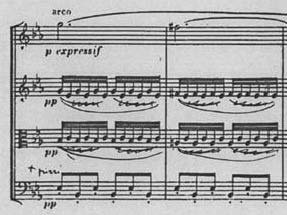 Ulrich Krämer, the editor of our string quartet edition, decided to adopt the correction from C1 as the most likely variant, but the version in C2 (with dynamics downgraded only in the middle parts) can be ruled out just as little as the deliberate deletion of the C1/C2 dynamics corrections in the no longer extant proofs of the new issue (then the pp for the 2nd violin would only remain in the parts by mistake).

Such unexplained questions also arise, of course, with other composers, but in an intensified form with Debussy in that he was never really able to complete work on some of his compositions. On the validity of partially contradictory corrections in his orchestra work Nocturnes, he is supposed to have said that they are “different possibilities” that one can select at one’s discretion…

One Response to »Debussy in Urtext – Part 4: Autograph corrections in chamber-music works«