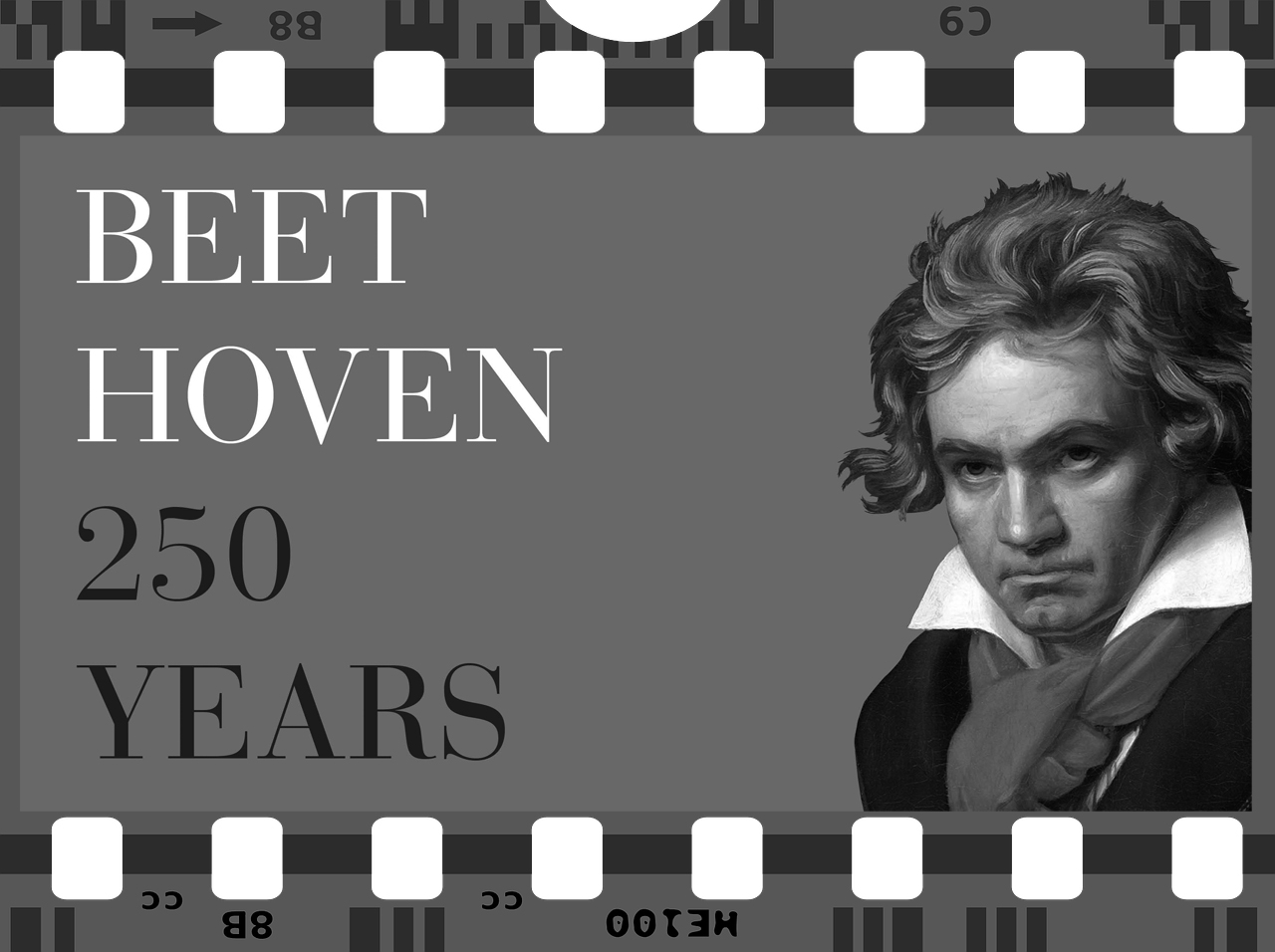 I can still very clearly remember how upset and outraged I was about the Mozart film “Amadeus” that came out in 1984. This was by no means the Mozart I had imagined. His infantile behaviour, his stupid laughter, his constant hypermania: no, that had nothing to do with “my” Mozart. Today, I’m much more laid-back, yes – I’m even touched when I myself  “can be in the thick of it”, when “Salieri” hears an excerpt of Mozart’s Gran Partita for the first time and immediately recognises his own mediocrity, or when to “Salieri”, “Mozart”, drenched in sweat on his deathbed, is dictating parts of his requiem, knowing that he’s soon to die – and I am shocked to witness this event.  Almost always, when Mozart’s music is played in this “Amadeus” movie, and its tremendous emotional power is reflected in the faces of the actors, my own emotion is provoked and excited, possibly more than with mere, nonpictorial listening. Mirror imaging of our own deep-seated feelings.

And now, Beethoven movies. Let’s just be clear about this: A serious, even scholarly study of Beethoven’s life and works does not ever deal with movies about him at all, but with the many primary documents and sources, usually worked up over decades of research and published in reference editions, most of them from our own publishing house: with the Letters to and from Beethoven, with the numerous Eyewitness Reports, with the Beethoven Works’ Catalogue, with the Conversation Books, with the extant Portraits, and not least, of course, with his entire Compositional Oeuvre. Beethoven movies are, on the other hand, the opportunity to bring specialist knowledge closer to a wider, interested public. Whether they be entertaining feature films, film documentaries (with or without actors) or famous interpreters being videoed about Beethoven’s works and life.

My investigations on YouTube, IMDb, Wikipedia, Amazon and on other online sources revealed a surprisingly large number of such films related to Beethoven. I watched each film (sometimes several times), catalogued it in chronological order (of its release) and ultimately supplied it with a short personal comment and recommendation (of 1-5 stars). So much material has in fact accumulated that I’ve divided the Beethoven “filmography” into the three following categories – there will be a separate blog post for each category. The “filmography” itself is now permanently on our website:
(1) Beethoven movies [10 March 2020]
(2) Beethoven documentaries [20 April 2020]
(3) Famous musicians on interpreting Beethoven [15 June 2020]

Whereas cinema movies (1) naturally focus primarily on entertaining viewers rather than on conveying facts, most film documentaries (2) combine seriously researched and lavishly expanded factual material about Beethoven’s life and works with dramatic elements. And when the great Beethoven interpreters (3) of our time get going on the subject of his work, we are very close to the real thing, the music. I only excluded all films in which Beethoven’s music is just heard as “background music” (such as in “A Clockwork Orange”, “Strings of Life”, “Dancing Beethoven”), or the composer’s name is “taken in vain” (such as in “A Dog Named Beethoven”).

If despite all efforts I have overlooked any Beethoven films, I kindly ask you to let me know.

A composer of Beethoven’s rank, the icon of compositional genius par excellence, is, of course, as a personality more interesting than anyone else. Particularly in Beethoven’s case, there is another attraction factor for the film genre: his biography has more than enough “film material” for the director and his actors, although more drama than comedy. Take, for example, Beethoven’s sad childhood, his rough character, his deafness (Heiligenstadt Testament), his failures (or successes?) with the mostly noble ladies (letter to the “Immortal Beloved”), his obvious contradictions (for example, in relation to the nobility, to Napoleon), his alcohol abuse, the “nephew conflict” (including attempted suicide), his infinite number of illnesses and his relatively early death. Not surprisingly, much of this is constant in every Beethoven movie. Movies aim to entertain and – in the few successful cases – can make viewers curious at the same time about Beethoven’s music, thus stimulating further, more in-depth involvement. Even the (notoriously sceptical) Beethoven connoisseur will be happy to be drawn into the magic of the great moments, with beautiful pictures and great actors in a well-made movie. All moviegoers become brothers, cheer feverishly, look forward to Ludwig within his biographical milieu. Of course, the connoisseur will always view Beethoven films with an analytical eye: which life events, which historical persons, which Beethoven clichés and myths, which music is presented to us, and how?  Quite apart from the question of the reception history, of great interest but not being dealt with in the following, the Beethoven picture presented to us is significant, for ‘the picture we take of the Beethoven artist figure … is also determined by how he is portrayed on the movie screen and how his music is contextualised there’. (Akademie der Wissenschaften und der Literatur Mainz)

And finally: Movies have an unbeatable advantage over all the “dry” sources and books. Because despite of, no, precisely because of its simplification and streamlining of actual facts, it appears more immediate and emotional. We have to react spontaneously, with either disgust or admiration. Cold indifference is virtually out of the question. However we may privately have imagined “our own Beethoven” as a person – in the film his person becomes absolutely tangible. And let us by no means forget the tremendous emotional force of his music as heard!  It is not about a concert or CD experience, but about the subtle or superficial support of Beethoven’s (and others’) music to deepen the “whole Beethoven effect”. This “effect”, of course, cannot be missed, especially by a film director. No Beethoven movie without the beginnings of the “Moonlight Sonata”, the “Pathétique” (slow movement), the “Fifth” and the “Ninth”….

But view it for yourself: (1) Beethoven movies

3 Responses to »Beethoven in film. A complete overview in three parts«