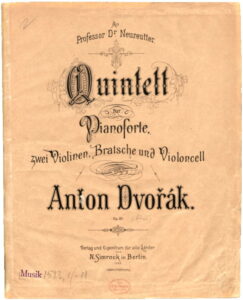 The piano quintet is, so to speak, in the “super heavyweight class” amongst chamber-music ensembles: the piano’s powerful sonority encounters an equal partner in the string quartet itself, already constituting an independent ensemble in its own right. This combination offers a wide palette of timbres that allows an enormous dynamic range, progressing from intimate duets to nearly symphonic scope.

It’s no wonder that Romantic composers, in particular, felt attracted by this expressive scoring and composed between 1842 and 1887 four of the most important works for piano quintet: Robert Schumann’s op. 44 in E-flat major, Johannes Brahms’s op. 34 in f minor, César Franck’s in f minor, and, finally, Antonín Dvořák’s op. 81 in A major. Schubert’s “Trout Quintet” should also be mentioned as a distant relative, though with its lighter tone, five movements and divergent scoring with double bass instead of second violin, it is to be seen as falling rather more within the tradition of Viennese serenade music.

Dvořák’s contribution to the genre is especially loved by listeners and musicians alike, combining, as it does, melodic riches and immediately appealing ideas with musical depth and masterly formal design. Since Antonín Čubr’s commendable contribution to the Dvořák Complete Edition in 1955, no critical edition of the op. 81 quintet had nevertheless appeared to this day. So, after 66 years it was high time for us to take a fresh look at the sources, the more so as sensationally showing up in Italy just a few years ago was an unknown source:  a complete autograph continuity sketch in short-score form,

begun, according to the manuscript dates, on 16 August and finished on 3 October 1887, “at a nice little hour” in Dvořák’s rural summer residence Vysoká.

This manuscript is owned today by Matthew Malerich, Bakersfield, California, who kindly allowed us to examine the source. We are very grateful to him for also permitting us to display two pages of this source here in this blog post: 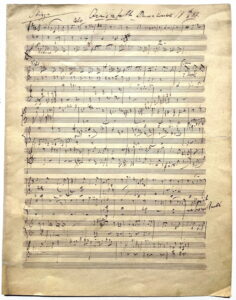 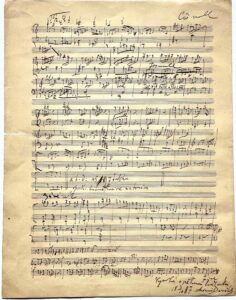 So what’s new now in our edition (HN 1233)? I’d like to introduce the following selected finds.

In the first movement, m. 25 of the 2nd violin, there is a noteworthy pitch difference between the first edition authorised by Dvořák (published in 1888 by Simrock in Berlin) and the autograph (which, however, did not directly serve as engraver’s model for the first edition). Whereas the last note in the autograph is a2, it is changed to g2 in the printed edition, though interestingly enough, not in the identical, repeated phrase in m. 27: 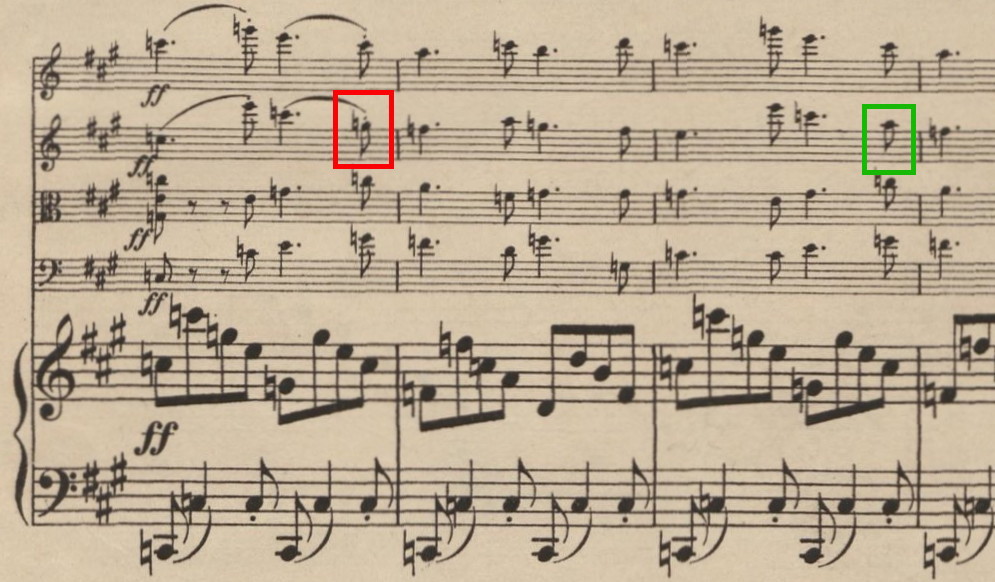 The g2 admittedly fits better in the C-major harmony, and since a natural sign has also been added, it rules out here merely an engraver’s mistake. But if Dvořák intended the correction, why didn’t he change the pitch in m. 27?  And, incidentally, why not also in the parallel passage, mm. 235–237, faithfully repeated to the very note (simply transposed here a semitone lower): 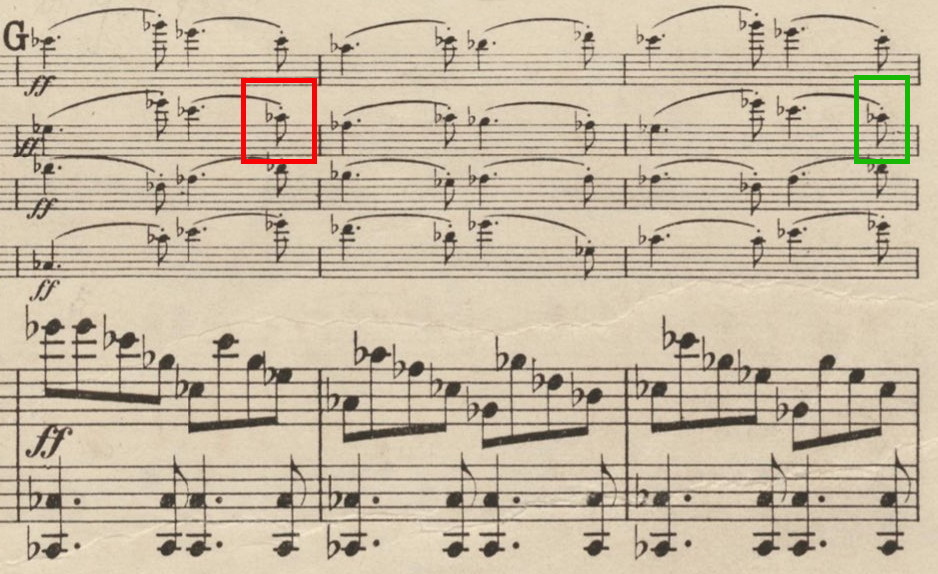 Was Dvořák really supposed to have overlooked all three analogous passages? It is conceivable, alternatively, that the g2 is based on an oversight: the autograph shows that the notehead was redrawn by Dvořák in red ink – in my opinion, only to make a2 more precise, not to correct it to g2 (lacking the natural sign). The copyist of the engraver’s model could nevertheless have interpreted it as g2 and added the absolutely harmonically requisite accidental himself. Since today the engraver’s model is lost, this remains pure speculation.

Owing to the uncertain situation, we have not attempted to standardise it there in our edition: we leave the solitary g2 in m. 25 as in the first edition and suggest the circumstances with a footnote so that musicians can decide for themselves whether to play it as printed or reconcile it in one direction or the other. Antonín Čubr chose a Solomonic compromise in his edition: measure 27 was tacitly adjusted to measure 25, but the parallel passage at mm. 235–237 was left unaltered….

In the second movement, the elegiac Dumka, reference is to be made to a violin 1 measure that clearly contains an incorrect rhythm in all sources and previous editions. In the Vivace middle section, violins 1 and 2 consistently play a longer passage from mm. 152–167 unisono (at the interval of an octave) – only in m. 160 does violin 1 unexpectedly go its own way: 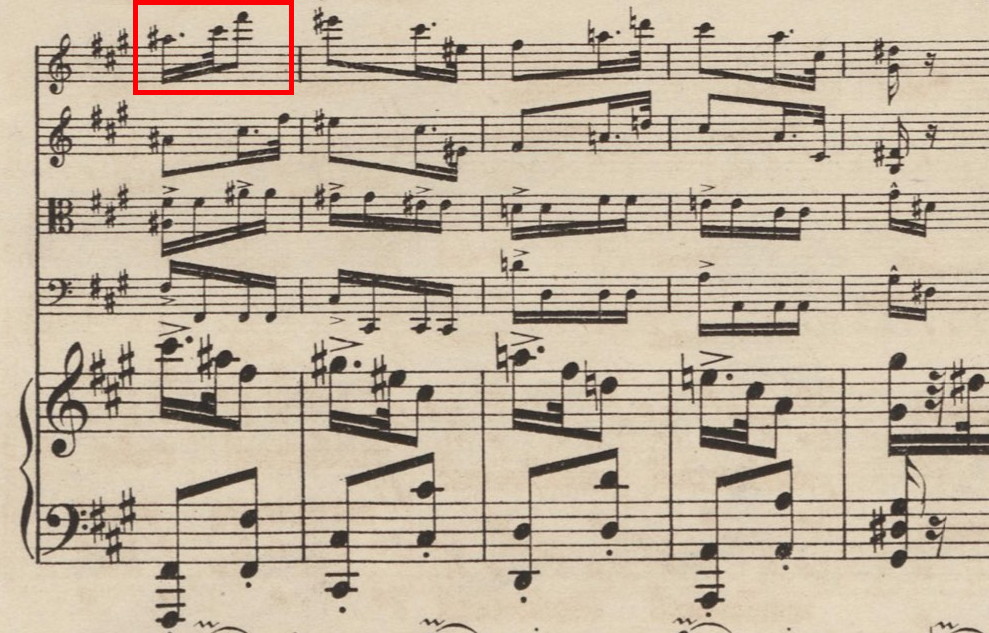 This of course makes little musical sense, and a glance at the autographs shows that it is certainly just Dvořák’s writing error; the violin 1 & 2 notes are exactly below each other (see the red lines) and the same rhythm is meant:

The composer may still have had the shifted (right hand) piano rhythm in his head? Two measures later, incidentally, the same mistake almost occurred again: there he had already set the prolongation dot after the 1st note (see arrow), but then notated the beaming correctly. In our edition we have therefore decided to adjust the measure rhythmically, with a relevant footnote: 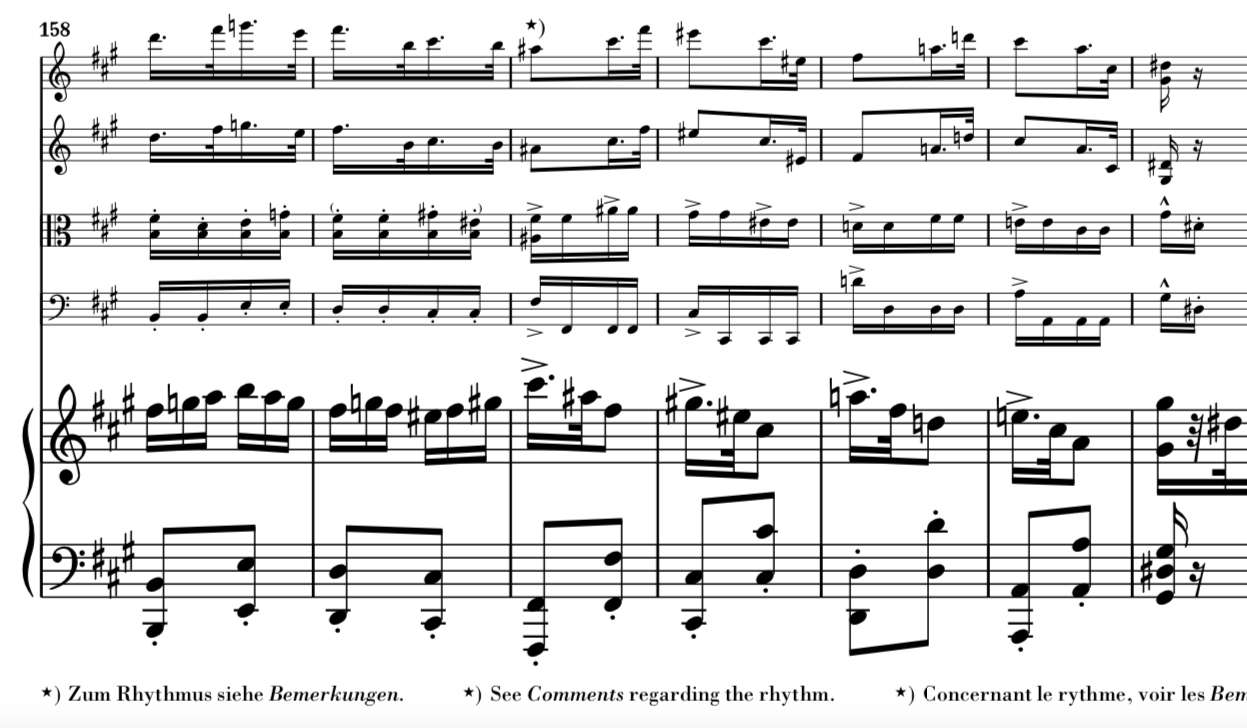 By precisely comparing the first edition with the autograph, we were on the whole able to track down a number of greater and lesser engraving errors and to correct them in our edition, mentioning as an example just this wrong c sharp1 in m. 272 of the final movement: 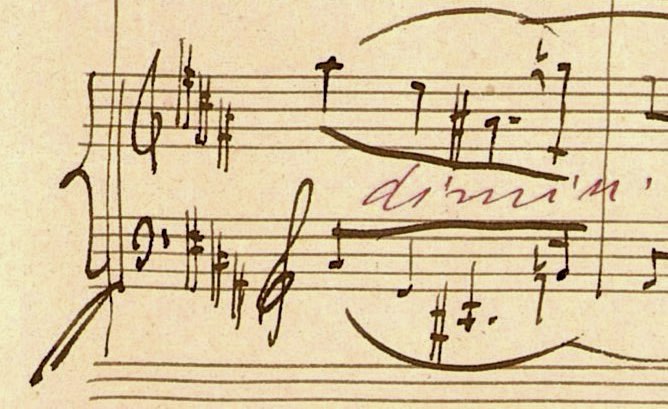 Surprisingly enough, though, it was in the cross-comparison of different issues of the Simrock edition where we made perhaps the most important discovery. All reprints published after Dvořák’s death, from ca. 1909 (when the so-called “Volksausgabe” appeared in a smaller format), do in fact contain a dozen additional tempo and performance indications as well as fingerings in the piano and even small interventions in the music text itself.  So, for instance, even the aforementioned erroneous note in the 4th movement has been “corrected”, though in the reverse direction owing to ignorance of the autograph, so that now the wrong c sharp was in both hands:

In the first movement, furthermore, in m. 175 of the piano, freely added is a flat sign before the 3rd note, which cannot be found in either the autograph or the early editions – also an “improvement” for the worse, because the characteristic semitone step between the 3rd and 4th notes is correct and occurs in all analogous figures in mm. 173–178: 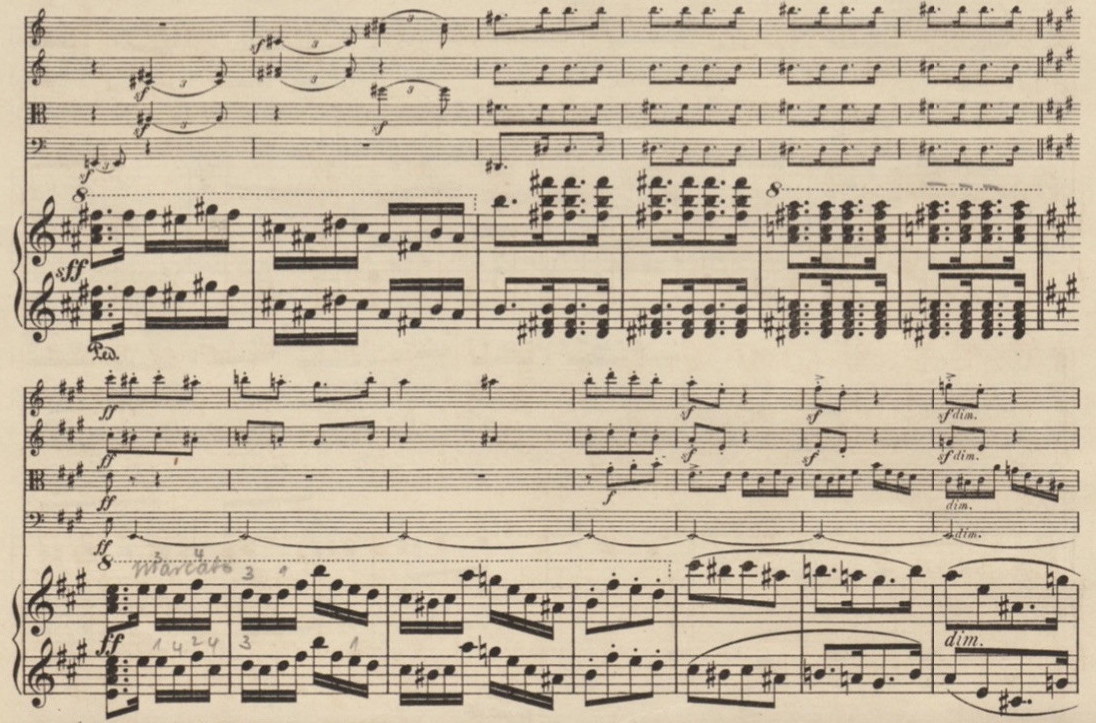 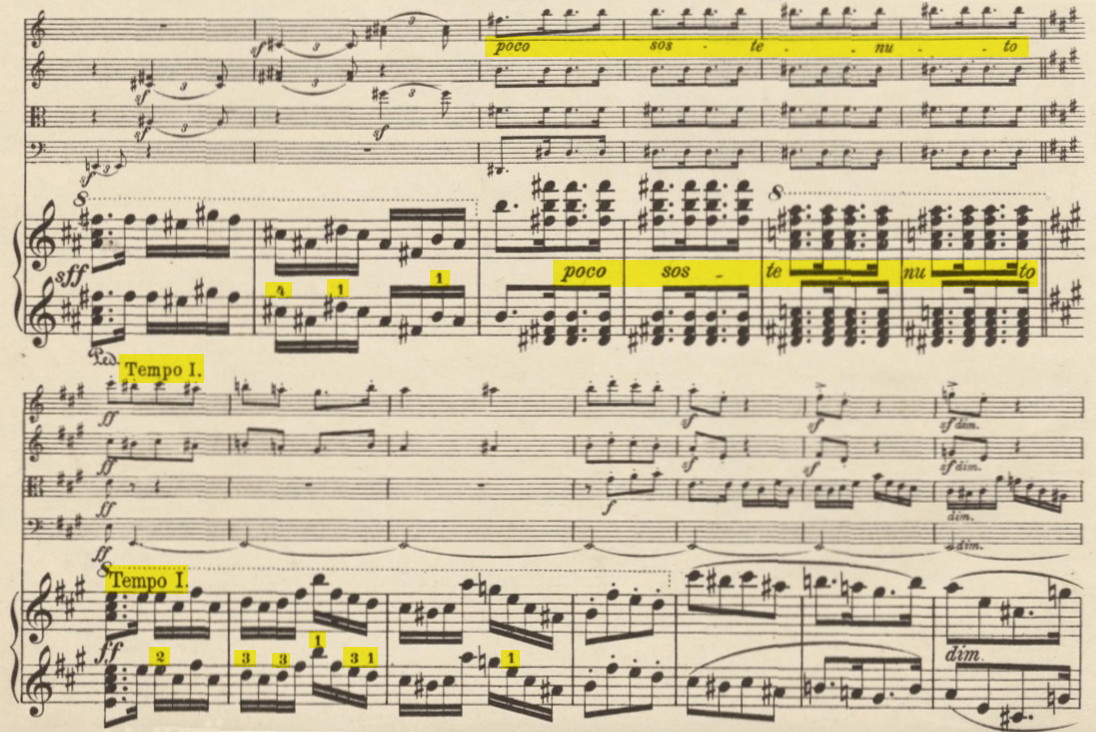 Where did these changes come from? Certainly not from the composer, who had died in 1904 and for whom such an approach would not have been at all typical. I personally suspect the pianist and arranger A[ugust?] Schultz, who arranged the op. 81 quintet as a version for two pianos and had it published by Simrock in 1905, ironically exactly a year after Dvořák’s death – perhaps because the composer could no longer protest…? To be found in Schultz’s arrangement are already precisely the same piano fingerings, note changes and tempo additions that were then adopted, probably as well-intentioned “improvements”, in the popular 1909 edition and the reprints of the original edition: 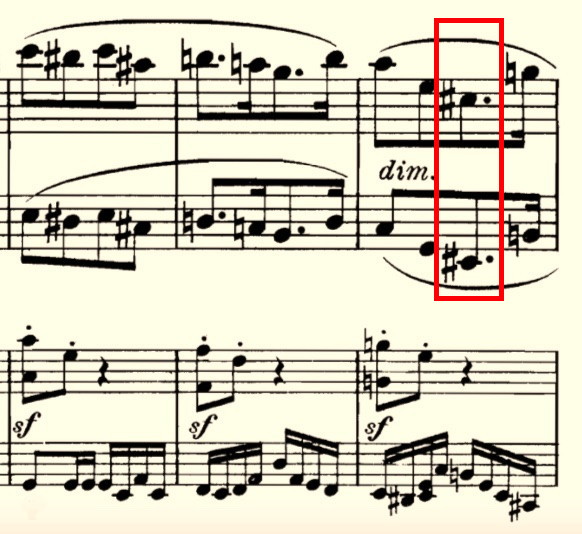 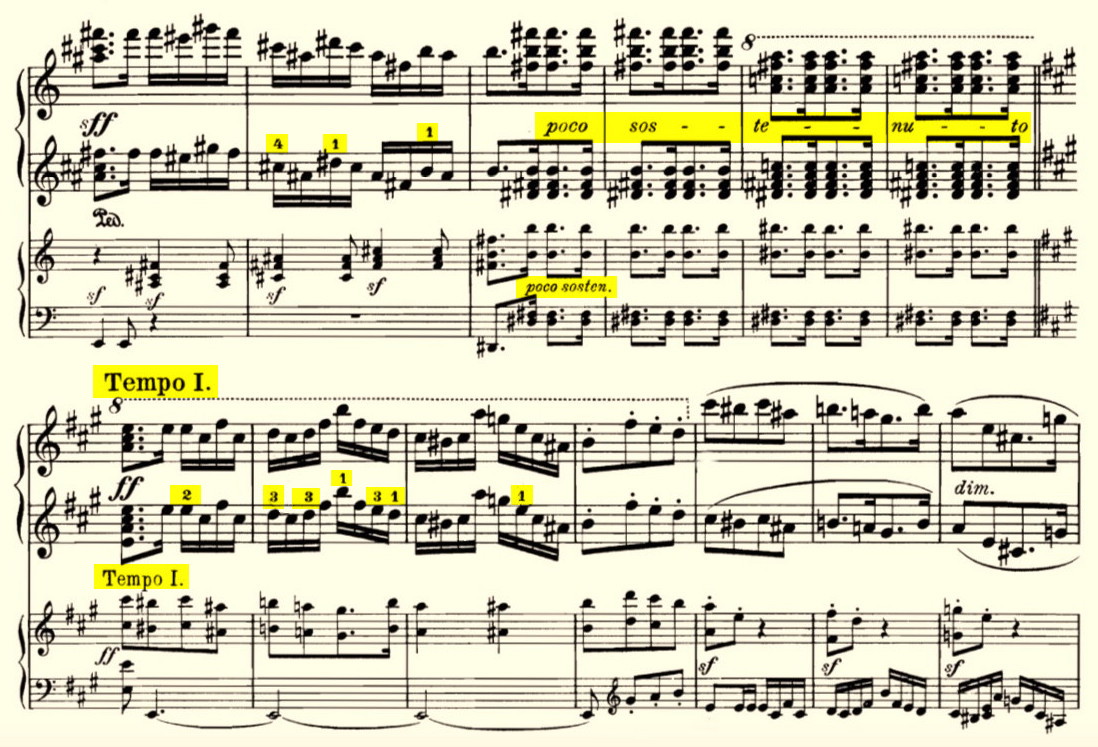 Unfortunately, the edition in the 1955 Complete Edition is also based on a posthumous issue of the Simrock edition, so the unauthorised tempo additions can still be found in all editions available today on the market – except, of course, for our new edition, going back to the original 1888 text and offering musicians an optimal basis in the future, we hope, for interpreting this immortal masterpiece!