Posted on October 31, 2022 by Annette Oppermann 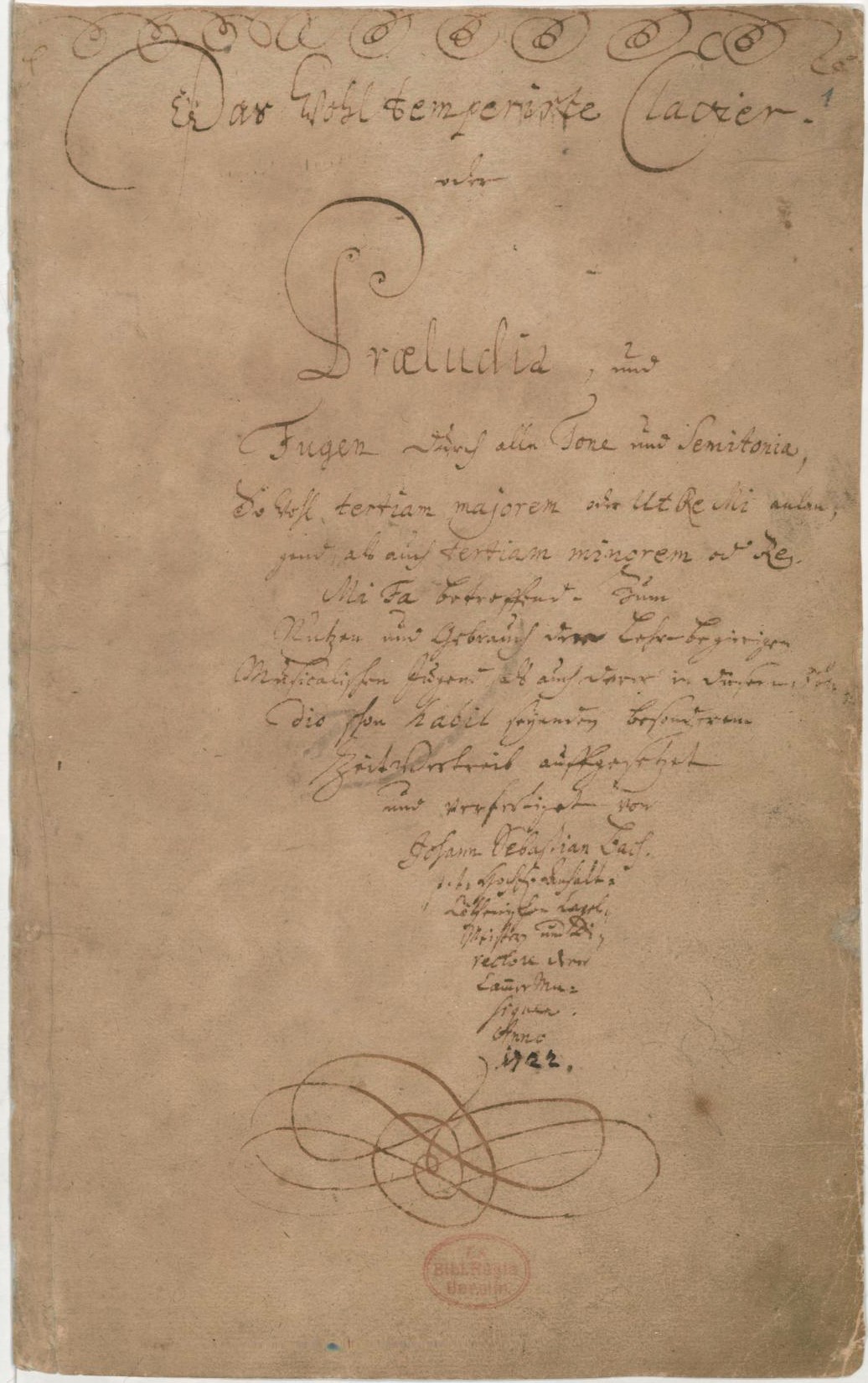 2022 seems to be particularly rich in musical anniversaries: Even if for obvious reasons we let the notable birthdays of a John Williams or Elton John pass uncelebrated in this forum, the palette of our tributes this year already ranges from Kuhnau through Brahms and Franck to Alexander Scriabin. No doubt about it, all these composers have left a legacy of weighty works and occupy central positions in the Henle catalogue. But the jubilarian of today’s blog post puts them all in the shade: Johann Sebastian Bach’s Well-Tempered Clavier Part I! This collection of 24 preludes and fugues, recorded by Bach in 1722 in an accurate fair copy with an elaborate title page, stating “…for the use and benefit of inquisitive young musicians…and of those already well-versed in this study…”, accompanies practically everyone who has ever approached the piano for 300 years now. And, its history is just as eventful – also in the Henle publishing house, where it has now engaged us for over 70 years.

But back to the year 1722: With his collection of “Praeludia und Fugen durch alle Tone und Semitonia” (Preludes and Fugues through all Tones and Semitones), readily abbreviated as WTC I in present-day professional circles, Bach was then reacting to efforts to achieve the tempered tuning of keyboard instruments still valid today, in which all the keys would sound equally good and could be played without any retuning. Intended both as practice material for acquiring pianistic skills and as a collection of examples for creatively penetrating counterpoint, the collection was initially addressed to Bach’s own pupils and children. Numerous still extant copies by his pupils and by their pupils, in turn, attest to the work’s widespread and lasting circulation during the composer’s lifetime. But even afterwards, the WTC I – unlike many other compositions by the Thomaskantor – was not to fade into obscurity: To be found around the middle of the 18th century are copies offered in sales catalogues. Authors such as Friedrich Marpurg or Johann Philipp Kirnberger printed excerpts from it in their writings on music theory. Collectors such as Gottfried van Swieten included it in their libraries where the next generation of composers could study it – as impressively evidenced by copies, adaptations or epistolary statements by a Wolfgang Amadé Mozart or Ludwig van Beethoven. 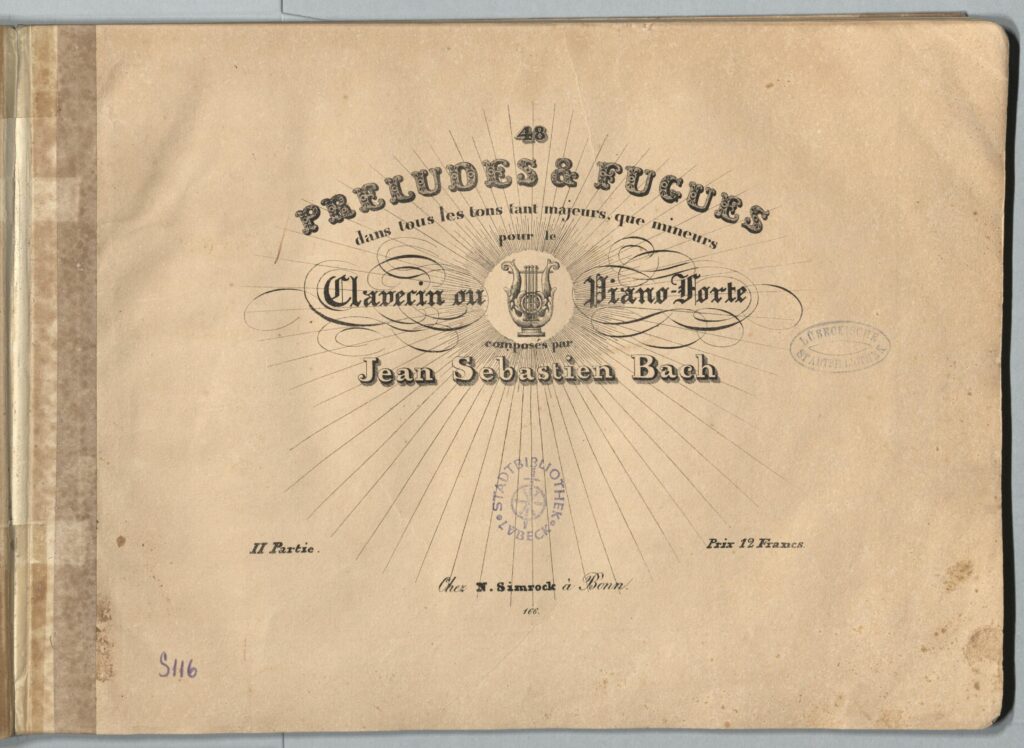 Whilst compiling Oeuvres completes of the piano works of Mozart or Haydn, brought out by various publishing houses in serial collections from the mid-1790s onwards, publishing interest also turned to Bach. Around 1800, three firms – Hans Georg Nägeli (Zurich), Nikolaus Simrock (Bonn) and the Bureau de Musique Hoffmeister & Kühnel (Vienna/Leipzig) – published in direct competition editions of the WTC I. These first prints were to be followed in the 19th century by a veritable flood of editions, with practically every self-respecting publishing house having (at least) one in its programme. In view of the collection’s pedagogical importance, more and more pianists found themselves supplementing those parameters not established by Bach in his inscription, such as tempo, dynamics, fingering or phrasing, in editions specifically “designated for the praxis”. Carl Czerny’s edition, published in 1837 by Peters in Leipzig, stood at the outset of this “instructive editions” tradition that was to be enriched with ever increasing information on the performance and comprehension of the work during the second half of the 19th century by pianists and composers such as Carl Reinecke, Robert Franz or Ferruccio Busoni. 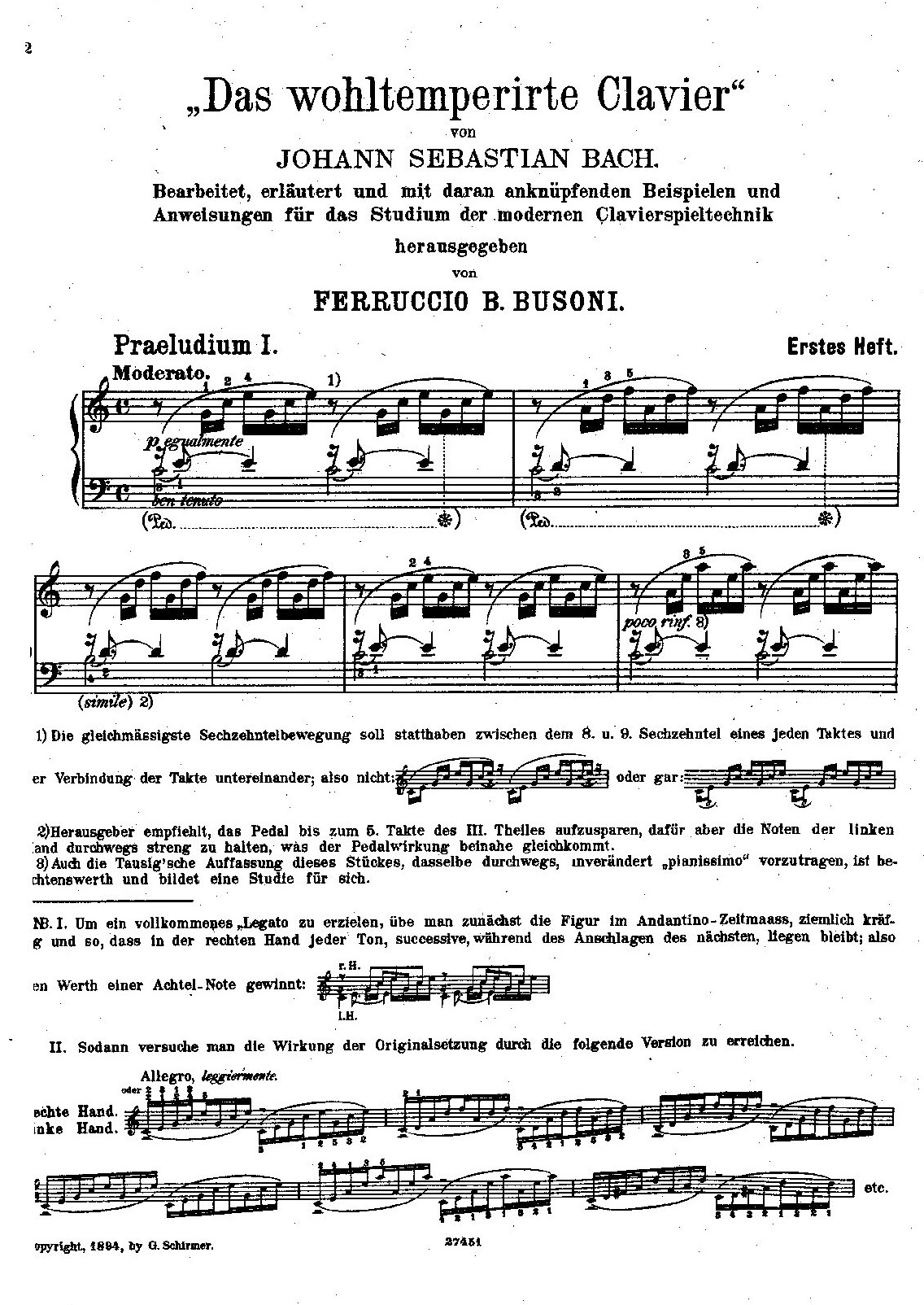 In these editions it was obviously sometimes no longer quite clear in the music text what actually came from Bach and what from the editor – leading to the inevitable reaction that we associate today with the term Urtext. Thus, as early as 1862, Franz Kroll presented Peters with a music text, free of (almost) all additions, that also formed the basis of his edition for the Alte Bach-Gesamtausgabe (Old Bach Complete Edition), still considered today a milestone in Bach research. Further (more or less) text-critical editions by other publishers followed, always accompanied, of course, by the instructive editions that were so well received by the general public and remained on the market for generations.

As is well known, precisely these designated editions were one of the central motivations for Günter Henle’s founding of a publishing house in 1948 to focus exclusively on Urtext. And here, too, the WTC I was and still is of great importance: Published in 1950, it is included  amongst the first 10 titles in the Henle catalogue alongside piano works by Mozart, Beethoven and Schubert – and is still one of the publishing house’s bestsellers. Otto von Irmer opened the preface to his edition with the programmatic statement:

This edition, which is based on original autographs, restores to “Das Wohltemperierte Klavier” (“The well-tempered Clavier”) the freedom of interpretation that Bach desired. For he never indicated tempo or dynamics but allowed both to develop freely from the inner content of the work. Any editorial additions of this kind would stultify the work and make it impossible to penetrate to the real essence of Bach’s music. 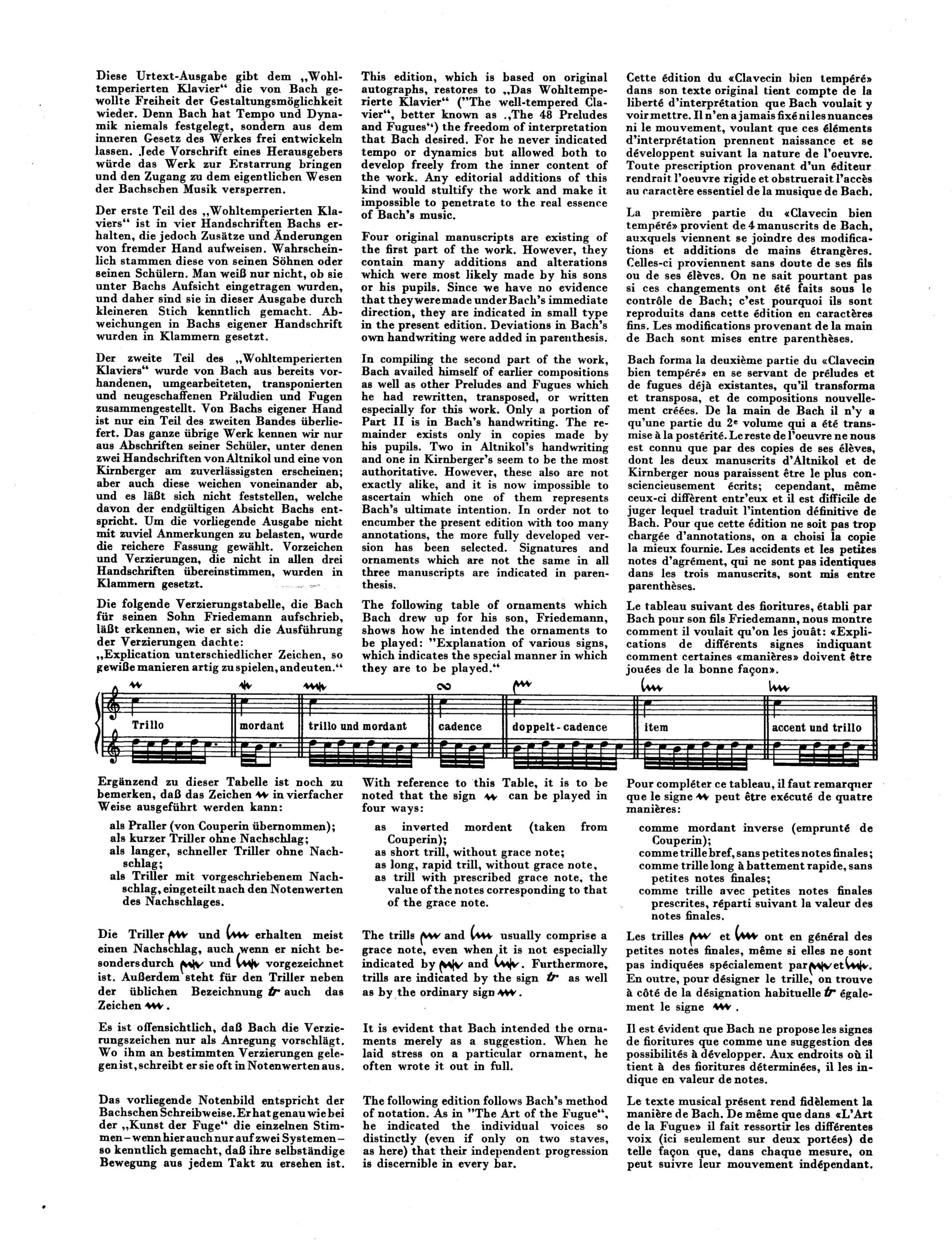 Determining this pure Urtext from the work’s broad manuscript tradition was admittedly no easy task. For in three copies not only the contents of the collection but also Bach’s handwriting was copied so well that the manuscripts were later erroneously assessed as other autograph manuscripts. So, until the 1950s, four autographs of WTC I were still assumed, with a large number of supposedly authorised variants extant that posed editorial problems of chronological classification and evaluation.

Correspondence between the editor and Günter Henle, filling several folders in the publishing-house archives, documents that the critical examination of the sources during ongoing consideration of current Bach research continued even after the edition’s publication and was supported by external advisers. The latest findings were incorporated within each new issue of the WTC I: Assumed then in 1960, for example, was only one autograph, which was privileged as the “most reliable source” for the variants. On the other hand, more ornaments were included from Bach’s direct milieu via his pupils’ transcriptions, giving important clues to this music’s contemporary performance practice.

The text was repeatedly put to the test internally up to 1997, when the time was deemed ripe for a fundamental revision of the edition: Based on numerous new Bach research findings, editor Ernst-Günter Heinemann once again re-examined all the sources to present a new edition with a preface providing for the first time a detailed evaluation of the tradition and a commentary classifying the variants by the work’s different revision stages. At that time, the current issue of the Irmer edition served as the engraver’s model for the new edition. Whilst the main music text remained virtually unaltered, the ornaments and variants were in great need of correction to bring the WTC I up to the current state of research – as is to be expected of the Henle Verlag’s Urtext editions. 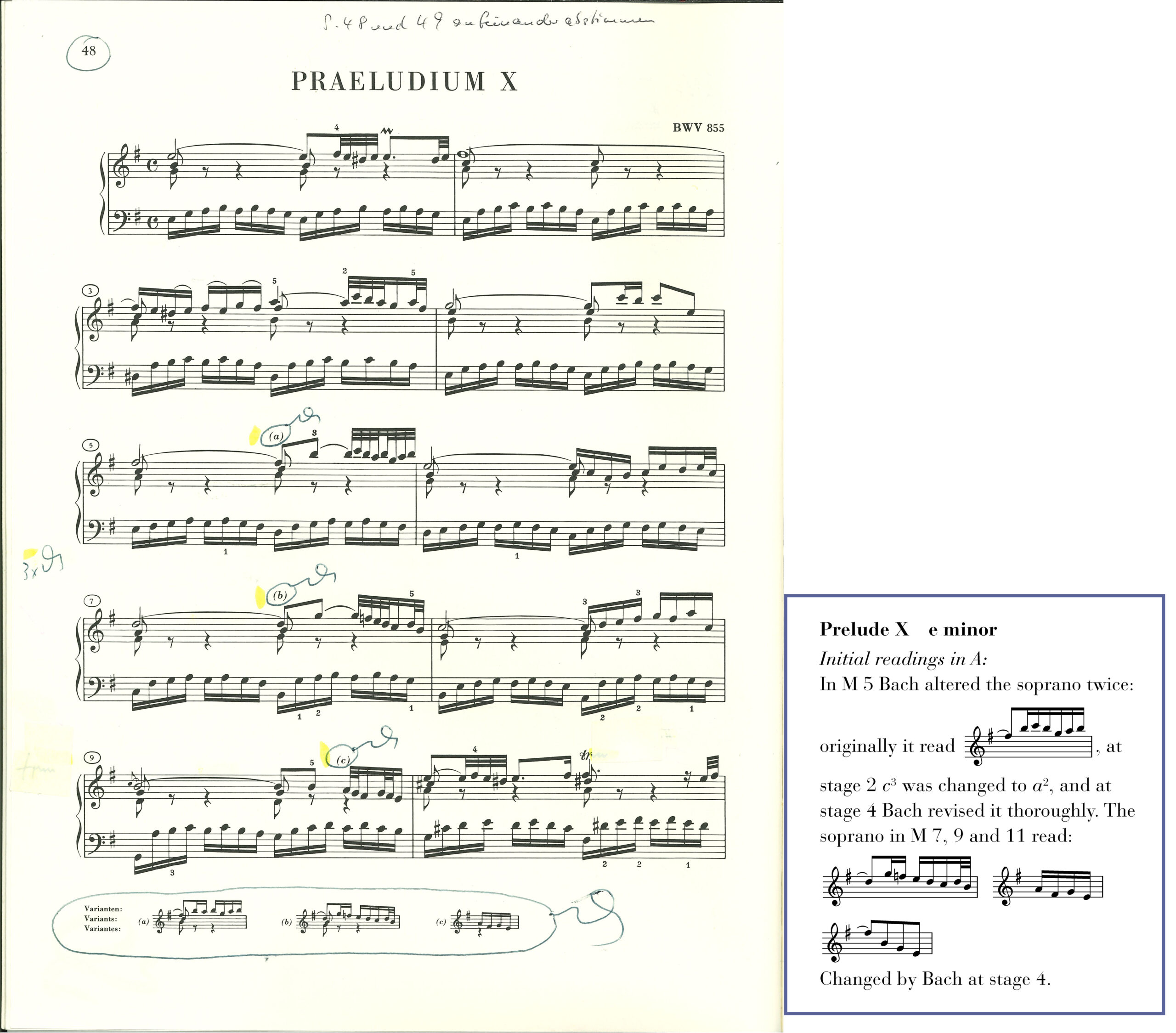 The extensive correspondence amongst pianist, publishing-house director Wolf-Dieter Seiffert and editor Ernst-Günter Heinemann gives to this very day an insight into how intensively every detail was discussed before the edition’s publication. The execution, for example, of the intricate arpeggio at the end of the D minor fugue (mm. 25f.) was apparently discussed one evening, but not written down – which is why Wolf-Dieter Seiffert then asked maestro Schiff by email for ‘a “Bach autograph” from your hand’ that would clarify the situation. 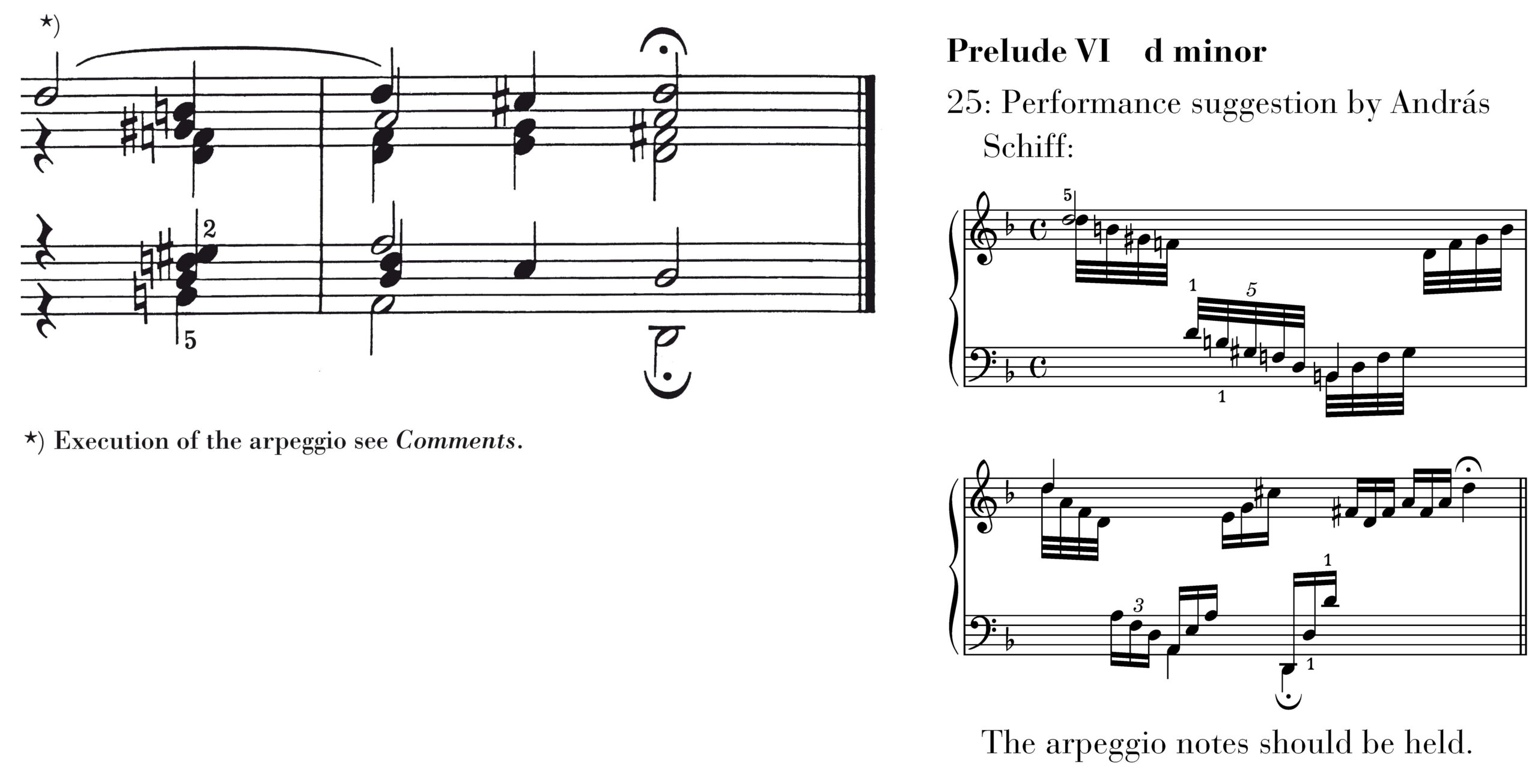 […this is my association. To articulate that you must not change the finger for the tone repetitions.]

Well, does this pique your curiosity about our jubilarian WTC I? Then why not find out more about this interpretation in our edition by the great Bach interpreter… or just sit back and listen to its wonderful complete performance by András Schiff.